Are these reground cams scrap?

I got this pair of cams with a load of parts.

It seems they ground the heel, and in the case of one lobe did so excessively.

I’ve read that when the heel is ground, it’s unlikely you will find shims to achieve correct clearance. 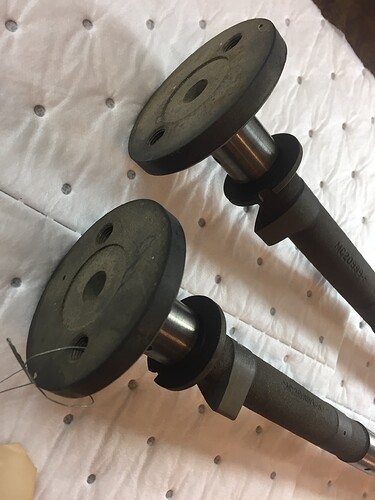 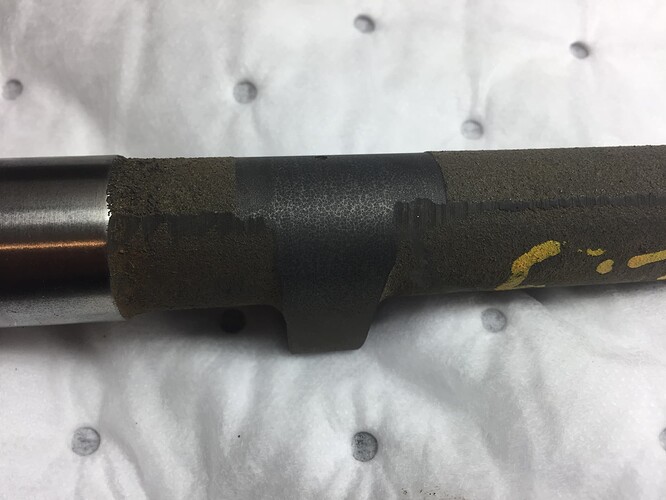 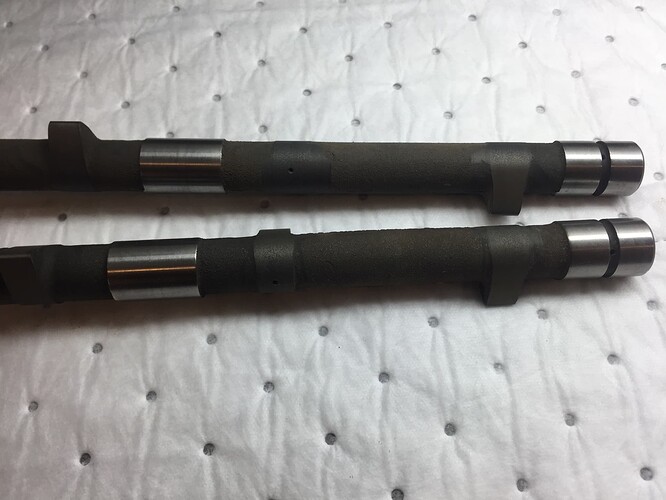 I think right around .420 lift regrinds require additional clearance between the guide and collets/retainer.
Isky was regrinding Jag cams for years. Might be one of their versions. Terry’s WAD regrind doesn’t disclose lift in an out of date catalogue I have.

Any ID numbers stamped in beside the Jag OE?

I have a pair of reground cams on the shelf that look a lot like those. I’ll mic the lobes later today and let you know what I find.

Obviously , they grind the heel to reduce the base circle to get more lift, knowing that they may have to make custom shims. Not only is this much cheaper than casting a new cam blank or machining one from a billet, cams with higher lift on the stock base circle will require larger diameter tappet, as well as some grinding on the head for lobe clearance.

For comparison, here are a different pair that were ground by Dema Elgin. I’ll have to pull up the spec card, but they are roughly equivalent to D-type cams. Edit: (They were ground on 4-bolt XJ6 donors) 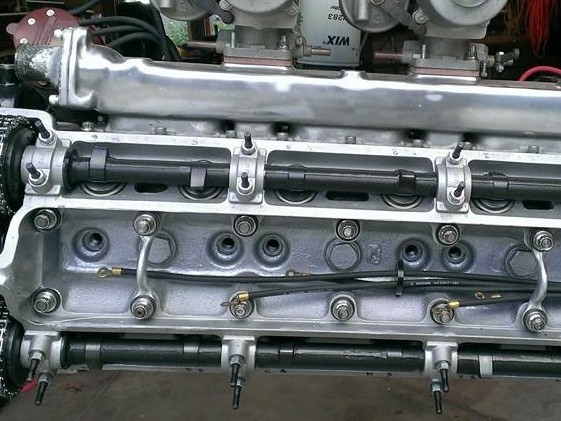 They could be used, but it would take further machining of the base circle area, of the tops of the tappet guides (to possibly accommodate the higher lobe corners) and special tappets/pads.

the tops of the tappet guides, and special tappets

Standard tappets should be OK, so long as they only reduced the base circle, eh?

I once bought a new pair of XK cams from Jason Len that were ground on new steel billets by Kent Cams in the UK. I forget what the lift was, but it was substantial. Lason warned me they would require other modifications. He was right!

I’d have to look at the pictures again, but on one of the pictures of the cams, where the base circle had gone into the diameter of the shaft itself looked like it wasn’t wide enough to clear the tappet.

Aha. I see what you mean.

It would have to be more clearance than provided by the shim. 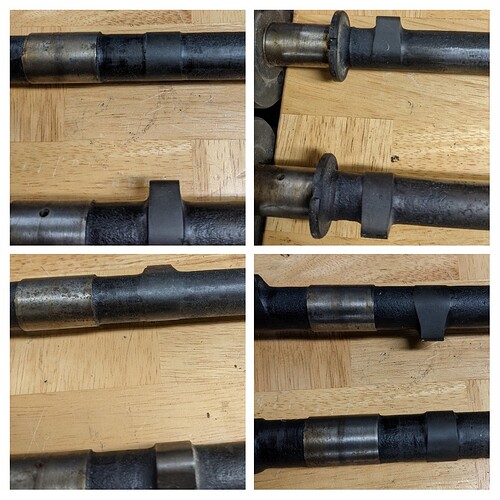 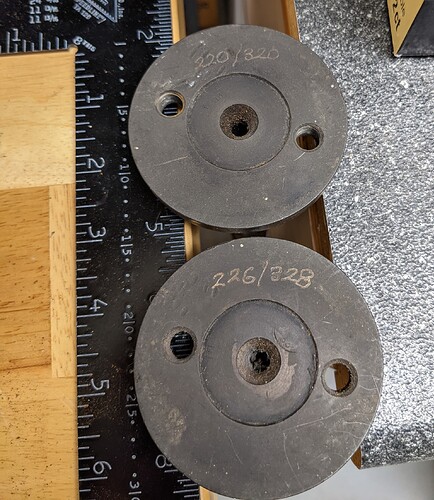 Yeah, the top lobe in the bottom left picture is just on the verge of hitting the shaft itself! So what kind of tappets did you end up using to make those work?

Never used these. Still sitting on the shelf. I sold the billet Kent cams. The Dema Elgin cams worked with the standard tappet.

I’m not a part number expert but the lifts quoted above seem odd.

Meanwhile, no amount of base circle grinding would ever need bigger diameter tappets/guides.

for some time, I have been interested to find what new cam lobe spec dimensions are, for the cams, especially C2237, C2444 (so far, on data collected is 1.360): and C5717 , C5718 (so far 1.425) This from what I have collected from some measurements from several on the forum . I find in the Factory info, only the round off lobe dimension of 1.0 inch, plus-minus a little, tho nearly all measured show 1.04. Interested in the back of cam (opposite lobe) to lobe tip. Knowing this would allow measurement of a used cam to determine variance from new spec. Realizing that this would not speak to duration due to lobe shape.
Nick

Yes, I agree. What you are doing when you reduce the base circle is giving yourself the room to reprofile the normally very pointed nose of the cam into something more blunt, increasing the amount of time, or duration, that valve is open at full lift. If you are starting with standard cams, the total lift doesn’t change much when reground. 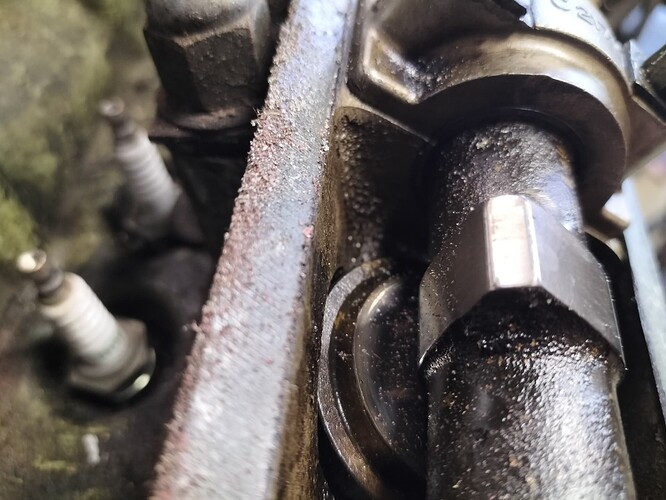 Modified cams are normally measured with a checking clearance as defined by the cam grinder - often 0.050”. By having an abnormally large clearance, you avoid the variability that often occurs just when the base circle transitions into the lift flanks. This is AFAIK the point that is hardest to replicate perfectly on every cam, so if you used zero clearance or narrow running clearances, every tiny bit of that almost inevitable variability would translate into a slightly different lift curve for every valve.

Though imprecise, such variable lift patterns differ only by a very few degrees at points in the overall sequence where the actual lift is miniscule and therefore has hardly any effect on gas flow. Reground cans normally operate with larger than stock running clearances to to minimise the variability. So running Jaguar parabolic cams designed for 12-14 thou clearances (IIRC) at, say, 8-10 thou wouldn’t gain much but might affect idle vacuum and smooth running. Jaguar wanted smooth quiet engines in all their cars and specified their valve gear to meet those criteria.