So today it was quite warm here in NE Ohio and I was able to work up the enthusiasm to go out and work on my problem with removing the dash from my car with the no heat issue.
After once again pulling the instrument cluster back out and fiddling around trying to peer through the little openings I had when I pushed the center vent doors open I found that one of the fallen defrost doors had moved out of the heater box.
It somehow had magically slid out of the way and moved to the outside edge of the dash so it was no longer blocking the dash from pulling out of the car.
However the other defrost door was still dropped down in the heater box and was still in a position where it was an obstruction to pulling the dash out.
So I got to looking around and saw some additional screws in the dash just outside of the area covering the heater box.

Once I removed these two screws on each side (for a total of four screws) I discovered the center vent door assembly that I had been struggling to reach through was now detached from the back side of the dash.
I was then able to move this around a little bit and get better access with my fingers to reach the fallen defrost door. Once I moved that fallen defrost door up out of the heater box, I was then able to EASILY pull the dash out of the car.
YAHOO!

BTW, for anyone else who may be contemplating this same job, it would be VERY difficult to get the center vent door assembly back into place after removing these screws if you are not going to pull the dash out of the car afterwards.
I.E. It is only possible to correctly position the center vent assembly back into the proper spot and put these four screws back into place when the dash is out of the car and flipped upside down.
So if you are not intending on removing the dash I would strongly advise you not to remove these screws.

Now that I have the dash out of the car and flipped over I can see what has gone wrong with these defrost doors that had been obstructing the movement of the dash.
BOTH defrost doors are broken away from the vacuum pots that are supposed to actuate them in EXACTLY the same manner. 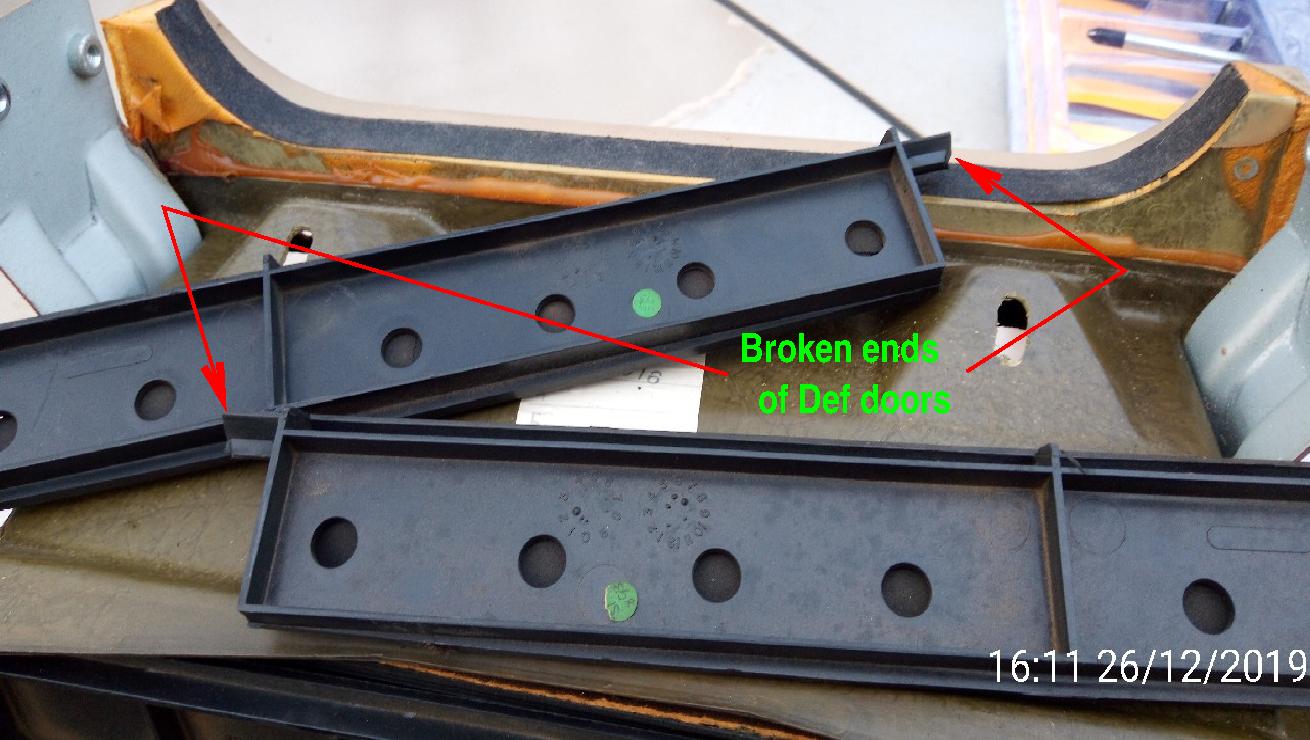 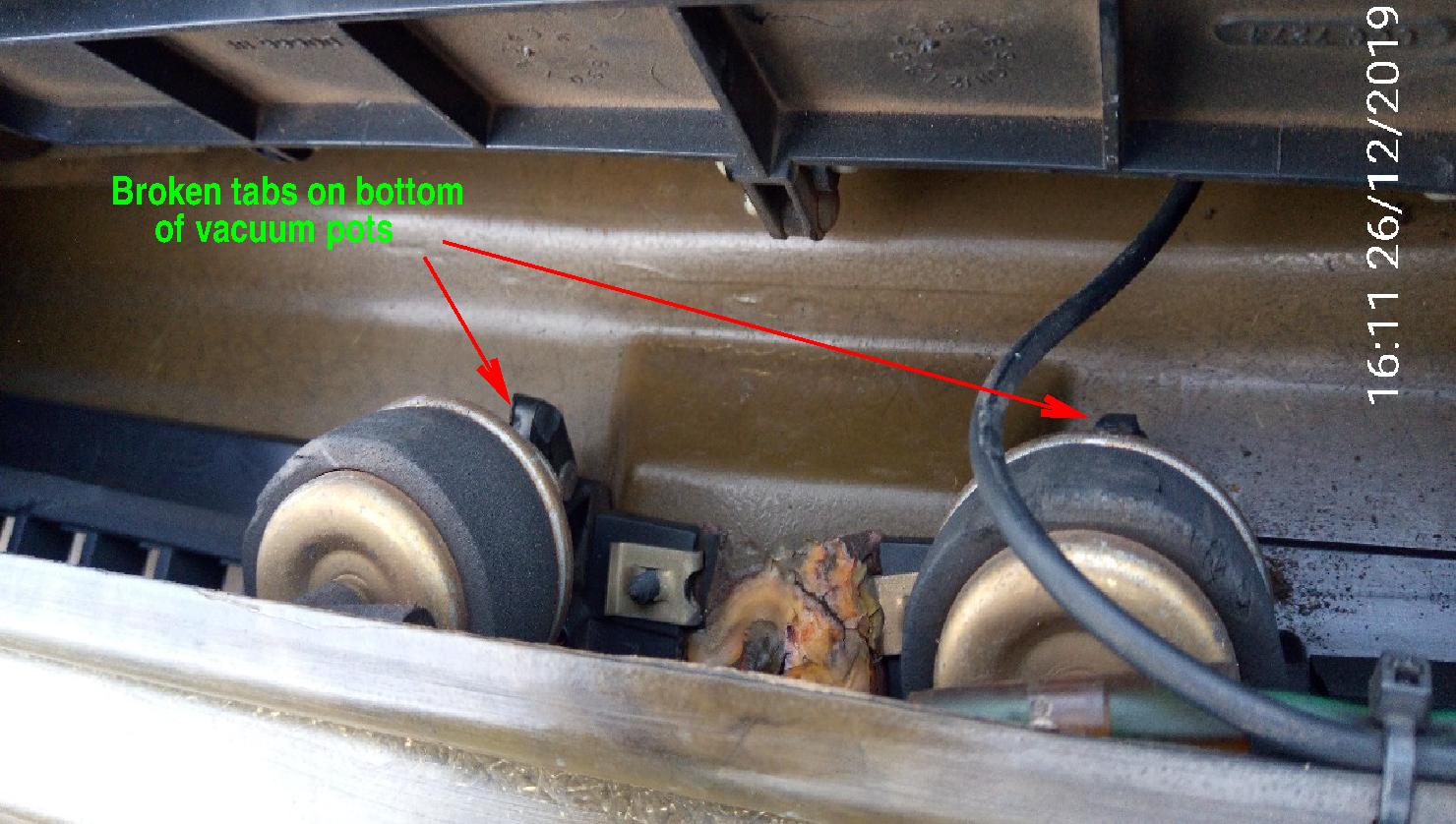 After I got this great progress made, I put the dash and instrument cluster back into the car so I could continue to drive it around.

BTW, for anyone who has a large high resolution monitor and is interested in seeing the full the original full size photos instead of these reduced size pictures, I can provide those.

Thanks for the pictures Steven. Which side of the flaps have the broken pivot points? The outside that’s closer to the tweeters or the inner sides that’s closer to the center of the dash? If I remember correctly the inner pivot point of the flaps broke in my case next to the vacuum solenoids. I drilled a hole where the orig. pivot point was and inserted a bolt in the hole and attached it with Loctite PL 3X adhesive. So I basically made a new pivot arm. But they still make a noise every time I start my car and the flaps close. Gotta pull the dash out again and see what’s hitting what.

Joe:
The inner part of the flaps does not actually have a pivot. There is a direct attachment to the vacuum pots in the center of the dash. It is a weak point in the plastic flap that commonly breaks right at the point where it attaches to the vacuum pot.

I remember when I fixed those pivot points of the flaps, they worked when I applied vacuum to them. At that point the were out of the car, I was holding them in my hand when I tested them. They still close and open but make a noise by hitting something.
Btw, if you wanna place a foam on the center flap, this would be the best time when you remove the dash the next time. 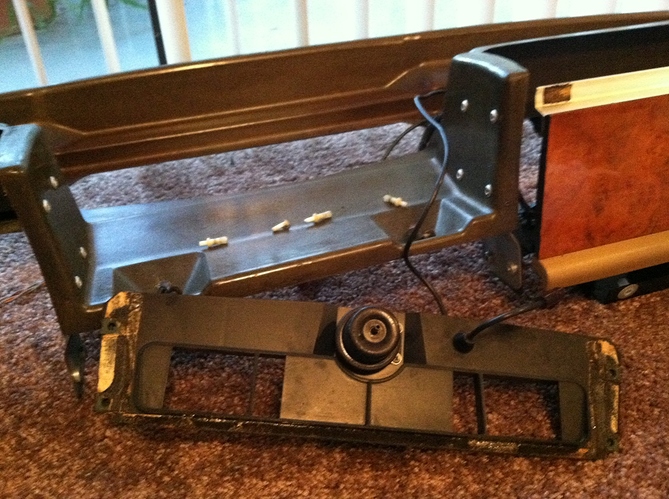 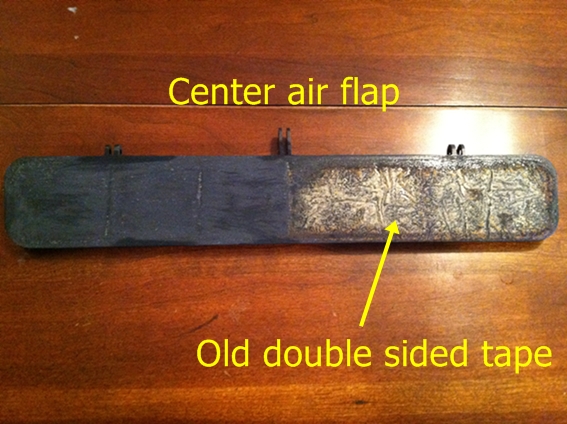 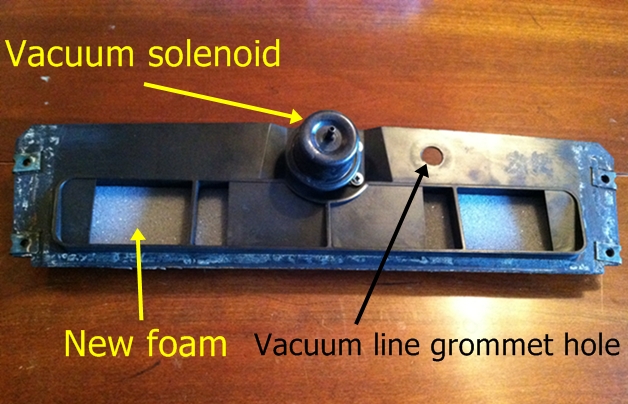