But while annealing them, there must have been some grease or something on one of them and my propane torch actually deformed/melted one of them.

Anybody know a Jaguar part # for them? They are roughly 18mm x 10mm x 1mm, but hard to source.

Greg,
The Jaguar part number for those copper cam oil banjo bolt washers is C4146 but that won’t help you. I believe that John_John machines his banjo bolts differently than the Jaguar and uses much thicker copper washers incompatible with the original Jaguar banjo bolts. You are probably best off finding out what John_John uses.
This is one reason that I am reluctant to use his banjo bolts.

Thanks Paul. Yeah, those are thinner, i forgot.

I finally found 18mmx10mmx1mm online, so should be ok. Local stores don’t really carry much in copper washers anymore

When did you get those, Gregmatic? I checked his Ebay store a couple of times recently and he didn’t have anything for sale on there …

It was either Harbor Freight, or maybe Amazon, but I got an assortment box of copper washers

I bought an assortment of copper washers from Horror Fright a few years ago, and they seem reasonably decent.

I finally found some on Amazon. 16mmx10mm seems to be more the more common size you can find. But I think Jonah’s have a slightly bigger bolt head mating surface, so 18mm OD is warranted.

He sells out of those banjo bolts very fast. Popular item!

Not sure what I did wrong…but here is the washer that melted/deformed on me. Top/left part is a bit bulbous and thicker than rest.

Could a speck of grease catch fire and cause temp to get hot enough to melt copper? 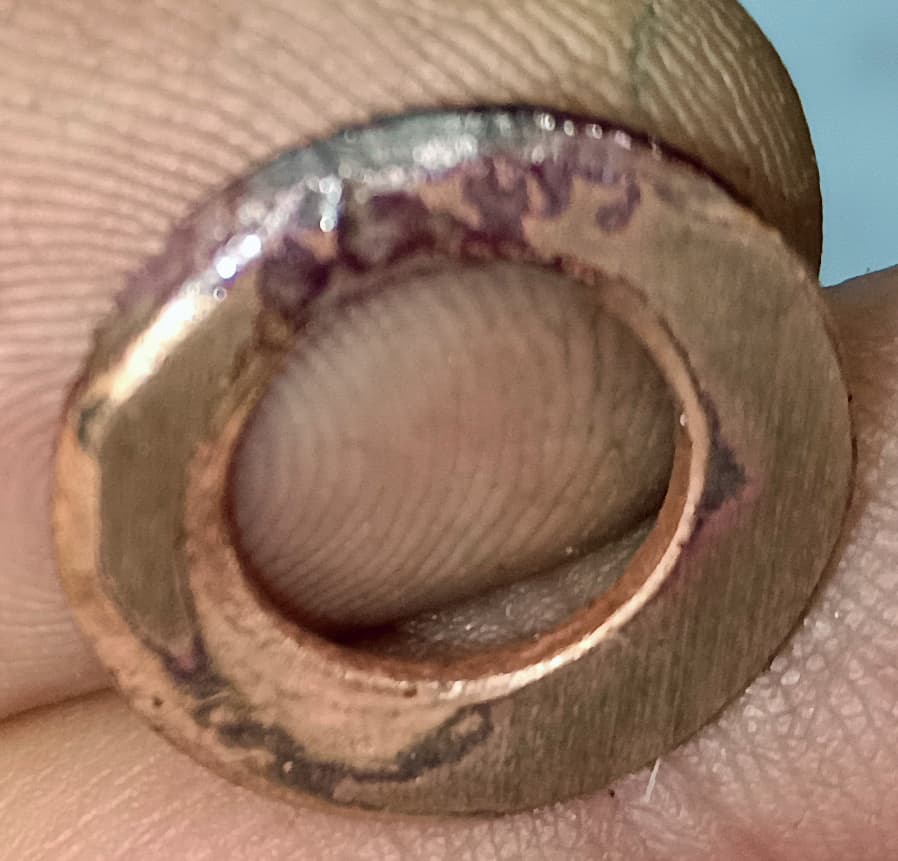 You may have to change your default settings on eBay:

Thanks for posting the links. I’ve been meaning to order a rebuild kit. I occasionally check @John_John1 eBay store and thought he was sold out. Turns out my preferences were filtering out his items. Selecting “Worldwide” instead of “Default” on Item Location brought up all of his items. [Screenshot 2022-05-07 104502]

Grease doesn’t melt copper washers. They always turn silver when heated. If you annealed it it is now soft and will deform to make a good seal so it does not have to be totally flat. If it actually melted beyond repair you have overheated the washer which you do once so you forever know how much is to much.

Greg,
You can try to sand it with fine sand paper in a flat surface, it has plenty of thickness.
Anneal it again after, and as David said, it will be soft enough to deform and make a good seal.

An other trick is to use washers with a slightly larger ID and put a small o-ring in the gap. Works very well.

If you have a FLAPS nearby that sells “Dorman” parts, look for Dorman brake hose bolt washers, P/no 66250. They fit the banjo bolt over the radiator, and are the right size for the cam oil feed also.
Go easy on the heat next time!

I was told a propane torch could not provide enough heat to melt copper, and i got all washers to glowing red for about the same time. In fact, a few i did even longer, and no melting.

This one washer, i still think was a dud.

Greg, i had a similar experience with what could be as you describe…a dud washer. I had mine suspended using a screwdriver shank through the hole. As it got red hot it started to droop elongating the hole. From China.
I never have had a problem re-annealing those on the car. Jaguar parts. Maybe from a better Chinese factory

Maybe from a better Chinese factory

They don’t need to glow bright red and they don’t need to for a while… they just have to get hot enough. If it’s dark and you can just barely see a faint glow that’s enough, you can quench them or let them air cool and they’re soft…
Of course propane melts copper washers…

So I received some new copper washers for the banjo bolts that Jonah made. The ID and OD are perfect match.

@John_John1 supplied washers that are 1.2mm thick. But my new ones are 1.3mm thick.

Just to make sure, will that 0.1mm difference make any difference to the oil flow?
(I assume NO)

Tighten them a bit more

Or sand them down. No it won’t make a difference. If you look at the diameter of the drilling in the bolt you can see for yourself.

Thanks. Also, I only heated the washers up until they just started to glow a dark orange before quenching them, compared to me getting them bright orange before.

No issues this time, and I noticed they oxidize way less.