It is 2022. My BW transmission is needing work. I need a higher highway gear. I have done many hours of searching through the topics and see most respond with recommending putting in John’s Cars kit with T700R4 transmission. I get it.
The alternative is fix the BW leaks, park pawl, quick change out of 1st, and put in a overdrive after it.
Most articles written on the 700R4 swap are a decade old. Surely there is another transmission that will fit and perform better and swap in easier or an overdrive that does not to have to handle 1000HP (Gear Vendors)? I want to cruise highway speeds in a 80MPH capable cruiser without high RPMs. Most driving is around town. Not looking for rapid 0-60MPH performance.
Are there recent alternatives that anyone has done with more modern hardware?

The best way to go is the T700R4 conversion.
It has a overdrive and direct drive on 4e gear.
Kits ar still available from John’s Cars.
I did the conversion on my s-type.
I saw resend ones from a MK10 on the forum.
Modern ones are not possible, as they need a computer

While the 700r4 is an older transmission, it is still widely used. In routine form, it’s not built for “1000HP” and it’s specifications are perfect for what you say you want. And, there is an off-the-shelf kit to do the job which can be done without even pulling the engine in a Mk9. So, what’s not to like? I would suppose the reason the posts are older is that it’s been worked out for a long time, and there isn’t a need to repost.
Or, you could reinvent the wheel, build an adapter plate for something else and figure out how to hook a computer up to it.
One thing that you could consider, and I would talk to John at John’s cars about this, is whether there is enough room for a 4L60 in a Mk9, which is the later computerized version of the 700r4. There are numerous aftermarket electronic controllers for this model that would be simpler than the cable arrangement on the 700r4, but I don’t know if the belhousing can be reshaped to fit a mk9. I think not.

Not sure whether he has finished yet, been at it a few years, even though he is a good guy on Jags, engine was out

Its a Johns Car kit

I dunno, I quite like the speed hold, uncertainty if the ol girl is actually in park and a sea of red on the garage floor - it’s so satisfying!

I’m either doing the John’s quarterbreed kit for the 700R4 or swapping to a manual.

I’m not sure there has ever been a more plagued automatic than the DG.

I put a 3.54 gear set in my Mk7 And it was great. I did have a 4 speed in it already of that makes a difference. The DG250Mj used in Jaguars at that time was awful. Tended to leak at the speed hold bellows.

A Jaguar guru friend of mine now passed told me years ago that the TH200R4 is more than enough transmission for any Jaguar XK engine. The hotrodders prefer the 700r4 because it’s stronger, but there is no really no need for the Jaguar. I don’t know if the fitment is the same with the John’s Cars kit, but a phone call should answer that. Please repost if you decide to do that. I might eventually put one in my Mk9, if I ever finish the current batch of projects.

I have made my decision. I am putting the 4L60E transmission in the Mark 9. It will be a bit more expensive than the 700R4 because of need to buy a controller, but it will be a newer more common transmission easily serviced and able to be tuned to shifting points. I will have to put in a throttle position sensor, and the speedometer will get an electric to cable adaptor. I can buy a 4L60E with 1600-1800 stall torque converter for $1400.
If anyone has done a TPS adaptor on the SU HD6 carbs, let me know.
Any other tips you can give are welcome, such as which computer, etc.

Interesting choice. Having recently put a 700R4 in a Mk10, I have to ask: Does the belhousing on the 4L60 have the same wings as the 700r4? Those have to be cut off to fit the tunnel in many of the Jaguar applications. I would have preferred to add a controller than to re-engineer the transmission cable on my car, although it works fine.

I will let you know when I get there.

Out with the old. In two pcs. Used Doug Schrantz’s original Jaguar Automatic Transmission manual to remove. Had to drop the rear motor mounts to get to the top bell housing bolts. I was glad for my long socket extensions and flex. I wonder how the original mechanics managed. Probably put engine and tranny in as a unit. I used open end wrenches mostly and took my time, not the frantic pace of today.
My 4L60E will be ready Monday. My John’s Car’s kit may be two months in coming. Backorder logjam. I will have to tackle something else for a while. 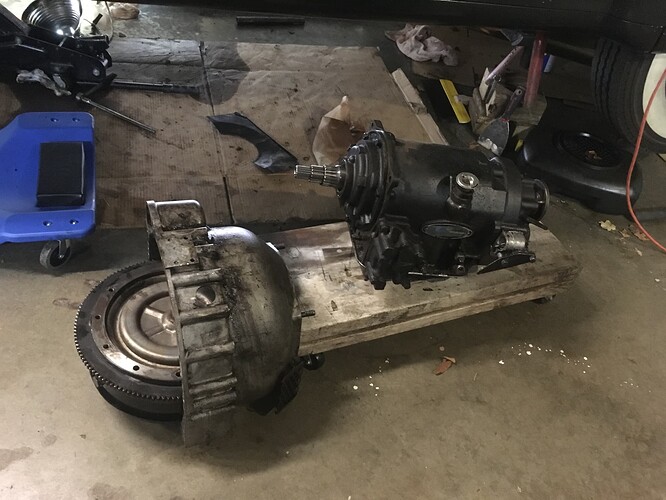 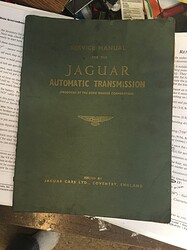 Very much looking forward to seeing how that 4L60 fits. I’m assuming John blessed the belhousing.

The 4L60E is in. John’s Cars bellhousing adaptor and flexplate were accurate. I did not have to cut anything on the transmission case. I am working on rear mount height and driveline now. Also wiring in the TCI EZ-TCU and the Dakota Digital cable adaptor. Found the speedo drive “catching” in the instrument. So will be pulling it to look for a bad bearing. Somewhere I read the speedo could be converted to electronic. May consider that to get rid of the pesky cable.
Of course, while I am at it, I am changing the pinion seal, and driveline support center bearing, putting in a gear reduction starter, etc 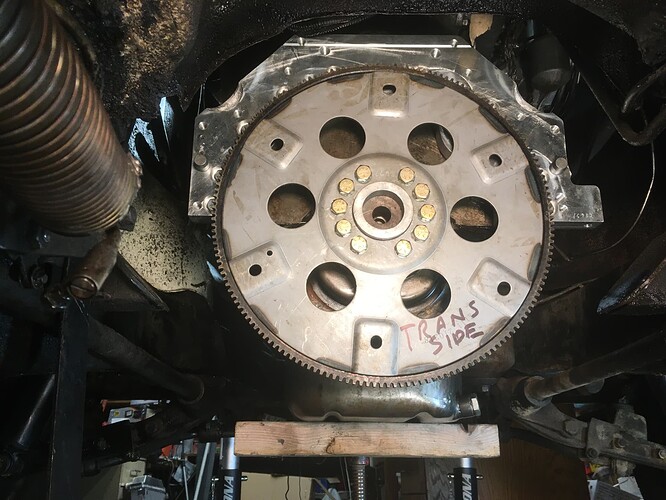 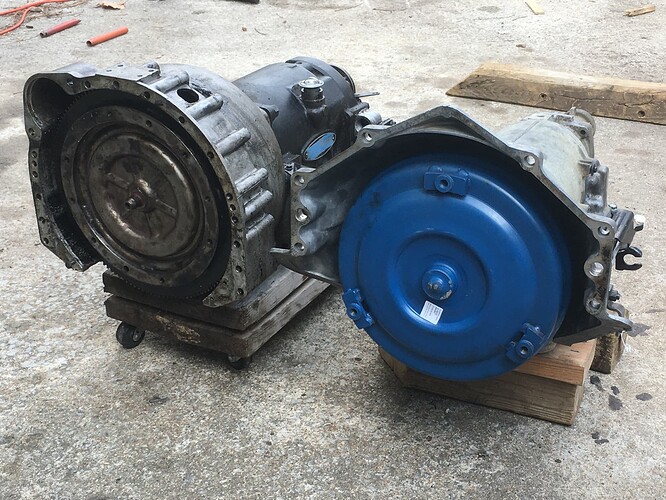 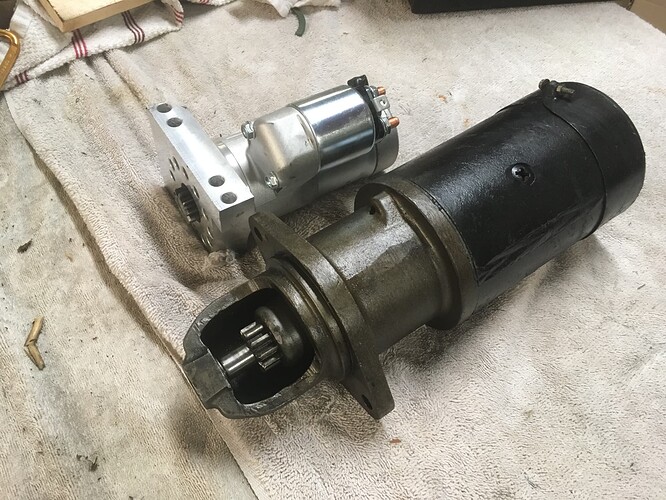 It’s looking great. Nice that you didn’t have to cut the case on the 4L60 - unlike the mk10, it looks like there is plenty of room on the Mk9, or did you do some body modification?

I’m confused by the starter mount block - my Mk10 conversion did not have a separate aluminum block. I presume that only relates to the gear reduction unit? On my setup, the stock GM 700R4 starter spins the 4.2 just fine.

Have you considered a GPS speedometer? In my last conversion I had restored the original gauges but the tach didn’t work (would need conversion to V8 signal) and the speedo was very jumpy. I found some really nice looking GPS speedometers and matching tach, that while not stock, did have a nice period-looking black / white face - I never did get around to doing it, but its an idea.

I have the Dakota Digital cable adaptor, but the gear attached to the cable broke out, and I cannot find a replacement. I looked at digital from auto-meter and it is the closest I can see. I love the analog mechanical one, and would rather go with it if I can find the part . for t5" Smiths. 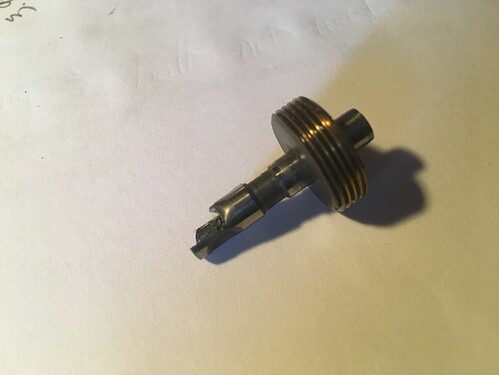 the driveline is finished and ready to install after I get a pinion seal. I ordered up the parts from the friendly folks at www.driveshaftparts.com, and they were inexpensive and free delivery in three days. Had a local guy cut the tube and weld it in. Changed to a GM center support bearing that seemed more substantial and widely used setup than the Mark IX spring and rubber mounting. Was amazed that sizes of driveline products have not changed in 60 years. 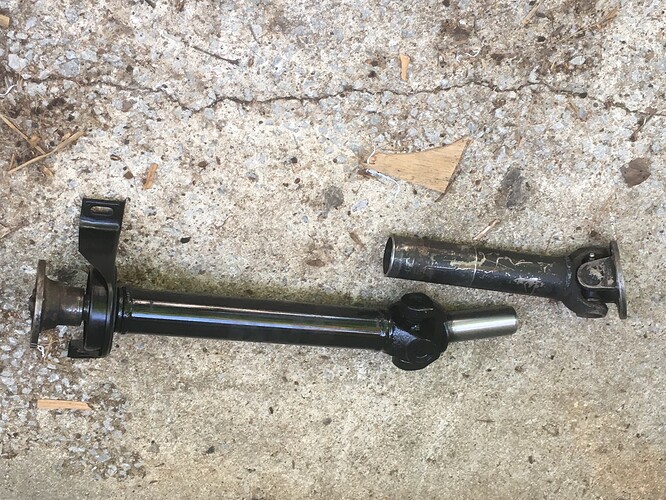 After installation of the driveline, there was a shudder at launch. Checking alignment, the center bearing was off center by 1". I also had more than 6 degrees deflection at the rear U-joint.
My solution- I flipped the rear leaf spring shackles on my Mark 9. 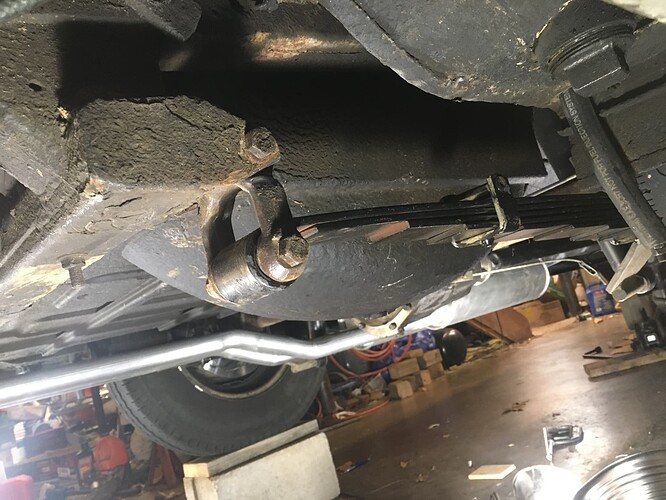 Stock differential pinion was 5 degrees pointing down (going forward) Engine and trans were 6 degrees slope front to rear. Combined angle was 11 degrees. No angle should exceed 3 degrees.
When I flipped the rear shackles, the spring ends became the same height from the ground, thereby giving a 0 degree pinion angle. When 6 degrees were split among 3 universal joints, all were about 2 degrees. 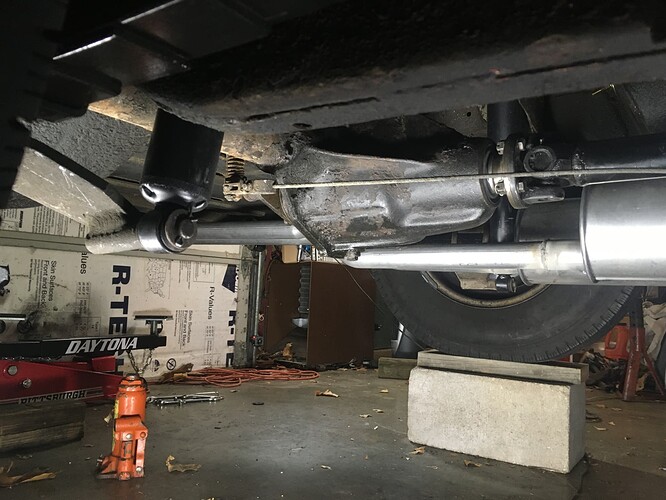 All of the shuddering at acceleration went away.
Another pleasant result is that it raised the saggy rear of the car about 2 1/2"
Now the car is takes off smoothly and has a better stance. The door sills and frame are exactly level. note rear hubcap/fender skirt. 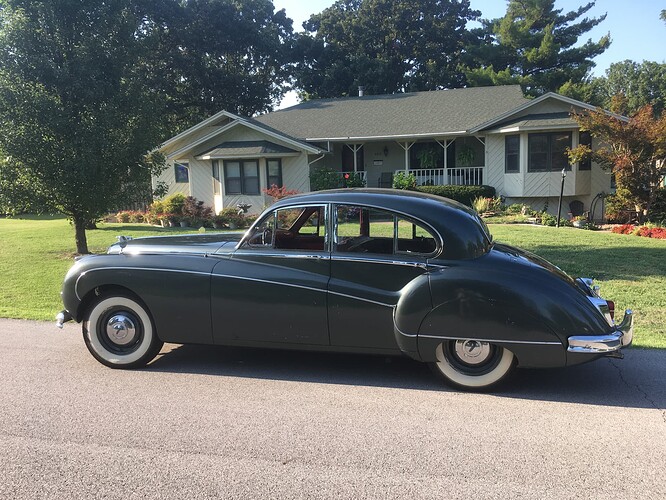 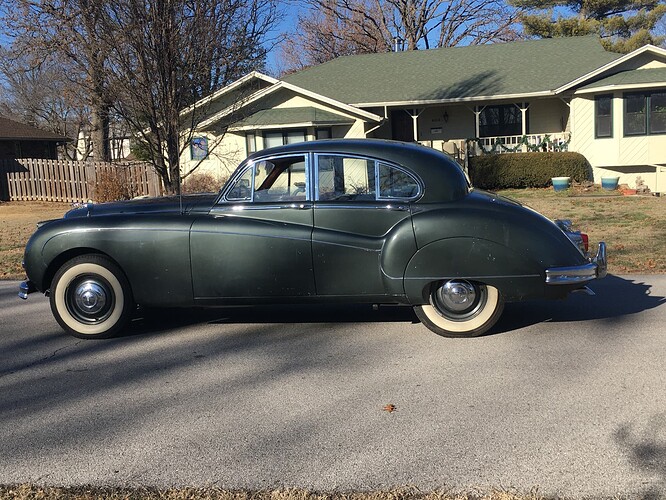 I used an app on my phone Tremec Toolbox that makes your cell phone an angle finder. 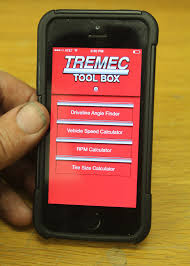