Hello brains trust. I am currently in the process of servicing the cooling system in my 1986 XJS-C 5.3L V12. I have removed the radiator for re-coring, flushed out the heater core and was going to flush the engine block through the bypass cross over pipe ports on the front of the thermostat housings as I have seen done in a video posted on YouTube channel Living with a classic. As I could not get any flow through these ports, I removed the thermostats and found that both thermostat housings have a small welch plug at the back blocking the flow to the cross pipe from the engine. This means that with the thermostats closed, there is no flow at all through the cooling system. Only once thermostats open, coolant can flow through the thermostat housings to the radiator. I thought that there may be a blockage in the water rails, but I took them off and there was no blockage. Has anyone come across this before and can tell me if this is correct? Thanks in advance.

Only once thermostats open, coolant can flow through the thermostat housings to the radiator.

and that is the exact purpose of the Thermostats…

The disk on the back of the thermostat pushes against a welch plug not a hole.

No, there should be a hole there…
Did you look at the attached diagram?

Is the car new to you?
Maybe the PO plugged the holes in an attempt to address cooling issues?
Plugging the holes would mean that when the thermostats are closed there would be no coolant circulation in the block, as both exits would be blocked, and don’t know what ill effects this could create.
If this is the case I think you should unplug them and revert to the original configuration.

Thanks for the advice Aristides. Yes, I have recently purchased this car. I have measured the length of the thermostat rear valve when fully open and I think it will be too short to close off the bypass. Maybe this is why the plugs were installed? Everything looks factory made, so I don’t think it was done by the PO. What is the effect of no coolant flow while the engine is warming up?

I have measured the length of the thermostat rear valve when fully open and I think it will be too short to close off the bypass.

Yes, a common problem.
You must get new ones and make sure they do open more than 41mm.
Or, as some have done, machine and install a nylon or Teflon seat/extension.
They also must have a jiggle pin.

Here are some part numbers, but check the specs before.

Thanks Aristides.
Here are a few photos that clearly show the plugs at the back of the thermostat housings. 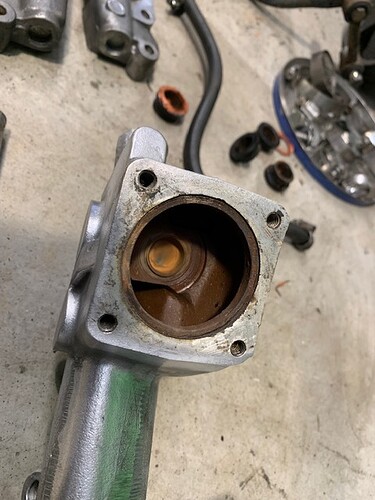 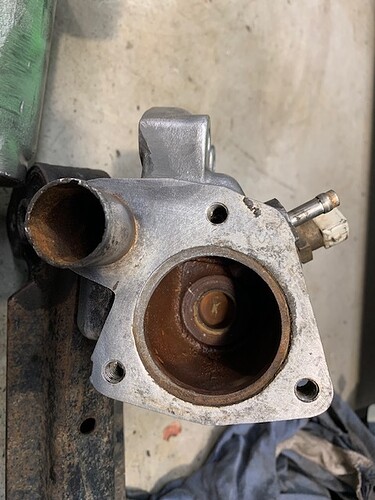 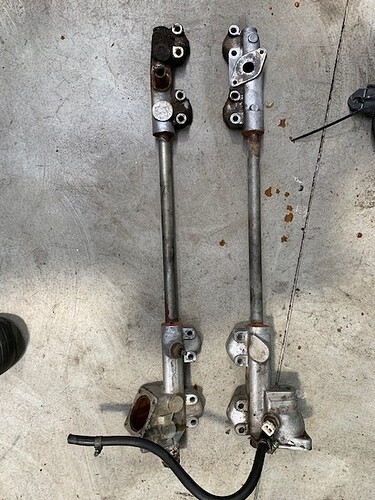 A not so ingenious modification…

Even as unaquainted withat engine, that i am, remove them. a less than great idea.

no coolant f;low!!! quick warm up. tehn!!! No, this engine is too sensitive to running hot. must be avoided.

I tried removing the plugs but they were very tight so I ended up drilling a 1/2" hole in each one.

I think I would have waited on drilling a hole…until I had the proper thermostat in hand, and measured the diameter of the disc that is suppose to block that hole.
SD Faircloth www.jaguarfuelinjectorservice.com

You must get new ones and make sue they do open more than 41mm.

I just happened to have the B bank water rail and thermostat housing lying on one of my tables in the shop. From an '84 V12. Pulled out the thermostat and measured the distance from the housing recess (where the thermo sits) to the hole. I got 43 mm +/- The thermostat that was fitted was a “Motorad” with a jiggle pin. No part number, just the name. 180F. I checked the motorad website. They specify 2033-180 as their part for a 1986 V12 Jaguar. No info on their spec sheet on the throw (travel distance) of the bypass/secondary valve, but data says it has the jiggle pin. Vadim could send them an e-mail. SD Faircloth

I have bought 2 new thermostats that I measured and they should be OK.

I placed the thermostats that I initially bought from a Jaguar parts supplier into boiling water and found that they were not long enough to shut off the bypass port, even though they were the specified ones. I then found info on this forum on which brand and model thermostats will work and ordered them (Dayco DT18A).

I suggest you figure out how to remove the remainder of the plug, or drill it out to the OEM diameter.

Does all that matter ? That hole, when not blocked off by the thermostat plunger, as in when the engine is cold, allows some of the system coolant to circulate thru the engine, to speed up engine warm-up. With the thermostat fully open (on a hot engine) the hole is blocked and all of the engine coolant flows thru the radiator. So, maybe with the 1/2" hole, it’s gonna take longer for the engine to warm up, as the flow is reduced by appx 50 %. Everybody harps about warming a cold engine as soon as possible to reduce friction wear.