Have been getting ready for spring and noticed that the left hand side of the bonnet on my 69 is a tad bit higher than I think it should be (and higher than the right side.) 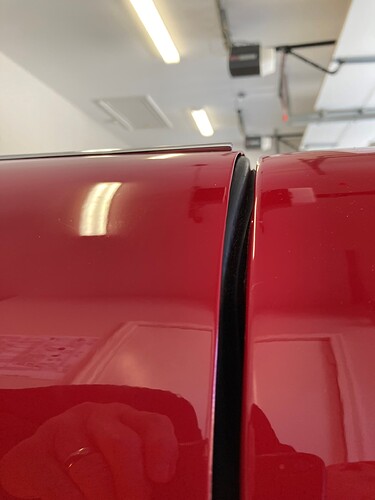 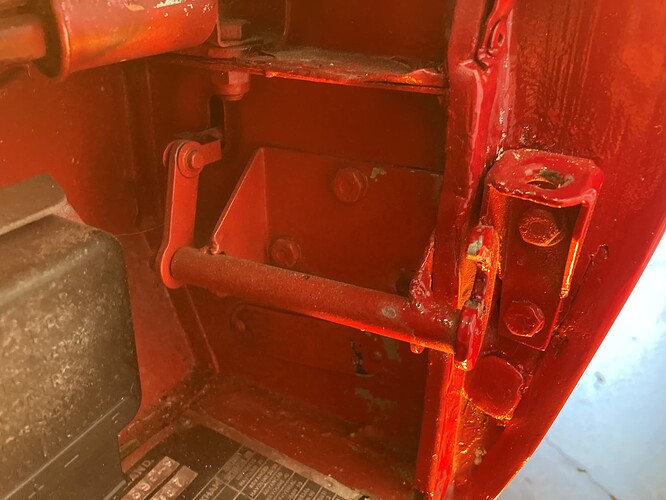 The adjustment is not on the car side but on the bonnet side. Loosen the bonnet piece, whatever it’s called and raise it slightly.

There are a couple of adjustable things on the bonnet side. The pin that actually engages with that receiver can screw in and out, and also the bracket which that pin screws into is able to move about quite a lot once the set screws are loosened. But there could be other things causing interference so it might be wise to fully unscrew that pin to see if it can easily push down to the correct height.

Also, you appear to have a much wider gap that is ideal. That can be closed by removing a front shim from the hinge bracket (assuming there are any to remove).

Great suggestions. Will go out and play with it. I thought the adjustment on the bonnet side only moved in and out. Will look more closely.

That was a good suggestion. I unscrewed that pin screw and I can’t force the bonnet down on the left side. By pushing it up and down (the rubber trim acts as a spring) I can hear banging (metal on metal to my ear.) For the life of me, I can’t figure out where it is coming from, The latch seems to clear properly although it is a bit tough to watch things through the bottom creases. But something is keeping the bottom from going further down. Will continue to look. If I find it, will work on the latch placement which does indeed move up and down as well as sideways. (I have pushed it back and up to make sure it is not the culprit.
On the other matter, I have never removed a shim, can one person do it or do I need a helper because of the weight of the bonnet?

The shims are slotted so you don’t have to remove the set screws. Just loosen them and the shims should slip out. Then when you retighted them it will suck the bonnet back by that amount.

Hard to offer advice on the interference without seeing it. It is certainly normal for it to pop up after pushing it down because of the hinge springs and rubber seals forcing it up. But if you put some weight on it, it should go down easy enough without a strong resistance. Common offenders are the inner fender, a hose clamp facing up, the spring hinges hitting the underside, the radiator sitting too high because the frame it sits on is bent upward, etc. It can take a while to find. Some carefully placed putty can help.

This is the perfect application for a blob of modeling clay. Put the clay down close the bonnet, open the bonnet and inspect the clay.

I can hear banging (metal on metal to my ear.) For the life of me, I can’t figure out where it is coming from

possible areas of interference include the shoulders of the radiator and if you have AC, the alternator and AC compressor.

Another potential culprit are the slightly scalloped sections of the internal structure of the bonnet where they cross over the picture frame. You can see if that’s hitting be looking through the wheel well.

If you have the balance links with springs and not the hydraulic piston, the links could be the problem. There are slots on the links where they bolt to the bonnet to allow for adjustment. If you have the links bolted at one of the limits, I think the top of the slots, you can open the bonnet pretty wide, but it won’t close. If that is your problem try repositioning the link so that the bolts are centered in the slots.

One cardinal rule. Don’t force it shut. That will promote pimples (a reverse door ding type dent) on the bonnet. And do your adjustment a bit at a time until you are satisfied.

Another source of interference is the air inlet snorkel to the heater box intake.

BTW screw that pin in (upwards) not out, to allow the bonnet to close deeper.

A word to the wise. Fiddling with bonnet hinge shims isn’t as straightforward as you might think. In some ways it’s counterintuitive. A slight change on one side will also effect a change on the other. You might get lucky and get it done with a single adjustment but you might be at it for hours.

I would suggest, as a quick and dirty, that you open the bonnet and lay a sheet of plastic over the entire area from the firewall forward to the radiator and hanging out to the sides. Shut the bonnet until you feel the resistance you are talking about. Maybe put a small weight on the bonnet to simulate your hand pushing down. Then tug at the plastic around the edges. You should be able to triangulate where it is dragging at and give you an idea of where to concentrate your inspection. If this situation is recent, my vote would be on something that got banged during driving and moved. I would definately look at the splash guards behind the wheels.

The shims are supposed to be slotted ,maybe not
A few Hours ………hmmmmm Maybe a few weeks
Easy to scratch paint
And it didn’t just warp over the winter
If the bonnet webbing is loose it can shift forward if you pull up on the air scoop you may find it shifts back If it fit properly before you shouldn’t need to play with shim’s although they may have used the pins to pull it back stressing them because it wasn’t shimmed properly to begin with . Now the pins have shifted
Cheers

Lots to investigate. Good suggestions all. I like Harvey’s sheet of plastic trick and will give it a shot. My first impression is that something near the battery area of the engine is interfering and the air scoop is a prime suspect since I repainted it last fall.
Will update later. Want to at least examine the shim situation too.

Well, I have been investigating for a few hours. removed the air scoop and that didn’t do anything. Tried the sheet of plastic and that confirmed it was occurring near the battery area which is what I had deduced from the sound of metal on metal.
Finally figured it out. A little background might be in order. I bought this car on the Bring a Trailer auction site a few years ago and the seller pointed out that the bonnet was a replacement due to a fender bender. I bought it because it was owned by a CA mechanic and I wanted a driver. The car has run wonderfully for the years I have had it but I have been wanting to spruce it up with new paint and interior. BUT I think that fender bender is coming back to haunt me. The problem was that the side of the latch was actually hitting the side of the closing mechanism. I ended up grinding off a bit of the left lower corner of the latch so that it would not hit the closing latch mechanism. The first picture is of the latch and the second is of the closing mechanism. 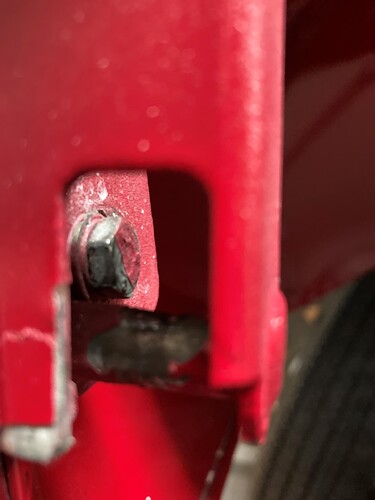 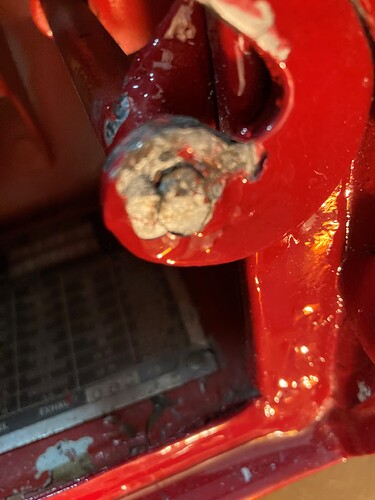 That has alleviated most of the problem. Still a bit high but I can live with it for now. 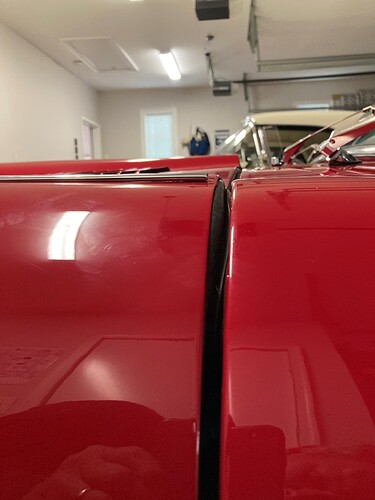 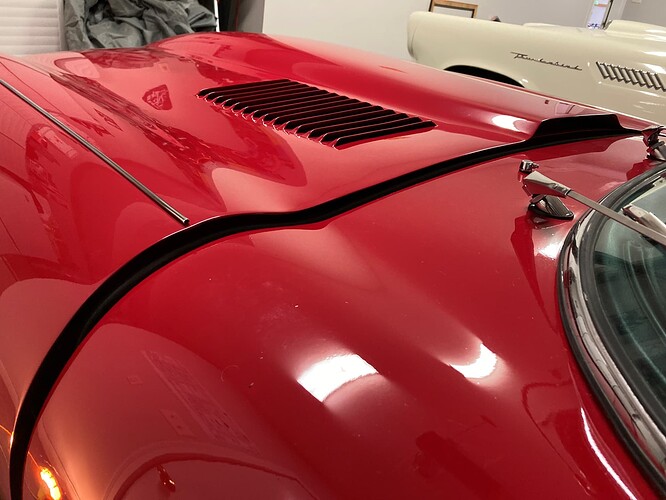 Yes, that is way to big of a gap. But if you close it by means of the removal of vertical shims, the problem is that the lower corner of the wheel arch may no longer align with the end of the sill (assuming that it does already.

To get more specific suggestions here, maybe post a photo of the whole gap that side, to include the rear of the wheel arch and the sill.

Take the inner splash shields off. Both sides.
Take the spring hinges off. Both sides.
Get the horizontal lines to the sill even via the shims in the front.
Then work the shims for the fore and aft movement.
And Yes, Nickolas is right, for every adjustment you make it will effect it somewhere else.
Ive spent as much as 8 hours fitting a replacement bonnet.

BTW, If they didnt lead load the leading edge of panel in the body properly, when they replaced it, you are totally screwed…

Agree. BTW the spring hinges (I think the better term is balance links, as the “hinges” are down at the area where the shims are) will work to open the gap you are struggling with. I have seen different “opening” values reported. If you can get it a little tighter than you think you need, without the springs, that is usually a good thing.
You will of course document what shims you have where but I advocate balancing the center of the forward undertray on a floor jack and pulling all the shims. Use the latches at the cowl to get everything in alignment there, using the floor jack to represent the shim space vertically and let the fore/aft movement at the hinges float. Hopefully you won’t go metal to metal fore/aft but it happens. Then revisit which shim stacks you need up front. It sounds drastic but as Nick says, the effects of the shims can be deceiving. I think it best to leave them out and let the bonnet come to its most “relaxed” position. When you’ve got it close start adding shims. And finally add back the balance links.

On the 63, I had a problem with the side latch receivers on the firewall interfering with final closure. I wallowed out the holes a bit.

I assume you’ve seen these articles?

I have finished painting all the interior surfaces of my bonnet. And all the exterior surfaces are shaped and, with a little final cleanup, are ready for basecoat/clear. So this is the point in the…

I see that it has been over a month since my last post. Where in the hell did the time go? Well, an interesting thing happened. I got vacinated against Covid. So did my wife. She in particular, wit…