I replaced front rotors and pads on my 94 xj40, then the trouble began

Just an idea but sometimes you have to bleed the line from the master cylinder to the pump, sounds like you have air in the system somewhere.

ps Why would you want to mix synthetic with your brake fluid? reason?

I’m dealing with ABS issues on my car still, so I’m probably not a good person to give advice. However, I can tell you that you certainly cannot mix synthetic and non-synthetic brake fluid.

It’s my understanding that all brake fluid is “synthetic” (DOT 3 and DOT 4) … it doesn’t have a petroleum base and is man (or women) made.

DOT 5 brake fluid however is another animal. It is “silicone” based and must NEVER be mixed with DOT 3 or 4.

DOT 5 is also not compatible with anti-lock brake systems

Unlike polyethylene glycol based fluids, Dot 5 is hydrophobic (won’t mix with water). It’s advantage over other forms of brake fluid is that silicone has a more stable viscosity over a wider temperature range, also it doesn’t damage paint.

Good point Grooveman. You’re probably correct about them all being synthetic. When I say synthetic, I’m referring to DOT 5. This goes back to when I used to work at an auto parts store. Whenever someone wanted synthetic fluid, that’s what they were referring to.

Problems solved! Who knew that changing front rotors and pads could cause such problems.
The fix required the following steps.

Brakes are now great.
Thanks for everyone’s help.

Good for you hanging in there …

In your case all you did was change the brake pads and all hell broke loose. Since the parts in our cars are now a quarter of a century old it’s not unusually for several unrelated things to go wrong at the same time.

Next time you change your oil be sure to check if your radio is still working !! 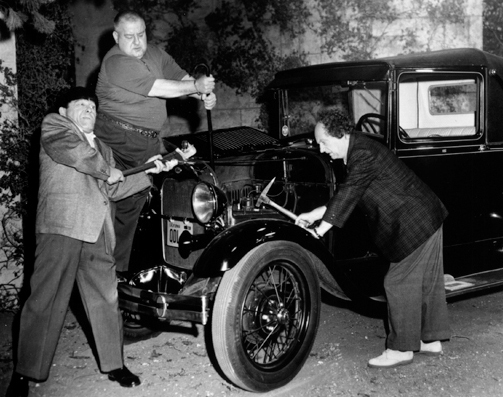 Was replacing the accumulator sphere the last action you took before the problem was solved?

If so, that would explain why you still had the BRAKE and ABS warnings on the dash because as I mentioned previously, a VCM ‘FAIL’ code can mean either or both of two things. Either the fluid level in the reservoir is low AND/ OR the brake pressure in the Teves system is low.
Since you checked the fluid level and determined that wasn’t the problem, that left the brake pressure and a faulty accumulator could certainly be the cause of that.

Thanks for all of your help. Any time I post a question I am relieved to s your name on a reply. I know that your answer will be helpful.

I am happy for you, finally your problem is solved. But, can you tell me please how to bleed master cylinder? cause I am facing lots of trouble with my Teves system like: air in system, oil very dirty, abs run for long time and when it turns off few seconds and it turns on again…

Thank you in advance

I am happy for you, finally your problem is solved. But, can you tell me please how to bleed master cylinder? cause I am facing lots of trouble with my Teves system like: air in system, oil very dirty, abs run for long time and when it turns off few seconds and it turns on again…

Not sure that the master cylinder would be your problem, but do you have a Haynes manual?

"I can’t find any specific instructions on this procedure in the factory Service Manual but dear old Haynes has a section devoted to it in Chapter 9, Section 6, paras 9 thru’ 15 and also a method of bleeding it on the vehicle too in paragraph 20.-- "

I no longer have a Haynes manual so I’m afraid I cannot copy it for you.

When did you last change the brake fluid? “Very dirty” doesn’t sound good!

Thank you very much Bryan.
Yes I have the Haynes book and I found the chapter you told me about.
Concerning, the brake fluid I’ve changed it one week ago( till now no dirt). But, last time I needed to remove the brake fluid reservoir and clean it; cause it was stuck with lots of dirt I don’t know where it came from.
the symptoms are the following:
when I start my car the abs works immediately but, would not stop.
when the abs finally shut off few seconds max and it starts working again. It starts working even though the brake pressure was not gone.
What is the problem in your opinion?

I am looking for an abs sensor but, no result.
And if I found one it will be used; so I can not tell if it is defected or not.
Can I use an alternative abs sensor? (instead of the jaguar abs sensor “the blue one”?!!!)

the symptoms are the following:
when I start my car the abs works immediately but, would not stop.
when the abs finally shut off few seconds max and it starts working again. It starts working even though the brake pressure was not gone.

We may have a terminology problem here.

By “the abs works immediately” do you mean the Teves electric pump - or do you mean that you see an ABS warning light on the dash?

Assuming that you mean the Teves pump, here is a post I did some time ago which describes what should be the sequence of operations -

From your description of the problem, I assume that, as soon as you turn the key to position (II) without starting the engine, the combined pressure warning switch (CPWS - blue/gold job next to Teves pump) detects that the ‘lower switching point’ (2000 psi or less) has been reached (by normal static loss of pressure in the accumulator) and the motor is switched on. The motor will continue running until the ‘upper switching point’ (2700 psi) is reached.
There is a possibility that your accumulator has lost its nitrogen charge so that within a few seconds of the upper switching point being reached, the pressure drops immediately the pump is switched off so that the lower switching point is reached after those few seconds and the pump starts again and so on. The brake boost pressure will not have disappeared after those few seconds because there is still 2000 psi in the accumulator when the pump restarts so the pedal does not ‘go hard’.
Do the simple accumulator test described in paragraph 6 of that post. If you then suspect that the accumulator has lost its Nitrogen charge, you should remove it and insert a blunt probe in to the oil orifice. If the probe enters the sphere then the diaphragm has failed. On a good accumulator, the Nitrogen pressure behind the diaphragm forces it down to block the oil orifice and a probe will not enter.

Hi Bryan,
Thank you for your reply.
I made the accumulator test as you told me and no problem with it.
What other diagnostics you suggest me to do?
Is there any way to test the “Check valve” if defected?

Is there any way to test the “Check valve” if defected?

To which “check valve” do you refer?

I’m not aware of a check valve in the Teves system which is known to cause a problem.

Bryan I am sending you a picture for the check valve 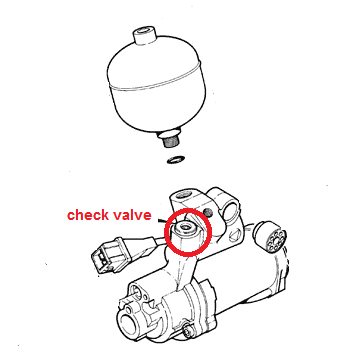 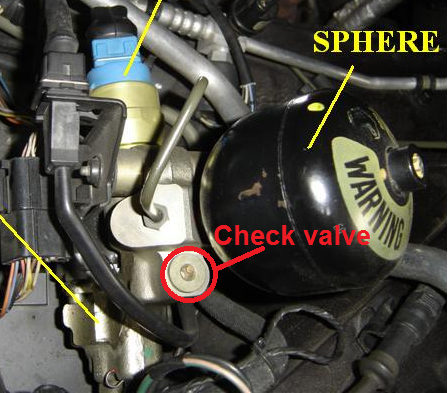 As I mentioned previously, I’ve not heard of that check valve causing a problem before and outside a laboratory test rig I’ve no idea how you could test it. Worse, I see that the check valve is not listed as an individually available spare part so your only hope is to cannibalize one from another Teves unit.

Alternatively, didn’t you mention that you had had some seriously dirty brake fluid earlier? Could it be that the check valve is contaminated with dirt and is stuck open? Can you remove it for cleaning?