Is there any way that improper installation can lead to early failure on the front springs?

My front springs have broken for the second time in 18,000 miles. The first set lasted 6000, and the second set lasted 12,000. Both sets came from one of the UK Jaguar specialist suppliers.

I’ve never done the spring change myself and looking at the procedure in the ROM and many posts and picture here and on the old site I can’t see anything obvious that could cause the springs to fail other than bad quality aftermarket springs.

But before I go back to the vendor, I just wanted options … is there any way that the springs could be installed in a way that creates stress, twisting or anything that could lead to premature failure?

That is odd. The only thing I can think of is that they somehow compressed them too much initially when putting them in. I’m sorry you had so much trouble.

My front springs have broken for the second time in 18,000 miles. The first set lasted 6000, and the second set lasted 12,000. Both sets came from one of the UK Jaguar specialist suppliers.

This is very concerning, because my front and rear springs that were purchased for my 4.0 XJS came from a UK supplier as well.

What exactly do you mean when you say that they broke. Did the springs split into two pieces? What made was it that made you look at them to see that they had broken? Please elaborate!!!

Can you post pictures especially a close up of the cross section that broke, and an overall shot of the assembly.

Odd indeed, I’ve never heard of such a thing.

somehow compressed them too much initially when putting them in.

Over the past 6 months or so I’ve had reason to mount, dismount, and mount several sets of springs for various reasons (so much so that no longer am I afraid of the process, but have become quite proficient at it) using the Jaguar JD15 tool. I have not seen on any occasion where over compression is even possible for two reasons.

Whatever the case may be, having a spring break at any high rate of speed seems to be a highly dangerous, life threatening situation.

Thanks for the replies - here are a couple of photos but bear in mind the springs are still on the car while I find a new set and someone with the correct compressor to change them. 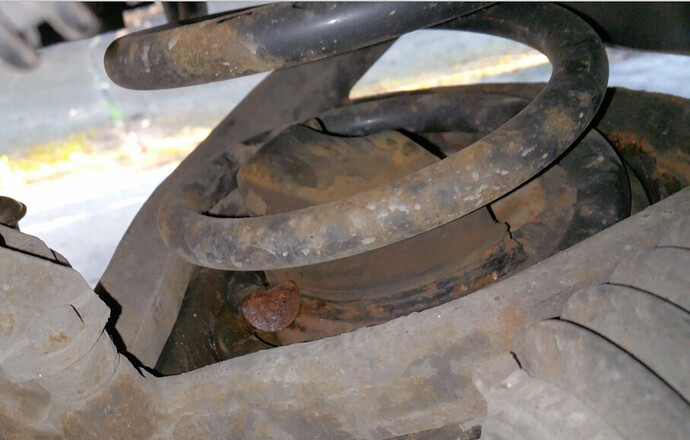 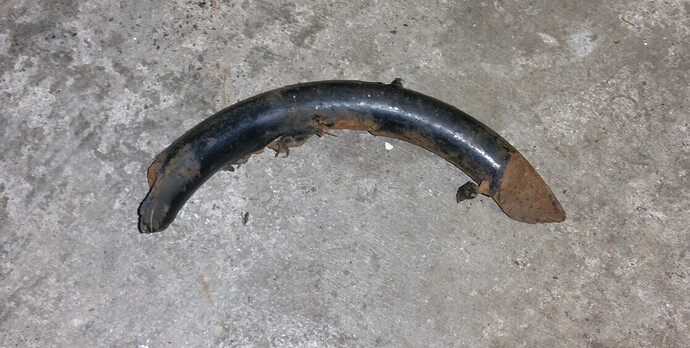 This is the left hand side spring. As you can see it has broken in two places and i was able to lift out a piece about 4 inches long that was sitting loose in the spring pan. Note that there still a coil of the spring from below the break point in the pan.

I first noticed that the ride height had dropped when the front spoiled scraped the top of a speed bump at the entrance to car park at the shops - and no, I wasn’t going over that bump at speed. The bumps are there to slow traffic for pedestrians leaving the shop.

Parked up that night and at the weekend when I went to jack up the car and take a closer look it had dropped even lower onto the bump stops.

Wow, I’ve heard of old springs cracking, but not that bad, especially newish ones. I would think the supplier is buying some very cheap steel that seems to rust all the way through!? I would be nervous now taking off that spring pan, or is the spring totally uncompressed?

Only aftermarket springs I’ve ever bought for my other cars are Eibach, they make good quality springs. They MUST make some that would fit our XJS’s???

Only aftermarket springs I’ve ever bought for my other cars are Eibach, they make good quality springs. They MUST make some that would fit our XJS’s???

Yes, they do. Also Aston Martin DB7 springs if you fancy a bit of an upgrade.

I can only think that a spring failure such as this, is a manufacturing defect. You say just a few thousand miles, but how many years was it?

Good quality OEM springs should last a long long time. I’m still running with my 1988 springs, and they look fine and have plenty of height. In fact, I’m about to remove them so I can get rid of the spacer, as I have TOO much height in front.

Only issue I’ve ever seen from old old springs is they sag.

I still think it’s a manufacturing defect, but is it possible to install coils wrong on this car so they get too much stress? Sorry, just asking, not blaming you, Jamesken. As I’m about to remove and refit mine, and I’d like to know.

Both sets came from one of the UK Jaguar specialist suppliers.

Are both sets the same brand? Or are we talking about two completely different products failing the same way?

Yeah, the mileage is short, but where and in what conditions has this car been in for that amount of rust to have taken over like that? Unbelievable!!! And you say that this is the second time. Were the first set of springs in the same condition as well? And, what was the time period that both the first and second set of springs were on the car?

I don’t know if I’m allowed to ask or if you are allowed to answer, but who is the supplier?

I’ve replaced one that has broken, but it was a while ago. I can’t remember if the spring has a flattened bottom, or if the spring pan is contoured to fit the end of an open coil. With an open coil I think you are more prone to something like a stone getting lodged in the lower part of the coil and causing extra stress at a single point. It will also wear through the outer coating and invite corrosion. Still no excuse for a bad product though.

Do we have a metalurgist aboard ?

I can not recall any busted coil springs in any of my critters. One case, though. busted front leaf spring in my 47 Ford. Delivering news paper on really bad rocky roads…

Another, rear leaf springs on my 50 Chevrolet. One at a time. Attributed to rough roads in cold weather .My theory

Let me try and answer a few questions comments in one post and for the archives.

I don’t think I was driving on them for very long after the break as the droop was pretty obvious after it happened. Pretty sure they gave way while parked, don’t remember any load noises or banging while driving. Car sits in a detached garage so would not hear any loud noise if it collapsed in the night.

Kirbert - yes I bought both sets from the same place. I thought enough time had passed that it was likely to at least be a different batch. And I felt I had left the first pair stored for too long before fitting them to realistically make a claim from the vendor.

A.J - conditions are normal Irish conditions - yes it’s wet & cold! But also my boy-racing days are behind me I don’t throw the car at kerbs or speed ramps, prefer to cruise at my age.

Cosmo - the springs have a flat top and bottom. Here is a picture from pre-install. 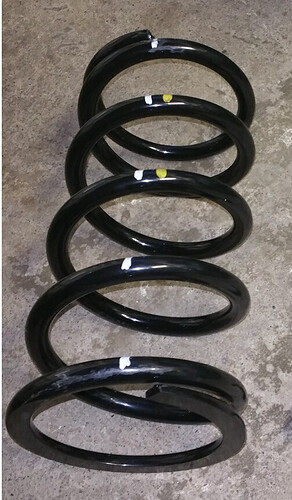 Maybe someone recognizes the white/yellow markings?

Gregma - I’ve sourced a set of Eibach which are on their way to me this week. They come with a few extra packing rings to dial in the ride height so hopefully I won’t be off the road too long.

My money (twice!) is on a manufacturing defect. But also, I obviously have a new set of springs to install in my near future so that is the reason for my original question about bad installation causing extra stress. I’ve also got some pre-owned spring pans on the way which I will clean up & paint for a better install.

My car has the original springs from 1986.
I think one side has sagged a bit, but I compensated with two extra shims.

yes I bought both sets from the same place.

Clearly there is a problem with the springs themselves.
I did this job a few times and there is no way you can over compress the springs during installation or mount them the wrong way.
You should ask for your money back.

Clearly there is a problem with the springs themselves.

Not sure about the policy on that, but will happily PM anyone that wants to know.

Were both sets from same supplier and was the first setthe originals broken or did someone recommend that you change them. Is this the third or second set on this car

Does Ireland get a lot of snow and dump tons of salt on the roads?!