Due to the time frame involved, I will keep this short. Am referring my situation to the Calif. Bureau of 'Repair as my mechanic has been in possession of my motor for three years without performed any work. he finally sent an written estimate of $22,000 for a overhaul, after a request in 2019, over two years over ago and an advance of $7000 in 2019… I posted my situation last year and sadly to the lack XJS V12 mechanics, found I had no choices but to wait for him to complete the rebuild. His go to response was “can’t find an engine harness”, which he should have known prior to taking my vehicle and money. The problem with many such mechanics, one never knows when they’re lying or telling the truth, which is why I’ve decided to try and settle the matter via the Bureau of Automotive Repair.
This journey begin on July 1, 2019 and the motor now sits in his shop, unassembled and the body inside my garage per his request 2 1/2 yrs. ago. I ask what would he have done if I did not store the body in my garage. His response was, “you would have to pay storage fees” ( 3 yrs.)…for a condition created my him.
Be vigilant with mechanics, especially foreign car/Jags. I thought I was.

Sorry to hear about about your luck Chaz.
I hate hearing stories like this. It reminds me of when I
First bought my XJ-S. I knew nothing about these cars,
Jag Lovers or Kirby’s book. I took my car into a trusted
Jaguar mechanic for an out of province inspection, 2 years
And $20K later I was able to get my car back and start
Learning how to do a lot of my own work. I’m a mere
amateur compared to a lot of posters here but I swore
up and down (more ways than one) I would not be a
victim of this anymore and learned how to do a lot of
my own work. Funny thing is I probably enjoy tinkering
with the car more than driving it .
I was at our local Brit Car Show on the weekend. They
parked me next to another gentlemen with his 1989 XJ-S
convertible. I was listening to what he had to say about
The car. His knowledge was so lame and the crap he was
spewing was ridiculous. Next thing I knew I had a steady
Flow of traffic asking about and who worked on my car.
The common theme was a few of them had various years
Of XJ-S’s being held hostage at some mechanics shop from
Anything 9 months to two years. One guy nine months
To rebuild a 6 ECU. Why?
Anyway sorry about your story, hope all ends well.

THX Gary. I tried working on my vehicle some 10 yrs ago, replacing a front ‘water hose” near the fan.

Turn out to be an impossible task that causse me to take it to a mechanic at a cost of $700.

Lesson learned I guess. But this after 3 yrs. has become a nightmare which is why I no longer have the stomach

For it and realizing this guy is full of it. I actually read another comment from a former customer

Who voiced the identical situation with him. Ergo, my decision to contact the Bureau of Automotive Repair

Made it clear I needed another source for a resolution.

Am referring my situation to the Calif. Bureau of 'Repair as my mechanic has been in possession of my motor for three years without performed any work. he finally sent an written estimate of $22,000 for a overhaul,

I’ve been away from California since '94 but, back in the day, the BAR was a force to be reckoned with. I suspect it still is. And the field personal know about auto repair; not easily flim-flammed by a repair shop. They’re not merely paper-pushers at a computer screen.

I strongly suspect they’ll be able to help you

Though I have not had skin in the mechanics game - pun very much intended! – for 30+ years now, stories like these still enrage me. I hope that the BAR will help you, and I hope that you will keep us posted on your progress.

Be vigilant with mechanics, especially foreign car/Jags. I thought I was.

Be aware that I know of cases such as yours where the car is returned without various parts, presumably out of malice, but possibly laziness

I think there is at least 2 professional mechanics from USA that use this list that could repair your engine, but it would need to be shipped to them

Its a very difficult situation to negotiate an outcome that suits both parties,
especially if you have made a $7000 down payment, and doubly so if the mechanic is nasty and/or shonky

I have heard many stories of a well-known Jaguar restorer in these parts, that definitely has the ability to do things right, but the amount of unsatisfactory work he has done is much higher than it should be. Dispute resolution with him is allegedly like dealing with the mafia

I would try and take a photo of your pile of parts without telling him why you are doing that, although he may not let you near them

I too hoped to create a situation where there was no malice, but it became clear the mechanic has been either lazy

Or other. Three years is a long time to repair for any repair job. One might think he would want to finish the job and collect his bounty.

very much identical to mine. At least I now know its not personal.

Got his car back. Just one look and you know you would never want to fight him
In the days before CCTV

I think the best outcome that you can hope for on this sad deal is to negotiate with the mechanic to get back what is yours, and pay him what he’s done so far.

Most often, it’s best to cut your losses and move on.

“How much will it cost me to get this sorted out ?”

Is a sensible question to ask

Its hard with the V12s, there is only one mechanic around here who can work on them, but several of our club members have rebuilt their own, not even mechanics

Their was a guy on here recently selling a rebuilt V12, I think his name is @Craig_Balzer

Their was a guy on here recently selling a rebuilt V12, I think his name is @Craig_Balzer

Just read your tale of woe. It turns my stomach.

As Tony commented I am selling a V12 out of an 84 XJS. It is not a complete engine but pretty darn close. All the details are in the ad

You don’t mention what prompted the engine going in for repairs so the one I am selling may not even come close to fixing your ailment(s) – but it costs nothing to check out the ad. You may be able to use this as a base and transplant items from your engine to “Frankenstein” a working unit.

YUP. The BAR guys often mediate and fid soltions each can live with. And, they can comne down hard on scammers.

I don’t know what it is about euro car repair shops, but I have heard more accounts of similar things or cars coming back from an un-finished job after sitting for years missing expensive parts than I can count.
I don’t doubt the power of the BAR but I think I’d have a lawyer by now.

Having spent the better part of the last 15 years hearing tales of woe and incompetence daily while selling European car parts, if you find a good independent shop, take care of them. Or better yet, learn to spin your own wrenches. I can’t imagine having to trust an aging Euro car to anyone to work on it, financially or otherwise.

Or better yet, learn to spin your own wrenches.

Lawyers are also expensive and one never knows what the outcome will be; Lose and you still have to pay them.

I had a good shop but relocated to another area and the shop later decided they no longer could work on xjs for numerous reasons.

When one looks at the xjs engine and lacks mechanical skills, especially for such a car that even mechanics shy away, best to leave it

And hope to find somone who knows the engine…also difficult to find. Unfortunately I could not foresee the future of the xjs.

a V2 is pretty intimidating, as you need to build (or have made), a thick metal plate with lots of accurate holes to remove the cylinder heads

It would cost an absolute minimum $200-300 to buy or make one, much more if you account all time

Only a regular Jag mechanic would have one

The other thing is that no mechanic likes doing something for the first time, it just takes too long

Both the major brake shops in my town will not normally work on Jaguars. We have a specialist Jaguar mechanic, and a few other mechanical shops that will work on them

As the Jaguar owners demographics get older, (and weaker) learning to work on these cars become more of a challenge. Another factor is that kids generally don’t have the passion for older cars as their parents did. Today, it’s computers or iPhones. Cars are just transportation. I would gladly have given my XJS to my son in law. He is a computer engineer who gets an estimate to hang a picture.

Oddly, there seems to be a vibrant Jaguar customising community made up mainly of younger people. From what I can tell they’re pretty keen on the old XJ and XJ-S, though I’d imagine most Jag-lovers members wouldn’t share their enthusiasm! 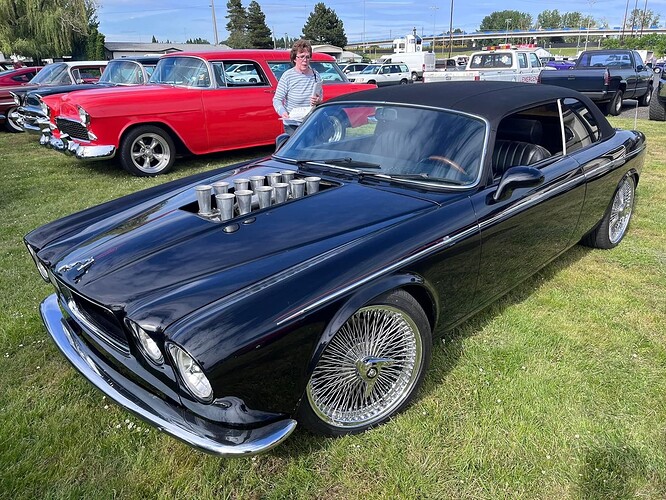