Hiya all, I’m buttoning up my rebuilt engine. The head is from a late XJ6 and has four bolts to secure the cams to the drive sprockets. They appear to NOT use lock washers and the impression left by the bolts on the sprockets shows none. Do I use Loctite or did they just not ever come loose?
Thanks!
Rob

Is there no provision for safety wire?

Properly torqued, they will not come loose.

My bolts are drilled for wire.

No washers. No Loctite. Use wire.

Just removed the four bolts from XJ6 head and each pair of bolts had a rectangular folding tab lock plate under them.

Thanks Jim. I have a pile of new parts, I’ll see if there’s some tabs in the boxes. If not, I’ll have to order them. The old ones on my original head (1968) where drilled for lockwire. I loved doing lockwire.
Thanks.

Thanks Jim but I won’t need them. I discovered that the four original bolts from the 68 head are identical to the newer bolts except for the addition of cross drilled holes for lockwire. I have another engine from a 69 that’s in pieces in my basement. I’m digging through it all for the four other cross drilled cam bolts. As I mentioned, I love doing lockwire, having learned it on old RCAF aircraft (Sea King, Tracker, Argus etc).
By the way, after 17 years of maligning the destitute and impoverished province of New Brunswick, I’m now happy to be here since life is almost normal during the pandemic. Who’da thought it?
Thanks again.

These are the tabs. Two per sprocket. 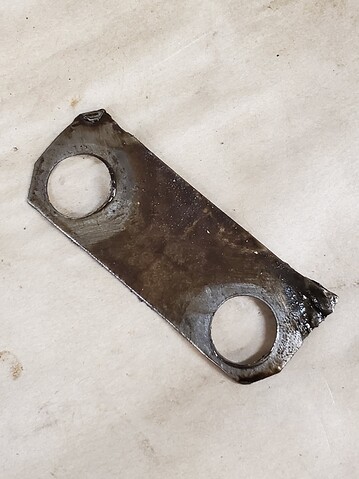 Great. Sent the photo before I saw your note.
Where are you in NB? We are newbies here.

Hiya Jim, Just outside Oromocto which is a 25 minute drive from Fredericton (or ‘Freddy’ as we like to call it). I retired here after 42 years in the RCAF turning wrenches. The intention was to return to civilization but my wife found her dream job here so we stuck. While NB is pathetic, Freddy is a jewel. It’s just big enough to have everything but retains that small town feeling. Because it was a rail hub at one time, there’s now hundreds of K’s of abandoned rail lines that have been turned into gorgeous bike trails, much of it paved. I can cycle all the way into Freddy without using a road. On Saturday mornings I take the old Trans Canada Highway that winds along the St John river, into Freddy for the farmers market. The drive is gorgeous. Because the population is low, there’s few police on the roads, leaving them unguarded. Some of the roads aren’t in the best of shape but there’s soooo many beautiful drives around here with no one on them. We even have a great little British car club here
( https://fabaclub.blogspot.com/ )…
Oh! I just noticed the 506 area code. I’ll PM you with my email and we can get in touch. We do breakfasts on Zoom every Tuesday.
Rob.