Hey everyone,
I’m still away from home, so I haven’t dealt with the overheating issue yet. However, my camshaft casings have been leaking for a while and it’s due to the missing tappet blocks that go above the half moon seals. I’ve search the internet like crazy and can’t find any for sale. Anyone know where I can find them?

I am sorry, I don’t understand your question. Here is the parts diagram. Please identify the seal you’re looking for: 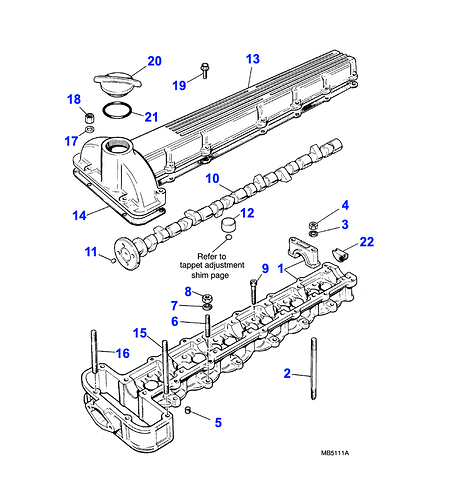 Half moon seals will leak only due to:

The reason why you cannot find them: those are coming as a set with rocker cover gasket…

I would go for the entire set, however true Jaguar Lover will always choose to do some DIY/experiments with f.eg. butter etc.

If gasket/half-moon was replaced recently - degrease it eith solvent degreaser (same as the matching surfaces) and smear some RTV hi temp silicone on those, wait intil starts to settle and install it.

I’m looking for the tappet Block that is used in this link:

It looks like this:
My understanding is that it goes above the half moon seal. Am I wrong? Do I need that part? 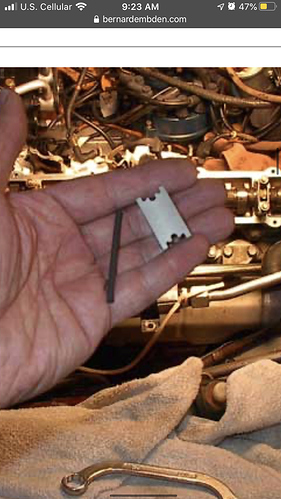 Wow, first time I saw. Is that part of rocker cover? If so - that explains problems with finding. Looks like easy thing to machine…

The problem is that the cam cover gasket, like any other gasket, needs to be securely compressed between two flat metal surfaces to effect a reliable seal. With the soft rubber half moon in place, the gasket directly over it is not compressed properly; it simply deforms down into the soft rubber. This typically results in a leak between the cam cover and the gasket at this point. Experienced Jaguar mechanics learned to address this issue by simply gooping everything here, including both sides of the gasket, with sealant during assembly. They’d typically use blue Hylomar which wouldn’t work long, it would eventually rinse out of the assembly and start leaking. Some sort of silicone worked better.

There are two excellent ways to address the problem more effectively. The first and cheapest is to omit the gasket during assembly and seal the cam cover with a suitable sealant such as Loctite 518. The rubber half moon seal works OK at filling the hole at the rear. This will work until the rubber half moon seal dries up and rots, at least a decade and perhaps two. Reports are that the genuine Jaguar half moon seal lasts a lot longer than the aftermarket item.

The second way is to replace the rubber half moon seal with something that forms a hard surface for the gasket to be compressed against. One idea is to fill the opening with JB Weld or Marine Tex or something similar. Another is the aluminum half moon seal in your photo. The photo shows a half of an O-ring used to seal it, but really that has been found not to work well. The more common method is to seal the underside of the aluminum half moon seal with Loctite 518. The groove for that half of an O-ring has been omitted in later designs.

John_john offers such aluminum half moons these days.

Note also that the screws holding the cam cover down should be upgraded if they haven’t already. The OEM screws are awful. Replace with socket head screws one size longer with a split ring lock washer and a small OD flat washer under each head. Or you can buy the genuine Jaguar screws, reportedly several dollars per screw.

They’d typically use blue Hylomar which wouldn’t work long, it would eventually rinse out of the assembly and start leaking. Some sort of silicone worked better.

My God.
No wonder most of the V12s overheats. Hylomar cannot under any circumstances get in contact with oil/bearing shells

I bet they’ve put the same thing into F-35 hence delays, until they’ve read the datasheet…

Never, ever EVER. Hylomar BLUE is intended for quick disassembly/cleaning, inspection to EASA, assembly… Waterproofing and saling of air leaks, f.eg. instrumentation. The original usage cycle was counted in hours of service, not days or months… The fact that it is resistant to combustion engine products does NOT mean the engine is resistant to Hylomar. Now that’s TheConfusion.

Best thing on the market (with best money value) Visbella RTV high temp silicone. With rocker covers - best to apply on metal treated with silicone spray. Apply, shape, wait until rubberish, put the cover on. No leaks guaranteed (also bonds to rubber). With bare metal it may be a pain to take it off.
Tested, used by IATF approved manufacturers.

My understanding is that it goes above the half moon seal. Am I wrong? Do I need that part?

That’s just the top view of an aluminum half moon seal, the portion that rests against the valve cover. It’s not another part.

Gosh. I must have read the guys website wrong. I spent hours looking for a part that doesn’t exist. I already bought new rubber half moon seals. My understanding is that if I gasket dress the living hell out of the seal that is all I need. Obviously along with the actual cover gasket as well

Gosh. I must have read the guys website wrong.

Yes, it appears you misunderstood the concept of replacing the OE rubber with aluminum. Here is the picture: 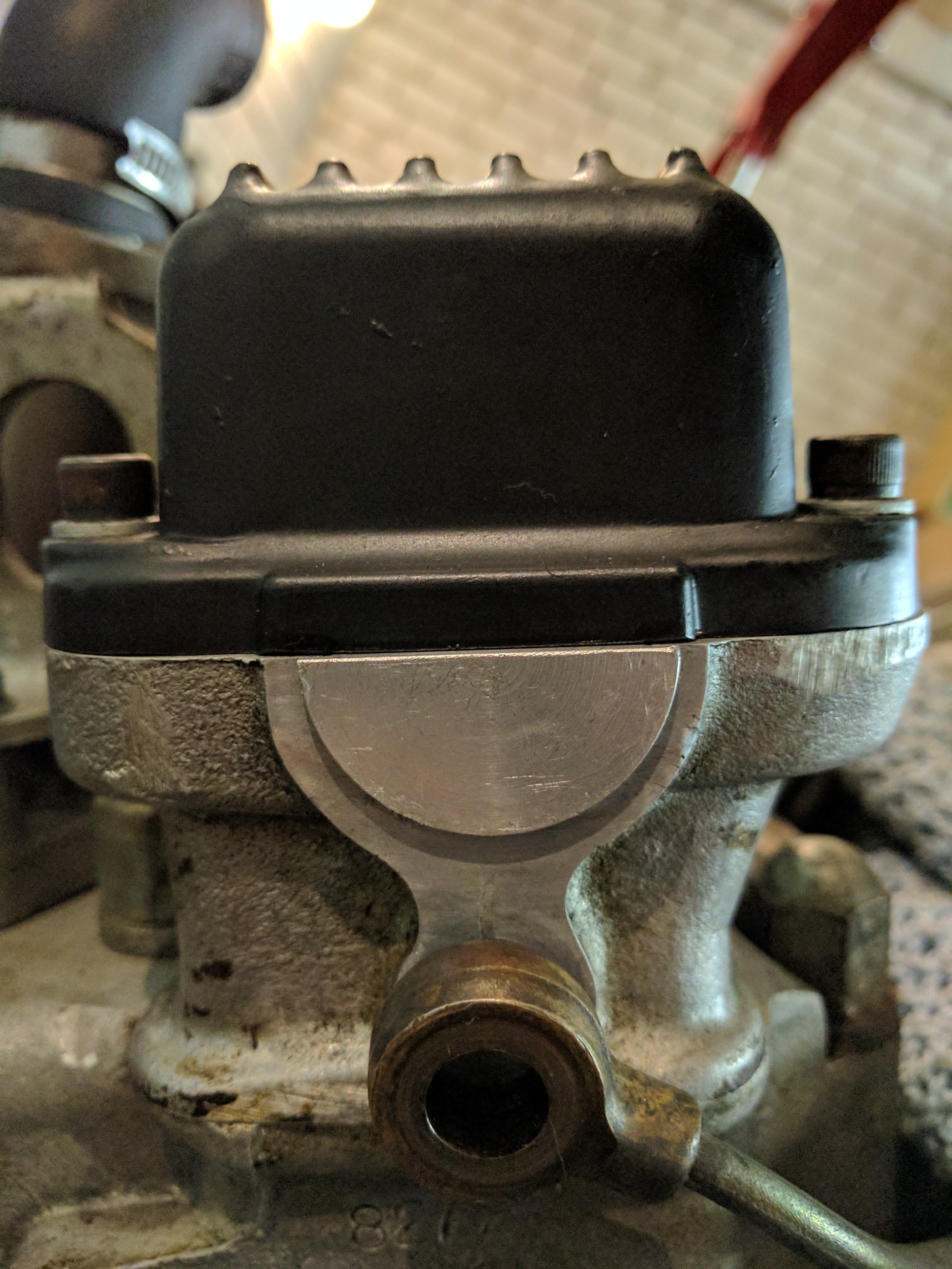 I am restoring Jaguar XJS 5.3 HE and I couldn’t convince myself to use genuine rubber half moon seals. After all the effort that is required to get to the seals and considering the high price of new updated cam cover gaskets I just couldn’t let this seals to leak oil again. As you all know those original rubber half moon seals are doomed to leak sooner or later. So I made aluminium half moon seals. I have made some extra if someone needs them. Just contact me if you need them [image] [image…

Interesting note: More recent Jaguar engine designs come with aluminum half moon seals from the factory. Unfortunately the size is a little different so they won’t fit our V12’s.

I don’t understand how you could have misunderstood my website link.
I don’t usually look at the links ( it’s been a long time) , however I am going to have a look at this one to see if I should clarify it so that it’s more easily understood.

Bernie, the website tracks fine. I just went to it and re read it. Love your documentation and organization.

I looked at the link today and I agree with you it that it seems straightforward. I took the opportunity to enlarge the original scanned images and added some verbiage. But essentially the link remains the same.

I think the big problem is there is a big gap between my generation and yours. Because sometimes I have trouble understanding what kirbys book says and what people say on forums. My generation talks in a different way and not everyone in the forum is from Wisconsin or America

Colin
I think your point that not everyone is from America is valid.The good news is that, of all the lists that I belong to, this list is by far the most patient. It might take some time, but the contributors on this list ultimately help you solve your Jaguar problems.