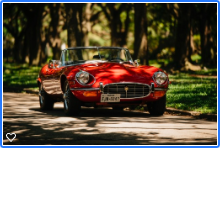 About the seller 61 years native Houstonian. Engineer. I was told at a young age I would need to work with my hands or else spend much time in the garage in my leisure time. This has held true.
Why a 1972 E-type? I had an experience at the age of 16 in a Series III E-type. That drive was exhilarating and left an impression that will never go away. More recently, my need for a challenging project prompted the search for this car. After performing a mechanical restoration on a 1972 FJ40 Landcruiser and completing several sessions of restoration courses at McPherson College Summer AR Institute, I felt prepared for the challenge.
Why sell “Lucy”? For me, it is about the journey and not the destination, the project and not the final product. I need another project in my shop.
My E-type. The car arrived in poor condition in January of 2015. It ran but rough. The tires were 16 years old, there was gritty oil covering the entire engine and the underside of the chassis, and the smell of fuel was strong. I spent almost three years sorting out the mechanical issues and had the car running well. Upgrades during this time included: