Ceramic Window Tint, Huge improvement in the inside temps

Wanted to provide an update. I don’t typically do reviews like this but just was blown away so far. I decided to install 56% Nano Ceramic tint (newer top of the line stuff) on my 85 British Racing Green XJ6 on the back and side windows. It wasn’t cheap ($500) but so far I have been Hugely impressed. Tint comes in different levels of darkness and I didn’t want to drastically alter the old school see thru glass charm and the 56% you can just barely tell it is tinted. It is much lighter than what any oem modern car tint has.

Little back story, my grandfather bought the car in 87, gave it to me and my father when I was 16 in 2003. We did a major restoration at that time, new interior seats, carpet, repaint, suspension, etc to make it nearly new again. Also had an 86 VDP that I drove in college (until the trans died during the week of my senior year final exams eventually was parted out to keep the 85 running). After college moved 4 hrs away and the 85 stayed at my parents house and was my dads fun car to tinker with in his spare time, so has been kept in good shape. After nearly 20 years of pampering and (buying another fun car) my dad decided to hand the torch for me to take care of it earlier this year. I have 3.5 year old twin boys and live in South Carolina (typical summer highs are mid 80s to mid 90s), and they absolutely love riding in it until it started getting sunny and hot. The rear seats don’t get a ton of airflow (except for the middle seat) and with the clear glass and the nearly black paint it was a greenhouse and hugely uncomfortable on a sunny day. Didn’t even have to be hot one just sunny. Last straw was when one of them nearly threw up in the car he was so hot (fortunately made it home in time). So I confirmed the AC is blowing ice cold, and I have all 4 fans auto speeds. I usually try to park on the shade and also use a front windscreen sunshield whenever I park the car outside, this make s big difference in the speed it takes to cool off car, but wanted more and want when I am driving the car to not feel the external heat. When it is ~90 degrees outside but cloudy the car is very comfortable, but once the sun came out….

Guy at work suggested some tint as a solution so did some research. I have never had a previous car tinted, so didn’t know what to expect. Would encourage you to YouTube search” Nano Ceramic Tint”, lots of cool demos. It is the newer top of the line stuff that is supposed to prevent a large amount of the heat entering the cabin without needing the dark limo tint. I saw the demos online and at my local tint guys shop. He put a heat lamp against some different tint in a demo booth he had. First was clear glass (what we have) and it was hot, second was standard dyed tint (type of tint that has been around for a long time) and it was a touch cooler, then it was Ceramic Tint which had a large reduction in heat, then it was the Nano Ceramic Tint and I could hardly even tell the heat lamp was on. I know this isn’t an apples to apples comparison, but so far that greenhouse feeling when it is hot and sunny is no longer an issue. We have driven a few 90+ Deg sunny days so far and been much more comfortable. A side benefit is it blocks UV rays so curious if the interior (specially the wood) last longer.

I am not well versed in the different brands of Tint so I assume that other brands would give similar results. My local shop is an Autobahn Tint dealer so the nano ceramic product he offered is branded as i3 Ceramic. Link to the specs. https://autobahnwindowfilms.com/products/window-tint/

It isn’t a miracle maker, where your car is magically cold when it is out baking in the sun in a parking lot, but makes a difference compared to before. Typical interior temp baking in the sun is about 50 deg F hotter the ambient temp. The tint helps lower that some by reducing the radiant heat transfer. I also don’t know if I would have received similar results with the cheaper standard dyed tint, but I am very happy so far.

The other thing I am going to try for more airflow directed at the driver for when I drive by myself it to graft a XJ40 center vent with the original vent (have a couple broken ones). So I can direct the full center vent where I want it, vs having the majority sent straight to the middle of the back seat. 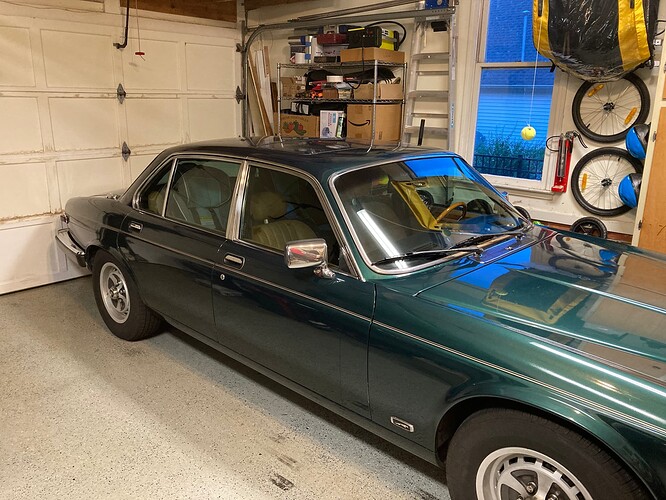