I have a line on a very few . PM me if you are interested

I would be interested in six of them. Thanks.
Charlie Schott

I only have 6 all NOS in their boxes… if you are quick they are yours… there has been a LOT of interest… $500USD +s/h. these are virtually unobtainable today. best wishes Godfrey 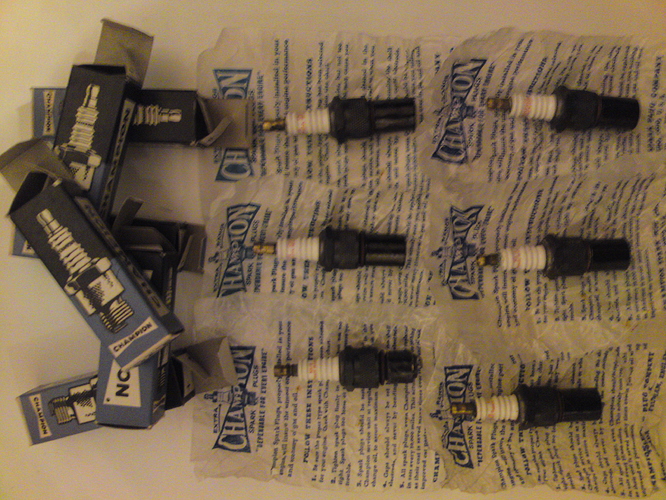 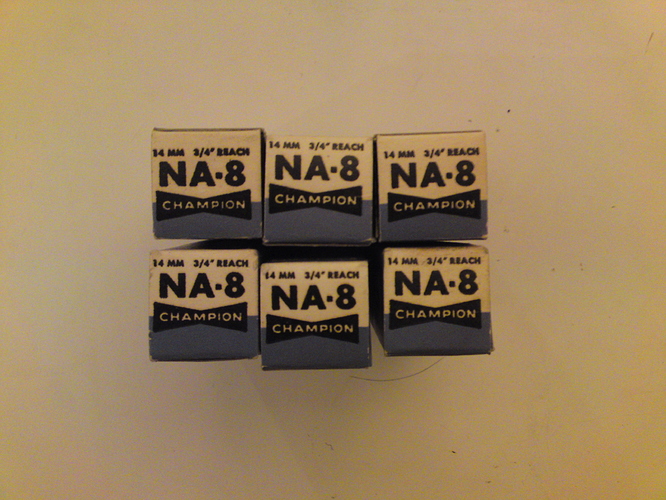 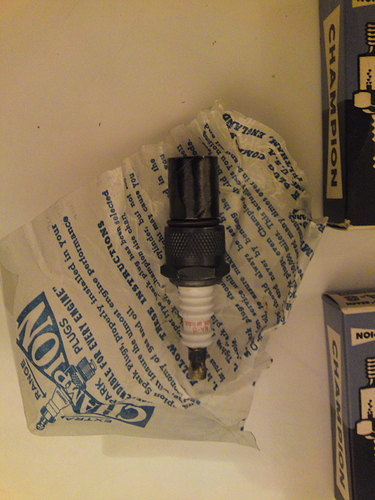 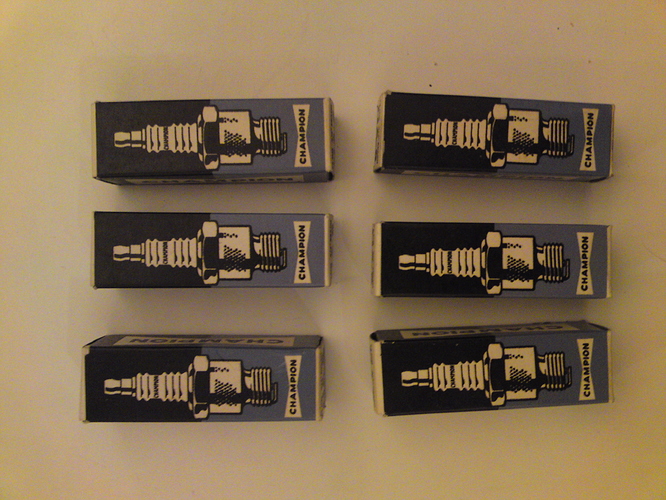 Interesting topic for those into intricate originality detail.
On page 207 (Plate 4-f1) of JAGUAR XK140 EXPLORED, I have fully detailed factory original equipment spark plugs for XK140. These were of all made by CHAMPION, but of course are MADE IN ENGLAND, with MADE IN ENGLAND clearly marked on each spark plug.
My research was best I could do at time of publication in 2010, and at that time I concluded that XK140 with 7:1cr had L.10S plugs, 8:1cr with A-type head had N.8.B plugs and 8:1cr with C-type head used NA.8 plugs.
(There were of course a handful of 9:1cr XK140s and also 7:1cr with C-type head, but I never reliably established what plugs these had ex factory)

In XK140 EXPLORED I didn’t of course go into XK120 Plugs, and indeed those of you who have the book JAGUAR XK120 EXPLORED will see that’s its Plate 4-j5 is merely a direct copy of the XK140 page, and is not specifically correct/relevant to XK120s. But given all XK120s had A-type Heads (no XK120 ever had a factory C-type head), I would expect most likely an XK120 with 7:1cr would still have received L.10S plugs, and all with 8:1cr will have had N.8.B plugs. None would have had NA.8 plugs. I will have to go into this more one day, as Champion was of course evolving/developing their plugs over the XK120-140-150 period, indeed both the XK140 N.8.B and NA.8 plugs were superseded for XK150 with the later N.5 plug. (Somewhat amazingly, XK150 EXPLORED Plate 4-f5 still simply duplicates the XK140 details, and does not rewrite to be XK150 relevant!)

As I said - a very difficult topic; if indeed you want to get into such detail - but if you do get into this detail, you should get it right.
For those who don’t, any number of modern spark plugs work exceptionally well, although I have to say, I still will only fit CHAMPION made plugs, as in my experience they work 100%, so cant see point in fitting other more expensive plugs that claim to be better (Do they really work better than 100% - or is it other parts of the ignition system that potentially can produce a ‘better spark’)

So strictly speaking - and again if such things matter to you - these pictured NA.8 plugs although ‘period correct’ Champion plugs (black body etc) only suit XK140MC, and even then, the pictured six plugs are all MADE IN USA version (as clearly marked in red around the white porcelain - and on box and on wrapper), so not strictly correct for any model Jaguar made in Coventry, England.

Correct MADE IN ENGLAND, N.8.B and NA.8 are very difficult to find, indeed it took me a long time to procure a NOS set-of-six of each. Cant comment about rarity or otherwise of MADE IN USA plugs, as I have never particularly chased them, apart from getting a representative example of period correct N.8.B, NA.8 and N.5 (with some minor evolution in marking and exact structure, but not functionality).

I would be interested if anyone had anything definitive/proof re exactly what factory original plugs were supplied to 1949-54 XK120 - undoubtedly MADE IN ENGLAND CHAMPION, but would love confirming evidence of exact grades across the 1949-54 period, and 7:1 and 8:1cr.

Just thinking out loud…Not sure of the nomenclature back then but I would guess that NA10 is a step hotter than NA8. Racing applications would typically be a step colder.

Over the XK period, what I was able to establish with Champion Spark Plugs, was the following Heat Range of plugs, going COLD to HOT as follows:-

N.18 (was a next half increment hotter)

So yes, your NA.10 was the coldest plug offered by Jaguar suitable for an XK engine, so presumably the choice for certain racing applications, albeit not that I am aware of, ever specifically listed as such, but more likely in certain very high compression ratio application such as record runs etc, rather than endurance racing, but I am sure the Jaguar Competition Department was in close contact with Champion, re most suitable plug for each specific application. Private race teams would have used whatever plug and brand of plug they thought most suitable. But the NA.10 was indeed a listed/available plug and not some special restricted plug, albeit a quick look at my collection listing, I don’t have either an N.3 or an NA.10 in my collection, so they cant be all that readily found. 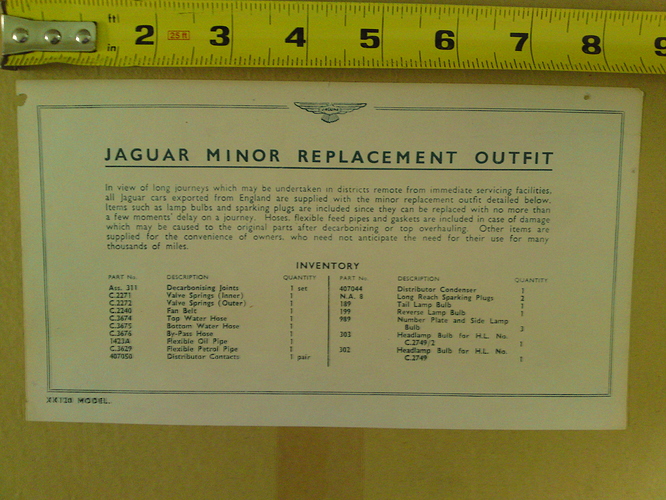 Good pickup Godfrey. As before, I hadn’t particularly looked into XK120, more preoccupied with XK140 as per my Plate in XK140 EXPLORED book (and critical of XK120 EXPLORED that just copies the XK140 EXPLORED page without reviewing/changing to be XK120 accurate).
These second version XK120 MRO labels date from first-quarter 1952, with the earlier first version labels not giving sparking plugs code.

But on now checking - the November 1951 Service Bulletin SB.99 gives all the latest SPark Plug recommendations for Mark VII and XK120 as follows:-

So that answers Grahams question as well, and have to admit, I had totally forgotten about there being an NA.12

And SB.99 re-issued May 1954 introduces the new plug N.8.B, which did of course become the standard plug for XK140 8:1cr with standard A-type Head - which was pretty well the same engine as XK120SE albeit XK120SE was 180bhp, and standard XK140 was 190bhp (I suspect the extra 10 bhp was result of redesigned inlet manifold and improved cooling)

YES PLEASE Godfrey.
You can send me that any time you like.

I’ll leave it to you in my will G 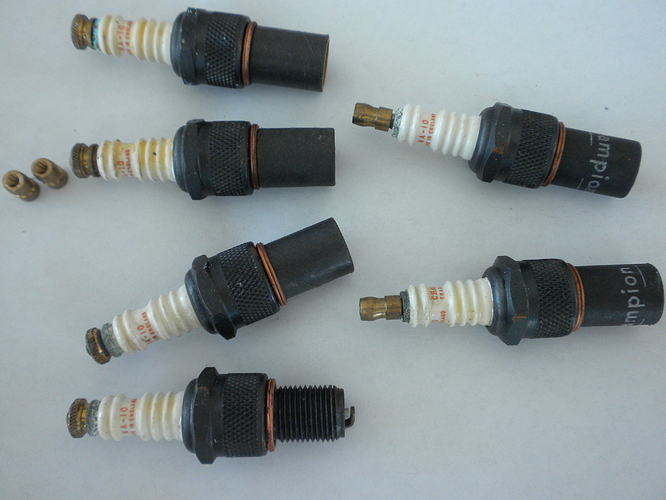 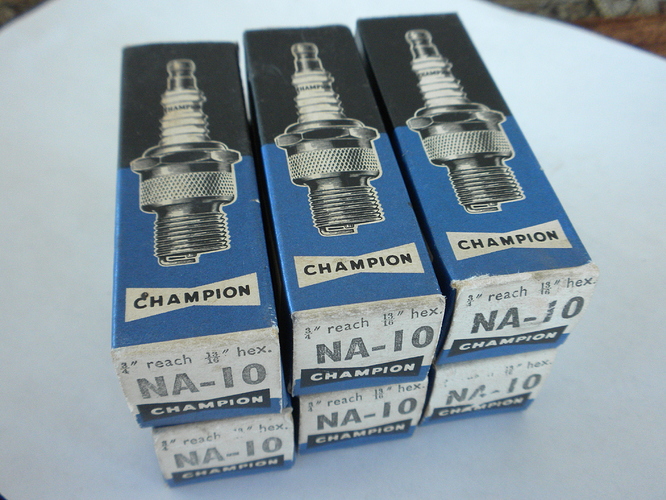 Noticed there is more detail in the image on these boxes.

Your set of six NA-10 plugs look great Graham, and are of course correct Jaguar relevant MADE IN ENGLAND as clearly printed in red on the white porcelain, and are period correct XK120 era with black body (not silver as in later plugs), and have the two alternative screw-on brass nuts. Having the nipple-type (for want of a better term) screw-on terminal was introduced by Champion when the slip on connectors were introduced, with the knurled-round nut to suit earlier applications that had a flat-lead-terminal with a hole included to be secured by the knurled nut onto the threaded plug-terminal. If you decide to break up the set-of-six, I would be interested in getting one example for my ‘Plugs Collection’ - talk to me direct, I may have something to trade of interest.

I note the black cardboard sleeves have Champion in white ink on them, this is typical of very early 1950s, with later sleeves having no lettering added. See photo below of a pair of CHAMPION L-10 MADE IN ENGLAND plugs. These are in fact part of a very complete Mark V 3-1/2 litre Minor Replacement Outfit, that I date as 1949-50, and show the same white Champion lettering.

I don’t know if Godfreys set of NA.8 are later made having no white lettering on card sleeve, or whether no lettering is typical of all MADE IN USA plugs from the 1950s - someone else may comment. Its near impossible to get any definitive/accurate dating on Champion Plugs, even from so called expert Spark Plug collecting circles that I have approached. (Yes, people do collect Spark Plugs as a specific specialty) 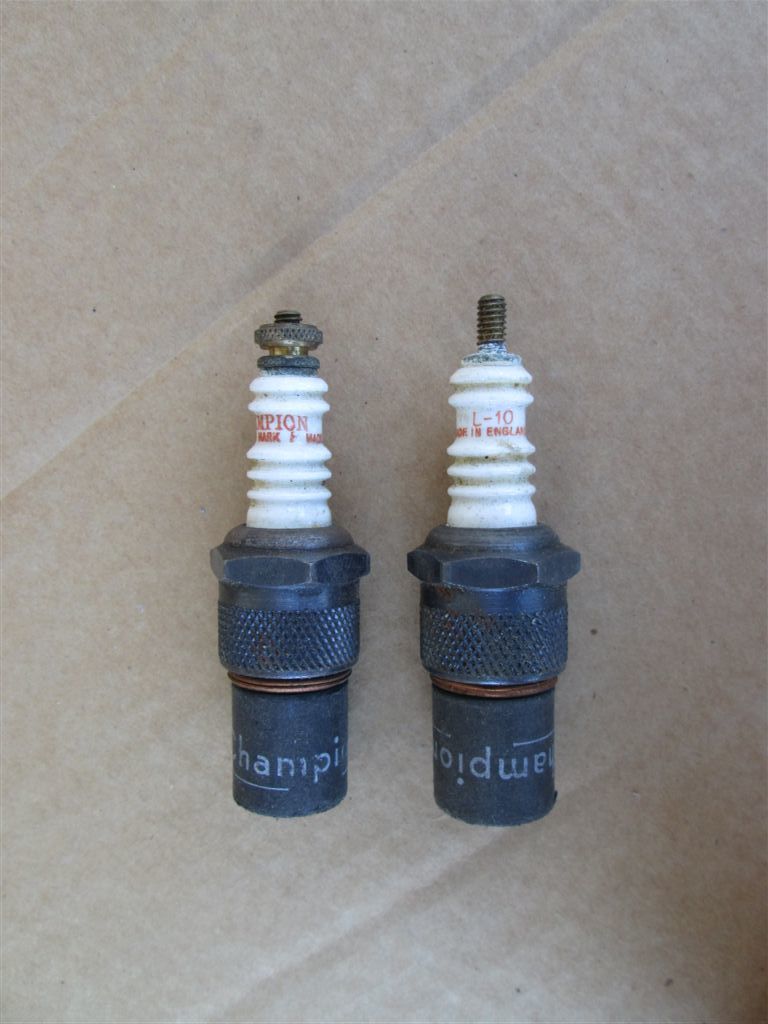 Would you have, or could you tell me who might have, the spark plug terminals that are a split brass sleeves as used on the early XK120s? Thanks.
Charlie Schott

do you mean the small knurled terminal nut as used on the early cars ?If so I may have a few…

I have seen them offered by local Vintage Car suppliers, albeit cant give you an exact vendor contact.
I personally have collected a number of originals over the years, but for my reference only - the new reproductions can be authentic. See photo of these early terminals on a totally original 1951 engine; albeit the plugs are later replacements. Note that although made of steel, and cadmium plated:- 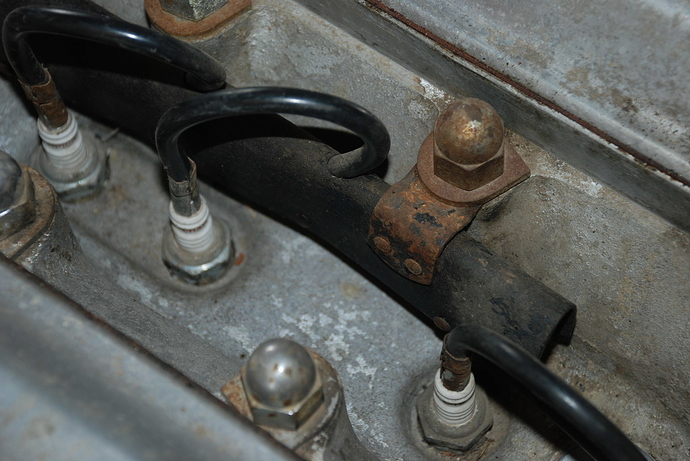 Sorry not a better photo of terminals - pic was taken re the fibre conduit being black, rather than the more usually found red.