This may sound like the most stupid question of them all – no, in fact, it surely is the most stupid question, but I simply can’t figure it out: When changing the fuel feed hoses between the tanks an the fuel pump, does this require draining the fuel tanks? I am not sure whether the pump sucks the fuel from below or if the outlet of the tanks is situated above the level where fuel pump and change over valve reside. Sorry for this naive question – I just want to avoid fuel running all over the place in my trunk.

Florian,
It is not a stupid question and it is a matter of safety so it is best that you asked. Yes, you must drain both fuel tanks if you are planning to remove and replace the fuel hoses between the tanks and the fuel pump. There is a drain on the bottom of each tank for this purpose. Each tank holds over 12 gallons, so if the car is driveable, it would be best to drive the car until both tanks are close to empty and then drain the rest. More than one Jag-Lovers members trusted their fuel gauges to determine how much fuel remained in the tanks only to discover more fuel came out when drained. Make sure you have a large enough containers to hold the drained fuel, and do this in a well ventilated space where there are no ignition sources. I have drained my XJ6 and XJ12 fuel tanks before and drained the fuel tank outside and then pushed them back into my garage once the tanks were empty.

Thank you, Paul! That is what I feared. I already had the pleasure of draining the tanks some months ago, the drain plugs did not seal properly when I bought the car. Should have done those fuel lines already then …

Speaking of fuel lines, I wasn’t able to obtain part no. CBC2179. It’s the fuel feed hose which connects to the fuel pressure regulator (inlet) at the fuel rail. Seems like the item is totally out of stock. The tricky thing with it is that it consists of a short metal part which connects to the pressure regulator and a hose which connects to the fuel line coming from the back of the car. Hose and metal part are sort of clamped to each other. Is it possible to separate them (without damaging the metal piece) and to fit a new hose to the old metal part? Anybody tried that? I think shops spezialised in AC parts use tools that do that sort of clamping, but I am not sure.

Good news is that changing all the other fuel hoses was an easy job.

I once saw a sign on the wall of the board room at Air New Zealand;
The only stupid question is the one that wasn’t asked…… it may save your life!

Yes, it is possible to separate them and use a generic hose.
You could also omit the inlet FPR altogether if you want or if you suspect that it’s leaking, with no ill effects, you just need two fittings.

For the in-tank hoses use only Gates Barricade or any other low permutation hose, otherwise you will have fuel smells. A very good idea is to actually replace all the hoses in the tank with low permutation.

And since you will be there, an other even better idea is to remove the in-tank filters and fit two in-line hi-flow fuel filters before the pump. 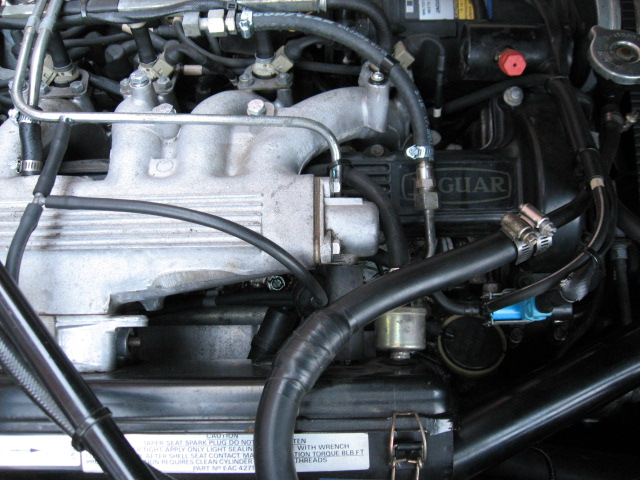 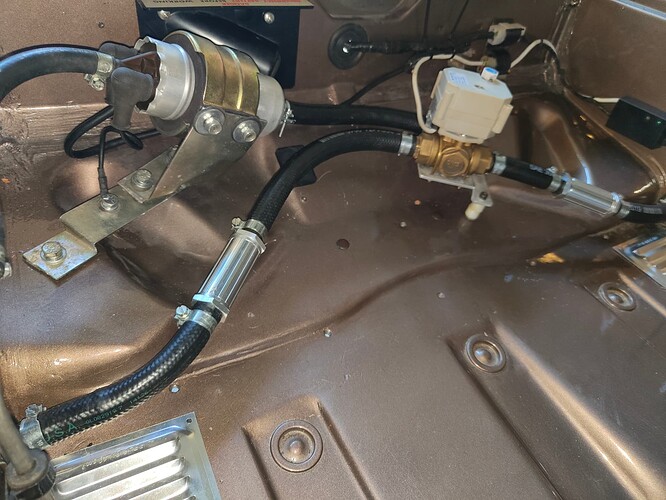 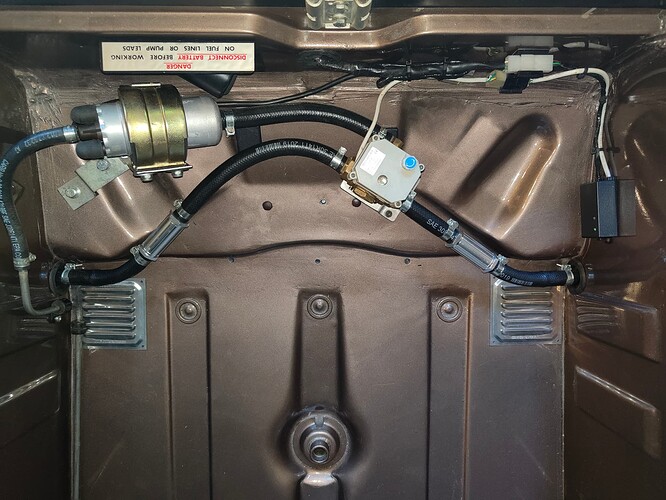 Is it possible to separate them (without damaging the metal piece) and to fit a new hose to the old metal part? Anybody tried that? I think shops spezialised in AC parts use tools that do that sort of clamping, but I am not sure.

**
Crimped connections cannot safely be refitted to new hoses DIY, Florian - an alternative to the AC shop is a a shop servicing hydraulic hoses?

That is a good alternative. However, the crimps will not look the same anyways and we used hose clamps on the power steering hoses with no issues whatsoever. I had concerns (80 bar is a lot after all) but the hydraulic shop said it’s fine.

It depends on the type of the barb under the hose Frank.
The ones in question have the same barb as many other un-crimped hoses of the fuel system in the car.
Not arguing that crimped connections are the safest, and that’s why Jaguar used them, but think that on the injectors the hoses are just pushed in the barb, no crimping nor even a clamp…

On the photo of my previous post, the fitting that goes to the rail is one of the CBC2179 crimped assembly hose. Been there for more than ten years and, said nocking very hard on wood, had no leaks whatsoever.
Since then I’ve replaced the worm screw clamps with EFI clamps though.

Thank you very much for your advice! As for CBC2179, does anyone know the thread size for the fitting that goes into the pressure regulator (not leaking, which is why I want to keep it)? It might be the easiest way to buy a new fitting where I can simply connect a hose using standard clamps, just like on the lines in the trunk.

I should add that my CBC2179 is not leaking at the moment, but the line is rock hard (even with no fuel pressure in it), and that makes me feel uneasy about it. Might still be the original equipment from 1983.

Interesting, yesterday I just replaced the original 1985 fuel lines connecting to the filter and fuel filter. Oddly, they were looking very good…

I used ´aramidis´ (?) fuel pipe that was provided to me by ´Mr. Injector´ when I was preparing an injection system for the E-type V12 based on a XJS V12 parts. I restored all V12 injection components , but I did not went on with the swap carburetors to injection. Well, at least yet. i am affraid of what could happen at the MOT test, now compulsory also for those cars in Belgium.

Coming back to the XJ6, what are the pipes you are taking about @Aristides ? Any special characteristics wrt others, eg, odors ? I do want to change the remaining pipes attached to the tanks and fuel pump, i noticed than on mine the pipes are protected by a soft isolation layer, or they are ´special´ pipes with that soft insulation around them already.

what could happen at the MOT test, now compulsory also for those cars in Belgium.

Give them a call or better talk to them, sometimes they accept it if it adds to safety or lowers emissions, here in Germany it also has to be period correct and V12 PI arrived well within 10 years of E type production, so…

Where is the insulation you speak of?

Whatever you do Rui, if you want to use E10 get Ethanol compatible hose, and definitely low permutation, especially for the boot/trunk, eg odours…
Gates Barricade is both and I’m very happy with the quality.
Before I have used generic fuel injection hose and after using E19 for a while they got swollen and soft… didn’t like it at all.

Thank you @Aristides . Indeed I changed the pipes connected to the filter and the filter as the later hadn’t been changed for the last 20 years -but only 15000km.or so- and the pipes were the original ones from 85.

For many years I had a very unpleasant smell inside the car, which impregnated everything inside the car that went on for days. I could feel the smell on my clothes for a couple if days after 5 min in the car, very annoying. Originally i thought it was due to a leather caring product announced by practical classics magazine (leather etiquete ? Glyptone ? Or something, can’t remember ) but my sister once sat in the car and said that was hidrocarbonets related smell . It could well be . It was impossible to get rid off, even after steam cleaning carpets etc, and it finaly dispeared when I recoloured the seats as documented in an earlier thread and got rid of the foam under the carpets , which probably reacted to the HC molicules and were a possible source of the smell.

I mas say that from 2002 to 2006 the car was closed on a gerage in Italy weird little use while I lived in Holland . 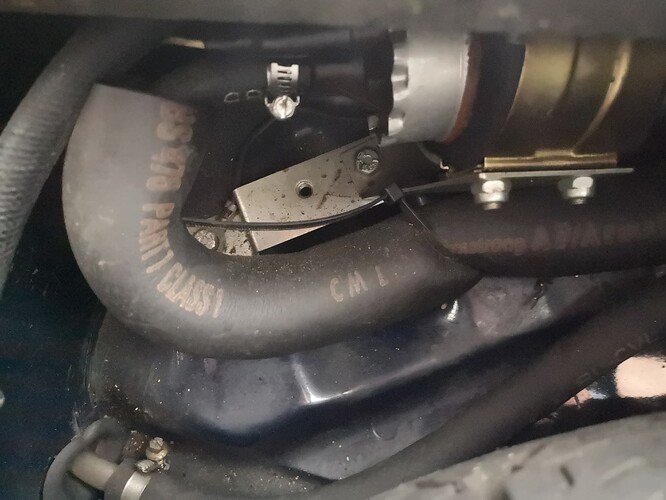 Next photo new filter and ‘aramidis’ injector pipes , let’s see how they perform . 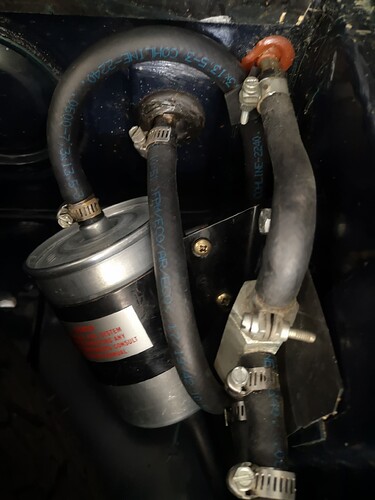 @davidsxj6 David , few things work worse in Europe that the Belgium technical control . Huge lines even whem booking and no dialiogue possible . Only way would be to have the federation of Belgium old-timers to have an agreement with the government but then , which government , considering the different regions in Belgium ? And what would happen if I move somewhere else in Europe ?

Impossible mission, or as they would put it : ‘Pas possible Monsieur’ …

What I can do is to see if in Belgium enyone has done the conversion without going through a homologation.

For the in-tank hoses use only Gates Barricade or any other low permutation hose, otherwise you will have fuel smells

I had heard of “low permeability” fuel hose for marine applications, did some Googling, and came across “SAE J1527 Barrier Hose”. This standard has several rating levels. I went with A1-15 and A1-10 hose. “Ultra Low” permeability (the “10” and “15”) and high fire resistance (the “A1”). It is rated for a working pressure of 100 psi and burst pressure of 400 psi. The idea is to keep the boat bilge as vapor-free as possible. You can Google for more technical info.

I noticed right away that the hose is obviously thicker-walled than automotive hose, due, presumably, to the additional barrier layers. I also vaguely recall the the original Jaguar hose was thick-walled as well, although the J1527 didn’t exist in the 80s.

Anyhow, using J1527 for the fuel hoses in my trunk was one of the best moves I’ve made. No odor! I had previously used “fuel injection hose” (can’t remember the exact brand/spec) and it allowed some permeation. Just enough, mind you, to create an odor.

It depends on the type of the barb under the hose Frank.
The ones in question have the same barb as many other un-crimped hoses of the fuel system in the car.
Not arguing that crimped connections are the safest, and that’s why Jaguar used them, but think that on the injectors the hoses are just pushed in the barb, no crimping nor even a clamp…

Offhand I can’t recall any fuel hoses on the V12 HE, such as seen in the illustration, that are actually crimped. They’re all press-on type. You can carefully cut the hose of the pipes and simply press-on new hoses. This usually means destroying the hose ferrules…so order new ones in advance

It’s the same process as used in replacing the injector hoses. 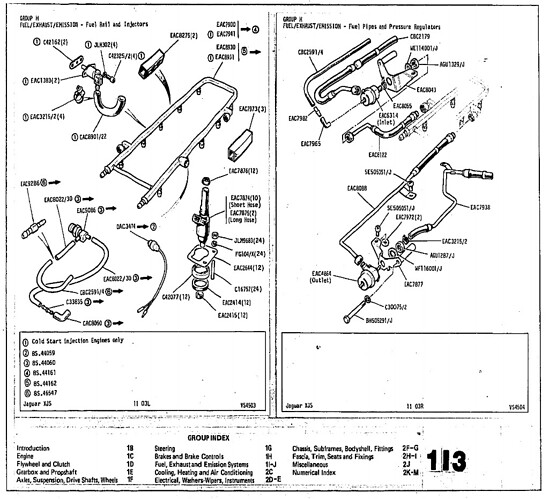 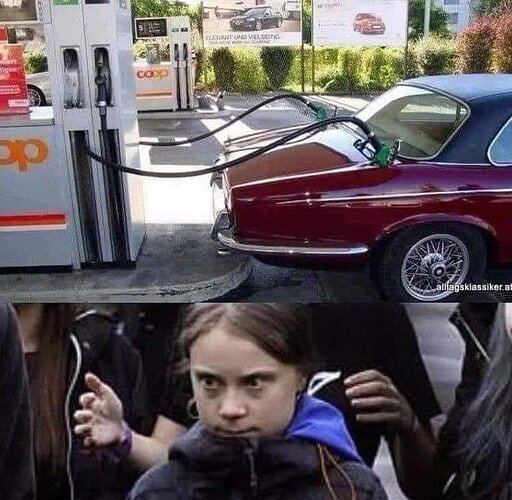