Came across this in Invercargill a few days ago.
It has a two speed Auto box, must have originally had drum brakes as it was upgraded with Discs. 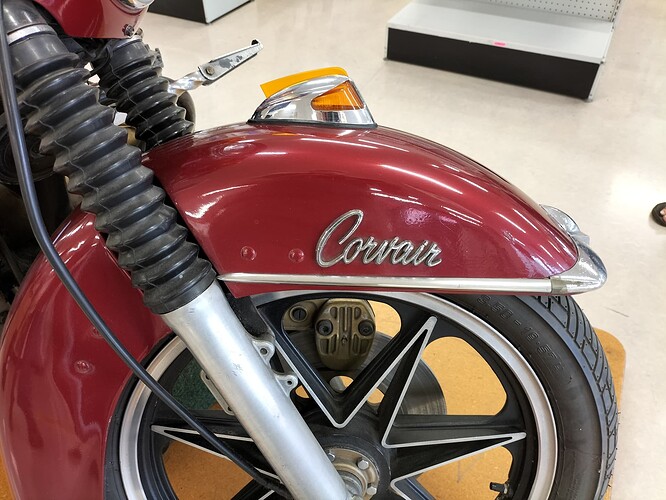 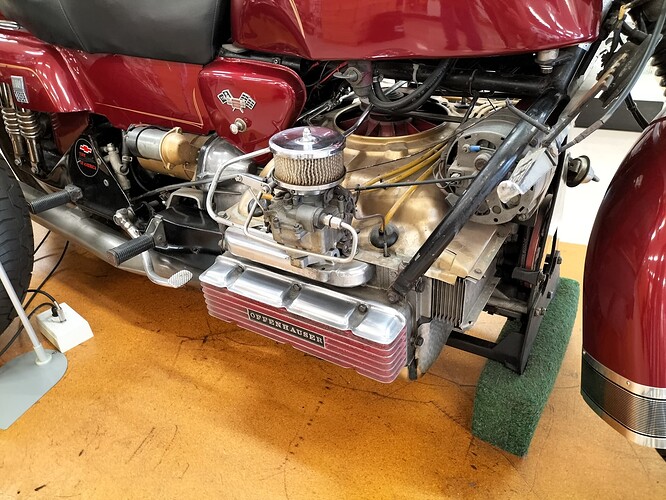 @Robert_Wilkinson will appreciate this! The two-speed is almost undoubtedly an old PowerGlide.

Call me stupid, but I don’t get the heading- Corvair engine and Powerglide transmission. Homemade frame details would be interesting, as would rear suspension/swing arm details.
Plenty of Chevy V8 bikes, there was (still is?) a company making them…Corvair motor much easier.

I didn’t take a picture of the detail plate but fairly sure it said Chevrolet? Can you confirm @kirweekid

A Corvair was a Chevrolet, and they did indeed use the Powerglide two-speed transmission behind it.

I’d like to see the rear. Is it a trike (there’s a tire in view at the rear)? The factory power train is, from rear to front, engine, flywheel or torque converter, diffy, tranny. A shaft from the torque converter passes inside a hollow shaft in the diffy to the PG input, then the PG output feeds back to the diffy via the aforementioned hollow shaft. I can’t find the diffy or PG, nor the way the diffy feeds the rear wheel (s). Also looks like the pancake six will hit the ground with much of a tilt.

I googled; seems to be a bunch of Corvair bikes out there.

No its a bike not a trike, agree its a straight line cruiser very little ground clearance once off upright.

A Chevy inline six powered trike with power glide was attempting to join the 200 club at Bonneville in the 50’s.

A tank slapper at a speed in excess of 130 mph caused the machine to bounce around like a jack from the jacks and ball toy.

Fork legs and front caliper appear to be Honda CB of some size, from the '70’s, possibly 500 or 750 judging from the fork gaiters.