Clutch change in mkv with out dropping motor

Hi all, I’m wanting to know if anyone has attempted to remove the gear box to access the clutch in a 3.5ltr mkv with out taking the motor and box out as one unit. I realise that the firewall to engine head is close but is it possible to lower the gear box by tilting the motor without needing to disconnect everything. I do not have a hoist but have a engine lift assembly and ramps. I placed the motor and box in before putting the body on in my restoration a couple of years ago. It would appear to be adequate clearance from the gearbox to X member of chassis with the gear leaver removed.
Any comments are appreciated, thanks Jeffery 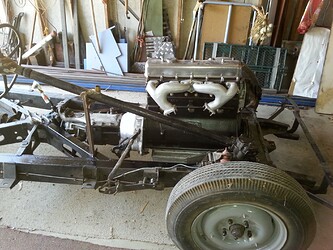 Any body know what this is? Pre-XK

I’m guessing you plan to support the engine in a sling then unbolt the rear engine mount plate, lowering down and pivoting on loosened front mounts…
You will want to put the rear wheels on the ramps to try and get some clearance under there…

I did a search in the archives, and strangely enough not much is said about trying it this way… I could only find this entry…

Hi folks, can anyone advise on clutch replacement methods for the 3 1/2 Mark V Saloon? Three choices come to mind, which ones work? Can the clutch be pulled and replaced by tipping the engine down in back on loose front engine mounts (and pulling the tranny plus bell housing)? Does the engine plus tranny need to come out through the front, or should it be dropped out the bottom as the manual recommends? I’ve ordered the parts for the fun, which way is the most fun? Thanks.– Roger McWilli…

Let me know if you want a hand doing this; I’m happy to drop over and give a hand.

Just commenting, that unlike the later XK engined Jaguars, and especially E-types, where you have to remove them as a unit, the factory ROM suggests for both MKIV and MKV that the engine is removed by unbolting it from the bellhousing. Having done that a couple of times, it is not a big deal IMHO, much much less work than on most later Jaguars, especially the V12’s

and also, once the radiator has been removed (easy and fast to do) there is plenty of room to leave the engine hanging from a hoist or cherry picker for a while to get the gearbox out.

Also when reinstalling, the factory recommendation was to leave the bellhousing bolts loose so after connecting everything back, the clutch and mainshaft could be recentered by operating the clutch several times, like 10 times or more, and only after that should the bolts be fully tightened. ( IIRC)

Hi Pekka, thanks for the reply with the detail and your experience. I will bear in mind your comments re the reinstallation of the box.

Evening Mr V, thanks for the reply, and the kind offer to assist. I thought I would see if any one had thoughts on the web site . Will ring you one evening soon to discuss my reason for the question.

Missed last Thursday due to the wife on her last day of covit isolation and I tested negative Thursday morning , but better to stay away.

I’ve done it several times over the 52 years I’ve owned mine, but always engine and trans together out the front, with a cable hoist in my younger days, more recently with a chain fall, and now a cherry picker, much easier. I don’t really think there is enough room to tilt the engine angle down enough. 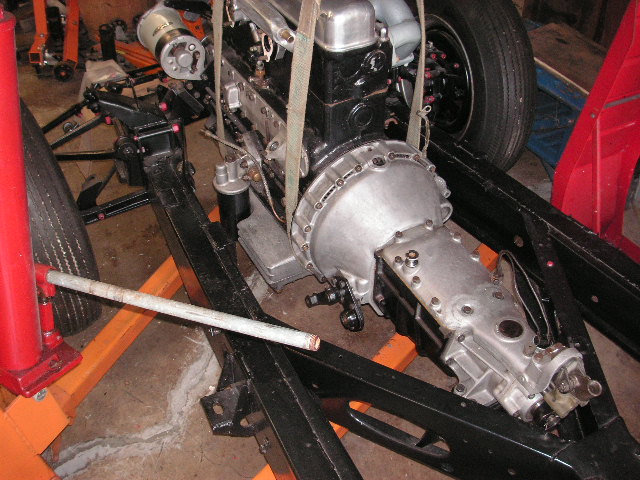 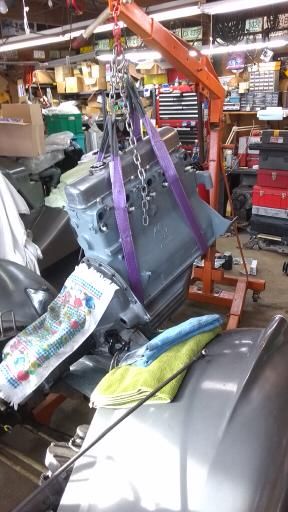 Hi Jeffrey, I’ve pulled a few Mark V engines. First time I had hoped to tip the engine to remove clutch and gearbox. Did not succeed in that approach. The Service Manual for Mark V addresses clutch assembly and refit with a line included on page E.7 which says amid the instructions “Lower engine complete with gearbox through chassis frame.”

I’ve always pulled the engine/clutch/gearbox out through the front (radiator removed) for any major work on engine/clutch/gearbox. I use a cherry picker and nylon straps with the car on strong, adjustible jackstands so height range can go from on the tires up to as high as needed. The engine/clutch/gearbox angle coming in and out can be 45 degrees to vertical (or more?) for part of the motion. The assembly is just too long and heavy for me to pull the bell housing and gearbox under the car, I don’t have a lift or tranny jack. And since I don’t have a lift, I can’t conveniently drop the engine out the bottom of the car like the service manual recommends.

I’ve only once fitted an engine and gearbox to a MkV but looking at the photos I took at the time I would have thought that it was not possible to remove the gearbox with the engine in situ. I have done this in my SS Jaguar and think it could also be done in a MkIV but in my case I took the front seats out and removed the gearbox upwards into the interior but this depended on disconnecting items such as exhaust systems, engine controls and being careful not to damage the radiator.

Looking at the MkV photo the archway in the bulkhead looks much smaller in the MkV than in the SS or the MkIV so it doesn’t give much freedom to raise the tail of the gearbox clear of the chassis and looking at the front members of the cruciform it looks as if the engine would need to be canted down at a considerable angle and there just isn’t enough clearance between the head and the bulkhead. 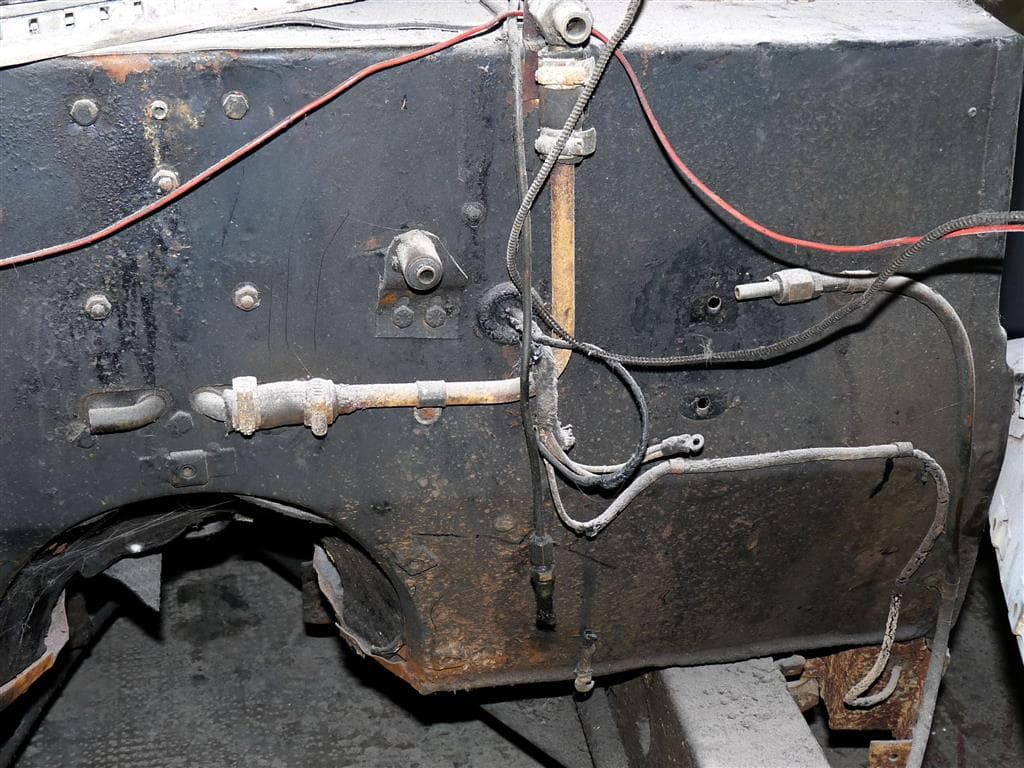 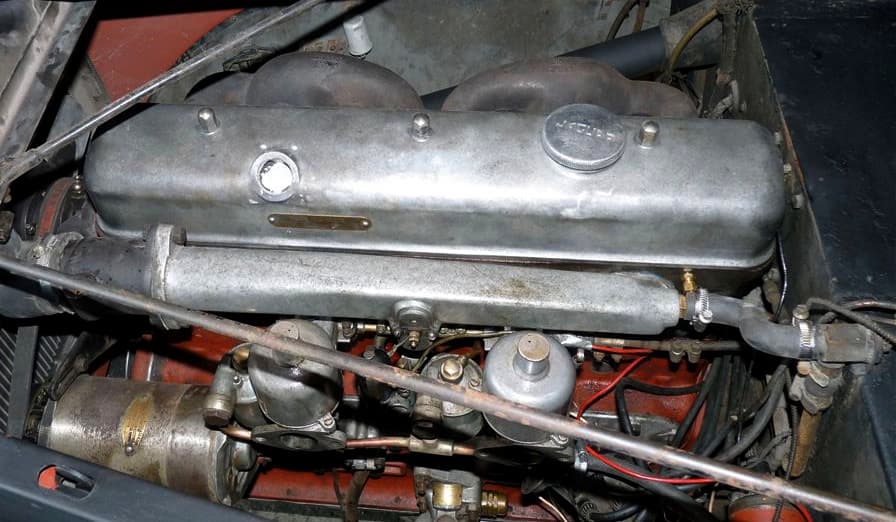 Hi Peter,
You are right - it is very snug between the back of the head and the firewall. 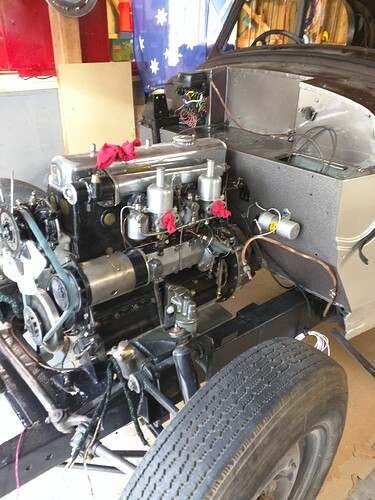 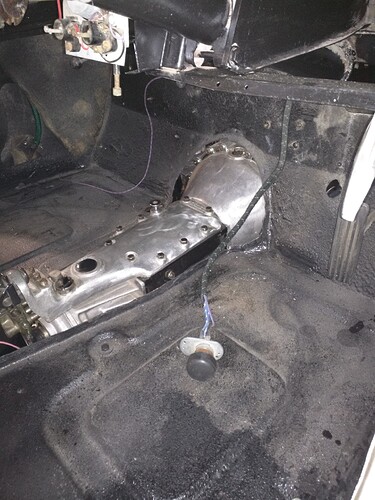 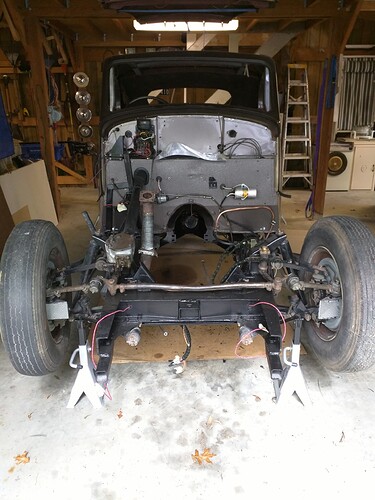 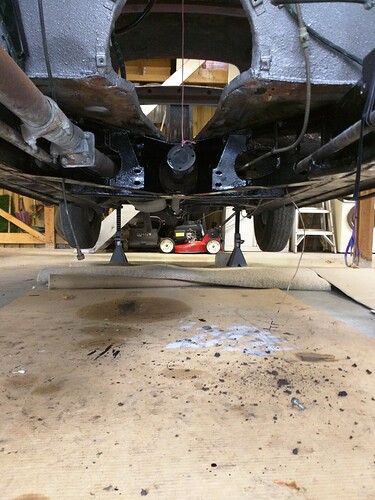 Seeing the pictures of the tightness of that engine and the closeness of the bell housing to the opening, I must’ve been unconsciously channeling that when I built the jeep!

I found this photo that suggests the rear of the 'box should clear the chassis vertically, but again I think the firewall is going to prevent the required angle. 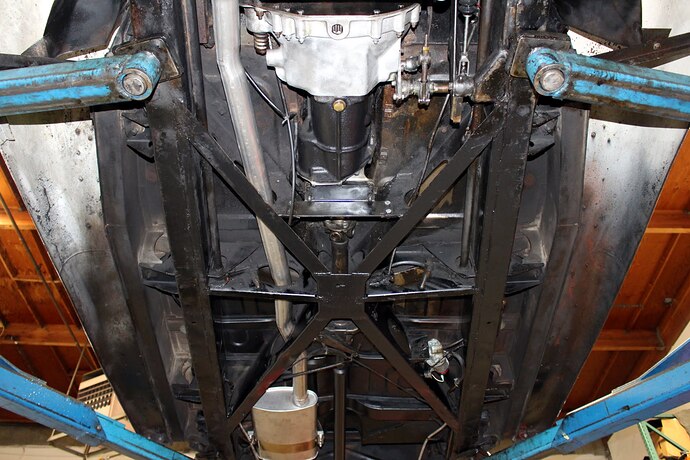 As Peter said, once you hit the firewall, the next move would be to ‘kick’ the bottom of the engine forward, but then there is real danger of damaging the radiator.

Thanks all for the reply’s. I was looking for a possible easier way if I need to change the clutch. Time will depict that. In hind sight a modification to the fire wall upon restoration where the area at the rear of the head on the firewall could be removed from inside along with the gear box floor /cover surround, thus allowing removal of mounting bolts from engine and gearbox, and extraction of the gear box with minimal disconnection of other items on the motor. An Idea for mechanically minded restorers who have got to that stage of rebuild to consider, I probably would have! Hind sight is wonderful. Cheers Jeffery

Only if you are a racer and plan to change the clutch after every race.

I think the factory’s idea was to drop the engine and trans straight down, no angle.

I’m still on my original clutch in the Mark V at 60k miles and on the SS at 97k miles.

of course I dont know about the MKV, but seeing as you presumably dont have to R&R the bumper, bonnet, and lots of other stuff, its probably easier to take the engine & trans out together, as I can assure you that bolting up a clutch & transmission from below, while the engine is hanging at an angle is not much fun at all on any vehicle

I recently did this job, replacing a failed auto trans that had a big transfer case behind it, but the replacement trans leaked oil from the front seal…so had a day off, then did it again

My MK V is now without wings, hood and radiator. When I pulled the engine out the front, it did scrap at a few places. I’m not sure how to get the car high enough to raise the e bigness/tranny straight up. Any suggestions are welcome. Other wise I’ll maybe try to put it back in through the front and repair and paint damage.

Also, anyone know how to change my user name here? I put in the wrong year when I first registered.

Hi Wayne. If you click on your avatar it will open up showing you avatar as well as your basic information. Click on your avatar once again and it will take you to your stats page and provide more information. You will see a drop down box just above “Stats” which one of the choices being “Preferences”. Choose “preferences” and you will see your username “1948jag” with a small pencil icon next to it. If you chose that it will allow you to edit your user name.

Please let me know if that works for you or if you need any other assistance.

Chris,
Thank you so much for getting back to me. Tomorrow, I’ll get the cars number and find out what year it actually is and change it.

If you can lift up the rear as much as possible, and leave the front low, then this will help on the angle. It does feel like you are aiming the engine at the moon when it’s being removed!
Use an engine leveller to do the fine adjustments as you go… 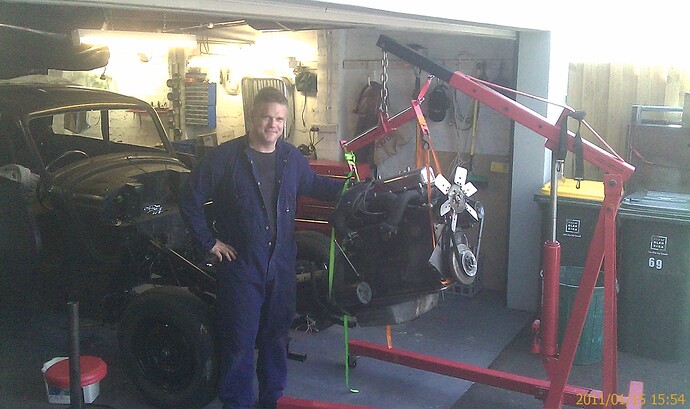 Tomorrow, I’ll get the cars number and find out what year it actually is and change it.

Wayne, if you advise your Chassis Number at least, to me direct at rogerpayne@bigblue.net.au I will advise your correct date…