Ordered a clutch master cylinder for my 69 OTS from Moss to replace my badly leaky original Girling (their part #C27186) and paid for expedited shipping. One week later I received a box labeled MADE IN CHINA, no marking on the unit itself as to place of manufacture. Very disappointed to say the least even though after installation clutch works fine and there are no leaks. Since I don’t have much faith in Chinese products’ longevity or reliability I’d like to order another m/c manufactured either in the US or UK just to have it on my shelf in the event this one fails. Any supplier or manufacturer someone can suggest?

If I were you I would send the clutch master and slave to either of them and have them resleeve them in brass.

One week later I received a box labeled MADE IN CHINA, no marking on the unit itself as to place of manufacture. Very disappointed to say the least even though after installation clutch works fine and there are no leaks. Since I don’t have much faith in Chinese products’ longevity or reliability I’d like to order another m/c manufactured either in the US or UK

That’s about right for a $40-$50 part - made offshore and it’s listed by Moss as Girling type (not Girling) - others may list them as Girling style. The real deal Girling unit is muchos dinero as shown here by one of the usuals. 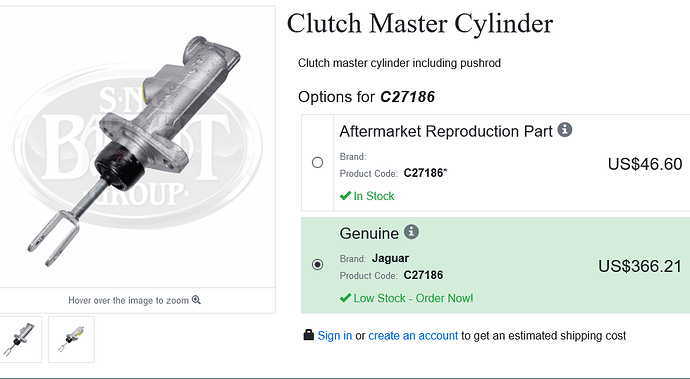 Last year I had my original Girling cylinder sleeved in bronze and am happy with the result but it cost a lot more than $40! Online parts shopping is great if we know exactly what we’re ordering otherwise always best to phone to confirm particulars with the sales team. Today, so many manufacturers, USA or otherwise, outsource their products making it difficult for us consumers to know the country of origin - it may not be intentional but that’s the result.

On the bright side, you were able to source a new replacement unit … and it’s working well!!!

Genuine Girling cylinders are available from Pegasus for a reasonable sum: 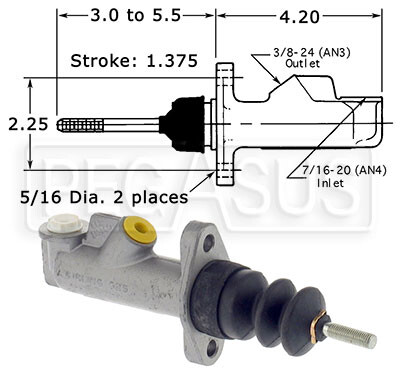 Note: I just linked to random cylinder, not necessarily the one you’d need.

I installed the same part from moss on my 70 2+2 last month. I hope it holds up. I kept my old one in case I need to send it to White Post. I can report that with the right combination of extensions and flex-sockets that I replaced the clutch and brake master cylinders independently of each other and without removing the power steering reservoir.

Hi, I have absolutely no faith in any reproduction parts from China. Their rubber is simply the worst! I use 50 year old genuine rebuilding kits and they work just fine.

Thanks to all respondents. It was my intention to send out a cautionary alert to the faithful since I’ve received so much useful information on this site.
It’s just me, I realize, but I don’t like re-sleeving anything and much prefer ALL NEW parts–can’t stand the waiting, the precision work that may or not be up to snuff and the cost which I suspect is high. My irritation with Moss is the lack of transparency as to country of manufacture. I had already seen different sources whose prices ranged from $25.59 (British Parts Northwest) to PEGASUS AUTO RACING ($124.99)–thank you George, so when Moss advertised theirs for $41.99–somewhere in the middle–you guessed it, I ordered from this familiar/favorite/reliable source. From now on, as George suggests, I’ll ask before ordering a critical part–if I can stand to wait for the unending order line prompts.
best to all.

It’s just me, I realize, but I don’t like re-sleeving anything and much prefer ALL NEW parts–can’t stand the waiting, the precision work that may or not be up to snuff and the cost which I suspect is high.

Hi Ricardito,
Sleeving in either brass, or stainless steel makes for a better component than the original, particularly when sleeved with stainless, as there is no further chance of rusting. We routinely have brake master and slave cylinders sleeved for circa AUD50.00 each.

Ahwahnee, if this is not the one that I need for my '69 Series 2, could I trouble you to direct me to the correct one that I need to buy from Pegasus, please?
Thank you.
Ricardo

The one I linked to (selecting the one with the ¾ bore) may work though the boot is not correct for the clutch master and you would have to substitute your original push rod (non-threaded, one-piece w/ fork).

But do not rely on my say-so as I have not bought from them (or anyone, always just rebuilt the old one).

Unfortunately I don’t see a ‘does it fit?’ option on the site.

Odds are, the cylinder and all “hard” parts are perfectly fine. There is no rocket science in there. But I would NOT trust the seals. I would rebuild with known good seals and boots.

Years ago, I had a clutch slave failure just as I was leaving the open house at XKs Unlimited. One of the mechanics stayed late, and installed a brand-new Lockheed slave cylinder. Barely 12 hours later, it failed catastrophically. I removed it, returned it, and they sent another brand-new Lockheed cylinder. That one, too, failed after less than 24 hours. I took it apart, and found the seal was made in China. I purchased a new, name-brand, seal from a reputable vendor, installed it, and it lasted for years.

I took it apart, and found the seal was made in China. I purchased a new, name-brand, seal from a reputable vendor, installed it, and it lasted for years.

IIRC ”Ang Lee” or any Chinese characters on the seal is the warning sign. I’ve seen a few of these as well, usually they have failed pretty quickly after bleeding.

That seal is easily available in good quality, even just from a local parts store.

OK, although the chinese m/c is still working after 1 week, I took apart my original Girling one and the bore looks good and shinny with no pitting whatsoever. So, heeding all of the proffered advice I will go ahead and install a new kit and seals. Who is a reputable US vendor whose seals/rebuild kit I can trust to last? I would be grateful for any and all recommendations from those of you who’ve been through this process.
Again, many thanks.
Ricardo

I’ve bought MGB seal kits from Moss Motors in the last few months that were made in England.

May be worth a call to a couple of the usuals, just to ask if they can tell you where their seal kits come from.

Anybody have any input on these questionable Chinese seals when used with dot 5 (silicone) brake fluid in lieu of dot 3?

I have a friend who is restoring his 66 OTS with new brake and clutch master/slave cylinders he just bought. He will be using silicone fluid.

If the seals deteriorate due to glycol brake fluid exposure (black particles) then the problem is that they’re made of the wrong kind of rubber. A DOT 5 fluid wouldn’t affect them in that case.

I suspect that seals that look dimensionally and physical similar to the originals, but fail in a clean, smooth up-to-spec bore, are made of the wrong material.

Yep: been fairly standard issue on almost all small Formula cars. It’s the same cylinders used on all my Formula Vees.