I was almost ready to be back on the road, or at least I thought I was. I rebuilt the rear brakes and after bleeding the rear (and front brakes) I decided to try to blead the clutch.

Back story on the clutch. It was professional replaced about 10 years ago and has generally worked fine. Not a lot of miles driven since then. When the car sits for an extended time, the clutch pedal would go “dead”. No resistance or engagement of the actual clutch itself. Pumping the pedal several times would do the trick and everything worked fine.

Fast forward to last night and now this morning.

With my wife working the pedal, we tried bleeding the clutch using the method described in the shop manual. Not a drop of fluid would come out of the bleeder valve on the slave cylinder.

I have now completely removed the bleeder nipple from the slave cylinder attempting the “gravity” technique described in other threads. Not a drop of fluid has escaped.

I watched the Moss Motors video of removing the pin from the actuator arm and tried pushing the slave cylinder piston rod further into the housing. The rod would not go further in and of course, not a drop of fluid to be seen.

Perhaps I made a mistake, but while the actuator arm was disconnected, I used my hand to depress the clutch pedal several times, which extended the piston rod fully out of the slave cylinder. I pushed the piston rod back into the housing by hand. Still no fluid out of the bleeder location.

I was going to disconnect the metal line which feeds fluid to the top of slave cylinder, but honestly can’t figure out how to get to it. The goal was just to confirm fluid is getting down there. I’m pretty sure it is, but am running out of ideas.

I’ve seen where people bleed from the bottom up by using a pressurized system. I can probably do that with some tools I have. Any suggestions on a pressure to use?

Any other ideas on what could be the problem? I’m open to suggestions.

Garrett, it appears it has been 10 years since you last rebuilt or replaced the clutch master cylinder and slave cylinders. Since you are having issues, it is time to rebuild them now.
You said that even before this recent issue, the pedal would go dead after a time of inactivity. It should not have done that. That was an indication of an issue. That issue has now caught up to you. You possibly could continue to bleed it now trying various methods, and it may work again for a short time. But, IMO, stop wasting time on it and fix it properly. Either rebuild them or replace them. I would rebuild them, but your choice.
Tom

Are the kits provided by SNG all that is required to rebuild them? It looks pretty straight forward, but I’ve been fooled before. Just a couple of seals/gaskets?

…the clutch pedal would go “dead”. No resistance or engagement of the actual clutch itself. Pumping the pedal several times would do the trick and everything worked fine.

That was a cylinder (likely the master) starting to fail.

Easy to rebuild, if it is the same as my S2 any kit for a ¾" cylinder will work (I used the spare I carry in my TR).

Since a failure is unhandy but not a danger - I tend to rebuild, but do inspect the bores. Might as well do both master and slave while you’re at.

Garrett, sorry, I do not know who has the best kits. But I once did get a kit the m/c cup was too large, so do be sure it all goes together okay. But if the cylinder cleans up okay, I would use it. IMO, I do not worry about it being perfect, just good.
Tom

The most frustrating part is getting it out and back in. Nothing really to the rebuild unless you find rust, in which case you’ll need a cylinder hone.

I might suggest you make sure the bleed port is not blocked with debris. I had this happen on the clutch slave cylinder. A judicious application of a proper size drill bit, by hand, cleaned out the port and it flowed fluid. You do this with the bleed nipple removed.

New master and slave cylinders are ordered, along with a new flexi hose from Moss.

Erica - you talked about it being hard “getting it out and back in”. Are your referring to the steel pipe going up from the slave cylinder to the flexi hose connection? That looks nearly impossible to loosen while the cylinder is in place and my plan is to disconnect at the flexi hose and remove with the pipe attached. I have successfully removed the pin from what I would call the actuator arm going into the transmission housing.

I have not looked at the master cylinder removal yet.

The clutch master cylinder is not that difficult. You may wish to check the pedal return spring while you are at it, they usually seem to break. The slave top line is not that difficult if you first remove the bracket that holds the metal line to the engine block just above the slave. With that lose, the slave (after removing its mounting nuts) can be moved down and the line is easily removed.
Tom

I’m referring to the line and also to the slave itself. On mine, it is easiest to break the line above where the flex line connects right below the carbs, then put a rubber cap on both quickly. There is just enough room to get wrenches on.

The next challenge is reversing all this. The actual rebuild is easy.

Why can’t anything be simple???

Why can’t anything be simple???

That is why you should diddle with the bleed hole before you go to all that trouble. As Erica says, the removal is full of challenges!

I used an ice pick instead of a drill bit and suddenly I have drips of fluid.

I already have parts on order, so I may end up swapping them out later, but for now, I will bleed and see what happens.

Harvey will want to bookmark this page… and possibly show it to his wife.

Garrett, I do not know all the various variations of S1’s. My OTS is a 1967 1.25. Should be very similar to yours. On mine, it was not difficult at all. The two nuts holding the slave were very easy to remove, the slave came off, and, as I said above, with the bolt to the bracket that holds the line just above removed, it was a very easy job. But maybe they are all different. I do not want to get you into a jam. But from your description, the problem is not the slave bleed hole, the MC is weak and not holding. Just my opinion.
Tom

You can also replace the studs with bolts: makes the job infinitely easier.

Mine is an S2 so I do not know if Garrett’s differs, but the slave kit is quite simple… 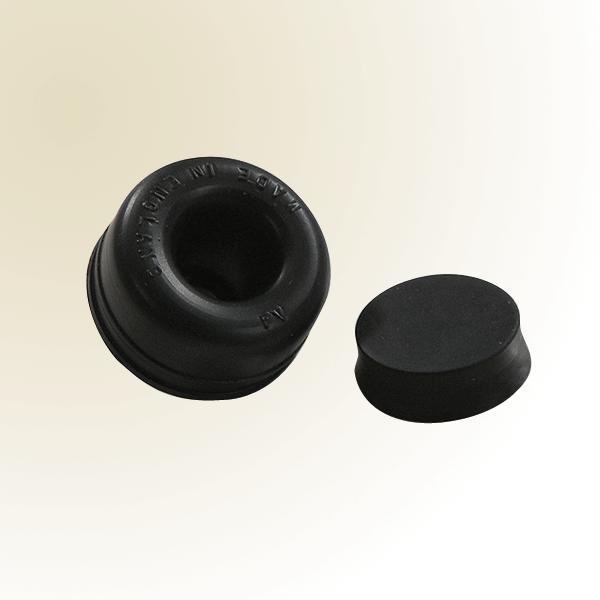 …such that I think one could ‘rebuild’ it without removing it if the bore is okay: 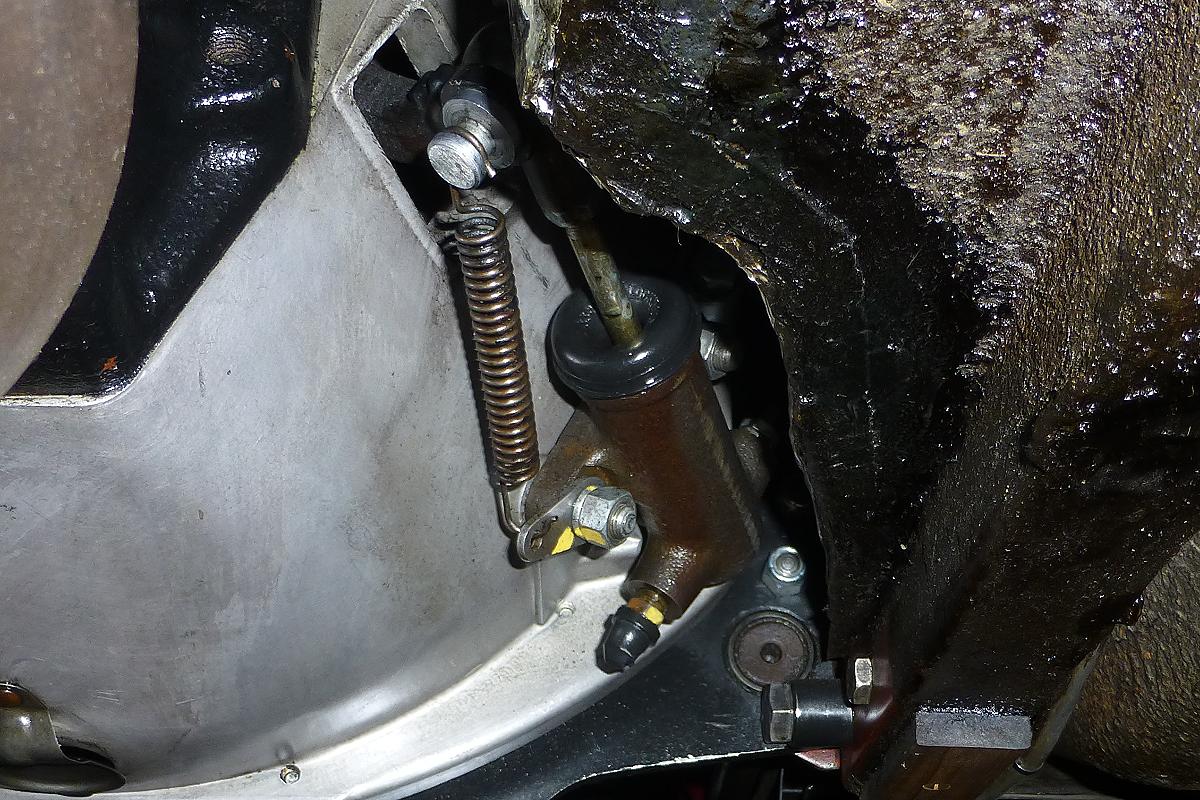 Just use M/C pressure to pop the piston out. I think I have done t that way on an E-Type, I know I have on a TR.

That looks like the same slave cylinder as mine. Replacing the seals in place is a great idea.