at what kind of ambient temperatures do you start your car? My car used to run very rich resulting in very good cold starting and running qualities. - Upon running in the morning and ambient temps at +20°C I wouldn’t need any cold start enrichment. Now that I’ve leaned out the mixture I find I have to engage the enrichment device even after the car has been sitting for just a couple of hours.

So, what I’m trying to say is that if your cold start valve were completely shot and you don’t see +30°C ambient temps I’d be surprised if your car started at all. But there are folks around that are much more familiar with the fuel injection on SIII cars. BTW, is your car catalyzed (US) or non-cat?

The clue is in the name of the part. Cold start valve.

The cold start valve/cold start injector operates only with the key turned to ‘start’…from 0-8 seconds depending on temperature.

You have cold running problem. A likely culprit, among several, would be the CTS (Coolant Temperature Sensor) for the fuel injection system.

**
This is a symptom of a failed AAV (Auxiliare Air Valve), Mary

Locate the AAV, bolted to the inlet manifold below the AFM. A square base with a ‘tower’ leaning outwards, an electric connector and an air hose.

Remove the air hose and look inside; a slide is moved by a bimetallic spring. The slide should be about half open when cold, and closes gradually as the engine warms up - being completely closed when hot. This varies air flow - causing cold idle to be some 200 - 400 rpms above set hot idle…

If the slide is closed when cold, engine only gets air from throttle gap and idle screw and idle is low - increasing as the engine loosens during warm-up.

The slide tends to stick in accumulated goo - you may try prying with a small screwdriver to possibly loosen it up. The slide should move freely back and forth under its spring load when prodded - settling in a position relating to engine temp…

While there may be other issues; checking the AAV is quick and easy. Fuel mixture has little effect on idle rpms - but may cause misfiring if too fat or lean…

I will do this first–thank you very much!

Thank you very much!

Mary,
Attached is a picture of the engine in my 1984 XJ6 Vanden Plas with the Auxiliary Air Valve circled in red. 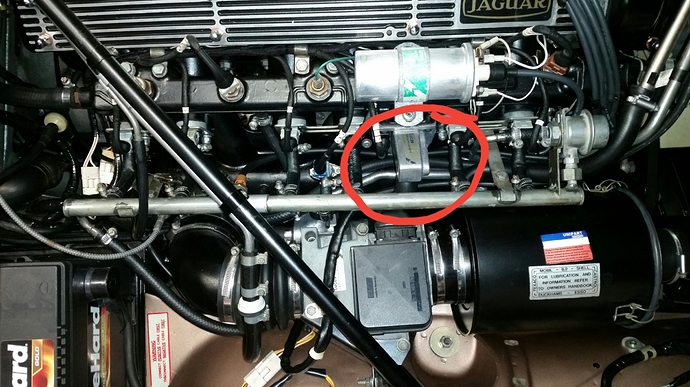 Paul, thank you for this picture–it says a 1000 words. I assume the area I have to work on is the part where it connects to the engine and not the air flow meter? My late husband spoke volumes about this forum. I promised him that I would keep this Jaguar he purchased for my 80th birthday, and I and my son and grand daughter are going to keep it and cherish this Jaguar. We are going to get together this Thursday. I assume we have to take the air filter assembly off to get to this problem? Thanks again all of you and God bless.

I assume we have to take the air filter assembly off to get to this problem?

**
Inspecting the slide only requires disconnecting the hose. Mary…

That’s just to check if the AAV is the problem - verifying that it is (half) open when cold, and closed when hot…

I live in Colorado Springs , Colorado–about a mile up in altitude. The car will start at about 60 degrees featherweight, albeit poorly with a very low idle–bumpy idle which clear up upon warming. Even after warming after a couple of hours the poor idle starts all over again until warming up Sounds like the same thing you experienced, Thank you.

Sorry, if I was a bit confusing: I meant to say that while my engine was tuned way too rich I barely needed any cold starting and running enrichment. I wanted to exclude the situation where two defects kind of balance each other. From what you describe it sounds like your car is tuned correctly, your cold start valve works (a properly tuned engine won’t start stone cold at 60°F without enrichment), but your cold running is flawed. Doug, Paul and Frank will take you to a useable car!

Keep that spirit - it is admirable!

Mary,
I am sorry to hear about the loss of your husband. It is a wonderful tribute to him that you, your son and grand daughter will be working on this Jaguar together. I am certain that the members of this list can help you get it running properly again.
Here are two more pictures of the Auxiliary Air Valve (AAV) that should help you. The first picture shows what the opening inside the AAV looks like when the engine is cold after sitting overnight. The second picture shows what that opening looks like when the AAV is heated up and the internal slide closes cutting off the air.
BTW Jaguar calls this part both an Auxiliary Air Valve (AAV) and an Extra Air Valve (EAV), sometimes using both acronyms in the same document.

You may note that the decal on that part in your car says Extra Air Valve. 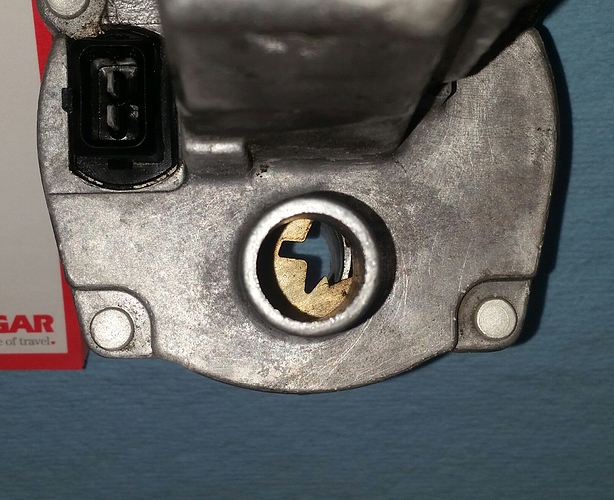 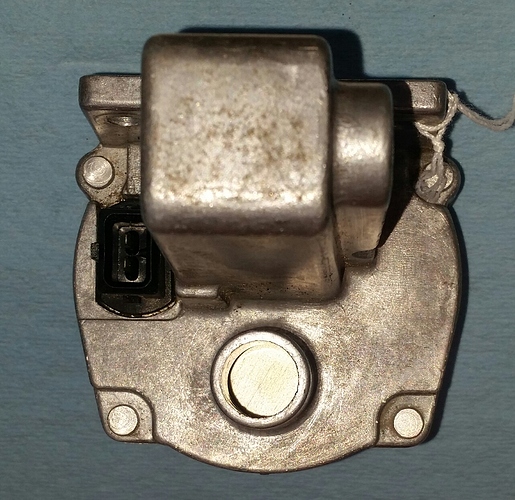 Mary,
I should mention that the hose between the AAV and Air Distribution Block is flexible and easy to remove when new but it hardens with age and can become brittle. If you need a replacement the Jaguar part number is EAC1596. They are available for around $20 through eBay or through any of the Jaguar parts suppliers like SNG Barratt, XKS Unlimited, Welsh Enterprises and others with a USA location.

I saved and will print out a nice color pix of your engine bay for inspiration. Beautiful!!

Any chance you have more pix online for general public viewing?

Today I reached another major milestone in my engine transplant project. I completed all of the engine bay restoration and painting and today I installed the donor engine into my 1984 XJ6 Vanden Plas.

Things went very smoothly with the engine installation but I still have a lot of restored parts to install before I will be ready to start the car up and drive it. The first three pictures show how the restored engine bay looked right before I installed the engine. The fourth pict…

Many in here, Randy. And good inspiration.

Randy,
Thank you for your kind words.

I see that you recently joined Jag-Lovers. Welcome!

I continue to work on this car to fix a small number of issues to get it ready for the next concours on 5 October.

Please take a look at that thread and let me know if you have any questions. It would be best if you reply to that thread rather than hijack this one. I created that thread to document my work and provide a path for others interested in doing similar work on their Series III XJ6s.

The car is still running and looking great and I have put just over 1,500 miles on it since getting the donor engine running in it in April 2019.

My son,daughter and I checked the cold start valve–it looked good. However, we decided to take the Jaguar to the grocery. The car started to lose power, come back to life and then lose power then it stopped all together. We had it towed home. My son used some starting fluid in the air intake as it was not even doing anything before. With the starting fluid the car come to life for a moment or two. My son said the problem it a fuel problem. We turned the key and listened to the fuel pump–no sound of the fuel pump, which we replace about 3 years ago. My son suggested that we replace the fuel repay, the fuel filter and the fuel pump since the car is 35 years old. This would make it reliable. He asked me to contract you all to see if there are parts number for these items. which makes them much less expensive as they may fit other types of cars. My car is a 1985 XJ-6, 4.2 American spec. Thank you all very much and may God Bless. Mary Pat

Someone will chime in if I’m wrong here but I believe you have to hold the airflow meter open slightly to mimic the engine turning over (and drawing air) before the fuel pump will run. The pump doesn’t just run the moment you turn the key.
That said it’s certainly a good idea to change a fuel filter of unknown age.

I will provide those parts numbers later today if somone else doesn’t already. I am not near my Parts Catalogue right now.

How long has it been since this car was used regularly and did this car sit unused outside for a while before you tried to start it? The reason I ask is sometimes when a car sits unused for a long time, particularly outside, water can enter the fuel tanks and a buildup of debris and rust can form on the bottom of the fuel tanks and block fuel filters and the fuel pump when the engine is started. The remedy is to drain the fuel tanks of the old, stale, and contaminated fuel, change the fuel filter, and add fresh new fuel. Just changing the filter won’t help if there is a lot of debris in the tanks as the new filter will only get clogged with the debris.

Mary,
Here are the Jaguar part numbers that you requested:

I provided you a short list of Jaguar parts suppliers in the USA in a prior post. If you have any questions please let me know.