Color of the engine

The engine of my 1950 MK V Saloon, Chassis number 520782, Engine number H 2794 is painted red. Now my question to the forum, is this original or should it be black? I am very grateful for a concrete answer, because if I have to repaint it, I have a lot more work.
I would have liked to include a photo, but I don’t know how.
Greetings to all forum participants
Gerhard

To add photos, click on the rectangle with the up-arrow icon above the text box, then it asks you to browse through your device for the photo you want, which you click, then click Upload. 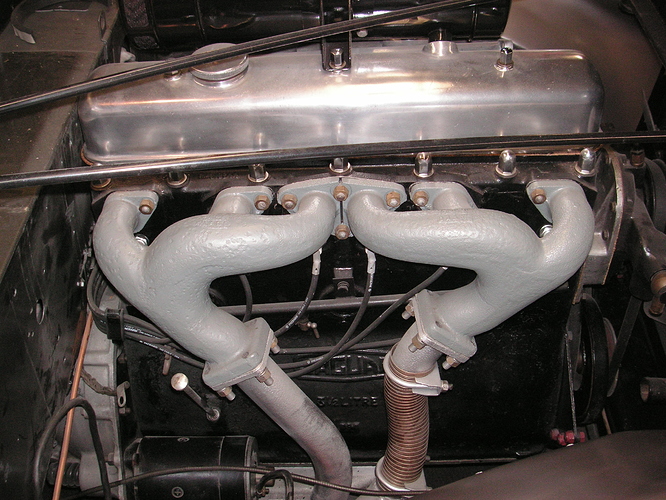 The flex pipe is a nice touch…

The original flex hose was plain steel brazed to the two pipe stubs, but of course it rusted away. I used stainless steel hose with U-saddle clamps, but it does not seal perfectly and there is some noise, so I’ll do something better later, maybe weld them.
The manifolds were coated by Jet Hot, the idea being to simulate new cast iron.

Most engines are black. My recollection is that the block in my current Mark V was red when I bought it about 20 years ago. I’ve painted it black during rebuild. First function of the paint is to reduce corrosion, second function is aesthetics. Personal preference comes into play on the second function. If you want your car judged at a show, maybe double checking what the judging standard will accept would be good. My car does not stand for judgement (and would make all other show cars look great). I like the combo of a red head and black block.

First function of the paint is to reduce corrosion, second function is aesthetics.

And as my wife says, “Black goes well with all colours.” It’s also slimming on most women, but don’t tell her I said that!

Black is the colour for all engine heads and blocks. Sometimes people pick the “Jaguar” name out in another colour. I’ve seen red, white and even gold. None of those are original but I guess you could argue that it’s like monogramming on a shirt or handkerchief! Yes I use them much to my teenage daughter’s horror! 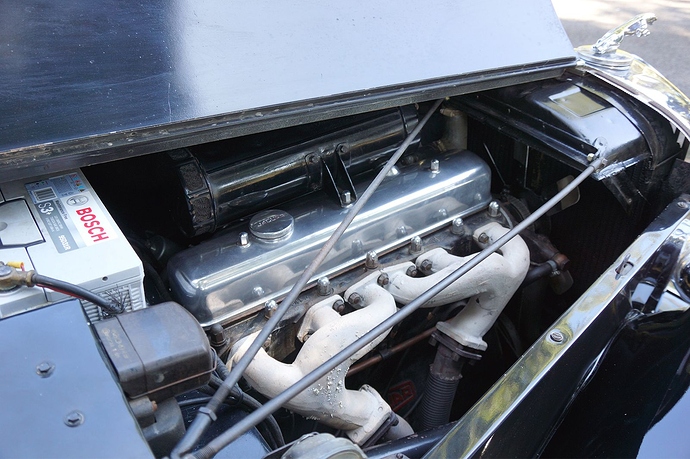 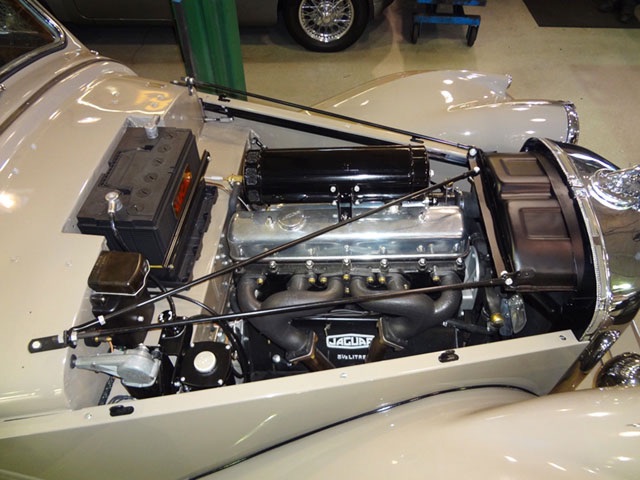 Yes, it’s very certain that the pushrod engine blocks and cylinder heads were all painted black,

The highlighting some restorers use was not normal in production either, the chromed suspension parts and silver & gold etc details were only seen in car shows (bare chassis or engine on display) and no production car had such silly tarting up.

We are about to reassembly on engine Z4135 from a '51 DHC. While there appears to be a consensus on the forum that the basic engine should be black what about the other components like the alloy pieces and the steel front and rear engine plates. In general I’ve see all the alloy components (tappet side cover, oil filter adapter, water pump back plate, Rocker cover and sump) remain natural with natural black oxide(?) fasteners. One Jaguar illustration shows the tappet cover painted but the crankcast breather left natural.
The front and rear plates on original engine appear to be natural finish but that exposes the metal to corrosion. I would prefer to paint it black for protection but don’t want to loose points because the JCNA Judge considers paint or lack of it as non-authentic.
In lieu of having the agreed to Mk V Judging guide, what say you all?

Alloy parts should be left naked. The starter and dynamo are Lucas Special Equipment items and have nickel plated bodies. 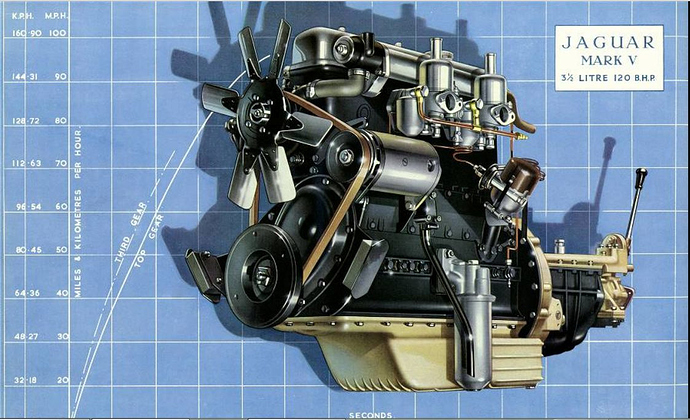 Seem to remember Flatheads being green, and not a dark one?

The picture labeled as a Mark V engine, from the sales brochure, is somewhat deceiving. It has some features of the previous models, not the standard Mark V.
The side tappet cover was cast iron on earlier models, so was painted black. On Mark V it is cast aluminum, so is left unpainted.
The breather housing is also aluminum and is left unpainted, but the tube is black.
The oil filter head is unpainted aluminum, but the steel canister is black.
The oil sump, bell housing, gearbox top cover and rear extension are unpainted aluminum, not gold.
The starter is black.
There is some variation in the generator body, some having been seen plated and some painted a light grey. There was a nickel shortage because of the Korean war. Look inside the body for original color. I found original grey in mine. The front and rear aluminum covers of the generator are unpainted. The pulley and cover band are black.
The front and rear steel plates are black.
The picture shows the damper in the Mark IV position, where on Mark V is was reversed, and the small aluminum half pulley thus visible was unpainted.
Not shown is the aluminum water pump extension casting used only on Mark V, which is unpainted.
On the fan there are two variations, blades unpainted, and blades half painted. Both are shown in the Service Manual. There is no demarcation point known, so take your pick.
So when in doubt, steel stuff black; aluminum, copper and brass stuff unpainted.
Bolts and nuts with BSF thread are black; bolts and nuts with UNF thread are red.
My best guess anyway. This is what has been submitted to the JCNA for the judging guide.

Thank you for your detailed answer. I will disassemble the engine and see what color may still appear under the red one. I will blast all non-steel parts with glass beads, so they should look almost like new again. Unfortunately I had to find out that the fastening for the ventilation pipe is broken. I also miss the vent pipe. So look for more parts.
Greeting
Geri

Be sure to save your fastening for the ventilation pipe. A large fraction of them are broken by too much tightening of the clamp. I have seen them work fine in broken condition and the break may not be readily visible on an installed engine. It may take awhile to find an unbroken one. The vent tube is not so hard to fabricate if you can’t find one.

I’ll be careful not to throw away a broken part before I find a replacement. But, thanks for the tip. Greetings from Switzerland
Geri