This is a follow up to the Cometic Gasket Thread here:

I’m just about to install the head with a Cometic TJP500 (.059" composite) from Terry’s. But I see the coolant holes are much smaller than the block/head/original gasket. What’s more they are different sizes left to right with no indication as to what is TOP. Can this be right? See below. [IMG_5799] [IMG_5798] I also notice on the SNG site that the Payen gasket looks original: [SS 411] Whereas the uprated Cometic has the small coolant passage holes. SNG does note the larger holes ar…

My next thought was maybe leaking valves or head gasket. Since Coventry West did the head, I doubt it’s valves. But to be sure I brought #6 to compression and listened through a hose to the intake and exhaust ports. No sound. I tried the same through the breather hole and it sounds like the ocean! To me, this sounds like the head gasket and I can’t say I’m surprised given it’s quality. But before I tear it all apart again, is there another test I should do?

If it’s through the breather, very likely it’s from the rings. Both your wet and dry numbers tend to suggest that piston is not sealing as well.

The next test would be to fire it up, with water in it, and then do a dye check on the coolant when the engine is hot.

If it’s through the breather, very likely it’s from the rings. Both your wet and dry numbers tend to suggest that piston is not sealing as well.

That’s a good thought. I’m going to try moving the steth-o-hose around to get a better feel for it and maybe narrow it down. I’m a long way from running. Carbs still need a full resto.

Thanks
Rick OBrien
65 FHC in FL (aka Christine)

Oh, if this is a new engine, I just simply wouldn’t worry about it: on a new engine, it’s not at all unusual to have uneven compression figures.

Yep rings need to be bedded into the bores.

I agree with Paul, the rings need to bed in. Just get it running and you’ll discover the first 100 miles will make a world of difference in how well the rings seat. I learned a long time ago not to idle a fresh rebuilt engine a long time, get it on the road and run it up and down in speeds, never exceeding 3000 RPM. This is probably A controversial subject much like what motor oil to use.

Oh, if this is a new engine, I just simply wouldn’t worry about it: on a new engine, it’s not at all unusual to have uneven compression figures.

Sure, NOW you tell me

In all honesty I was uncomfortable with that craptastic gasket anyway (has a nice ring to it). Took only 30 minutes to disembowel again having all the weird tools still handy. So here it is. There is a lot of oil around this cylinder compared to the others so I do suspect a leak. A lot is on the head and not much on the block. 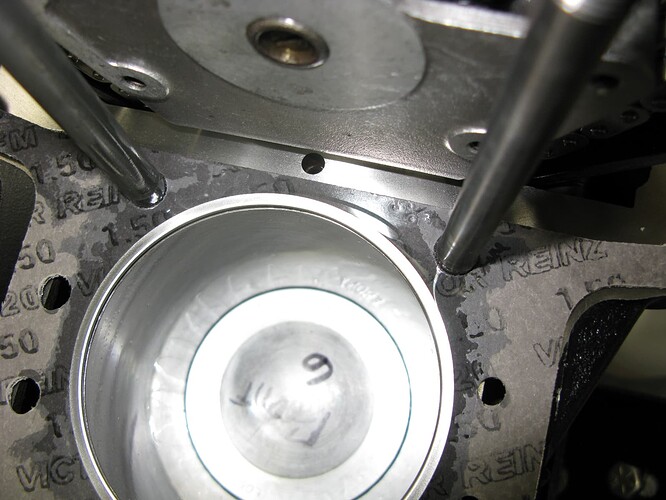 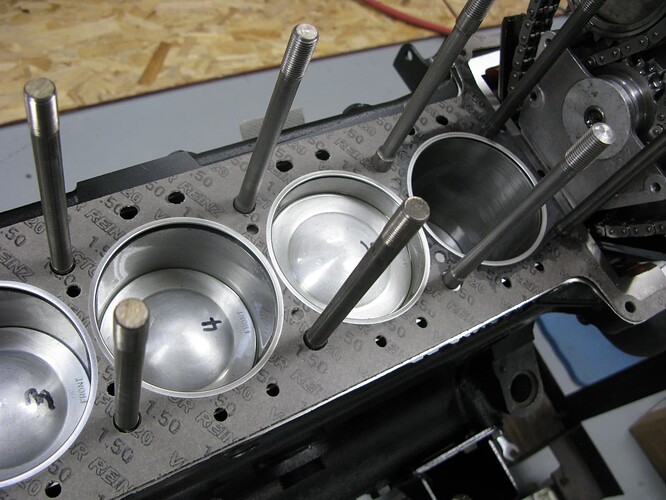 The bore itself looks good. No sign of perhaps a broken ring. 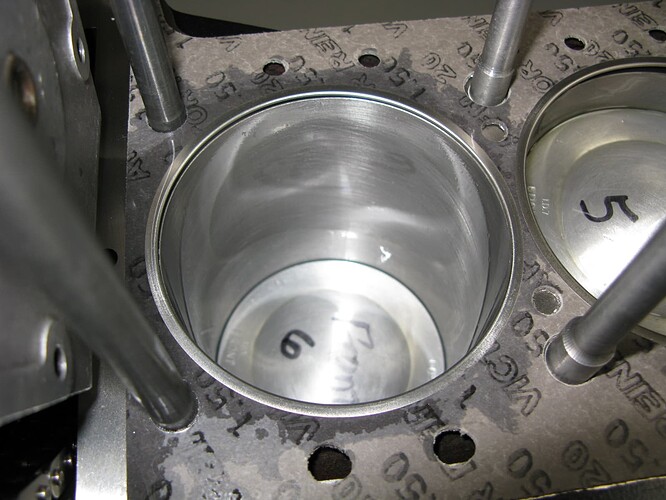 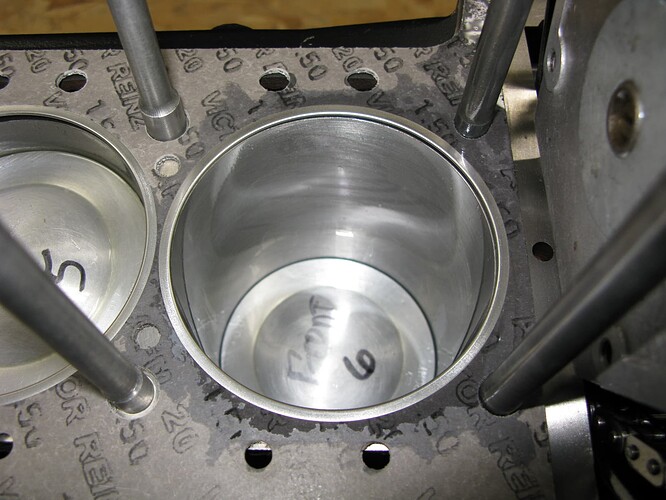 So, I’m ordering a Payen from SNG. I’m just more comfortable with the OEM passage sizes. It was out of stock at the time, which led me down this whole Cometic/Victor Reinz rabbit hole.

All that oil seepage around # 6 looks Verrrrry odd: dumb question… was the deck machined, and if so, was the front cover on the block?

It has been a long time but the two studs seem to have shoulders on it and looks like a locating stud.

Are the holes in the head wide enough to take these shoulders?

All that oil seepage around # 6 looks Verrrrry odd: dumb question… was the deck machined, and if so, was the front cover on the block?

Good question and yes the timing cover and block were match machined.

I did check this and 13 of the 14 had plenty of room to tighten. The exception was the dowel stud which did not sink nearly so far into the block. But even with that, it would tighten to the lift bracket without the washer. But now that it is accessible again I plan to turn another 1/8" of the dowel stud.

All that oil seepage around # 6 looks Verrrrry odd:

I’ve never put oil into a fresh motor, ran it for compression then removed the head gasket and looked at it.

So I can’t be sure but isn’t it just leak of oil out from that bore because the engine hasn’t come up to temperature and the gasket isn’t sealed yet?

Since you have the engine on a stand, as a sanity check, my approach would be to remove the #6 piston and confirm that none of the rings are broken.

If not I would reassemble it with a proper head gasket and not worry about it. You could mic the bore and make sure it’s the same diameter as the others.

My gut feeling is that there’s nothing wrong and once the rings bed in you’ll be fine.

So I can’t be sure but isn’t it just leak of oil out from that bore because the engine hasn’t come up to temperature and the gasket isn’t sealed yet?

Since the oil doesn’t seem to be around the other bores raises a huge red flag.

Could the oil have run out the back oil feed holes, down to the gasket and then across the gasket?
Tom

Shouldn’t have, in a clamped condition.

I am wondering if the seal was perfectly fine until OP went to remove the head. He would have removed the two banjo bolts to the oil lines, then removed the head bolts, and then when he was lifting the head, the oil runs out the oil holes, down the head and onto the rear of the gasket.
Tom

Anything is possible: I’ll refrain from any further speculation, till we get more data.

Since the oil doesn’t seem to be around the other bores raises a huge red flag.

I got the impression it was the only bore he put oil in… I could be wrong.

If it wasn’t then I agree that head face and deck flatness need checking.

I can answer quite a few of these questions.

This is a new build with fresh machine work so the deck and head were both re-surfaced: .005" on the deck and .010" on the head.

The first comp test was done dry then oil was added to each cylinder and repeated to get the wet numbers.

The number 1 bore (at the rear of the engine) has some oil around it too but I saw this happen as the heard parted the block and the rear drain holes cleared. Too my knowledge there are no drain holes in the front aside from the small one in the block to feed the idler sprocket bearing, but that one gets drain oil from the chain gallery.

The engine has never been run so the concern over lack of a heat cycle for curing gasket is valid.

My plan going forward is to install a Payen gasket and shorten the dowel stud top to match the height of the other three long studs.

Great questions and observations everyone. Please keep them coming.