I’m considering converting my 73 e-type an auto trans. are there any good options other than the old turbo 350?

Assuming you currently have a manual transmission in your car, converting it to an automatic box will dramatically reduce its resale value, both because autos are worth less than manuals and also because it has been modified.

Your best course would be to sell your car and buy a S3 auto. You will end up with cash in hand, or the opportunity to buy a car in better condition.

I would concur with @abowie. However, If you want to keep your E-Type; and still want to convert it to an automatic, I have all of the bits for a 4.2 XK6 engine mated to an automatic transmission. Also, I would be interested in your manual gearbox

If your E-Type has the V12 - I’m almost certain the OE transmission is a GM Turbo Hydro 400 (TH400) - which is a rock solid transmission. I’ve put many of these transmissions behind highly modified 327 & 350 V8’s with a high stall converter & shift kits. damn good transmission! The downside is it a 3 speed.

for what ever it’s worth.
Mark

If your 73 isn’t an auto already you have a lot of tin work to do to get an auto into a manual transmission tunnel.

I agree with Andrew and other regarding the conversion. But with regards to metal work to be done, there is none. The S3 uses the exact same tunnel for both the Manual and Auto transmission.

I believe the GM THM 400 wasn’t put to use behind the V12 until 1977 during Series 2 XJ and XJ-S production. Before that the Borg Warner Model 12 was used.

I believe the GM THM 400 wasn’t put to use behind the V12 until 1977 during Series 2 XJ and XJ-S production. Before that the Borg Warner Model 12 was used.

Hello Cedric,
Quite right with regards the BW Model 12. The VIN of the S3 E Type is suffixed with BW (for Borg Warner) if the car was originally built with an Auto Transmission.

@simonsda
If any of the transmissions mentioned in Mark Lee’s Post are contemplated as a replacement, a reasonable modification to the Transmission Tunnel close to floor level will be required. I’m currently in the process of swapping the BW Model 12 of a client’s car with a T700 (4 speed with 4th being over driven) and its a tight fit up high. No modification in that are, but substantial lower down.

cost wise and transport considered , I have contemplated swapping mine the other way (71 2+2).
where are you located ?

The auto trans tunnel is much wider than the manual. They are very different, right down to the point of having a tight space on rhd cars for your clutch foot. I have converted a number of S3 autos to 5 speed manual. Just look at the parts catalog for the transmission cover plate, the auto is a great arch compared to the manual version.

The Mk2 is the same: bigger tunnel for the auto. Paul .

The auto trans tunnel is much wider than the manual. They are very different, right down to the point of having a tight space on rhd cars for your clutch foot

And that is Balderdash that the foot well area of a RHD (pedals) is narrower than the corresponding (opposite side) of a LHD car. They are the same width.

The inner margin of the Left and Right Floor sections both terminate at the chassis rails of the Tub. The following picture show clearly the inner edge of the floor terminating at the chassis rail (RH Side Front of the Trans Tunnel Removed). That’s the forward section of the Chassis Rail where the Engine Frame attaches shown enclosed in the Red Ellipse. 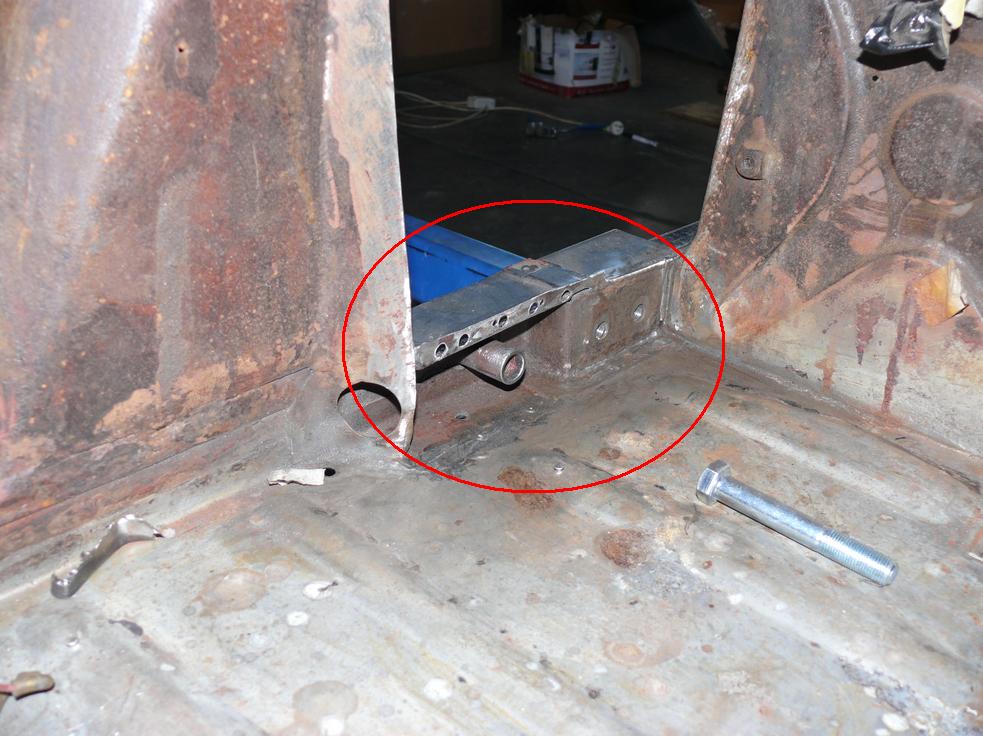 The following picture is the replacement panel installed. 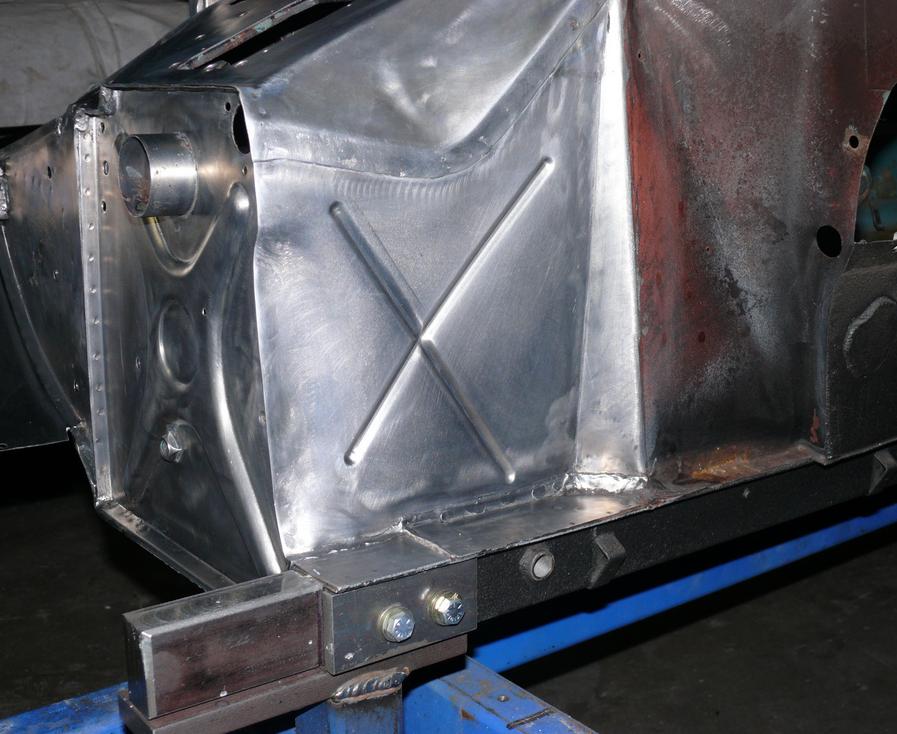 The Lower, Inner member of each engine frame locate into the front of the Chassis rails.
The jigging hole at the front of each chassis rail is 248mm from the Centre Line of the body. .Given that the Inner Sills are also equidistant from the Body Centre Line, then it follows that the width of the floors, left and right, must be the same.

I have converted a number of S3 autos to 5 speed manual. Just look at the parts catalog for the transmission cover plate, the auto is a great arch compared to the manual version.

Well I’ll See your number of S3 auto to 5 speed manual conversions and Raise you the 9 S3 E Types (a mix of Manual and Autos - 2+2 and OTS) I currently have in the workshop for restoration. This isn’t quite my first rodeo.

The Top Cover Plate is different, but that is a removable item. The Top Cover for an Auto, or Manual can be switched between any S3 car irrespective of how it started life (Auto, or Manual) , with no alteration of the tunnel whatsoever.

The Mk2 is the same: bigger tunnel for the auto. Paul .

Hello Paul,
As this Thread is about conversion of an E Type, I take it that you’re referring to a Series 2 E Type with your Mk2 reference. Its true that the transmission tunnel of a Series 2 (and also Series 1) is larger for the Auto Trans than the car built as a Manual; I said as much in an earlier Post. However, its not a case of being the same as an S3. The Trans Tunnel of an S3 Car is the same for Auto and Manual (except for the removable Top Cover).

A friend of mine, during the restoration and conversion of an Auto Series 2 2+2 to Manual, replaced the Auto Trans Tunnel with the narrower Tunnel for a Manual car, because he believed it would give him more foot room. Many think that way, but it is a furphy. The floor width for S2 2+2 cars is the same for cars having Manual or Auto Trans Tunnels. Accordingly foot area all the same width.

I agree with the forum, don’t convert your manual to automatic for all the reasons mentioned.
However, if you are determined to move on with the project, I have all the bits except the gearbox and converter as leftover from my auto to manual conversion. Including the radiator, tunnel cover, selector, flexplate …
PS: The tunnel in the S3 has always be said to be the same in both manual and auto cars.

Bill, I concede you are correct. It must be old age playing with my memory storage.

S3 e type manual to auto trans conversion. I would like to talk to you about your leftover conversion parts. How can I contact you?

Use the message icon, touch the persons avatar and this box will come up; 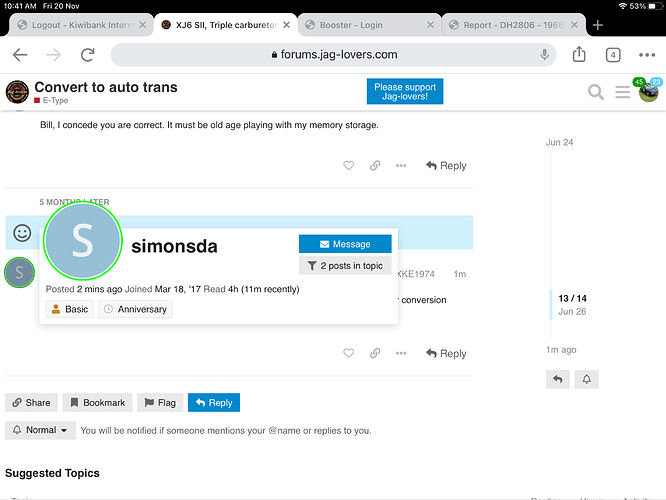 I agree with just trading or selling your manual etype for an auto one. If I hadn’t already swapped out my BW auto tranny for a 4-speed Jaguaranual m one, I’d be interested in talking with you. By the way, that Borg Warner 3-speed auto which was original to the etype is a rugged, reliable one.

It must be old age playing with my memory storage.

Petrol fumes…it’s part of the deal!