Would the convertible cross brace BBC6966 offer a improvement over the BD44991-2 setup?

I’m not familiar with the part numbers you refer to. Are you talking about the X-brace under the front end?

Front end, most had single diagonal, conv had a x brace, are they compatible? The x brace might be more sturdy,

Oh, are you talking about the brace in front of the radiator?

Kirby, yes in front of radiator,here’s a picture off the web. 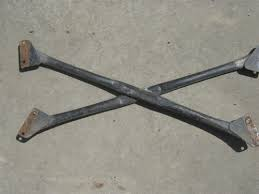 My XJ-SC has the diagonal brace, plus the “ladder” below the IRS. A couple of years ago I was cleaning the bugs from the oil cooler, and noticed two conveniently placed holes, so I made an additional brace from a 3/4 inch bar. Noticed no difference whatever in handling, FWIW! Took it off last fall.

Thanks, I was wondering about whether the handling would improve and keep the front wings from flapping

I installed the Harvey Bailey front cross “X” brace on my 91 conv. years ago. The PITA “scuttle shake” was very consistent above 55 mph before the brace even after frontend work, wheel balancing,etc . Bottom line, it stopped the damn shaking, worked great. BTW I run 60 spoke wire’s from day one with no problem.

When I drove Jan Wikstrom’s XJ12C, the scuttle shake actually scared me! I thought the car was coming apart, like I had broken it or something. Jan had apparently never driven a Jaguar without it, didn’t know it could be any different. But it was certainly nothing like my XJ-S coupe, which has always felt solid as a rock.

I haven’t driven a convertible with or without the X-brace under the front end, but if the scuttle shake is anything like that XJ12C I’d be looking for a fix. Some magazine did a report on the Harvey Bailey X-brace (an aftermarket add-on copy of the brace that comes OEM on later convertibles) which they tested by driving a convertible with and without the brace, and they reported the brace made a big difference. Based on their results, I’d recommend the Harvey Bailey kit or a homemade X-brace for any convertible that didn’t come with one and for any XJ12C or XJ6C as well. But I’m not sure it’s worthwhile for an XJ-S coupe. The car is already so solid that I suspect it’d just be adding dead weight. Same, perhaps, for a regular XJ12 or XJ6.

Thanks everyone. My cabrio feels good, no shake. It already has the same cross brace as the coupe. The convertible cross brace is shaped X, the rest are sorta like a 30 degree angle.
Dave made his own version and reports no difference in handling.
Ill just leave it as is.

For that brace in front of the radiator, I think that’s a good decision. For the X-brace from the later convertibles that goes underneath the front subframe, I’m not as sure. I don’t think the coupe needs it, apparently either the roof or the buttresses stiffens the chassis plenty. I do think the early convertibles need it, probably including the H&E convertible. So where does that leave the cabrio? Really, I dunno!

Is there a club in your area? You might find someone with a coupe – or perhaps a later convertible – and swap brief drives. Based on my experience with the XJ12C, you’d notice the difference immediately – before you reached 10 mph. Then you could make an informed decision on whether to look to install the under-car X-brace.