Working on the 1988 convertible.
Fixed the quarter window motors, cleaned up the hydraulic fluid that has leaked over the years and decided to ditch the old cylinders even 'though they still work.
After all the effort to get at things might as well not have leaky cylinders.

Finding new ones is not so easy. I am a bit puzzled that one Ebay manufacturer “susanb” in New Hampshire has cylinders for H & E, and 1989 on, but not Jag built 1988 car.

Tried Ebay source “britishpartsplace” in Michigan, and they say this:

Discontuned from Jaguar. This is a reproduction part.
Jaguar part number BCC2829. Sold each.

A number of sources claim they make new cylinders better than OEM item.
Is the 1988 cylinder unique ? Hard to see why, and probably used on other cars.
Is this due to 1988 built cars being considered a 1989 model ?

Any help appreciated. Do not want to buy a couple and pay hefty freight bill then find they do not fit.
I have all the important dimensions from the old cylinder.

If you can find anything on UK eBay, I’m happy to help with shipping at actual cost as opposed to a vendor’s potentially inflated cost.

If you can find anything on UK eBay, I’m happy to help with shipping at actual cost as opposed to a vendor’s potentially inflated cost.

Thanks for offer Andy, but no Ebay hits in UK.

Strange nobody else chipped in on this subject, so I suspect:

Could it be the rams are the same and it’S a misconception that they didn’t make an ‘88?
Just thinking outside the box.

I could be wrong but with a production month of September it would have been considered an 89 here in the US which is probably why the US site has no listing for 88 year model.

I could be wrong but with a production month of September it would have been considered an 89 here in the US which is probably why the US site has no listing for 88 year model.

I think you are on the right track Wayne.
Just trying to get the vendors to check my dimensions against their 1989 ram.
Aboot 99% sure they will match.

Could you not just clean them up and install new seals? I would think at the most you would have to do is consider resleeving the cylinder if it shows scoring.

That was my first thought. Tried Ebay but no hits for seals.
The seals might be run of the mill things you can buy from a seal stockist, but they may be a special for this type of application.
I did hear from one “expert” they are throw away items not made to be overhauled.
Seeing new ones are typically US$150 that makes sense.
At first glance does not look like you can just unscrew the top of the cylinder.

How to make something simple complicated.
Got the quarter window motor and mechanism back in both sides.
Disconnected the pump which has no fluid in it.
Hit the “Top Up” switch and up popped the windows.
Hit the “Top Down” switch and I could hear the click of the pump relay but windows did not move.

Oh dear ! Play around with the window relays, and short across relay bases, and it all looks O.K., windows can go up and down.
So the window down relays are not energised by the logic module that controls them when the “Top Down” switch is pressed. I have a wiring diagram for the top circuits from one of my CDs, in colour and looks good. Of course we all know that the car you have may not entirely agree with the wiring diagram you have. Perhaps there is a limit switch or such that inhibits the down function, so let us go looking. There is a limit switch that operates when the top is fully down to inhibit the rear window heater, but nothing else to be seen.

Can the logic module be kaput, because it has an output for the pump ( that works ) and another for window relays. About to walk away in disgust then I thought maybe there is a timer function in the logic module. Sure enough if you keep the “Top Down” switch pressed for something like 10 seconds, then the window relays will drive the windows down.

I guess that is something you never consciously realise. I have operated the top 6 times a year for 15 years and just know the windows go up and down with the top, but never worried about the sequence. It seems the windows go up at the same time as the top starts rising. When the top goes down there is a 10 second delay before the windows go down.
Why such a sequence ? Cannot see any sense in it. 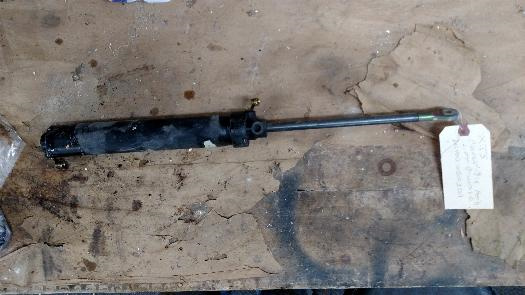 I can try to provide measurements. Let me know if there’s anything I can do to help.

If they match then much as I suspect Jaguar always stuck with the same cylinder size, although they could have sourced them from more than one supplier.
As long as I buy a pair a slight difference in piston stroke will not matter.

The cylinder I have matches the dimensions you provided. I hope this helps you find a cylinder that works in your car.

We have progress, ram vendor in NH also confirmed dimensions so ordered 2 rams @US$125 ea.
With shipping and customs clearance it comes to US$340.

I did order the same ones you did and they definitely seem well made! Unlike yours, mine got here in two days lol!

Happy day, my cylinders arrived 15 days after leaving NH.
They look fine, and for US$125 each good value.
Taking a close look obviously not a repairable item.
Not likely I will outlive them of course, so not to worry.

This will be a busy weekend.

Huh, the ones I got have a two piece shaft and look to be easily rebuildable, unless you were talking about the old ones, then yeah I wouldn’t think it would be worth it to bother trying lol

New cylinders fitted.
Press the rear of the top operating switch to raise the top.
The 1/4 windows go up, but the pistons go the wrong way.

Press the front of the switch, the top goes up but the windows go down after about 8 seconds.
What could be wrong ?

I looked up the handbook for my 1988 convertible.
It has information on the “Power Operated Hood” but I call it a top since hood in North America is what we might call a bonnet.
The handbook says on page 67:
When the top is raised there is a delay before the windows move.
However, in my car they move immediately.
When I press the front of the top switch, there is an 8 second delay before the windows lower.

Something does not add up here.
Yet before I changed over the cylinders, prompted by a window not working, everything worked correctly, Although I had never noticed it I think the windows must have delayed on lowering and not on raising.
Also I am not 100% sure the top switch function was press front to lower, press rear to raise. It could have been other way around and not noticed.
There was some evidence the storage box behind the front seats had been removed before, and not put back exactly as it should be. Maybe the PO had a problem with windows before.

Can anybody with an early convertible confirm the delay function for the windows, going up or going down ?
Does pressing the front of the switch lower the top ?

Mine is a 93 so not early, but there is a delay on the windows going down. I do think the switch should be back for down and forward for up. Did you happen to take the hydraulic motor apart? If the back plate was put on 180deg out it would do that from what I have read

Thanks Jason.
Never touched the hydraulic motor.
So your windows delay on going down like mine, opposite of what my handbook says.
A delay going up makes more sense since the handbook says the delay is to make sure the window seals after the top is raised.

The logic module for the top has 2 outputs for hydraulics UP and for DOWN.
Likewise for windows UP and DOWN.
One of the window outputs has a delay after the top switch is pressed in a certain direction.
So you can change things:
a) Swap the top switch terminals.
b) Swap the 4 output lines from the logic module.
c) Swap the relay coil connections for hydraulics UP and DOWN at the relay stack beside the hydraulic motor.
( Not easy to do that for window UP and DOWN relays, they are too far apart )

One way or another you can get the operation of top and window to rise together, and you could change which operation, up or down, has a delay for the windows.

Still does not explain how I now have hydraulics and windows in opposition on my convertible.
The only logical explanation is I swapped the lines to the cylinder. However I marked the bottom lines before removing the old cylinders expressly to avoid that mistake. Also looking at the hydraulic lines which are semi rigid they look as if they would kink if swapped over. I am 99.9% sure they are right.

The handbook does say press the rear of the top switch to lower the top. I will check later today to confirm that is what happens. In which case the windows are the problem.

I checked the top operation carefully.

Press rear of top switch and the top goes down.
The windows go up immediately.

Press the front of the top switch and the top goes up.
The windows go down after a delay.

If I swap the 2 wires from the logic module that control the windows I will get the correct operation:

Press rear of top switch and the top goes down.
The windows go down immediately.

Press the front of the top switch and the top goes up.
The windows go up after a delay.