I have an interceptor with coopercraft 4 pot calipers. They are light and work well.

I’m interested in an upgrade for a series 1 xj12.

Can anyone advise about coopercraft in this application?

Much easier to just use the S3 4-pot calipers, surely?

The S3 calipers fit the Series 1 XJ6 cars, so they should fit your 73 V12, I would think. On the six, you need to swap out everything between the ball joints. For you, that means replacing vented rotors with different (?) vented rotors. The total cross-section of the 4 pots is the same as that of the S1 3 pot, as is the swept area of the rotors, so the S1 master/booster work fine. The S3 calipers are quite a bit heavier though–more unsprung weight. IMHO.

The piston areas expresses the force, brake effect, applied, equal on both sides, on the disc - and approximately the same front and rear. On the other hand; with a ‘stepped’ master cylinder the ‘front/rear’ balance can be maintained with different piston areas anyway…

Yes, so I just confirmed. I stand corrected. Easy to see from the piston diameters–the small (outer) S1 are 1.588" whereas the S3 are increased to 1.892". For identical piston areas they would need to be the same.

Those numbers don’t quite add up, although they are close. I wonder where the error is.

Yes, so I just confirmed. I stand corrected. Easy to see from the piston diameters–the small (outer) S1 are 1.588" whereas the S3 are increased to 1.892". For identical piston areas they would need to be the same.

…so do the S3 callipers fit onto S1 XJ12 without modification?? … or do you need S3 uprights as well?

Pretty sure you need everything between the ball joints, same as if you were replacing the brakes on a Series 1 six.

Yes, On the Series 1 this would reduce the rear braking contribution substantially. The balance favours the front quite a bit even in stock configuration. I have the parts, but I’m not sure I will do it now.

On the Series 1 this would reduce the rear braking contribution substantially.

How would it end up different than the Series III? Did Jaguar revise the rear calipers or the master cylinder in the meantime? Did they add proportioning valves? Or was this deliberate on their part, like they realized the car needed more front in the brake balance?

How would it end up different than the Series III?

Not sure I understand, Kirbert. If you increase the piston area of the front brakes (S3 calipers replace S1 calipers) then you integrate the brake fluid pressure (which is the same front and rear) over a greater area than before in the front–providing more braking force. But the rear piston area doesn’t change (same pistons S1 and S3). So more force in the front, same in the back means the contribution of the rears compared to the fronts is reduced. The S3 is heavier, so I think they wanted better front brakes. I always thought that meant vented…didn’t know that the pistons are bigger until this thread.

AFAIK there is still no proportioning valve on the S3, master the same (although some claim it is stepped in S3) and same rear calipers. IMHO.

It’s not stepped in the S3. I thought it was stepped in much earlier jags. I knew the 4 piston brakes were stronger.

I haven’t noticed a difference in s3-s1 braking but there has to be more fade with a non vented disc. Some press review claimed the s1 brakes were inadequate but I disagree.
I haven’t driven that hard or fast so far and can’t tell but surely there are many cars with brakes that aren’t as good… I don’t think changing the brakes is worth it unless you have a real reason to.

I think with the longer wheelbase etc. and the heavier car they did want stronger fronts and it was what was available so.

…so do the S3 callipers fit onto S1 XJ12 without modification?? … or do you need S3 uprights as well?

The front to rear balance is not a serious issue, it is the norm on Jaguars as it is for most vehicles,
I modify the rear caliper to take the 4 spot piston, thus returning the balance to that of the S1 XJ 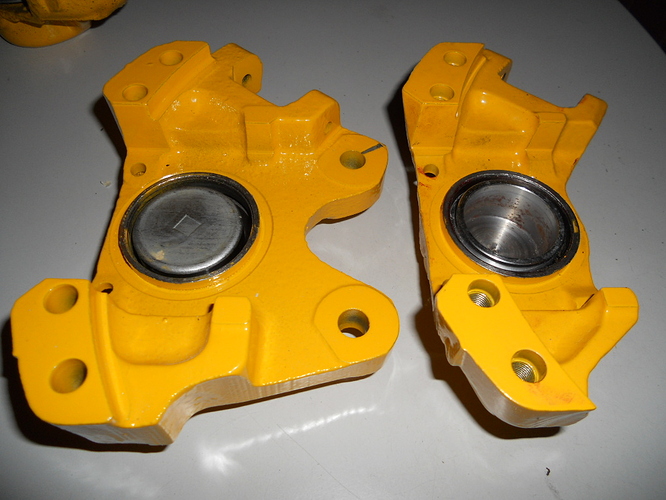 Don’t forget, the S1 XJ12 has vented discs as standard. IIRC, the mounting holes on the calipers are different between S1 3 pot, and S2 4 pot, so you would need to use S2 uprights. As mentioned, no-one ever complained about the braking performance of an S1XJ12, including road tests in which they caned the cars. I very much doubt you would notice any improvement on a road car by updating the brakes.
BTW, wouldn’t more piston area result in less force\area (ie fewer psi) all else being equal? A master cylinder producing ( say) 10psi on a 1 sq in slave cylinder would produce 1 psi on a 10 sq in cylinder, and less travel, as the displaced fluid would occupy a larger cavity. Or am I wrong?

You’ve got it backwards. Think of a hydraulic press or floor jack. IMHO.

So the 10psi ( for example) would still be 10 psi across the larger area, so 100 pounds pressure in total? But 1 inch travel at the master cylinder would only be 1\10" at the slave?