What are the chances of replacing a rusty core plug on a Daimler v8 - it’s the one on top of the right hand bank at the back. Can it be done without removing the engine? Not a lot of room between it and the firewall. I am not readhy to remove heads yet I just want it running so I can move it around…

As a temp job , I would clean it up a little then stick some of this in the plug !
No point in struggling if the heads are coming off at a later date . 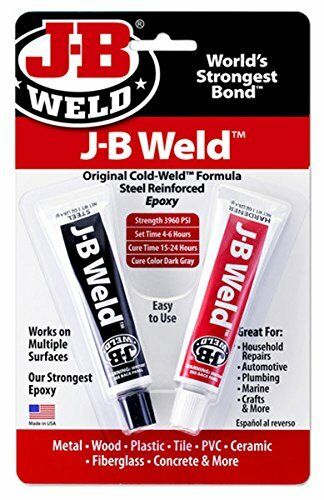 Sometimes a rubber plug with tightening capability can fit. See Dorman’s line of plugs, for example at https://www.dormanproducts.com/c-354-expansion-plugs-quick-seal-rubber.aspx

If you just want to move it, I would go the JB weld or quicksteel route…it usually works, and is easier than trying to get the plug out from a tight location.

If it was to be driven on the road regularly, I would probably try the rubber plug method

I used this to glue rolled ends to stainless curly exhaust extensions on my XJ6. Weather, exhaust and heat no problem after three years. Would try it for just about anything. Paul

Thanks guys I will get some. Never thought of it to be honest but hope it will work.

Just confirm, I used JB Weld on a leaky plug in 2002 - lasted until the engine rebuild in 2015 – 40,000 miles later - then one of the new plugs leaked! Sorted now, but I also have a pack of the US made expanding plug (copper ‘drum’, push in, turn a nut to expand) for emergencies. If I can find the pack I’ll let you know the make model number etc. but a good clean up and smear (I filled over the aperture entirely) of JB Weld will put you on.

P.S. Mine is a Mk2 / XK engine so size might be different. For future reference for XK engines, the copper expanding plug is Dorman 568-011 1-3/4in. Not readily available in the UK but a mate in the colonies sent me a pack.

Chemical metal putty installed today - it was not raining (Irish joke) and system re filled with water. No leaks but I will not start her up until tomorrow. Can’t wait…

Works! Not easy to apply the putty and very little to adhere to as it is a smooth surface under the oil feed pipe with a small rusty hole. Started up and got very hot with no loss of water. Should be easy to clean off with engine removed so worth keeping a tube of this in case a core plug goes as it will certainly get you home.