Crack in Piston on Rebuilt Engine -How Could this happen?

Do folks here routinely take full swings with a 16# sledge to “tap” the pistons into the bores? Because it would take one HELLUVA whack to crack a piston like that! I’d be willing to bet you couldn’t do it if you tried. The aluminum at that point on the piston is probably at least 3/8" thick. And the ring would be reduced to broken shards which, even when just cranking, would’ve done damage to the cylinder wall. And the “crack” appears to me to be WELL inside the ID of the ring groove.

No way is that a crack.

Back in the '70s, I bought a Mk 1 Zephyr with seized motor, thought it might free up if I towed it up to about 60mph and let out the clutch in top gear; no dice, car slewed all over the road, so engine out. Transpired that a bigend cap had come off and the crank came round and wrapped the con rod around the camshaft. It had splayed the rod, so it couldn’t come out through the top, but I couldn’t get the crank out because the flywheel bolt heads had been rounded off. I tried getting that piston out by drilling all around the crown and smashing it with a club hammer, then a sledge hammer and cold chisel. Not a show, so I doubt you could crack a piston just by hamfisted assembly. Whether the damage could occur with heat expansion is another matter.

The world needs to know ! Crack or no crack Grahame ?

Many, many thanks to all for the rapid responses and helpful suggestions .
Here is my answer:-
I looked again at the No6 piston and took some more side view photos with the endoscope. 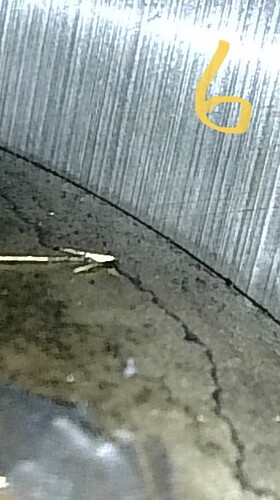 I then took a piece of MIG wire, flattened the end and sharpened it to make a scraper.
Carefully moved this across the crack but could not feel any crack line.
-Sorry the movie I made is too large to load.

Then an artists brush with liberal amounts of acetone as an initial clean. 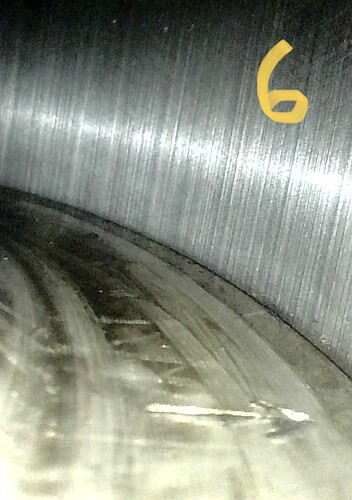 Very promising so more cleaning with regular rinsing of the brush. 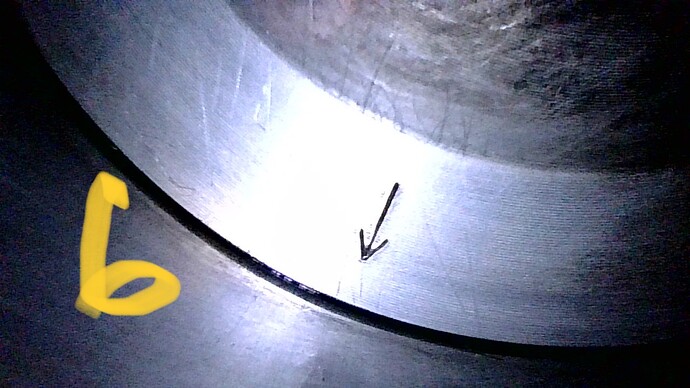 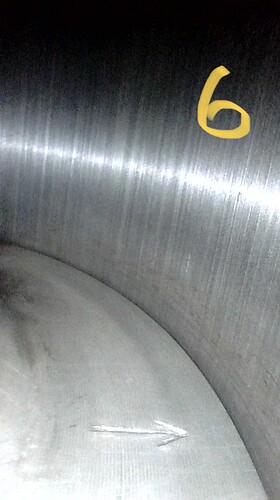 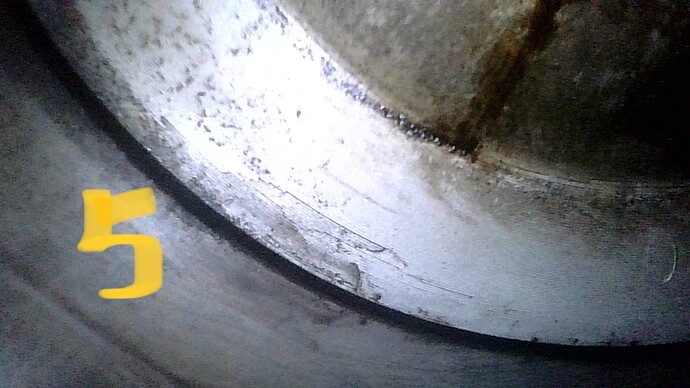 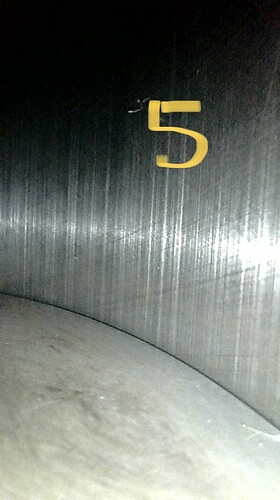 Unless someone thinks otherwise I see no need to remove the head for further checking.

So relieved that this has turned out to be a case of great endoscope technology leading to some unnecessary concern. Without the camera I would never have know what the top of the pistons looked like!!!
But as the initial intent was to check the condition of the cylinders after 4 years “in storage” is there anything I should do to preserve the engine for another 2 years?
I intend to turn it over by hand every few months.
The sump is filled with clean oil to just above the full mark - should it be filled to the top of the dip stick hole to keep the rear seal wetted?
Should I spray anything in the cylinders?

Should I spray anything in the cylinders?

Every time you turn it over, spritz WD40 in the bores.

Doing that you’ll be fine, and glad to see the pistons are undamaged.

I knew it! Good pictures, thanks for posting. A bit of oil in the cylinders won’t hurt, before turning.

Use aluminum duct tape over the intake and exhaust ports keeps humidity out
My engine sat for 25 years this way.

I then took a piece of MIG wire, flattened the end and sharpened it to make a scraper.
Carefully moved this across the crack but could not feel any crack line.

Nice. And, with that resolved…maybe the deposits were engine assembly lube, yet to burn off. SD

No way is that a crack

We are hard-wired for pattern recognition, which is fine and sometimes life-saving. So I could understand why the OP might get a shock at first sight.

However, we are also supposed to weigh other things in the balance when coming up with solutions to puzzles, and there was not a scintilla of evidence or circumstance to support the possibility that this was a ‘crack’.

Given that fact, the consternation was worth maybe 30 seconds of brain time to eliminate any realistic cause/effect scenario before moving on with the car resto, IMO.

By opening it up to group-think, quite a few people with the right idea from the start, began considering weird and wonderful options, where alloy parts get smashed without marking, or engines are run-in sans problems despite carrying mortal wounds. Those sane sceptics presumably ‘play nice’ in order not to be taken for a grumpy, opinionated old bastard. Thankfully, I have no such inhibitions…

Monday morning quarterbacking aside, how frightfully dull this thread would have been if the second post had been “No way is that a crack” and we all left it at that. This was a learning experience for all involved - well, mostly all. Sometimes, make that oftentimes, the greater value of the problem solving exercise (even when the problem is imagined) is the brainstorming that precedes the solution (even if the brainstorming is off the wall).

Hey, my first response was on how to make sure it wasn’t a crack in #6 and my second was about the pattern and why it can’t be a crack, wasn’t that realistic enough?

Indeed it was! Optical illusions are just that - illusions that fool the eye.

…how frightfully dull this thread would have been if the second post had been “No way is that a crack” and we all left it at that.

You really think that would have happened??

I watched as long as I could, hoping to see the wild, implausible theories get knocked down, but they only seemed to be getting more traction.

This was a learning experience for all involved -

I learned that acetone will repair piston cracks.

Seriously, ignoring all the banter about who was right and who was wrong, I’m glad the OP was able to resolve the question without pulling the head? All is well that ends well.

If there was a shortage of topics, Nick, such that we had to husband them carefully and not squander the learning opportunities they represent, I could agree more with an ‘art for art’s sake’ meandering approach. I’ve just walked the dog and purposely took the five mile trail because it’s a pleasant activity in and of itself. Shooting the breeze is the point of most forums, as you infer.

On the other hand, if the dog had a sore foot that was in imminent danger of deteriorating and needing an expensive fix, I would be remiss if I deliberately avoided the two mile quickie route merely because I put my love of the woods above her need for a vet.

When shooting the breeze about piston stains starts to coalesce into a loose consensus that removing the head would be sensible (AKA needlessly spending other people’s time/money) I think it’s reasonable to express one’s view counter view more forcibly and support the Occam’s razor contributors. The truth had already been demonstrated by the time I posted, so my point was about the process more than the people…

It probably struck me as more noteworthy because I read the thread in one go, after a J-L sabbatical, whereas most (all?) others followed it in real time, when its sometimes convoluted logic was probably less apparent. Besides, it’s Tuesday not Monday

I had nobody specific in mind when posting, other than agreeing with Raymondo’s pithy comment. I certainly didn’t think my minor beef was worth dredging through 60-70 posts to ensure accurate who-said-what attribution

I’d be willing to bet you couldn’t do it if you tried.

I wasn’t really going to bring it up, because after all these years – decades! --, it still is an embarrassing thing, but it can happen, because it happened to me.

It happened to me on a very expensive Cosworth piston, while trying to put it into the bore. Its top ring was 1 mm steel, and as a result, very difficult to keep in a standard piston compression band.

So, yes, it can happen, and it was a logical thing for the OP to investigate whether it was that or not. Kudos to him for having persevered and finding out it wasn’t.

I’d be willing to bet there are other people on this list that were they honest, might report the same thing.

Just as I got it down to that point I gave it a thump with my dead blow hammer handle – not a mighty whack – and sure as shit broke the crown off.

Wow.
I‘ve hammered out a few stuck pistons, and chiseled one out, and even with the two pound hammer could not produce any cracks or significant damage so far. The Jag pistons are pretty solid.

It’s easy to overthink and comment and it’s hard to tell someone that everything is fine when it could be a problem. You don’t want to discurage someone from lots of work just to find out doing something would have been right after all, when the engine disassembles itself. Simple things first should always be the first response.

I have a question. Why are the vertical scratches on the cylinder wall so pronounced? Is that from the camera and I never noticed it? (Nothing to worry about! The engine is fine!)

there was not a scintilla of evidence or circumstance to support the possibility that this was a ‘crack’.

Peter, with respect, I have inspected many mechanical devices and welded structures for cracks and it is perhaps my awareness of such that brought my attention to the “crack”. The nature of the “crack” is not dissimilar to others encountered over time.
In referring it to the forum I was seeking to find if there was “a scintilla of evidence or circumstance to support the possibility”
The speculation from those more knowledgeable than I is an important input into having comfort that, whatever the outcome, all possibilities have been considered.
And- in answer to the query from David on the vertical scratches, I believe they appear more pronounced because the light from the scope is shining at an oblique angle.
I did also look twice and thought that is a lot of scoring for a few minutes running but when I look at a photo more square to the cylinder wall you can see the honing lines and the vertical scratches. I am not worried about them. 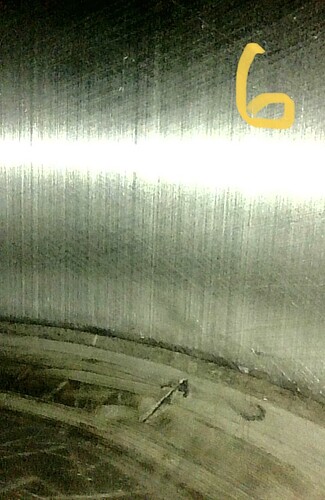 Thanks yet again for the inputs and advice.

I didn’t ask about the vertical scratches, and I, too, I’m not worried about them. I think it’s more an artifact of the way that the boroscope works.

Sorry Wiggles I just corrected my earlier post.
The scope is high resolution and being about 2cm away from the wall of the cylinder I guess it will make the scratches appear more pronounced.