SUMMARY OF PREVIOUS THREADS I thru IV
Part I - Introduction of Hobby Shop and removal of engine/transmission
Part II - Removal of all wiring harnesses, dropping fuel tank, stripping the car of all ancillaries and cleaning asphalt coating from under-body/bonnet
Part III - Engine Tear Down, Removal of Heads, Chrome to Chrome shop, Prep for and actual Painting of the Jaguar
Part IV - this thread covered quite a myriad of topics:

At the close of Part IV, I mentioned that two phone calls derailed my plans for wrenching in my Hobby Shop. I was excited about both cuz they were local and I received immediate gratification.

I totally forgot about a third call - this from Joe Curto. He finished the rebuild/restoration of my four carburetors. He needed to replace at least 1 float, at least 1 vacuum adjuster screw, several lock screws. I am sure there were more issues but these were the highlights. The carbs sat for 32 years unused in the AZ desert and the CO high desert plain.

He had called during the previous week and referred me to Rob Medynski (sp?) (*) whose expertise is rebuilding dizzies and converting them to vacuum advance.

ASIDE: I have called and emailed 123Ingnition in Germany several times and got no response. Their system uses modern electronics, two coils, 2 sets of 6-cylinder spark plug leads (one for each bank) cuz the distributor cap has the internal terminals on two levels. It can use various (16 presets) advance timings using either a USB cable or blue tooth connection (different models). All the bits came to about $2,100.

Rob charges a very reasonable price for a total rebuild of the dizzy and the advance unit mod: $250. He works with Joe a lot. In fact, once I decided to use Rob, Joe sent the my right front carb directly to him to be machined for the proper port for the vacuum hook up.

So, three of my carbs have already been shipped to me from Joe while Rob has my dizzy and the fourth carb. Rob said he usually completes his mods in 3 to 10 days of receipt; so, soon.

BOTTOMLINE: I am going with the stock dizzy (modified for vacuum advance) over a more modern option. If it doesn’t deliver the improvement of performance I am expecting, I can always circle around and “upgrade” later.

I don’t think you’ll be disappointed with the performance of the stock, rebuilt distributor: for a street engine, it works perfectly well. Updated with modern internals and all that, you’ll be fine!

I also added vacuum advance by British Vacuum … and kept the original distributor but I went the way of a MSD 6A (62013) box triggered with FAST 715-0020 optical trigger. Works great !

All y’all have talked up, commented on, and sang the praises of Joe Curto - THE Carburetor King.

Today I got to witness first hand the efforts of his work.

Firstly - each carb was packaged in its own box, enclosed in a vacuum-sealed bag, and nestled in scrunched up newspaper. Very secure.

I unboxed each of the three carbs (Joe sent my Right Front carb to the guy doing the rebuild/upgrade of my dizzy to machine a port of the vacuum advance). Oddly - there was a fourth box smaller than the others. Hmmm – left over parts? (not likely) Return of replaced components (unnecessary).
A Joe Curto Coffee Mug. Nice touch 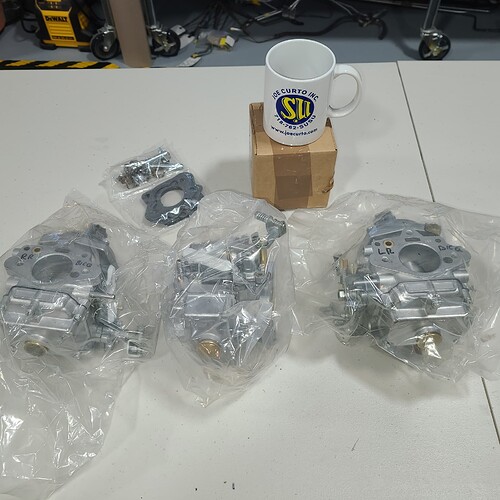 Each carb was labeled as to its position on the engine and the needle size – all three have B1CQ.
I only unbagged the one. 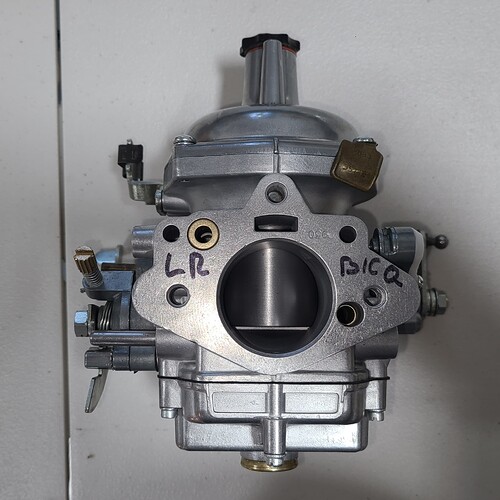 I’m not an expert but it looks and feels like Joe vapor blasted the carbs.
He apparently plated or cad plated the bell cranks and other small bits 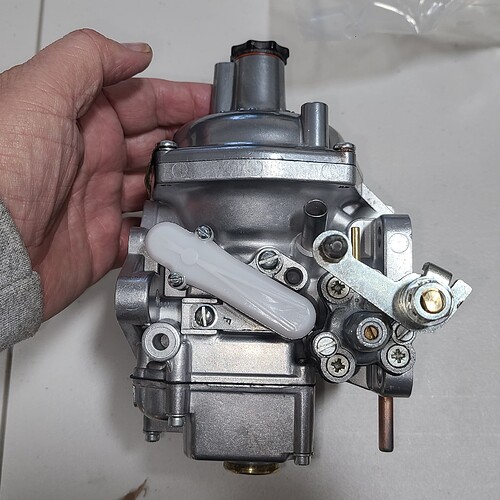 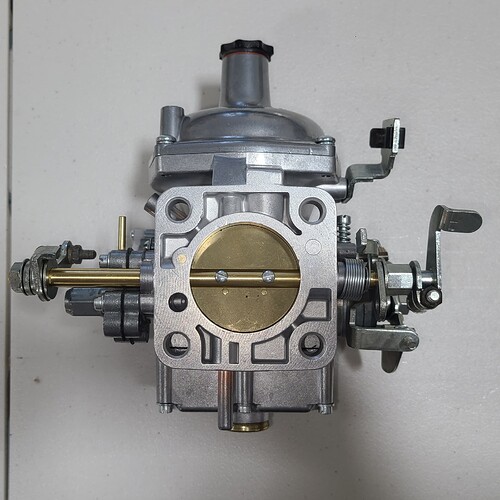 If they work half as well as they look, I’ll be a happy camper.

Coincidentally, I paid the invoice for the dizzy rebuild/upgrade today. Ought to see those later this week.
And the Damper Doctor sent my harmonic balancer back late last week.
New parts are stacking up - - - - I need a bigger hobby shop.

You need the Paul Wigton Addition…

Got my dizzies back after being rebuilt and converted to vacuum advance. I sent my original and a spare picked up years ago. 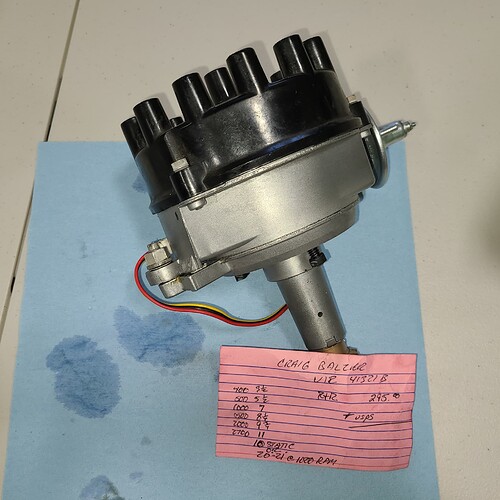 Each dizzy had a 3x5 card showing the advance:

I was surprised at the difference between my dizzy curves and those mentioned in another thread covering 4.2 curve options for the 123ignition dizzy.

I did turn a “corner” in that I put the first thing back on my Jag today.

Yesterday, I turned another corner yesterday in that I did NOT include the wiper mechanism in the box for cadmium plating, nor did I try to powder coat it. AlI I did was wire wheel the mechanism to clean off the decades of crud.

One tip for (Series III owners only?? ) those removing/re-installing the wiper mechanism is NOT to try to wrestle them out either the left or right opening in the dash (the curve of the dash at the ends gets in the way). Purely by accident, I found out today that I could quite easily slip the ~3’ long mechanism into/under the dash through the center opening without risking the paint or bending the mechanism. 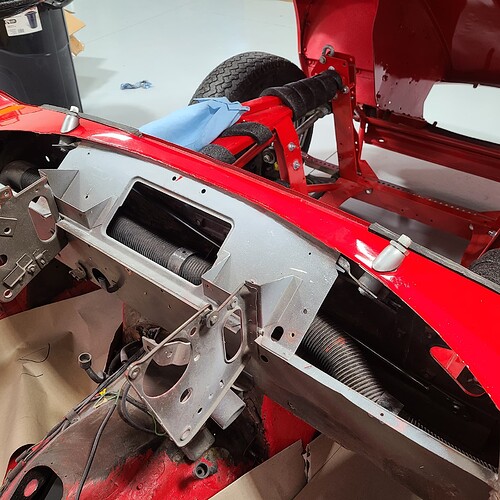 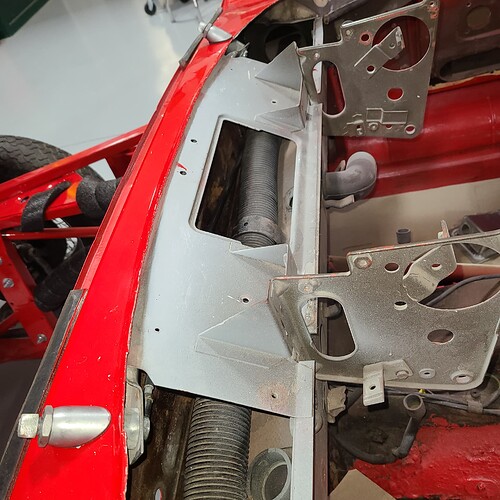 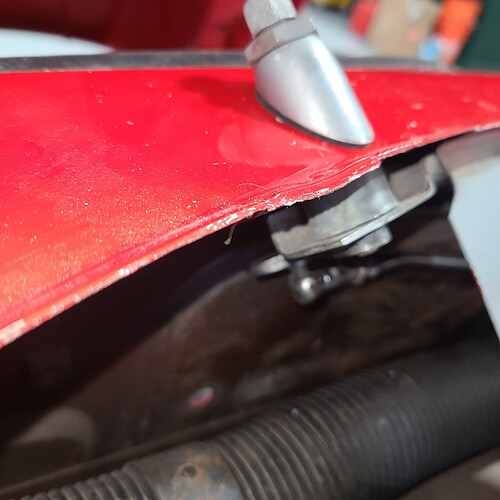 PS – Those small white dots are NOT areas with no/missing paint; those are remnants of the polish or final buffing compound the painter used, they are in tiny depressions in the lip of the body

Which brings up my question: I have been going over the A/C condenser checking wiring, switches and locating replacement evaporator valves, etc. So – is there a way to bench test the A/C or do I gotta install the whole kit in the car and then hope it works/can be made to work without tearing everything out again?

Pretty much have to install it: one could make a test rig, but that would be one helluva lotta work.

Youse got nuffin else to do…

Hello Craig,
I’m interested in the compressor you are installing. Can you provide some details please. I’ve attached some photos of mine. It was in the car when I imported it in 2018. Not sure if it’s original…It sure is heavy. 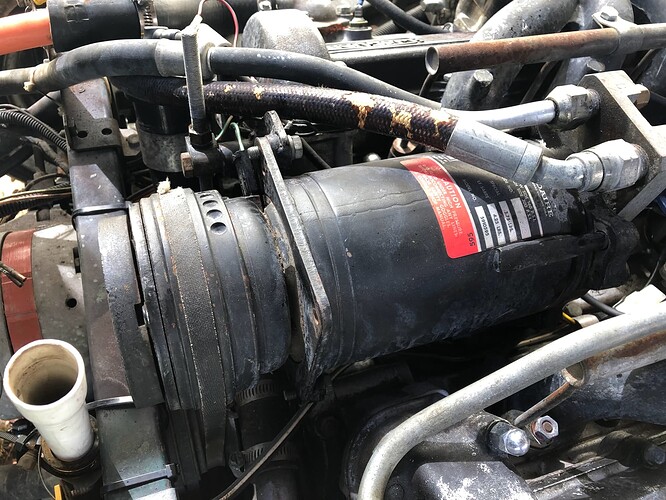 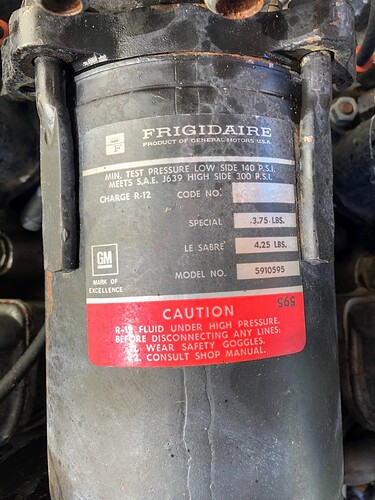 I am certainly no expert on A/C components, but that Frigidaire (I believe Model A6) sure looks like mine. A minor variance is that my label (long gone but available for a few bucks from the usual’s) was green across the bottom. I don’t know the difference denoted by the two colors.

That Frigidaire compressor was included in 1000’s of GM vehicles in the 60s, 70s, etc. I would guess that GM of Australia also used them – if you need to replace it.

I understand that some folks have replaced it with a modern aluminum compressor that works better and weighs much less. I will reuse my Frigidaire cuz (A) it is original and (B) I have already purchased a set of new replacement A/C hoses and with a smaller compressor they would likely end up being too short

There are several threads covering the compressor if you need more details.

I’ve a spare if you need it.

Thanks Craig, I plan to go the modern replacement route when the time comes…

nestled in scrunched up newspaper.

Hope it wasn’t The NY Times! You can’t trust what’s in that!

Take a look at the Sanden rotary compressor. A friend installed one on a friends Series II E Type and it has worked great for him in Arizona for the last 10 years. He didn’t remember the weight but held it with one hand while installing.

Sanden seem to be a good choice. Interesting about your friend, my car came out of Tempe, AZ.
Thanks for your help.

I gotta keep telling myself that. Some days i just don’t see any progress.