Does anyone happen to know if the audible resonance of a crankshaft struck like a tuning fork corresponds with the torsional vibration resonance frequency?

I suspended the shaft and recorded the resonant peaks with an audio spectrum analyser phone app when struck with a small hammer. 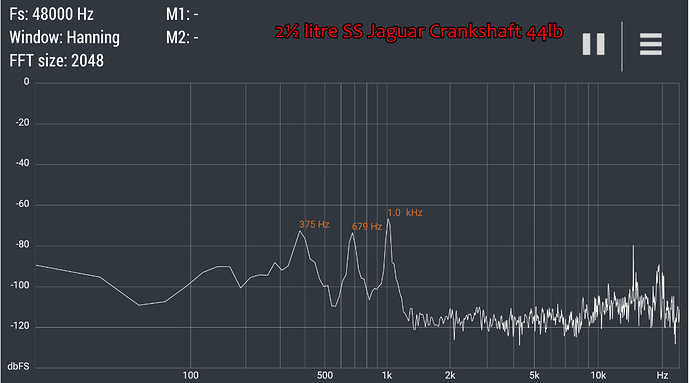 Fantastic question and data. Without committing to a clear answer now, may I engage you a bit of further discussion? I am an experimental physicist, just retired from 40 years as physics Professor at University of California, Irvine.

There are a couple of initial questions. 1.) How was the crankshaft suspended (attachment points and means). 2.) How was it struck: location, striking tool, and means of striking.

There are longitudinal, transverse, and torsional normal modes which may be of interest.

The mobile phone microphone will have a frequency dependence on its detection capability. Typically most humans do not hear much above about 12,000 Hz so phone microphones don;t need to be sensitive above that. A human scream, indicating danger, will have lots of components in the 2,500 to 4,000 Hz range, below that range does not cause human danger responses as much. Below about 100 Hz are difficulty to measure with small microphones, typically below about 200 Hz will be under-measured by small microphones unless compensation in analysis is used. For example, people don’t hear 50 Hz signals well in the ears but can feel them in the center of the body as a thumping.

I have a loose Mark V 3 1/2 crankshaft and can make comparison measurements.

I will check in some engine design books to see about crankshaft fundamental and harmonic frequencies. I suspect this question is well understood within the community that designs crankshafts.

Thanks for posting this topic!

Thanks for posting this topic!

Indeed: this will be a fascinating thread.

Hi folks, thanks for taking an interest.

I suspended the shaft nose upwards by tying a thin wire loop around the uppermost crank arm. As it happens I suspended it from a spring balance that measured the weight as 44lbs. I suspect your shaft Roger will be a little heavier than mine due to the larger crank throws of the 3½ litre and it will be interesting to see how this alters the resonance frequencies.

The Android app that I am using is available free from Play Store and is called Advanced Spectrum Analyzer PRO and was written by Wojciech Czaplejewicz.

I struck the shaft quite gently on one of the balance weights but audibly I don’t think it really changed much how or where I hit it. My hammer or perhaps more accurately “tapper” was the steel head of a small instrument vice with a shaft about 4" long and a head perhaps 1" square x 1/2" thick.

In fact the initial spectrum on hitting it was much more complex with multiple components stretching from about 300Hz up 10kHz but after a few seconds of letting it “ring” it calmed down to show the dominant components that you see in the plot above.

As to the phone app, I had recently installed it to test an ultrasonic bird scarer to deter seagulls from nesting on my roof. This device is triggered by a PIR and emits a tone anywhere in the range 10kHz to 20kHz and is adjustable to any point in that range. I don’t know how level the volume of the scarer is but the app was quite responsive over the range with a maximum amplitude around 16kHz with a possible variation of 5 to 10dBs .

I think the phone app in my phone is reasonably level over the normal audible range. Certainly level enough to let us see resonance peaks.

Most of the web sources covering shaft vibration concentrate on torsion.
This one does indicate resonance frequencies at multiple modes.

Would it be useful to suspend your ‘tapper,’ from a string (or a suspended lever), and release it from a given and fixed distance from the crank?

That way, any given energy exerted in the strike is repeatable and equal.

As long as the striker bounced and has a mass perhaps 100 grams or less, I initially would expect the contact time for single tap to be about half a millisecond or less. This would give a broad spectrum frequency excitation of at least several kilohertz bandwidth. Then with a little ringdown time things often settle into some dominant normal mode structure like what Peter shows. Then the overall radiated sound from the vibration damps away over longer times. Peter’s measurement technique observes the radiated sound rather than a direct mechanical motion measurement attached to the crankshaft.

While the relative strengths of the different frequency components will not be well determined, the spectral points of some dominant modes can be told by Peter’s method. There may be spectral differences observed by striking radially inward, also in the direction of crankshaft rotation, and at end along the crankshaft. There may be some difference also depending on which weights are struck as they are at different points along the crankshaft.

I will be happy to hang my loose crankshaft and strike for comparison. There will, however, be a slight delay as the surgery of a couple days ago prohibits my lifting more than 2 kilograms right now, rising to 5 kilograms after another 10 days.

You had me at fundamental mode!

A very interesting science and mechanical engineering question!
I would have done it horizontally, supported at the end main bearing journals 1 & 7.
Then supported it at 1, 4 and 7.
Then at all 7.
There ought to be quite a difference in frequency response.
You might begin to see why a 7 main crank is better than a 3 bearing or 2 bearing design.

If they have the equipment to measure torsional resonance I think that would be very useful.

I would have done it horizontally,

I’m afraid my garage is a mess at the moment due to storing a load of floor boards for work in our house so suspending the shaft horizontally would be rather challenging for me.

Torsional resonance is what kills long crankshafts. The fundamental frequency will be a function of the unbraced length. Adding 7 main bearings likely makes the free air resonance moot. The main bearings have very little effect on the torsional resonance. A long crankshaft is not too different from a torsion bar or clock spring. Every time a cylinder fires it imparts a torsional impulse. That impulse exerts a torsional twist that will be proportional to distance from the damped, or load, end. If you took a very high speed video of the free end of crankshaft then replayed it in slow motion, you would see the front damper lurching with each impulse, each lurch different depending on the cylinder that fired and its distance from the flywheel. Steel cranks have good elasticity and hence fatigue strength. Cast iron cranks are more brittle and do not tolerate a lot of torsional stress.

Cast iron cranks are more brittle and do not tolerate a lot of torsional stress.

A fact which always made me worry about Formula Ford cranks, which were cast.

Returning to my original problem I was just hoping to discover if there is simple relationship between crankshaft torsional resonance and audible (flexure??) resonance.

I suppose we could possibly discover the torsional resonances by videoing a marker placed on the crankshaft pulley. The video would suffer from aliasing because it would only be sampling at 25 or 30 Hz but this wouldn’t matter if we sampled for long enough to see the full range of movement. The measurement would require that we run the engine over a range of speeds and that we correlate the measured speed to the video. All a bit of a faff but it could give us a plot of the torsional resonance frequencies if the engine speed was sufficiently stable at each measurement point.

We should be able to locate the resonance frequencies by watching the electronic viewfinder image of the video camera that is effectively our stroboscope. Or better still, a video monitor located such that we can adjust the hand throttle whilst watching the video.

Looking at this paper it looks as if resonances do correspond at certain modes. (T = Torsional, L = Lateral) 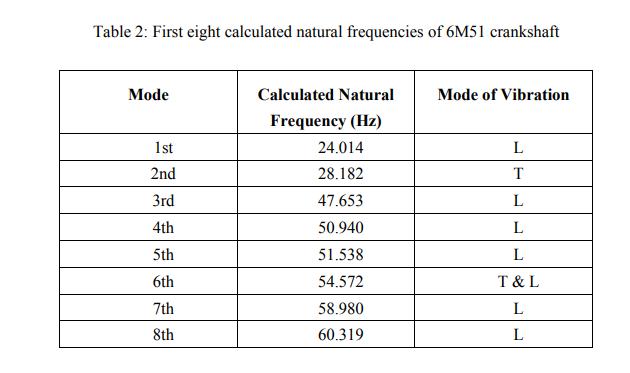 and another example showing relationships between lateral and torsional for certain modes. 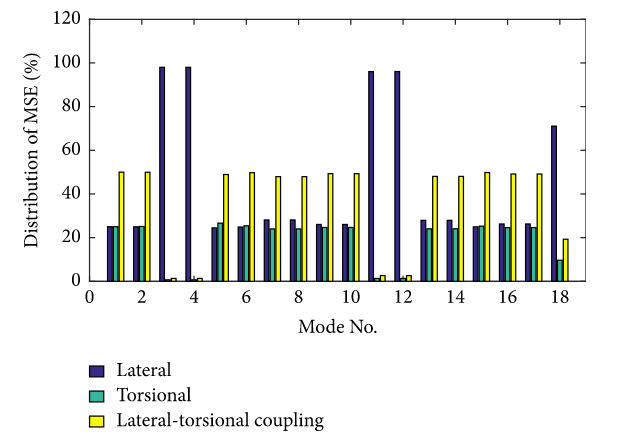 you would see the front damper lurching with each impulse

Mike may not be aware that the 3-1/2 Liter pushrod engine has a damper, where the 2-1/2 Liter does not. A study like this might show why the 3-1/2 needed a damper. I wonder what sort of engineering they had at Standards to determine this back in 1937 when they were working on the development of the 3-1/2.

A pile of warranty repair invoices for engines with broken crankshafts would be my guess.

I’m largely (OK, completely) ignorant of the pushrod engines. Is there a big difference in the stroke between the two? A longer stroke imparts a bigger torsional moment.

Formula Ford cranks, which were cast.

But very short. About half the length of a Jag 6, maybe?

Is there a big difference in the stroke between the two

Indeed, but on rental Fords, there was a hard limit, of 6500rpm.

I did some more tests this morning and you do get different results depending on where you hit the crank but only in the relative amplitudes of the components. It is however very important that nothing else is touching the shaft. Even having the four flywheel bolts loosely fitted completely damped the ringing as does anything touching it. For these tests I used the softish plastic handle of a garden trowel for striking the shaft.

I found that best results were obtained with the suspending wire arranged to run across the centre line of the shaft. 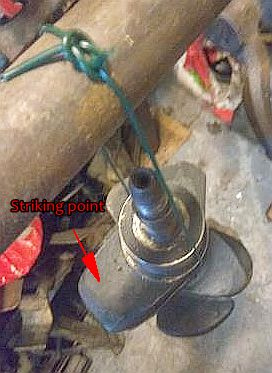 The plot below was with a different 2½ litre shaft struck on the top crank arm and shows more components but those of the previous shaft are still present. 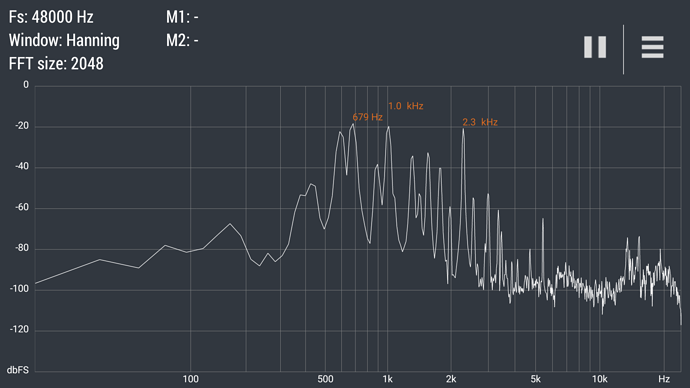 Below is the previous shaft suspended as in the above photo and hit at the top crank arm. 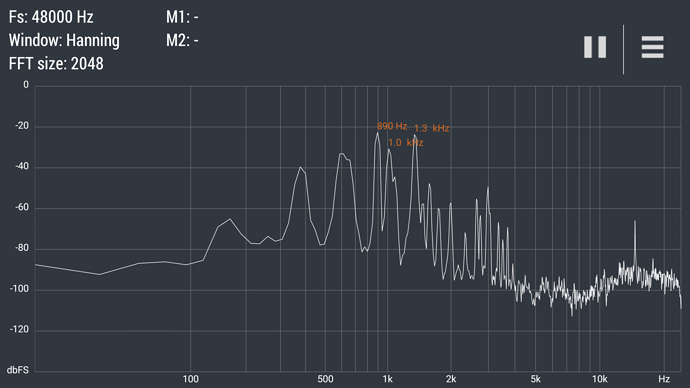 Tapping on the threaded part at the top of the shaft accentuates the lower resonance. (The plot below is with the second shaft not the original.) 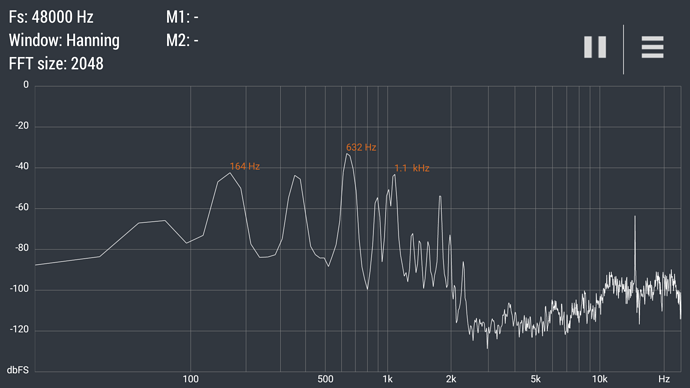