Cruise control-shield up or down?

Not sure if this belongs in V-12 or XJ but its been too long since I took it out and am unsure if the bellows shield goes up or down.
I’ve seen pictures with the shield up or not visible.
Also, I believe it gets bolted to the back of the plate that holds the AC fittings on to the back of the compressor?
Thanks guys
Dave

Dave,
The bracket for the Speed Control Actuator goes beneath the rubber bellows not on top of it. The correct installation is shown in the attached overhead shot of my Canadian market Series III 1990 V12 Vanden Plas. 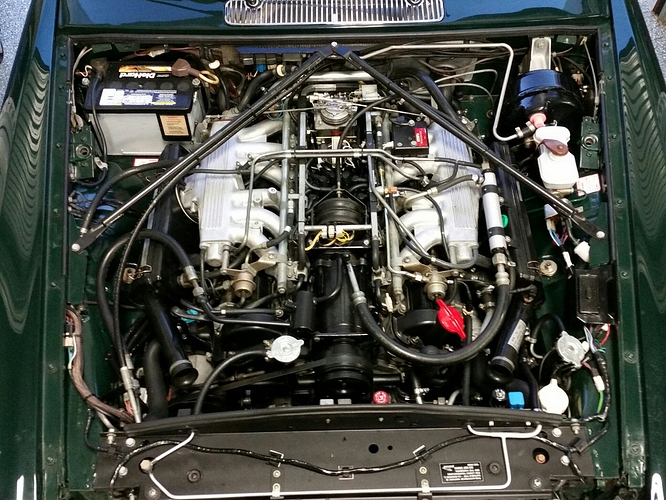 Thanks Paul, its a tight squeeze to get it in there!
And am I right that it bolts to the back of the compressor?

Dave,
Yes, the Speed Control Actuator bolts to an L shaped bracket connected to the rear of the A/C compressor as shown in the picture that I just took of my 1990 V12 Vanden Plas. 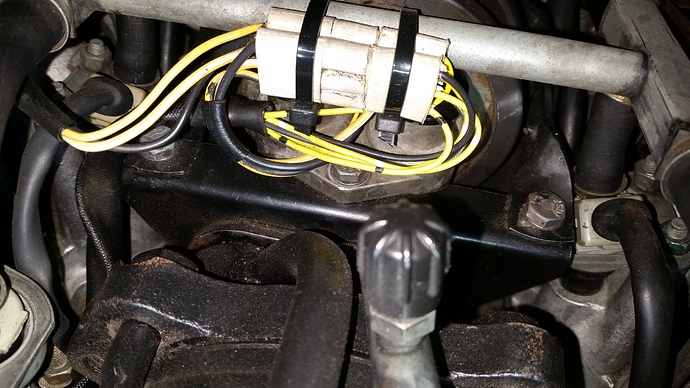 Yes, the shield goes under the bellows, as its purpose is to protect the rubber bellows from the heat of the engine. It mounts to the bracket attached to the back of the A/C compressor with the same bolt that holds the bar that keeps the hose connections in place.

Now, while we’re at it: That bar that holds the hose connections is not thick enough and commonly gets bent. This is possibly because the hoses get leaned on while fiddling with the engine, and the stress causes those fittings to start leaking, and then somebody cranks down hard on that bolt to try to stem the leak.

If you’re not working on the A/C at this time, just tighten things up and carry on. The next time the freon circuit is discharged, though, I recommend:

Thanks Kirby and Paul, The system is totally off the car so I can make the change to the plate.
Actually, I put the compressor back on the engine last week. I got the upgraded head from the UK, and have the pressure sensor. Now just need to re-wire it and no more melting fuse.
By the way I got a seal kit for the compressor and have used the black rubber O-rings in the kit for the back of the compressor where the hose fittings connect under the plate you discuss Kirby. Before I get closer to buttoning it all up is there anything I should note re: those O-rings?
Thanks again
Dave