My Wife’s treasured 120 FHC has a leaking head gasket I am in the process of replacing. The head is stuck on the studs (of course!). Engine is still in the car. I think most of them are free - they have a wonderful ‘ring’ when tapped but several seem stuck. I am soaking and tapping with the hope of freeing them and getting the head off.

Do any of you have any tricks/advice on removing a stuck head?

Apply upward force to the head with a picker as if pulling the engine, and then leave it hanging. It won’t take much, but it will take time. A sling attached to the intake and exhaust studs will do.

Once it’s hung, apply heat to the head studs, let them cool, repeat…

I removed the head on my XK150 but I had the engine on a stand, I used a bottle jack between the oil filter housing and the intake manifold, once I moved it a little I put a thin wooden wedge in the gap and moved to the other side using the engine mount brackets to jack against. Alternating sides and building up the wood wedges got it loose for me to thread a strap between block and head so I could pull it up, helps to have a helper wiggling and tapping with a rubber faced hammer. Not sure how much room you have with engine in place though, hope this helps.

Apply upward force to the head with a picker as if pulling the engine, and then leave it hanging. It won’t take much, but it will take time. A sling attached to the intake and exhaust studs will do.

Upon that eventuality, try double-nutting the stud, and see if it will turn out, which works best if the adjacent head nuts are on.

Worse come to worst, Ive had to weld on a standard nut, and sl o o o owly twist it out.

Make sure you get the six smaller ones around the front and timing chain gallery taken off before prying much on the head.

I second the judicious use of a bottle jack and block of wood. You will also find a couple of hardwood wedges or shims to be helpful. I have not tried them for this purpose, but I saw some hard plastic shims at Lowes or Home Depot. Shims like would be used to plumb a door jam.

I second the judicious use of a bottle jack and block of wood. Y

Be careful to not place the bottle jack foot under an intake of exhaust port: I forgot alll about that, and caved in the bottom of an intake port.

This isn’t one of those 4.2 blocks with the problem studs? They talk about those a lot on the XK-engine forum.

Keep oiling the studs with Kroil or Liquid Wrench or whatever is your favorite penetrant.
The engine hoist is best if you can get slings around a couple of intake and a couple of exhaust studs, the idea being even loading. Give it some up force and let it hang awhile. Tap on the top end of each stud with a large flat end punch and 2 lb. ball peen hammer, the idea being to give the rust some resonant shock.
The idea of the wood block above the bottle jack is to distribute the load over a larger area, as opposed to just the top flange of the jack.
Don’t go crazy with the jack, because it only loads one side, just give it some force and let it sit awhile.
You could try the hoist and jack together, alternating jack, no jack, jack, no jack, etc.

I had a stuck head on a 140 engine my brother found in a field. It had been sitting there so long the head valley was full of dirt from decaying leaves. It took me about a month of soaking with oil and up force with the hoist and tapping on the studs before it came loose.

Just took a few pumps and she broke free, then then do the other side 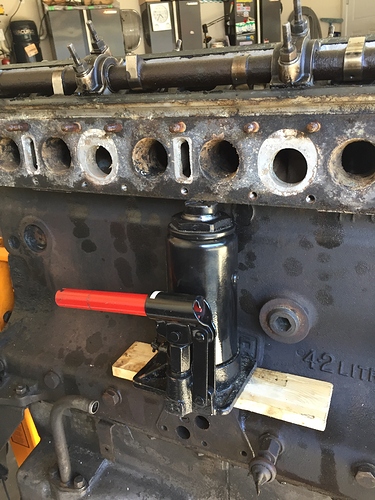 Jag heads can be a problem but nothing compared to an old flathead Ford with Denver(aluminum) heads. Way back when a friend of mine had a 38 or 39 with a external head gasket leak and of course the head wouldn’t come off. Nick removed all of the cylinder head nuts and DROVE the car that way for at least a week and it never moved a smidgen! By then the leak was really bad and being kids you can guess how both were removed. If you guessed broken up with a hammer and chisel your the winner! The most amazing thing about this whole “adventure” the that the block face was never injured in the removal process and with a couple of used heads from somewhere it started right up and as far as I know ran for years.

Congratulations! For future reference, I would put the block of wood between the jack and the cylinder head. It’s very unlikely you could damage the block, but there are greater opportunities for unintended consequences with the head.