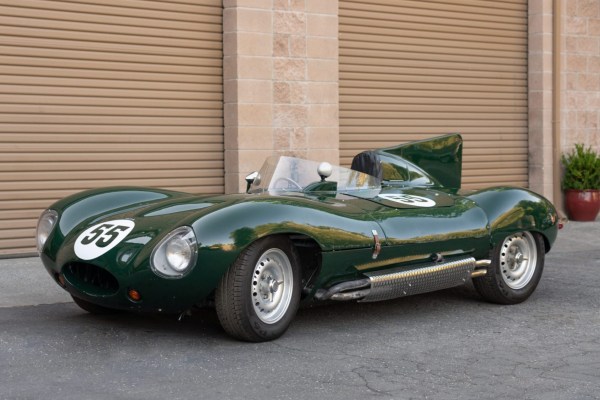 Bid for the chance to own a Short Nose Jaguar D-Type Replica at auction with Bring a Trailer, the home of the best vintage and classic cars online. Lot #58,965.

CA’s current registration procedures are far more stringent than they were back in the 60’s (assuming the car really was built/titled/registered then). Probably the most that was required was having the VIN numbers visually confirmed by a police officer, who then signed the title application. If the Police Officer accepted the info, and signed the form, it was unlikely that the DMV challenged it.

This was largely the case as recently as the late 90’s, when I registered my XK-150. The chassis, engine, and body numbers on the vehicle were matched to the VIN plate and the Heritage Trust Certificate, and the Title Application Form signed by a Police Officer. I recall the DMV verifying that the VIN number was appropriate for the make, model, and year of my car. It was really that simple.

I’ll let the D-Type experts weigh in on the VIN number itself, but it’s obviously stamped on a repro plate. But even with a valid D-Type VIN, I’m certain that the car wouldn’t pass CA’s process today. The DMV is far more critical and the procedure far more exacting. It’s a challenge to get a REAL car titled and registered today !!

Because it says so on the front of the bonnet.

Regardless, it appears to be a good deal for the buyer.

Thanks for that comment. I am the buyer. I’m just awaiting its shipment from CA to my home in Colorado.

Keenesburgian, here: would love to see your D, sometime.

I’ll be storing it in Colorado Springs for the winter but it will be up in Breckenridge during the summer. Are you nearby?

I replied in a pm. Look forward to talking with ya.

A question- was the D titled/registered in NJ in its early life?

Unfortunately I don’t know much about the history of the car. About the only thing I have is a California title from 2019. Nothing before that. I am supposed to be getting some maintenance records but I am still waiting.

Had a look at some of the photo’s and see that the event tags/plates on the dash are CA locations in the late 60’s and early 70’s. So that info negates where I thought it may have come from/who built it.