I have bought a 91Daimler Double Six and it seem the previous owner had ‘passion fingers’. Like a Pandora’s box the more I look the more I find. In this case under the rear of the right hand bank is a thermal switch which looks like is screwed into water jacket. 3 connectors, the top one goes to a vacuum pipe on top of the right side throttle butterfly, in the vacuum line on this one is an inline disc of some sort. The other 2 outlets of the thermal switch at the water jacket have a vacuum hose connecting one connector to the other (loopback). This was a Japanese delivered car that was imported to Australia. Any information greatly appreciated as to how it’s meant to be connected and to where 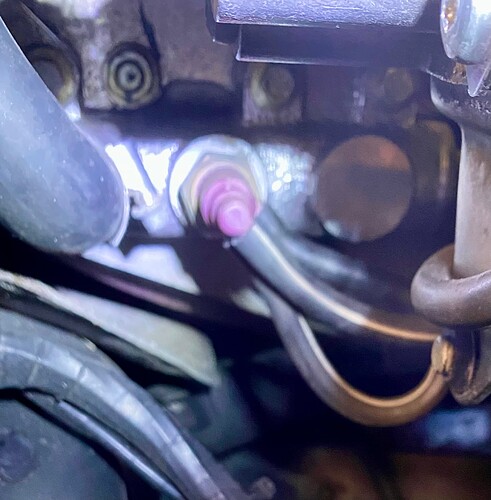 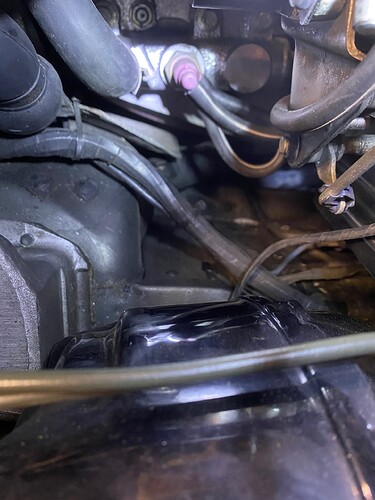 The hose routing is shown but whether or not an illustration from the parts catalog is correct, I can’t say. It probably is, but…?

I presume there’s no vacuum hose routing diagram in the engine bay? On the underside of the bonnet, perhaps?

That’s the one, thanks Doug miracle worker! The black hand who did this has removed the T piece, that’s fine now I know I can source.

To test spray some oil on the bushings whilst idling? Vacuum hoses now aligned to diagram, the clips on all the electrical connectors on the injectors are broken. Honestly some people.

The throttle bushings Kirbert is referring to are the ones you can see in the photo, they seam to have lots of play which is not ideal.
You could fab something yourself or get some upgraded ones from @John_John1.

Also download and read Kirbert’s Book, an extremely useful tool and will answer most of your questions.
https://www.jag-lovers.org/xj-s/book/Jaguar.html

The black hand who did this has removed the T piece, that’s fine now I know I can source.

**
Keep in mind that the drawing shows a ‘standard’ layout for the vacuum advance for ignition timing, Al - which varies with markets and model year. US, UK/Europe, Japan and Australia (and others) all differed at one stage - and being original Japan; an Australian PO may have modified to comply with local emission control regulations. Or for that matter; have made his own modification at will/random…

The V12 distributor vacuum input varies with idle, engine load and temperature. The latter either using coolant or oil temp to switch vacuum source between manifold and ‘ported’ vacuum - with various other components to further modify vacuum advance. It is very complicated as it is not readily clear which market set-up is being desired - and components differ without necessary being market interchangeable…

The main reason for the complications are different emission control targets, the UK/Europe had none - and the V12 HE required different set-ups both to comply with regulations and to give satisfactory engine performance/behavior at all times. At one stage you have to grapple with it…

Keep in mind that the drawing shows a ‘standard’ layout for the vacuum advance for ignition timing, Al - which varies with markets and model year. US, UK/Europe, Japan and Australia (and others) all differed at one stage - and being original Japan; an Australian PO may have modified to comply with local emission control regulations

Actually, Frank, the diagram specifically says “Australia-Japan” at the top. No guarantees, of course, but it might be correct. OTOH I don’t think Jaguar updated/edited the parts catalog to reflect every change in emissions/market spec over the course of years.

the clips on all the electrical connectors on the injectors are broken. Honestly some people.

Typical. The plastic electric connectors suffer from umpteen years of baking. Look at 'em the wrong way and they’ll break. Plan on replacing them. Over the years V12 engine heat takes a real toll on all rubber and plastic parts in the engine bay

The previous owner removed the CATS being against Australian Design Regulations amongst other removal of vacuum hoses. CATS refitted to comply and Roadworthy and sorting emissions back to spec. Not as simple as the Holden V8 I used to own, not at all.

I take that as an understatement, Doug - and the same goes for wiring and general vacuum lay-out descriptions…

To be charitable; I think Jaguar kept very close tabs on what went into each car - they just did not have the capacity, or inclination, to continuously update documentation meant for general use. And of course; during all these years, cars changed hands and markets - and POs had, and has, their own ideas. So a pinch of salt is advisable when face to face with the actual car. That said, Jaguars are amenable to mix and match…