Charles, based on your photo it looks like the same freeze plug that was leaking on my S2. I removed as much as could on the right side of the engine so I could see the freeze plug. Access is very difficult and limited. As you say if you tap it in too far it might fall down into the water chamber. I purchased a long 1/8" bit (at least 12" long) and drilled a hole at the edge of the plug. I borrowed a “snap on” slide hammer and screwed it into the plug. At first it didn’t budge and the screw just pulled out. I drilled several more holes and eventually the slide hammer screw stayed in the the plug pulled out. It took several hours and many times I thought it wouldn’t move but at last it did come out.

I cleaned up the hole and put JB weld on the new Dorman plug and gently tapped it home. I then added more JB weld around the edges. So far no leaks even after several thousand miles.

No, but as you saw, it can be grabbed and removed.

On the replacements, use old fashioned Permatex.

If you’re worried, just deeply score the surface with the Dremel wheel, and then tap a screwdriver through the last little bit. I ended up doing it that way because I was banging and banging with a chisel and it was just denting and not penetrating. It was hurting my hands so I decided to be prudent.

Not at all stupid.

One down. I’M stupid. Took a nice coolant bath

Haha, you didn’t drain the block? That’s some comedy of errors.

I have these in my roadside repair kit:

The core plug aperture is 1.75 inch and these will expand to size. My engine has the lip in the core plug opening so the need for the initial 1.5 inch size to seat properly past the lip,

But will these last?

I drained it after the plug was out.
I can’t believe it didnt seal with Barrs, it is everywhere

I had some of the rubber ones in Tweety for 20+ years.

On a 3.8 ALL of the core plugs can be removed with the engine in-situ, and very minor disassembly (IIRC, just the air cleaner can and plenum). The old plugs are removed using a looooooong drill and slide hammer. ALL but the 3/4" plug over the starter can be easily replaced using the Dorman copper expansion plugs, which most auto parts store will either have, or be able to order, for about $5 each. I have done this several times, on several cars, in a couple of hours. I once even replaced the one on the back of the head on the roadside.

I see no reason the Dorman plugs could not be just as easily used in a 4.2. I have NEVER seen a Dorman fall out or fail in any way.

Any recommendations what to use to seal freeze out plugs to the block?
Thanks much.

If you manage to completely knock the plug to the inside, it won‘t get far. The plug hole is almost at the bottom so the plug wouldn‘t be able to fall much anyway. 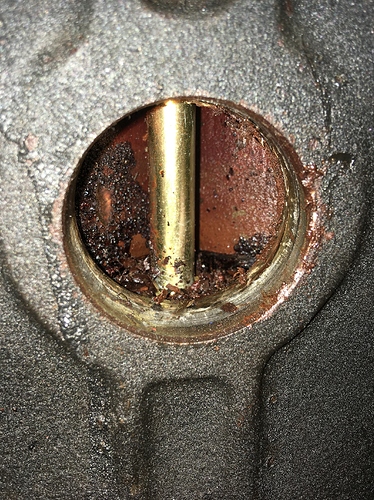 As Paul said Permatex works fine, it also lubricates it while you drive it in. Make sure the bore is clean and smooth. Also, don’t drive it in from the center, you will distort it.

Which permatex is recommended? There are multiple formulations.

It’s a little off topic, but can you removed the radiator cap while the engine is at full temp and not get any pressure release as a result of the waterless coolant?

I am wondering if the barrs leak isn’t going to work well with waterless coolant because there’s no pressure to pack in the sealing material to fill the gaps.

On the other hand, since there’s no pressure in the cooling system, it seems you might have been able to seal the leaky plugs from the outside with high temp silicone or something like JB Weld.