Could someone tell me if there should be screws holding the top trim panel (containing the chrome slots for the screen vents) down to the top of the main veneered dashboard panel on a 140DHC? These would be visible, so I would expect them to be chrome with cup washers if there should be screws. I know there are two in the centre for the mirror base. My dashboard is the original piece of wood and does have some holes in it, but I don’t know if these are original. The new top panel I have does not have screw holes.
Thanks,
Roger

Other than the two securing the mirror there are none on my XK120 DHC and the two photos I looked at in Porter of a 140 DHC show none, except those on the mirror base.

Perhaps your question could be answered by asking, is there something to be screwed into, i.e. a wood block?
On my 120 FHC there is one screw in the center and one at each end, all of which screw into wood blocks. But all 3 are hidden, the center one is under the mirror, and the ends are under the leather covering.

Other than the screws for the mirror, mine on a 120 DHC was held in place by the wood blocks on either end being press fit into the area below that piece. (Car is in the shop, I don’t remember exactly what was underneath.)

Thanks all - the holes in my original dashtop must be later additions. I have the correct new top panel, with the wood blocks. Unfortunately I am missing the folded metal bracket that supports the indicator switch and the mirror, so some fabrication is required. Then I have to struggle with the demister vents…

I would guess that when assembling, the dashtop is assembled to the main dash before installation, rather than fitted later on its own?

I would guess that when assembling, the dashtop is assembled to the main dash before installation, rather than fitted later on its own?

That’s how it seems to me, probably easier all in one, steering wheel not yet on of course, possibly the column also was not in. A complete assembly order would sure be useful. I wonder if they saved it in the archives, maybe JDHT has it now.

dream on!
A complete assembly order would sure be useful. I wonder if they saved it in the archives, maybe JDHT has it now.

Early XK120 FHC’s this panel was trimmed in leather

Yes, mine is green leather. 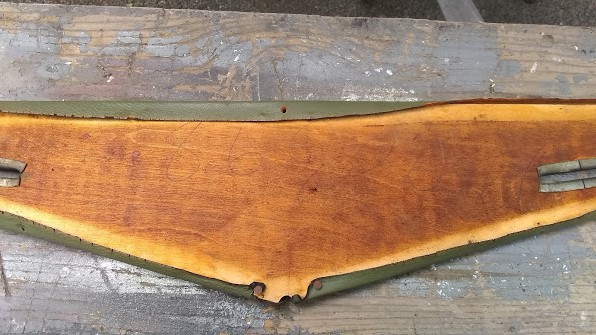 It has the number 86 written in pencil. My body number is 1187 so I guess they did a few green sets together and then somebody got them out of order.

Early in my career I worked for a furniture company and I used to write those assembly orders, every motion was timed. Jaguar was well organized in that regard, very little non-productive labor and wasted motion, which is how they were able to build such high class cars for such a low price, so they must have had such orders.

Hello, in my XK120 FHC it is possible to get the top trim panel in and out with no need to remove any other part except the rear mirror. I bought a new top trim panel from a well known supplier as part of a complete interior trim kit. It turned out that the shape of the panel was ok, also the distance between the two wooden blocks on the back side. But both blocks were to thick as well as to wide for the depressions in the facia rail. So I had to smaller their size. After fitting was ok I had to realize that the two slots for the outlets for the screen vents were not inline with the positions of the subjacent nozzels of the screen vents. The slots were to far away from the facia rail. So at the end I made a completly new top panel by myself. And now ask me which I am shure that it is possible to get the top panel in and out without removing everything else.
Regards Joerg

On my ‘140, there are no visible screws or fasteners, other than the screws holding down the mirror, going down into that trim panel.
For what it’s worth, the demister vent system actually works.

One day the windscreen was fogged up. 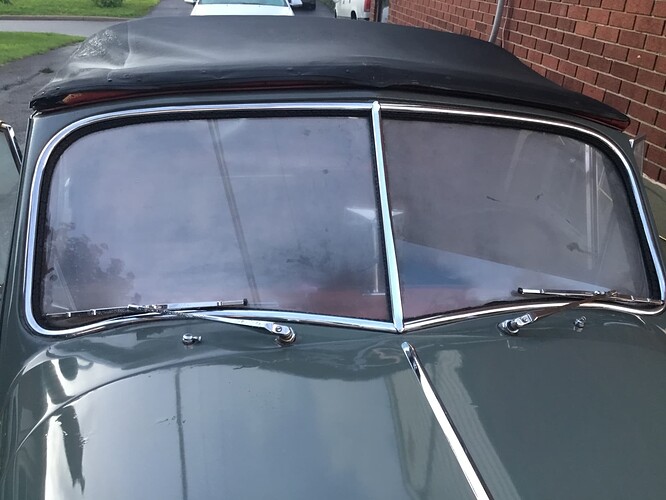 After idling with the demisters activated for a few minutes, the windscreen began to clear up, forming these patterns on the windscreen. 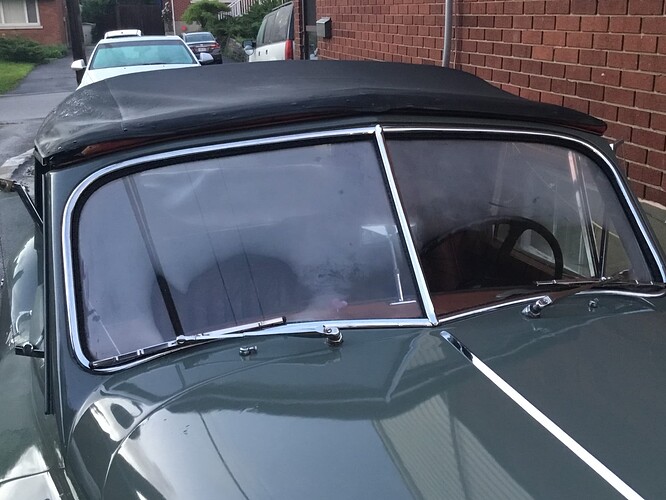 After a while it cleared up completely.