Had a question on this fan as its predecessor has been discontinued. So as a quick aid, did a comparison to my original heater fan. Also, there are others offering other motors that are closer to original is size, but still require modification of the mounting flange 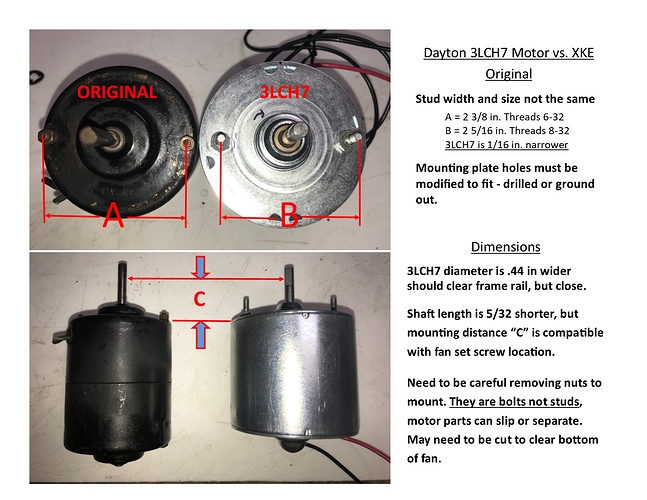 Interesting, did its predecessor compare closer ? Do you by any chance know what these other options are that are out there?

The previous version was a bit smaller. It is still listed in the Grainger catalog, but you can only order the one I spoke about. Most of the established Jag parts suppliers offer a motor and they vary in price. Terry’s offers one that is made in Canada, but you still have to redrill the mounting plate as the studs are larger and in a different location.

Paul Wigton put a Pontiac Fiero (I think) fan motor in Tweety. He said it was stronger than Grainger’s. I can believe that as I am not overly impressed with my original Dayton fan’s output.
Paul will be up soon and can add comments.

So while I have the car in the garage for the Winter doing a bunch of ‘little’ things before Spring, I wanted to upgrade the fan to go with the new heater core, crossover pipes and water valve. I checked the E-type previous threads, to find that an '85 Fiero motor was the way to go. I did a little more research and found that the ‘91 S-10/S-15 Sonoma had a motor and fan that would also work. The local parts store had a ‘91 Sonoma motor and fan for $45. I spent the day putting in the new …

Based on size and specs the 2M197, the previous motor that folks were using, may not have been as strong as the current offering. I ran both the original fan and the Grainger side by side. The output on the high setting was slightly better on the original, but not greatly different. At lower speeds you could not tell. The Grainger unit was also quieter and seemed to run smoother. But it is new and my original is a few years older.

Swapping one hard to find part for another is a trade off I guess. Depending on how much air you think you need and how long it will last. Also those who wish to make minimal or no changes to the cars would have a decision to make. Good to have options.

You need to change the fan that goes on the motor for it to make a lot of difference when changing to a fiero or granger or napa motor. The blades are shaped/curved and push more air.
Cheers Jim

Good write up on the differences. It’s a shame they no longer sell the 2M197. I swapper out my AC fan motor a couple of months ago for a 2M197 I had laying around in the basement for probably 8-10 years. Dimensionally it was virtually identical to the OEM motor.

That is what it looked like to me. Was wondering if some of the heater fan motors that are out there, such as the one offered by Terry’s, would be good matches. They look similar dimensionally to the Dayton. I used one to replace my heater motor and it works very well. Would have to confirm the mounting stud and fan clearance dimensions. One issue that is not discussed is that the use of a permanent magnet motor ( Dayton ) vs. universal. PM motors perform better at lower speeds. The fan design itself is also critical, but interjects many more clearance issues and possibly a judging issue for concours folks.

I tried the Dayton motor, and was utterly unimpressed with its only-slightly better performance than the stock motor.

The Fiero motor and fan was orders of magnitude better, and required only a little cutting, on the bottom, out of sight.

This one? Was the cutting to accommodate that raised ridge on the base plate? I wonder if it could just be flattened, or make a new base pate?

Erica;
As I remember the cutting was necessary to use the Fiero blower cage. The ‘raised ridge’ of the base plate sits ‘inside’ the blower cage. so that isn’t a problem. The diameter of the Fiero ‘squirrel cage’ (blower cage) is a bit greater then the original Jag squirrel cage therefore the hole in the underside of the heater box has to be enlarged. I did the enlargement with a Dremel tool. Once completed and installed it is not noticeable.
I originally bought a Fiero blower motor including squirrel cage off Ebay. When I tested it the motor ran but I didn’t think it was free enough. I then bought a new motor minus the squirrel cage from Rock Auto.
By the time I was done I don’t think the whole thing cost more then $65.
I don’t have any pictures of the ‘new’ hole in the heater box, sorry.

Hi Joel, I am restoring a 1966 e type FHC and am looking for an original heater fan motor and fan (squirrel cage). Do you still have your original motor, mounting plate, and fan ? Would be happy to purchase from you.
Jay Zinser

Jay;
I think the motor is not original as there is a yellow label giving directions as to electrical connections and there are four wires coming out the side. I think the mounting plate and squirrel cage are original for the S2.
Send me a PM in regards to purchase.

I use the Fiero fan. Easy and is difficult to see that it isn’t stock. I made one mistake, the big resistor NEEDS to be installed in the pen so that when the fan runs air is blown over it. Mine is external and gets quite warm.