Has anyone had any experience using Delron upgrade kits for rear suspension rebuilds. This kit is designed to replace hub carrier and fulcrum bushings, bearings, spacers, etc? Delron has the appearance of white Teflon but is supposed to be harder than steel.

I tried looking up Delron strength, and can’t find anything that even remotely comes up as you describe. The hardened steel races and needles in the stock bearings may not be forever, but I suspect they will long outlast any other substitute. They will last many, many years if installed correctly and lubricated regularly. There is a lot of force on those bearings and when the Delron holes begin to wear, they will cause all kinds of havoc.

One of the modifications to the X300/X308 vs. earlier IRS setups was to have bushings instead of rigid bearings, allowing the suspension to have some “set back” when hitting bumps, improving the ride.

Could this be the idea of the delrin?

Delron has the appearance of white Teflon but is supposed to be harder than steel.

Delron, or Delrin, is in no way harder than steel.

Just my opinion, but the stock bearing system works just fine and if properly lubed will likely outlast the vehicle owner.

If it fails, as mentioned, it would likely simply wear out faster so maybe it’s worth it to you to save assembly time. This type of failure is preferable to using one of the solid metal bushing kits. I had a failure in those which cost me a shaft, and if I hadn’t caught it in time likely would have cost me a hub carrier. It’s not possible to develop enough grease pressure to force grease all the way to the sides of the shaft and in between the shaft and the bushing because there is a small hole in top of the carrier over the zerk fitting which grease just squirts out of. Thus despite very frequent grease intervals my shaft bound to the bushing.

This problem doesn’t exist with the bearings because it doesn’t take much pressure to force grease into them. It’s honestly neither super hard, nor expensive to set up the factory specified bearings. I did have to read the manual about ten times to fully understand it but the doing part was simple enough.

Just my opinion, but the stock bearing system works just fine and if properly lubed will likely outlast the vehicle owner.

Not just yours: on the street, the stock set-up—PITA that it is— maintained, will last almost indefinitely.

Tweety, at 200,000+ miles, was totally original in the IRS area, save for a couple sets of shocks.

Jag knew what they were doing. If it ain’t broke…don’t fix it, till it IS!!

I had Delrin bushings turned for my front suspension. The shop says they are self lubricating and the shop uses them for all sorts of custom suspension applications

The reason I went with them is that my front suspension does seem to chew the regular bsushings and I ordered the poly ones from a supplier to install. The fit was terrible and could not use them so I had a shop machine the delrin.

I have been happy with them and there are no squeaks

I always think that the term “upgrade” is used somewhat optimistically when used for such modifications.

Delrin is DuPont’s registered trademark for acetal polymer and is classified as a thermoplastic. It can be molded or machined and is an excellent engineering material for light structural use and due to a low coefficient of friction makes for good bearing performance. Sometimes it is blended with teflon and becomes Delrin AF iirc. It would have zero compliance so I would assume make for a very firm and rigid feel to a car suspension. Probably good for racing applications.

It would have zero compliance so I would assume make for a very firm and rigid feel to a car suspension. Probably good for racing applications.

EVERy single bush in my race car was Delrin AF: easy to work with, and it tightens thing us amazingly well: I would not use it on a street car.

I have not actually noticed any difference on my front suspension!
Dennis 69 OTS

so I would assume make for a very firm and rigid feel to a car suspension. Probably good for racing applications.

I have used Delrin bushings in a number of steeet car suspension applications over the years, and have always been very happy. I have never seen any appreciable wear, even after tens of thousands of miles. It’s worth noting that Global West have also used it extensively for decades in their suspension systems.

I’ve mentioned this before, but my old ‘65 Mustang has no rubber in the suspension…all Delrin, spherical Bearings, and roller bearings. The car was NOT harsh or noisy at all…quite the opposite. Stiff bushings only create a harsh ride if they are causing binding. A properly designed solid bushing can not be allowed to cause binding…hence the use of spherical bearings.

I agree that there’s no point replacing OE bearings that are in good shape, but if I had an IRS that needed new bearings, I wouldn’t hesitate to use Delrin.

This is a not unusual selection of inner fulcrum bearings I’ve pulled out of E Types and XJ 6’s and 12’s over the years. I perhaps have lived in wetter area’s than some. I usually use bushings on re installs, although the last time I looked for a set I couldn’t find anybody who sold them. I’ve used both brass and Delrin without issue. They are a lot easier to install. 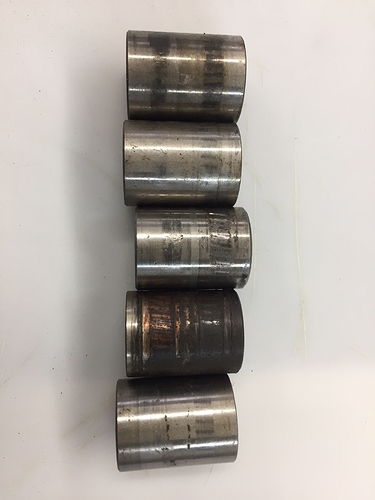 so I would assume make for a very firm and rigid feel to a car suspension. Probably

Correct. I’ll defer on the performance characteristics as I have no experience. The stock rubber bushing seem to work fine on my car but I don’t drive it hard.

I usually use bushings on re installs, although the last time I looked for a set I couldn’t find anybody who sold them

And REALLY easy to fabricate.

Delrin has the appearance of white Teflon but is supposed to be harder than steel.

Delrin is a family of materials with a range of properties, but it isn’t harder than steel (not in a Rockwell test).

In some scenarios it may be more wear resistant than steel, but that is a different matter.

It’s a great material to have around the shop as it’s relatively easy to machine, but I don’t think I would use it in a bushing exposed to as many psi as the fulcrum bushings.

I have done something similar on my front and rear suspension, but I wouldn’t call it an upgrade.

In my case, my Koni shocks needed new bushes and Koni quoted me GBP40 per bush so I decided to make my own.

The inside bearing is turned steel, the middle is a molded rubber compound and the exterior is Delrin. I chose this as it is very easy to machine on a lathe to be a press fit into the shock eyelets and the rubber compound has no problem bonding to both components bounding it.

As far as performance goes, it is probably a little harder than standard, but that’s not obvious as the rear sits on four rubber bushed cage mounts anyway. 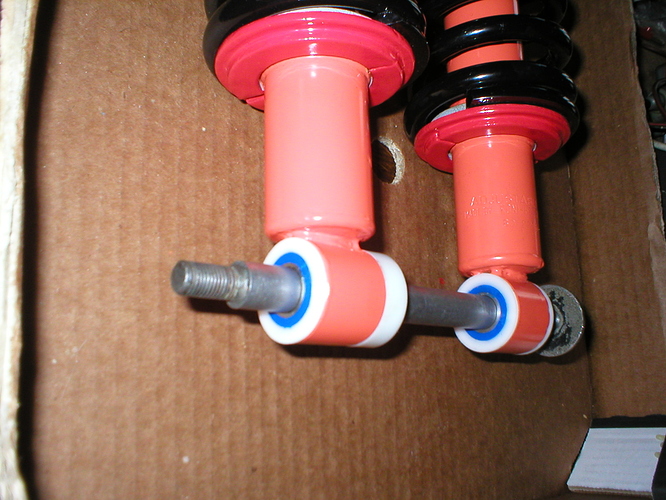 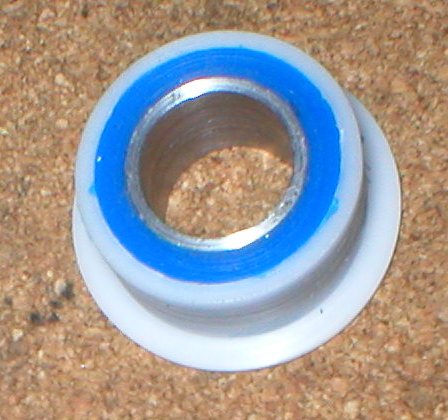 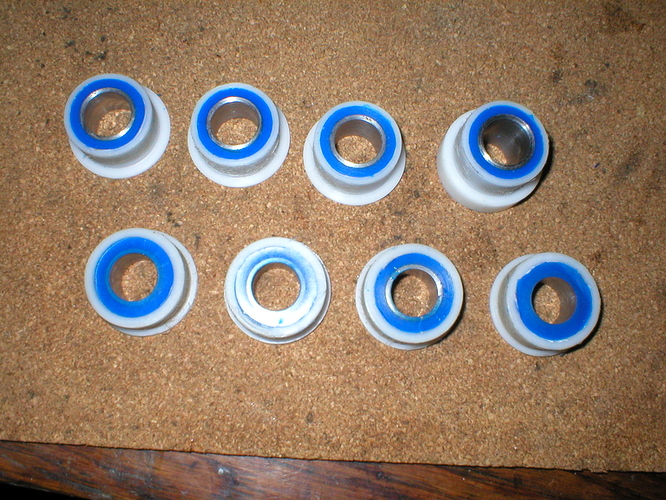 Tweety, at 200,000+ miles, was totally original in the IRS area, save for a couple sets of shocks.

200K? my bearing sleeves were trash. Don’t know how many mi but I doubt it’s go 200k. Odo read around 30K, so 130K sounds reasonable given what appears to be an original windshield so pitted I could only drive the car at high noon.