Dent pulling with a MIG welder?

After I remooved about 4 kilos of Bondo and / or its relatives from my bonnet, I have to pull out the dents. Some dents are crash-related, and some have their origin in an evil hammer which they used to make small holes to keep the Bondo in place !

Now, I do have a MIG welder, and ordered a 4" shrinking disc.

P.S. - I also posted this in the UK forum

They are sold here in the US by Eastwood and (nozzle only) on eBay. I’ve heard that they are inferior to the dedicated stud welders, though.

I tried one: didnt like it, and bought a dedicated one.

Also, I found not just a shrinking dolly, but a rotatable (by blows) shrinking hammer to be invaluable.
A slapping file is also handy.

The smaller shrinking disc is really for tight spaces. You will need the bigger one for most applications. Dent pullers are used when you’re working on a blind surface not accessible on both sides. There is no substitute for hammer and dolly when it comes to smoothing steel and with the exception of the valences all the steel in the bonnet is accessible on both sides once dismantled.

Paul, I have always found shrinking hammers to do more harm than good. They don’t really shrink the steel at all but pinch it inward, making it weaker. The only true way to shrink steel is heat, either using an oxyacetylene torch or a shrinking disc, the latter far easier to control and more accurate.

I watched a US resto on Youtube, and the pro used a fantastic bit of gear, that I REALLY want cause my car has so many small dents.

It allowed MIG to attach to a slide hammer on a frame, it seemed very simple, and worked brilliantly, one zap and it was on, pull the dent without detaching, then twist off, with minimal cleanup

pulling dents was its only job,

will try and find the link again

Hi Carsten,…studs are easy to weld onto sheet metal with a Mig Welder,no fancy attachments needed,as Nick said no point if you can get to the back of the dent.

I watched a US resto on Youtube, and the pro used a fantastic bit of gear, that I REALLY want cause my car has so many small dents.

Last week I stopped by at my body man’s shop. He is one of the two most gifted metal formers I have ever met (the other was a smith I worked with in the weldshop during my apprenticeship).

Despite great efforts, and various instructors and tools techniques, I myself have never passed the stage of being able to take a dented piece of bodywork and move the dents around a bit, so I always watch closely and ask questions when I see someone who’s good at it.

He had a door off and he was removing small dings. He had an ice pick with a rounded end, and he was just pressing the dings out (no impact, not even a lot of levering). I asked him how he could tell where the dents are (the door had been dipped, then sanded and had a few patches with the welds ground down, so the surface was mottled as heck). His answer was “You can feel them by running your hand over the surface” (thanks Yoda!) then he said “I use a pick for the final tuning, because you can’t feel the fine dents when you’ve been using a dolly and hammer for a while - it deadens your sensitivity.”.

When Salvatore is done and the car/panel goes to paint all it needs is a spray of high build primer. Watching him is inspiring, asking him about how it’s done is informative, trying to implement what I’ve learned is… frustrating.

P.S. - I also posted this in the UK forum

As others have mentioned, dent pullers are for when you can’t get to the back of the dent and with few exceptions, you can always get to the back on a bonnet. Or in some cases the “body repair” person is too lazy/cheap to do the job right as seen on my bonnet section. 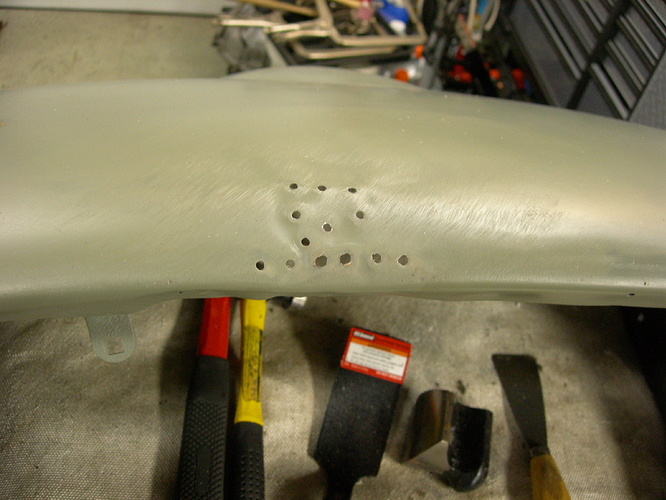 DSCN4750.JPG3072×2304 1.19 MB
I worked for a body “artist” many years ago. When the metal was dented to the point where the metal was stretched and he needed to shrink it, he used the old acetylene torch to heat up the metal and a normal hammer and dolly to shrink the metal. The combination of shocking and cooling the metal causes it to shrink.
I don’t have acetylene, but bought a shrinking disk and it does the job in a sense it heats up the metal to glowing red/orange and when the instructions tells you to apply water, it does shrink the metal. Pretty much the same as what the “old” guy did, but cheaper and noisier. I used the disc, water and hammer & dolly.
The “old” guy’s trick to pull a dent was to use a stick of led, attach it to the primed area and either pull by hand or use a hammer to hit the stick with while holding the free end of the stick in his other hand. Once the dent was pulled, he heated up the metak and took the led stick off leaving the metak wirhout any holes or scars. On occasion did he need to drill a hole and use the dent puller.
This wing was bondo’ed up and too badly dented from a previous accident and bad craftsmanship for me to tackle, so I had Chuck from Monocoque Metalworks do his magic. 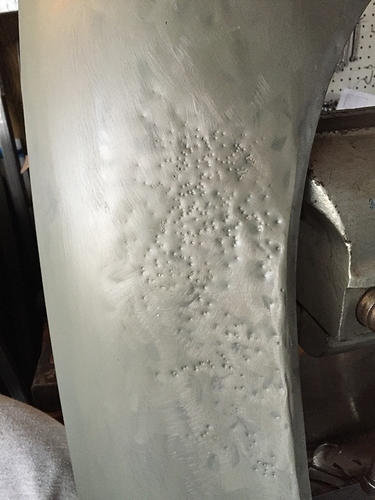 Those ungodly holes are made by a “production” oriented basher. Hoes for the bit of a slide hammer to pull the dent to a rough level. and then for the “plaster” to get a foothold.

The real guys believed that the former were members of the plasterer’s union.

Circa 1957, I worked in CAs imperial valley as a Claim Adjuster. My title was Branch Claim Manager ?? I had a collision claim in a small town. The car had moderate front end damage and it’s owner had selected a small one man shop to fix it. I went over the damage and wer agreed ona scope of work and the cost. It included a new fewnder aka wing.

The next week, as I made my rounds< I dropped in to see how things were going. The insured was there and both were extremely embarrassed. No new fender/aka wing. A lot of dolly work and the heat shrink method clearly shown !!!
Very workman like, but counter productive as to cost effectiveness.

“Gentlemen, don’t sweat it, if it’s OK with the both of you, it’s fine with me”. Costs more in labor time to fix it than to replace it? .

Everything youll ever need or want to know about whacking tin!