Boo Hoo, Last night during a storm that blew through my area a tree branch fell on the fender of my 86 XJ6 leaving a sizable dent and flaking some of the paint.
This, apparently, removes any chance of a dent repair outfit “massaging” out the damage.
I’m a snow bird wintering in Clearwater Florida and have had bad experiences with two auto paint shops here previously.
Does any of our members know of an outfit they would recommend based on their experiences??

Sorry I can’t help but you have my sympathy.

Pissed off that in 34 years ( I’ve had 11 years) no collision or parking dings and then an over night storm does this; 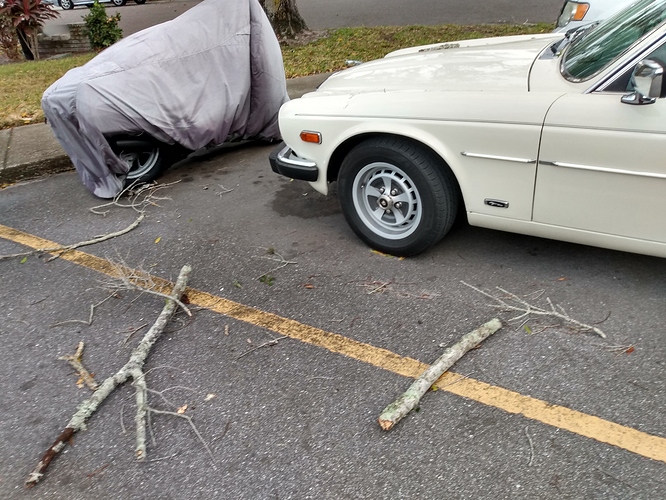 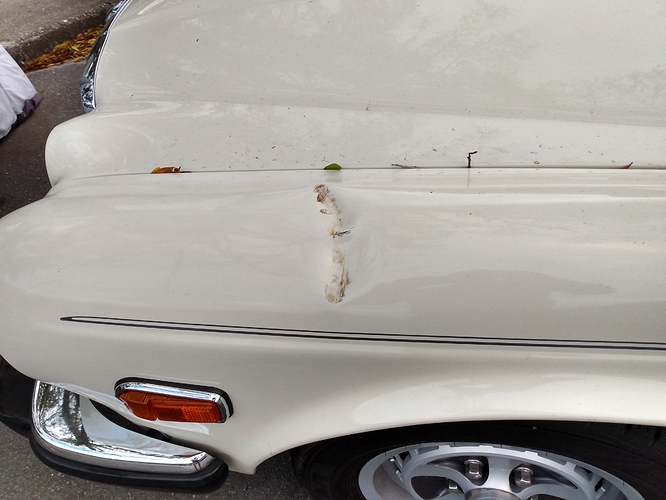 That’s a nasty one, that will require dollying and shrinking. Contact @CordaG , or @Pascal_G and see if they has any recommendations

the paint is cracked so this is a body shop repair… can’t recommend any shop in Clearwater since I m in Miami.

Way back in my 'grease monkey: part time college job. my boss bought the tool you might make work from a traveling “huckster”. utilized what AI much later recognized, a much smaller version of an “English wheel”. A “C” shaped handle. On one end was a semi movable “anvil”. On the other an egg like roller.

Place the anvil inside of the dent. Add oil to the painted surface. Pull the roller over the dent. it worked!!! I did a few cars for customers. and even removed a nasty dent on the front fender of my 37 Ford… in most cases, the paint survived!!!

A nasty dent but a good shop can get it back. Matching the paint should not be a problem but that pin stripe may give the shop a challenge. Good luck.
Phillip

I approached a couple of local dent repair companies, it seems as the paint has lifted they both recommended a body shop.
Quote isn’t that outlandish unfortunately my deductable just covers the repair and the association l live in accepts no responsibility for the tree limbs falling on my vehicle.

Two years ago l went to a recommended restoration shop to remove rust along the base of the windshield (a common complaint on the series three due to water sitting behind the perimeter trim) and replace the windshield at the same time.

Four months later, after returning three times to fix a leak, the rust appeared along the base of the windshield.

Aye, The HOA is probably correct in their determination.
Did they breach a duty? Failed to properly prune or remove a diseased tree? OTW, tis an “act of god”. No human responsible.

The "good’ is that"white is a “color” easiest to match…

Thanks for the offer Mitch, I’ll talk to my painter to see if it’s practical, I know I could fit it myself as it’s a bolted assembly if I remember correctly.

Lauriew,
Yes, the front fenders on your 1986 XJ6 are bolted on. I have some experience dealing with six of them when I removed them from my three Series III XJ6 parts cars.

Most of the bolts are easily accessible, like the ones visible on the top when you open the hood. The ones at the rear are not too bad but require removal of the panel at the rear of the wheel well in order to access them. The hard to reach bolts at the front can be a real PITA and require more disassembly and some colorful language to remove.

As only a sailor can provide,

You’re fortunate the hood didn’t get damaged. That must of been a pretty heavy branch or it just hit it the right or wrong way. I’d be upset too, but it could have been a lot worse.

Sorry to hear of this. From the photos I cannot tell if the car is white or cirrus gray. The gray stripe suggests you have a gray interior. When I had the brown stripes replaced on my cirrus gray '86 XJ6 with the factory fitted buckskin interior I had them done in the gray color your car has. I hope you will be able to find a competent shop to bring your fender back to its original pristine condition. Good luck

Paul, does removing the fender give any opportunity to do some corrosion-prevention cleaning? -or provide access to areas where corrosion may be lurking that is not accessible with the fender installed?

Tony,
Yes, removing the fender will allow cleaning and inspection of areas not normally visible in order to treat or prevent rust damage. However, it is a lot of work. One area prone to rust is the area at the rear of the fender around where the badge is located. But you can access that area and clean out debris by removing just the access panel at the rear of the wheel well.

The forward part of the fender is also prone to rust, but again you can probably get to most areas without removing the fender.

Despite all the complaints I’ve heard and read about for the series 1,2 & 3 both mechanical and electrical, I must say I’ve enjoyed every one, all as daily drivers.

They still are the best looking car on the road.

This one resides in Florida and being a retired Canadian Snowbird I only drive it 6 months of the year.
Going back to the damaged fender;

Estimates to replace it as apposed to beating out the dent save nothing and as there’s absolutely no rust on the car except for the lower corners of the front windshield I have decided to have the dent beat out.

The rust on the windshield base, I had addressed 18 months ago by a local, supposedly respectable restoration expert, it was a complete disaster, the rust returned within 6 months and he had the nerve to ask more money to fix it again! This issue I’ll attempt to resolve while they fix the dent.

I would like to thank all who offered advise and solutions to my problem, unfortunately the condominium association I live in accept no responsibility for their tree branches that fell on my car…and I’m $500 deductable insurance wise.