So, after converting to negative ground, replacing the distributor, plugs and wires, tightening and loosening the chain over and over (found a “better” but not correct middle ground) and setting the timing, I finally got the car out for a drive today - it was going to need gas soon anyway.

Despite having owned MKIIs for years, this is actually the first time I’ve driven a stock car on the road, and, I am not sure I am getting all the gears. I can feel a single solid shift, and no matter how much faster I go, no more shifts occur. At a guess, I’d say I feel this single shift at around 20 MPH. There is a “shimmy” or a sort of “odd feel” soon after take-off, and so I thought perhaps that weird feel was the shift from 1st to 2nd, but that would mean the shift out of first is occurring at 5mph , give or take.

SO - does anyone have a good reference point for their DG250 Automatic, and when it shifts? I tried using the speed hold switch to see if I could get a down shift - that would confirm I was getting into third, but no luck there- so either it just doesn’t work, or I really am just getting 2nd gear.

However, in some Jag models, they will start in 2nd if placed in 'D2"

(although it should still downshift to 1st at very low speeds)

Have you tried that ?

Hmm, possible the DG250 works that way, I’ve not read that in my research, but could be. I know Ford had the “green dot” transmission that caused some confusion - small green dot vs big green dot, I think one started you out in 2nd for better traction or something. The DG250 only has D and L for forward selections.

Change speeds for the DG box from the Haynes book of lies. 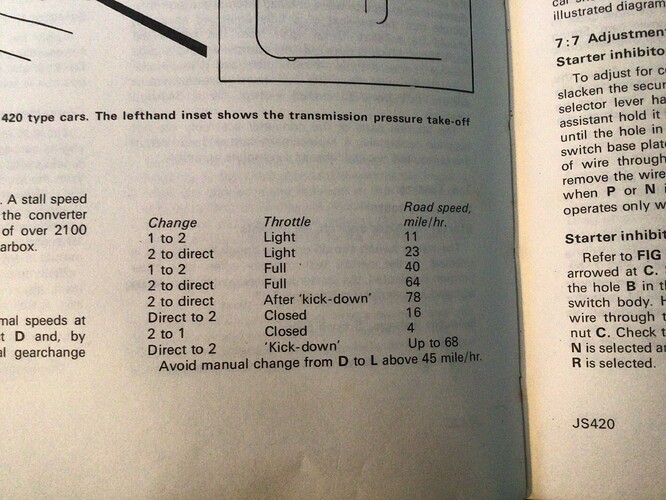 Still, I suppose those speeds generally correspond to what I was thinking in terms of the shift I can feel at +/- 20MPH.

Wasn’t DG250 depicted as actually a 2.5-gear-transmission, with speed-hold feature being the last 0.5 ?
I gess this would cause the second shift to be less pronounced … 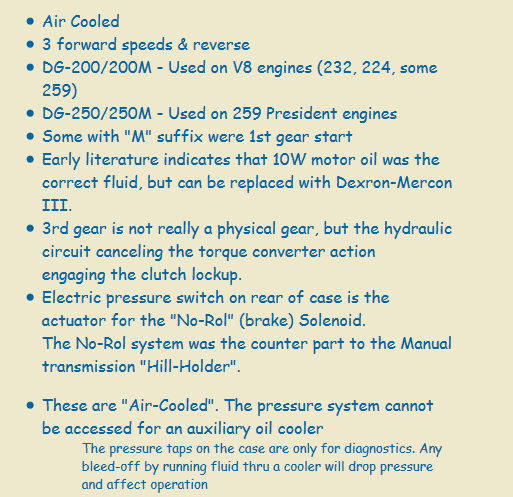 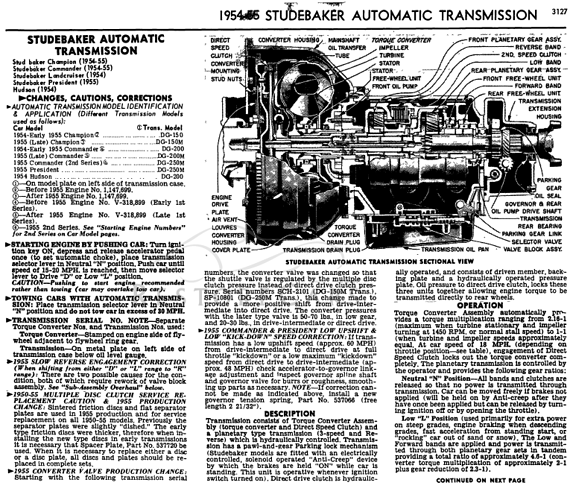 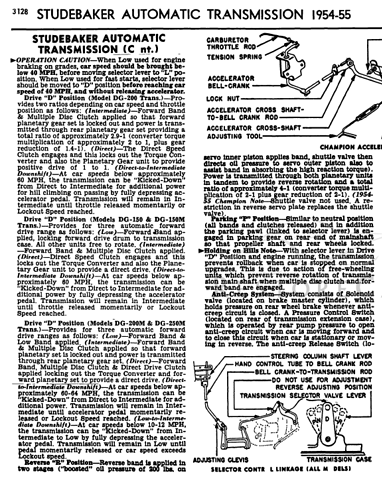 So I remembered that I had an older manual for the MKI and MKII, with the Automatic Transmission '56 - 61.

According the book, the early automatics were essentially 2nd gear start. “first” was available if put the transmission into “L” but if started in “D” you only got second - known as “Intermediate” and then above 18 MPH, you’d shift into third - or “direct”. When coming to a stop, throttle closed, the downshift from direct back to intermediate was at 12MPH, and Low was not available automatically, so intermediate (2nd) was as low as it went unless you manually selected “L”.

So the question I suppose, is which transmission do I have - early or late? My car is a '62, but it was built early '61. If I have the early type, then things are probably working as they should (except that odd shimmy off the line) and the speed hold system just doesn’t work. If I have the later transmission, then for some reason it is not shifting into Direct (third) and its unknown if the speed hold switch works.

i recently bought a 65 s type. when pulling away it started in second. spoke to a specialist and told me it was the governer lever on the gearbox that needs adjusting. fiddled with it a bit and got car pulling away in first and changed through the gears. needs a bit of fiddling about as this also determines when changes are happening. you can get to the pinch bolt on the linkage at the back of engine to make it simpler that gettting under car beneath gearbox. it describes it in repair manual.

What kind of revs are you pulling at , say, 60mph? This should give an indication of which gear you are in. Depends on the model ( 2.4, or 3.4\3.8) but a 2.4 should be pulling about 3k at 54mph, 3.4\3.8 would be doing 65mph at the same revs. A lot higher than that and you are not getting into top, which as previously mentioned is merely a lockup in the torque converter. If the " box has been out at some stage previously, it’s possible a small tube has been left out of the gearbox input shaft, which feeds oil pressure to lockup the clutch. A friend of mine had this happed to professionally repaired car, which took some troubleshooting!