Going to be ordering a new vinyl roof covering for the XJ Coupe. As far as I know, these were all black originally but there’s now a ‘tobacco’ colour available from the trim shop too, a mid/dark brown with a reddish tint. It seems to me that this might go better with the dark Regency Red paint.
Anyone have any thoughts on this ? Keep original or go for better looking ?

Hmmm! If you were to go for originality, definitely black. If originality doesn’t matter, why would you put a vinyl roof on the car at all?

I have a Regency red Series 1 saloon and have always dreamed of getting a vinyl roof in the “tobacco” colour (AKA biscuit, code ADE) or close to it. I think it would look great, especially with biscuit interior or similar. Since the 90’s or so I’ve even owned a pair of the C-pillar trim pieces (which are different for the saloon than for the coupe’) in anticipation. Some LWB versions of the Series 1 had vinyl roofs, and thus the trim pieces. The salooin roofs were also exclusively black, I think.

Thanks, Robert and John. I’ve never seen anything other than black either, but the thing is, John, that the Coupes always had a vinyl roof. At least, I think they did, have seen one or two without but assumed they’d just been removed by owners. I think I may go for the tobacco, after all it’s not irreversible if someone wants to go back to original.

At least, I think they did, have seen one or two without but assumed they’d just been removed by owners.

I believe that’s true. Jaguar went with the vinyl roof supposedly because the lack of B pillars would result in more flex in the roof, and the paint would develop cracks or something.

You’re right, any XJC without a vinyl roof was changed after it left the factory. But that change makes for a car that is sooooo pretty. I had a 76 XJ12C with no vinyl (pictured here) thats I sold for $4500 USD in a fit of poverty. Fortunately someone nearby recently gave me his abandoned XJ12C project car. The new one not only has no vinyl roof, it has a Series 1 front end grill and bumpers.

This is the much lamented 76: 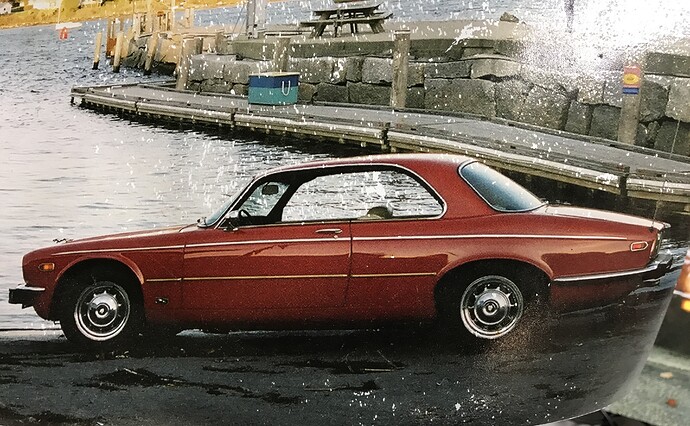 XJ12C project car. The new one not only has no vinyl roof, it has a Series 1 front end grill and bumpers.

Wow! Didn’t know that was possible. Must have Series 1 bonnet and wings, too (for parking lights)? The S1 style bumpers are a lot better than the US Series 2 rubber ones IMO. S2s outside the US had bumpers similar to the S1.

Yup the entire nose is Series 1. I can’t take credit, this was all assembled before I got it. 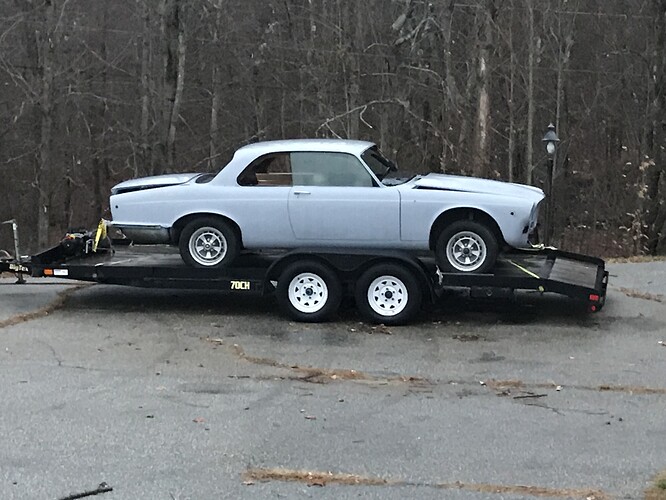 That looks nice ! Lots of potential there and another with no vinyl roof. There were stories that the vinyl was there to cover up joins etc., but personally I think they were just a fashionable thing at the time, e.g. BMW 3.0 CS. Cougar, etc.

Although with our car that will be the reason, as it’s fitted with an awful glass sunroof which has to go. There’s a scrap saloon nearby from which the owner is kindly letting me cut out the roof section, so recovering in vinyl afterwards will cover the grafting in. 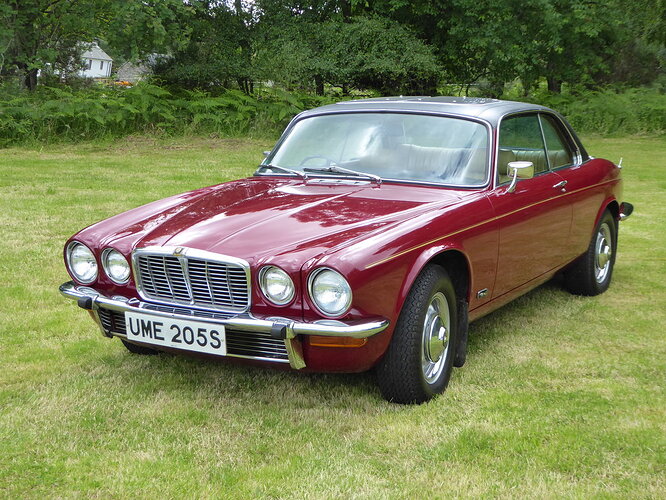 Well I was just about to put in a vote for no vinyl roof but it looks like you have a sound reason for fitting one.

The black roof looks pretty good with the dark red. Maybe you can get a swatch of the tobacco to see how it goes, I am having trouble visualising it.

If there’s any red in the tobacco colour that might count against it. Making a car 2 tone is hard to pull off. And your interior looks light tan so again there’s a risk of 2 tone.

Ours (#2J50041DN) is and was originally “Silver” and obviously with original Black vinyl roof and a “Dark Blue” interior.

The vinyl roof was an optional extra for any (4-door) XJ as well, although standard equipment only on coupés and the Series 1 and Series 2 Daimler Vanden Plas models.

It was definitely a deliberate styling detail, please take a look at any SS Cars / Jaguar design influenced by Sir Williams, starting from the SS1/SS2 Coupé /Saloon designs and how the later Drophead Coupés (SS1, SS Jaguar, MKIV, MKV, XK) looked. It’s a matter of style and I like it. AFAIK the Sir William influence on style ended with the introduction of the XJC in 1973.

The Jaguar XJ is one of the few cars in the world that stir emotions and evoke style. Take a look at the Jaguar XJ’s history in terms of design and technology.

Also please note there how the factory demonstrators and cars featured in factory brochures practically never had external mirrors fitted!

PS. BTW the car that was on the 1973 Frankfurt Auto / Motorshow, looks exactly like ours, except that we now have later (and slightly larger) mirrors fitted by an Italian PO.

There were stories that the vinyl was there to cover up joins etc., but personally I think they were just a fashionable thing at the time, e.g.

Supposedly because the paint would crack. I do wonder if there isn’t better paint available today.

an awful glass sunroof which has to go. There’s a scrap saloon nearby from which the owner is kindly letting me cut out the roof section, so recovering in vinyl afterwards will cover the grafting in.

Can’t blend that repair well enough? There’s another thread on jag-lovers about bodywork, and after reading what some of those guys are doing, I’d think welding that panel in and smoothing it and painting would be easy peasy.

Here’s a photo of the swatches - I think the colours are fairly accurate. I’m still tending towards the brown , but what does anyone else think ?

I once did a similar graft on a 2002, replacing a cheap glass sunroof with a factory steel sunroof. It worked out ok but here I actually quite like the vinyl roof anyway. 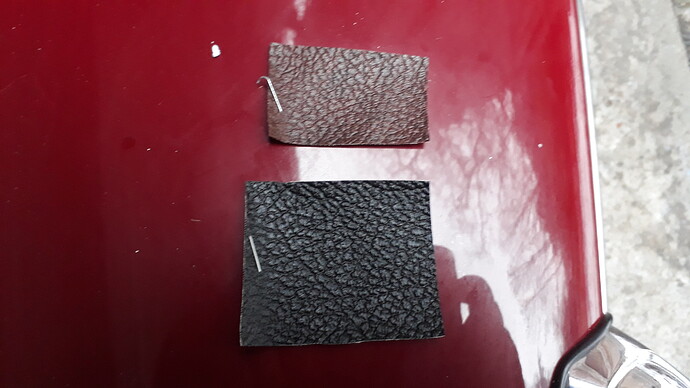 Dumb question: Why are you limited to those two colors? Surely somebody offers vinyl for car roofs in every color imaginable. I kinda agree with an earlier poster, matching the interior might look nice.

Why are you limited to those two colors?

I agree. I envisioned “tobacco” as being a bit lighter brown. There’s a common colour used for the canvas of dropheads–a dark beige/light brown similar to biscuit ADE seats. That’s what I think would look nice, perhaps because it reminds one of dropheads.

Before WW2 SS Cars had many different colours of vinyl for the roof and the trunk, usually contrasting the paint, on the SS1’s & SS2’s. I think later it would have been too much of a burden for mass production. So Black was the only option for XJ’s.

as much as I can understand the urge to omit the vinyl roof entirely, but, once one is to go on it should be black IMHO. Other colours look like white leather seats, whitewalls over spoke wheels or chromed alloy wheels - just a tad over the top! Or would you drive the car wearing a light brown suede suit with complementing wide green tie?

Just kidding! It’s your car after all …

Well, I don’t suppose you are, Kirbert, but they have to be pre-shaped with the seams etc. and as far as I can find out these are the only colours available in the UK from Jaguar specialist trimmers. Still, worth further investigation, agree that a fawn matching the interior might look nice.

You have a point, Jochen !

You could try ringing this company