Well buggers! The left output shaft on my differential was buggered. Looks like it was hit with a hammer in several places or perhaps banged against something in a previous life. The nut was difficult to get off and has thread damage. The shaft threads are also damaged. I have a thread repair tool - multi-threads on a square shaft and I thought perhaps it would work but it is the very end that I’m struggling with. I.e., can’t get a good nut to start. I don’t have a die or a split die. 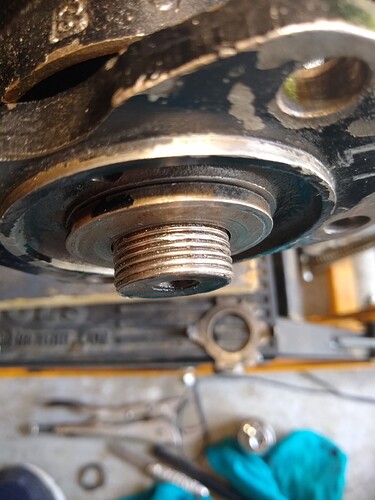 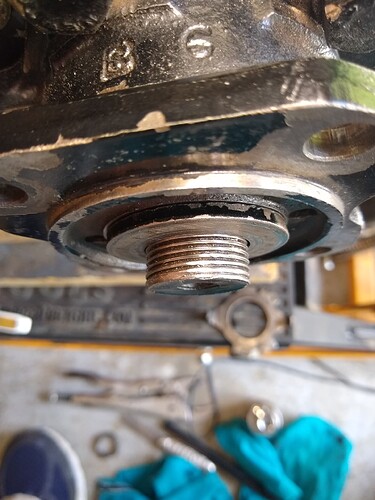 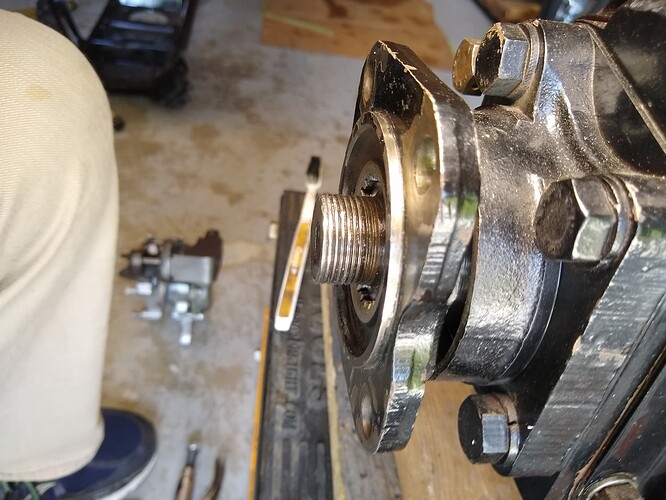 Also for the curious on an issue I put on the What did you do today thread, the one rear caliper handbrake misalignment I have is caused by the retraction plate (the handbrake fork) being bent. I was able to order new from SNGB. I verified the problem by simply switching the forks from the right to the left caliper. The miscreant fork actually seems a bit narrower so perhaps it was wrong for my S1 FHC? And…there was a crack at the base of one of that fork’s arms, so a good thing it came to my attention.

If you have a spare nut you can sacrifice for the cause, you can make an ad hoc thread die by cutting a slot in it so you can wedge it slightly open to get it started. Once started, you can clamp it closed with vise grips and rotate it to clear the threads. Alternatively, you just cut it in half. I used to employ this method as a field fix to repair the threads on structural steel anchor bolts which were cast in place.

That’s awesome Mike. Thank you! I’ll do just that. I have spent the morning here in Franklin, NC, a town of just 4000, trying to find a die, or at least determine what the thread size is…to no avail. But I’ll give your idea a whirl.

Meanwhile, I’ll measure the inner and outer dia of the threads; hopefully that’ll tell me what the thread nominal dia. is.

The miscreant fork actually seems a bit narrower so perhaps it was wrong for my S1 FHC?

There are two different retraction plates. One is 1-1/2" wide, and one 1-5/8" wide. I presume that this corresponds to the distance between the centers of the mounting holes, but don’t know this for sure. I guess that the difference is due to a change from 3/8" disc to 1/2" at some point. However, if the holes in your plate line up with the caliper, maybe I’m leading you off course…

Or use a thread file. Save me on more than a few occasions.

The shaft threads are also damaged. I have a thread repair tool - multi-threads on a square shaft and I thought perhaps it would work but it is the very end that I’m struggling with. I.e.,

That’s what the PO has and he has struggled with it.

Scot If you have a machinist in town I’d be tempted to pull the hub off, dismantle it, or have him do it, and have the threads restored on a lath. The hub is easily removed and replaced and easily dismantled. I don’t know what the thread count or pitch is but some of this stuff on diffs etc isn’t standard modern fare.

It looks as if the tops of the threads have been smashed over, this reduces the diameter. I am not so sure it’s repairable back to the same size.

If you are only trying to save the extruded male section, not the nut, I too have performed some ass-saving repairs with the same method Jim used

Well…grrrr! Not quite the progress I’ve wanted yet as I haven’t got the good nut to start on the shaft. I’ll try today with tiny files @Jagjim1 to bring dress the end thread but I really need a tap to do this IMO.
David the two retraction plates I have are different colors - one looks copper and the other brass - but the mounting holes are the same. So I’ve ordered a new one from SNGB. My discs are definitely 3/8" thick.

Mike S’s technique is really good and it is quite powerful in dressing the threads, but I feel the nut I cut has threads that are not a sharp as they should be. I’m reluctant to cut the better nut I have preferring to get a die. If you have a similar problem, the cut-nut technique is superior to the thread file…that is what I started with @mgxke. I have a good machinist friend but he hasn’t called back and I’ll try to chase him down today. It isn’t the hub Terry, it is the differential output shaft. My measurements indicate the wear pattern and runout are good, so I’m reluctant to upset the apple cart. I suppose I could take out the shaft by removing the bearing housing…that’s probably what you meant. And yes, Bill the tops of the threads are smashed over is several locations, but the thread file and even more so the cut-nut have fixed that. It is just the end starting thread I’m struggling with. I’m hoping I can use the shaft when I’m done and for the time being I set this aside until I get a die and fitted the seal and output flange to the right side. Here’s pics.

The nut as I cut it and a wedge to spread it slightly: 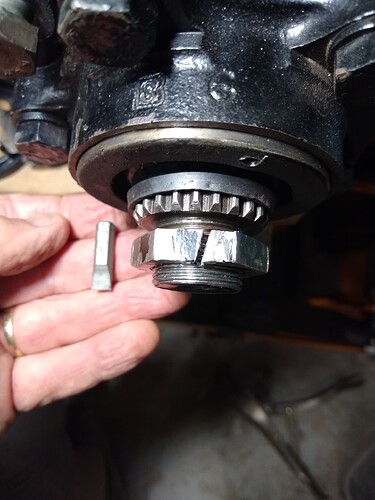 The cut-nut as it is uncompressed by the vice grips: 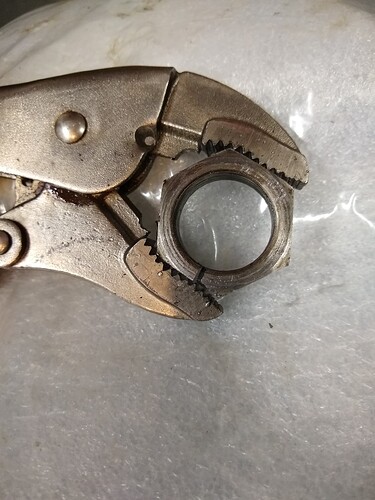 the cut-nut when compressed with vice grips. It threads on easily to the shaft and is quite powerful in straightening out the damaged threads. It’s a good technique. 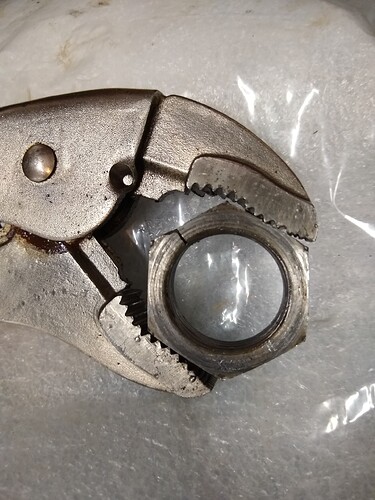 The cut-nut in place just prior to squeezing it: 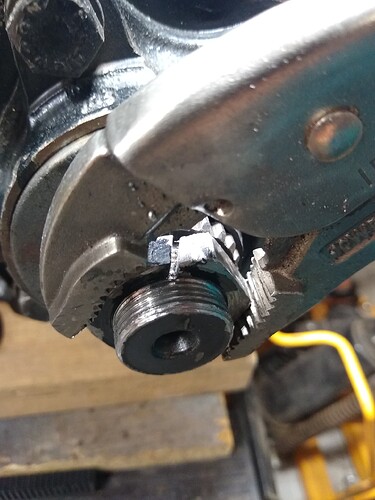 And of course machine oil to aid the process: 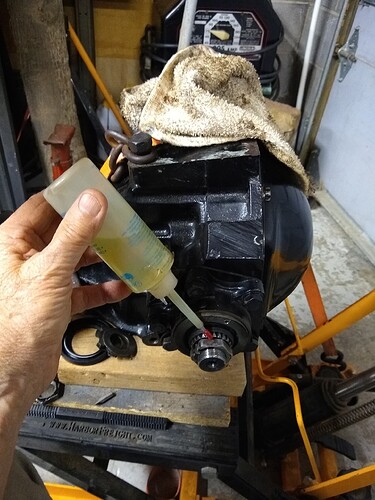 Tony, it is the shaft I’m saving not the nut. I’ll fiddle with the file again today, but the end starting thread was whacked with a hammer or something and that thread doesn’t track correctly now. The nut I cut goes on the shaft because it doesn’t have perfectly sharp threads whereas the good nut has threads that won’t accommodate that very first thread. I have filed the end of the shaft to 45 deg. to eliminate that portion of the starter thread but I’m at a point where I don’t want to take more off the shaft end. I’ll just wait until I get a die.

I was speaking to my machinist today at a car show, about your issue. He said fixing the threads with a lath is very viable, and if the damage was too extensive he would cut them to where it worked and make a nut for you to use on the new threads. I had to have this done 20 years ago or so on the output shaft on a transmission for an E Type. I’m not touting my machinist - he would do it for you but says any competent machinist can do the same.

My gut reaction is that 15/16"-16 is a really unusual size, but McMaster Carr stocks a split threading die in that size, so I guess it’s not that unusual.

McMaster-Carr is the complete source for your plant with over 595,000 products. 98% of products ordered ship from stock and deliver same or next day.

Tony, it is the shaft I’m saving not the nut. I’ll fiddle with the file again today, but the end starting thread was whacked with a hammer or something and that thread doesn’t track correctly now.

I would feel hopeful the issue can be addressed with a very small brand new triangular file.

The only bit I disagree with Jim, is it should not be “quick”. You should take all the care of a surgeon.

Examine the thread area under bright light and magnification

I think its best to start with the good threads inside, and work outwards to the “bad” ones

When you get to the bad threads, metal needs to be “worked”, both upwards and downwards.

If the worst thread is the outside, clean up the crossed section and file down any useless outer thread (ie tapered, so it is no longer affecting the nut)

I cant emphasise strongly enough you need high magnification and bright light, especially as it will be difficult to get at the bottom of the shaft if its still on the car

I saved something recently.
No other part was available, the vehicle would be off the road until I found some other solution at great time & possible expense

You have a badly damaged, marginal thread courtesy of some PO.

You can’t buy a new shaft, so you need to fix what you have.

Personally I’d attack it with a 60 degree triangular file first, assuming that the thread isn’t 55 degree Whitworth, which is possible but unlikely.

The other option is to remove the shaft and put it in a lathe and gently (manually ie not using the motor) reform the threads using an appropriate cutter.

At the end of the day this is a fixable problem; it’s just going to take patience and time.

thanks Terry for taking the time with your machinist. I do agree I could take out the shaft and repair it on a lathe. So, that’s the backup plan.

Mike, the size I’m thinking the output shaft threads are is unusual and hence why I’m reluctant to order a die for it. And sometimes I confuse my numbers anymore! Somehow I concluded 15/16"-16 might be right but I slipped a digit to arrive at that. However the 1" shaft is a valid possibility and it is a valid size: Unified Special. Here is a chart, note these are all 16tpi:

Agreeing with Tony and Andrew: I have new files; assuming they’re equilateral, they’d file 60 deg on each side of the thread and that is what the spec is. (I’m hoping it isn’t Whitworth.) The differential is on my motorcycle jack and I sit on a stool with lots of light and wearing my magnifying headset and I work painstakingly slow. My process is as you say. The threads beyond the end of the shaft are now in good shape; it is the end that is problematic. With my careful filing, the threads all appear to “track”. I.e., no visible cross threading. I’m thinking the minor diameter is still “swollen” from being pounded. That is hard to address directly with the files

A new idea. My machinist friend call me back and gave me this advice which he’s used for decades. Clamp my split nut - my cut-nut - on the shaft leaving just the out few threads exposed. Coat those threads with lapping compound and screw the cut-nut out a bit. Whack the flats of the cut-nut (squeezed with the vice grips) hard with a hammer on all its flats and rock the cut-nut back and forth. Turn it out a bit more and repeat. He says this’ll remove material and align the wayward threads. I’m going to try it.

If the end was mushroomed, you can either grind it down up to where the nut sits or lathe it. Trying to do it with a triangle file will probably only lead to frustration.

I don’t think you need any special tools the the cut nut, lapping compound or a file and if it’s really deformed grind the end you just need to get the new nut to start
It’s not like it’s going off and on every day
Some times nuts have interference so they lock up and there are thread gauges
Try the nut on the other side to be sure you have the right one
Get to it fixing a tread isn’t brain surgery
You’ll have to access the damage to decide how to fix it but using a lathe would be over kill for most cases ,in some the only
way
I have to wonder why was someone beating on the threads probably it was dropped?
Cheers

Would this rethreading die help?