I need some advise regarding setting up the diff, I have set preload and pinion depth, set preload on the main gear and this is the pattern I have, looking at he reference markings I have seen I need to increase the backlash, I just did that by moving a 4 thou shim from one side to the other but hardly made any difference to the pattern position, looks a bit low to me? does the tapered pattern mean anything to you?

I cannot see how to add a picture??? done it! 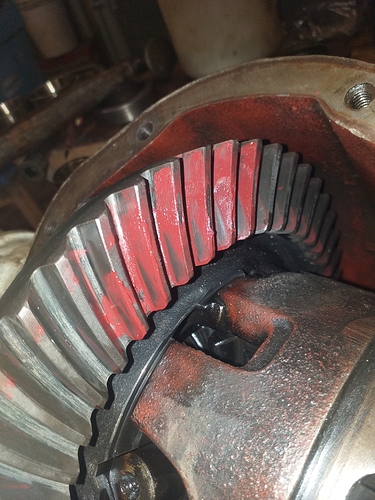 always open to advice, I set it to the Sailbury data minus the +11 etched onto the top, but I do think something is not right, 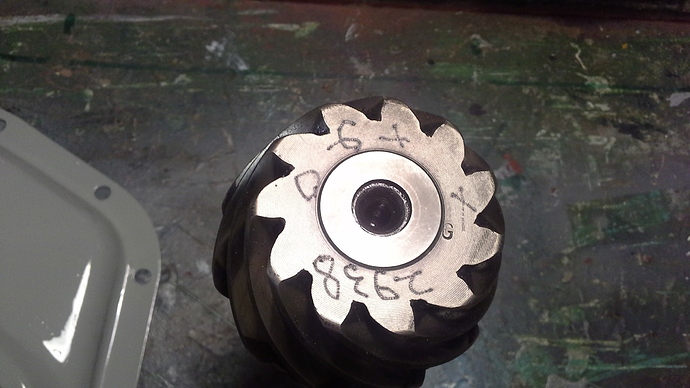 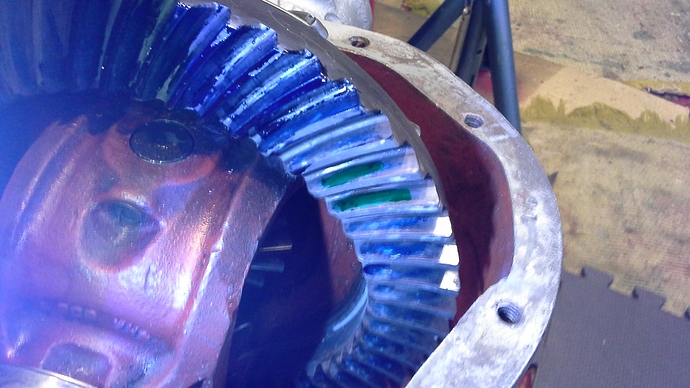 20171113_1348182560×1440 518 KB
You can just see the markings highlighted in green on the crown wheel.
There were some incomprehensible etchings on the pinion.
This was my MK9 a couple of years ago.
I had to dismantle it 6 times before I got it right.
It looks like your pinion is in too deep.
Hopefully someone on this site might be experienced enough to hazard a guess as to the thickness of shim required to obtain the correct setting.
matchlesspat (matchlesspat) May 11, 2020, 7:39pm #6

And another 6 times before I got the preload right!

been on it for two weeks so far, on and off, loosing the will to live,

After that, they always went to the gear shop.

Not surer if this will help or hinder?
http://www.mossmotoring.com/wp-content/uploads/2012/05/tooth-contact.pdf

Can’t help but let my wife drive the mark 2
I never knew it had a posi!
She loves it out of all the cars! 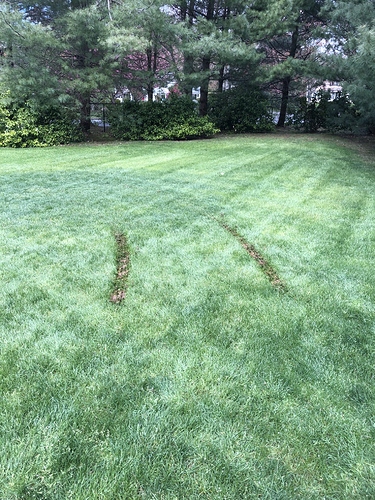 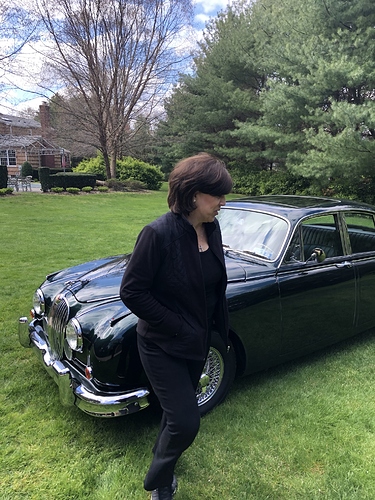 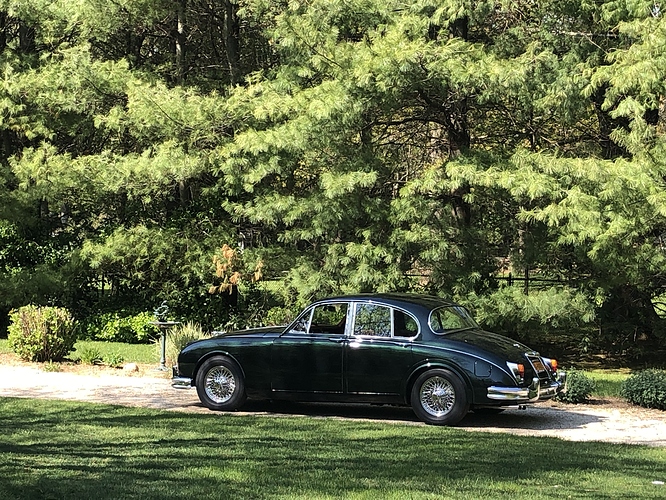 has a posi and it still works! they were std. fitment for 3.8, optional for others over here, mine was a late 240 but am going for just the look you have, small spats, wires although I will go powder coated, better for English roads in winter, fat bumpers, and a 3.4 engine, manual / overdrive,

very similar to the sheet I have but maybe the descriptions are a bit better, maybe I need to drop my pinion lower, would like to know as it would mean almost starting from scratch and removing all four bearings, again, just don’t see a tapered pattern like I have…… p.s. I am using lip gloss as the marking paste! like the shade?

If any of you are friendly with a rear end shop could you run my pictures past them? over here my nearest shop is in lockdown and he says he probably will not re open as he has had enough, I don’t want to take it to a stranger as I expect they will not like the fact that I tried to do it myself! and charge accordingly, I ran a BMW restoration business for 40 years and have a lot of tools but always avoided taking on jobs I was not skilled at, like shimming diffs……………

Well… that’s one way to test for it…!

I am installing a higher ratio power lock set into my old Mk2 240 axle,

What was the old ratio, and what is the new ratio? Are you replacing the PowerLok unit too?

I am not sure what the ratios are without looking down the shed but the 240 had a std. ratio for a MOD car, the one I bought was a 4HA power lock from an S or E type with independent suspension, similar year, correct ratio for a 3.4 or 3.8, found the unit at Beulieu jumble a few years ago for £80.00, the guy did not know it was a PL but I spotted it had two tags………. you do need to get a pair of top hat spacers that transmit load from one axle shaft to the other as an independent unit does not have them and you will never shim the rear wheel bearings without, the spacer from a non PL axle is different, I am going with a 3.4 engine,

Considering my last sentence I had best tell you of my own experience before proffering any advice. Up until 3 years ago I was rebuilding R-R and Bentley axles, with a few from Alvis and Aston Martin, this after a first Worldwide career in Automotive and Plant Engineering including Military gears. That is the shortened version, and on R-R post war six cylinder cars alone I rebuilt some 630 off hypoid axles in secondary retirement. You might appreciate that those units have to be super quiet and therefore deadly accurate.

Firstly you are running into a problem experienced by owners completing axle work and may I say a large number of rebuilders and specialists. The main problem here is misunderstanding of how hypoid gears are made, more later.

I would like to offer an analogy, and ask two questions of you, to illustrate your problem. If you were to contemplate using second-hand exhaust valves in your engine say because new ones were not available…….

(1) Would you take those valves and fit them in your engine as received, or would you attempt to reface and lap the valves? I would guess you would most certainly lap them into the valve seats.

(2) Why would you not therefore ensure the second hand crown wheel and pinion were also lapped together before use?

Your Crown Wheel and Pinion will have been running together with worn bearings and at best in different axle case positions, trying to match them without first lapping is a pointless exercise.

The gears you have were cut on a Gleason gear cutter and need lapping on a Gleason lapping machine, (probably cost about £120). Any gear company will then stamp the pinion with the new setting dimension, say for example, **2.625 inch. After making sure the pinion bearings are pre-loaded, (even temporary) the pinion will need shimming to achieve this **dimension. That measurement is between the raised facing on the pinion and the differential centre line. The Crown Wheel will then require positioning to achieve the required backlash figure.

Notice, no marking paste has been used, and neither was paste used on initial production, all that happened was that the operator replicated the gear cutters setting. Do you really think that a manufacture is going to paste up gears coming down a production track every two minutes, or are they going to use the gear cutting measurement? In small scale up market production, paste would be used, along with the Mark 1 Ear to finalise noise abatement setting and that exercise was carried out on a lapper. For my own part I have used paste only twice and that to quickly prove Crown Wheels that were “dished” during hardening.

.Pasting gear sets in cars originated with Bevel and Spiral Bevel gears when garages were little more than blacksmiths and had very little tooling. It was an easy way to match slow moving gears. Motoring technical illustrators embraced the method and the same type of illustrations continued to be published in motoring journals from the conception of hypoid gears long after more accurate methods could be employed. It is often easy to see that an illustrator has copied the text and sketches from years ago and sometimes even mixed bevel gearing with hypoid gears.

Earlier I mentioned the way Hypoid gears are made. Ask most owners just how they think the gears are produced, the likely answer will be by turning or grinding but nothing more will be forthcoming. In fact, after rough shaping the Crown Wheel for instance is rotated against a rotating set of chopping blades. After each cut the unit is advanced about 0.0006 inch and another cut taken. This method leaves a set of extremely fine flats on the gear surface that can be eliminated by lapping or operating the gears for a few thousand miles. Once gears are run out of line, (and that starts to happen immediately the gears are run under load), similar wear flats will occur, and they need eliminating to prevent gear noise.

You have not mentioned the CW&P ratio, apparently you are using the S Type and E Type axles but these had numerous ratio’s as did the gearboxes. If you are using a fully synchromesh gearbox , standard radial tyres and 3.4 engine I think you will find the 3.3:1 ratio useful.

ok, thanks, my old ratio was 4.55, my new ratio is 3.77, I have the original four synchro with overdrive, I have set the preload and pinion height with reference to the etched +11 but I did not expect it to be correct out of the box, that is why I have used the lip gloss, I do not expect it to be Rolls Royce quite, and yes I have owned a couple, but I do not want it to sound like my 1914 ww1 motorcycle with straight cut 8DP gears! I know it is a way out due to the noise when on overrun in reverse, by hand not actually in the car!, I feel I must be able to get it to a reasonable standard by myself, can you offer any advise regarding the pattern and the noise / notchy feeling when driving the pinion backwards from the crown wheel?

Have you called Alan Slawson of AES in Essex? He is the guru on these issues here in the uk.