Hi Guys, do you happen to know where the diodes for the turn signal indicator is? I have a problem with it as they only flash for a few blinks
Thank you

The indicator stop after few blinks but external are good so. Left indicator will go off after 3 blinks and right will after 7 blinks so I think it’s the diodes.
Are they right before the sockets or somewhere else
Thanks

Remove the tacho and speedo, Charlie - the diodes are ‘thickening’ of the wires…

Here’s how the diodes are installed in the harness 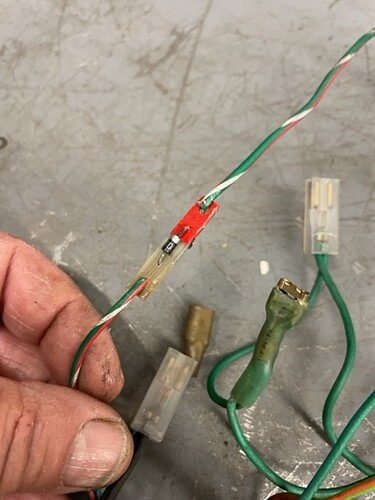 If you still believe the diodes have failed, remove the dash indicator bulbs and test the diode side of the dash socket to ground with a meter.

Hi Ron,
Thank you for your though.
The exterior lamps are all good no pause nor blind, just both indicator lamps that will stop blinking after 2nd (left) and 6th (right) blink. The event is so constancy so I don’t think a poor contacts from where else caused it. To me it is likely a de-rate diodes after years that allow the current to go through it after a while.
I will see if I can find the diodes easy or not this morning.
Thanks once again.
Chalie

The point that I was making about exterior lamp/socket contacts and bulb hazing relates to load resistance. The exterior lamps may appear to work; however, if the resistance is too high (due to a corroded contacts or a bulb that is close to failure) the DAC1731 may signal that by stopping the indicators from blinking. If the load resistance is near the threshold, it can exhibit the “few blinks then stop” behavior that you observe. Yeah, I’ve analyzed at the DAC1731 internal circuit in detail.

Your theory regarding derated semiconductor diodes is very very unlikely.

[quote=“Chalie_Bhichaisornpl, post:8, topic:427163, full:true”]
Hi Ron,
The event is so constancy so I don’t think a poor contacts from where else caused it.
[unquote]

The respective dash bulbs are grounded through the unpowered outside lamps - ‘right’ side with ‘left’ blinkers, and ‘left’ with ‘right’ selected…

Doesn’t fully explain the difference between the two sides - or indeed that both sides should fail. at the same time. Which equally applies to the two diodes…

It would, maybe, simplify matters if there were some differences to the external lamps - front/rear, side to side, and side markers if fitted? You could set ‘hazard’ to better compare - and see if there are some lamps lit that should not be…?

That said, there are three reasons for a bulb not lit (apart from a failed bulb); no power, no ground - or same voltage to both sides of the bulb.

Once solved, the problem will of course be blindingly obvious - but it escapes me for now…

This is about indicators in the cluster. Out side all working well
Thanks

Hi Ron
This morning I change one of the indicator bulb to 2W and it is working well one one side but very dim. I tried with 5W then no blinking at all so I thinks it’s the diode
I will try led bulb this evening as it consumes lesser so it should work better and might not need to use diode after all as LED is diode
Thanks
Chalie

Chalie,
I had this problem with the left turn signal indicator in my 1990 Series III XJ12 about a year ago. I didn’t find anything wrong when I checked the bulbs and bulb receptacles so I removed and replaced the flasher unit (DAC1731) with a known good one from one of my parts cars and that fixed the problem.
If I were you I would remove and replace the flasher unit before searching the wiring harnesses for those diodes.
I am a big believer in Occam’s Razor and over the past 20 years of Series III saloon ownership I have found that the most likely cause of a problem is often ( but not always) fixed through a simple solution.

The DAC1731 pilot circuit (dash indicators) is driven off of the collector of a PNP transistor. It is internally biased and is insensitive to reasonable loads. Using a 2W, 5W, or LED (correct polarity) is not going make any difference to the pilot circuit. More likely, the act replacing and reseating dash indicator bulbs in their sockets made it work.

Using LEDs in the exterior lamps is a more complex topic, which I will defer for now.

To Paul’s point, the Hella TBB44/DAC1731 circuitry is far beyond its design life. The internal components are all discrete consumer-level (I call it 1960s Japanese transistor radio construction). The circuit itself is an asymmetric duty-cycle R-C monostable with 2 current sensors (main and pilot). After 40 years, electrolytic deterioration in the R-C timers is a possibility.

Too long ago to remember the exact details I had some turn signal weirdness on my '87 Series III. I do recall that the dash indicators and the exterior lamps were, for lack of a better words, not in concert. I also remember replacing the flasher solved the problem…even though it didn’t seem a likely culprit at the time.

Hi Paul,
I think you are right as I am getting dirty signal signal from C output (to the indicator blubs) of the flasher (Lt.Green/Brown line) with weak positive (+) instead of clean negative (-). At first few blink, it is clean then dirty. It is odd that left and right indicators don’t have the same character one 2 blinks and the other 6 which might be because the total load from front and rear exterior blubs. I open the DAC1731 and saw 2 capacitors 47uF which could be the caused for dirty signal so might try to replace them first.
DAC1731 is extremely expensive here (Thailand) because its Jag so I wonder if this one is on other brand as well such as VW, BMW or Merces which is definitely cheaper.
Will up date you this weekend
Thanks,
Chalie

Thank you Ron, I will change the 47 uF 35 Volt capacitors today

I changed both capacitors but the problem is still there. It is OK if I use LED bulb instead but I will look for the right flasher. What I found is something looks very similar, from Hella too but for Porche. It is marked as C2, not C as on DAC1731 so I didn’t buy it.

However, while I removed the flasher in and out many times somehow the +line from the ignition key to the wiper fuse at the box is gone, no current to this fuse. I can’t find yet where it is loosed or cut. So this could be my Sunday work.

I could not find the wiring diagram for the ignition switch or the wiper for my 1976 Jag. Could you please direct me to. Thank you

Guys, I found it and noted that there is a round load relay so that could be the problem because I contacted it. Will check it tomorrow morning. Thanks