Yes, the original wheels required tubes. You can buy modern replacements from Dayton (and perhaps others) that are designed to be tubeless. One way to tell the difference is the originals have chrome plated steel spokes and Dayton replacements have stainless spokes. I don’t know what grade of stainless is used but it might be one that isn’t magnetic. I can’t recall if there are any markings that differentiate the two wheels.

You can put tubes in tubeless radials. Be sure to liberally dust the interior of the tire with talc. And be sure to remove any stickers or labels from the inside of the tire.

I steer away from putting tubes in tires. Tubes seem to have a tendency to blowout whereas you run over a nail with a tubeless and it normally just goes flat.
Go ahead … ask me how I know … 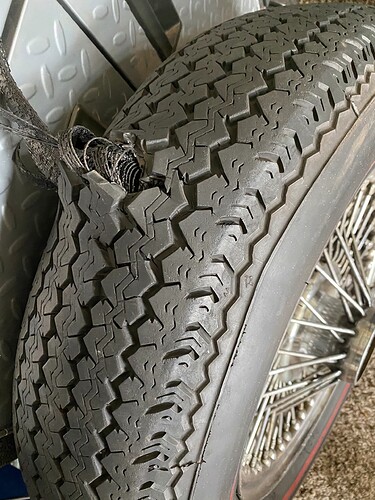 I have a difficulty in understanding how the presence of a tube can do such a destruction of the tire when a nail punches it while without tube it would slowly deflate through a small hole.
With an additional layer (the tube) seems to me that the air would escape more or less at the same rate through the two holes.
Am I missing something?

Most of my wire wheels, including new Daytons, require tubes. It’s largely because they slowly leak no matter how I try and seal them.

The damage shown in the picture was not as a result of having a tube in the tire: that damage was a result of a object and/or carcass failure, or age of tire.

Stainless Dayton aftermarket wheels leak through the spoke holes when the sealing goop fails inside the wheel. In 5 years, two of my Daytons needed tubes when started to leak at the spoke holes. The other 2 are still holding air.
I believe I’ve seen on a forum someone re-gooping the inside of their stainless aftermarket wheels.
Putting a tube in is just a quicker solution.
Yes, one tube failed and had to be replaced this year. Maybe more powder?

John,
What was the date code on this tire and when did it fail?

This happened several years ago. The tire date code is lacking the full amount of digits as to what year it was manufactured. That means it was manufactured prior to the year 2000.
Fortunately, the tire was retired and not being used (due to its unknown age) and blew all on its own while just sitting in the corner of the garage.

Fortunately, the tire was retired and not being used (due to its unknown age) and blew all on its own while just sitting in the corner of the garage.

I had that happen on an old Austin Healey that I had dragged into my garage: the tires had been fairly new in 1960, and I had dragged it in in about 1985!

I had put enough air in the tires enough for it to roll it into the garage. Later on I’m doing something and kaBLOOEY!

Scared me half into next year!

The way you can tell the difference is that tubeless rims have sealant around the inside of the spoke nipples. The originals may have some tape to prevent the nipples chafing the tube, but aren’t sealed. My Daytons are still leak free after thirty years of service.

I bought new MWS wire wheels for my E-type 9 years ago. No tubes. Still holding air no problem. Good product. I’ve recently bought a set of MWS wires for my XK120.

Maybe modern Dayton’s are better these days, but my experience is that the sealant on the spokes is vulnerable during the operation of tyre removal and replacement, particularly if carried out by someone who doesn’t know or doesn’t care. The action of the tyre bead as it drags across the spoke sealant during fitting/inflation tears at the bond between the sealant and the wheel rim. Perhaps some smooth tape (eg aluminium tape) applied over the sealant together with better lubrication of the tyre bead would solve this. I plan to try to reseal the spokes of the Daytons on my Series 2 when I replace the tyres later this year - I recall @Ahwahnee posting a good tutorial here a while back on the way he does it.

I got Dayton tubeless wires for Tweety (purchased in 2002), and through two sets of mounts/dismounts, and about 10k miles, never had a single leak.

It probably helped that they were center-laced, so no spoke nipples were exposed near the bead.

I had tubeless Daytons on my 2+2, part of the group buy back in the early 2000s. Never leaked, never a problem as long as I owned the car. I’ve had them on the FHC as sell, nary a problem since I bought them 5+ years ago. I’d be inclined to pin the blame for problems on ham fisted installers.

Mine only leaked at a couple of the spokes. Just my opinion, but the sealant looks sparsely and inconsistently applied and certainly vulnerable that close to the bead: 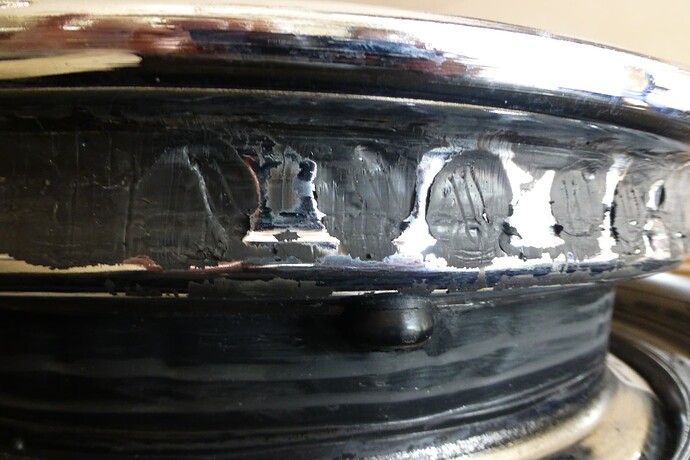 I do not use tubes in my E type with steel wheels that require tubes. If I had wire wheels I would experiment using FlexSeal, that thick brush on rubber coating?
Glenn

I would experiment using FlexSeal, that thick brush on rubber coating?

Do not do that!

The stuff is garbage! If you’re going to do that, you need to rough up the area around the spoke nipple and rim, clean it with something like acetone, and then use a good quality urethane.

It strikes me that sealing a wire wheel is like sealing a sieve. In my experience, inner tubes perform that job well, without more problems than sealed wires seem to have. They are not perfect, but I have more confidence in an inner tube than some goop spread over a constantly flexing joint between the nipple and the rim.

Properly done–and that is the key question; has it been done properly? –– it works fine.

Many people on the list of had complete success with the ones that are properly done, yours truly included.