I have this question regarding the door cards. Should the door cards, original or replacements, have a detente cut or relief cut vertical in the inward facing of the panel which then allows the card to then bend inward to fit the door drain channel and also the bent front chrome piece. The front chrome piece on both the original and replacement are bent which implies this should be the case ? Is this way the cards should be attached ? If the card is left flat,which looks best when the door is closed, How is the top chrome piece fitted ? Another First World problem causing me much anguish ! A picture of an open door with properly fitted door card would be helpful. Thanks

In my limited experience the card is bent to conform to the chrome, without any reliefs or cuts. Once all the mounting pins are properly inserted in their plastic pockets he card will stay in position and take a set to match the bends in the chrome.

The door card does indeed need to bend to fit properly along the top edge and follow the chrome. My new ones (FOR MY '63) had a crease but I fit another kit for a '67 that the door cards did not have the crease. I bent them over the edge of a table first, then fit them to the doors. 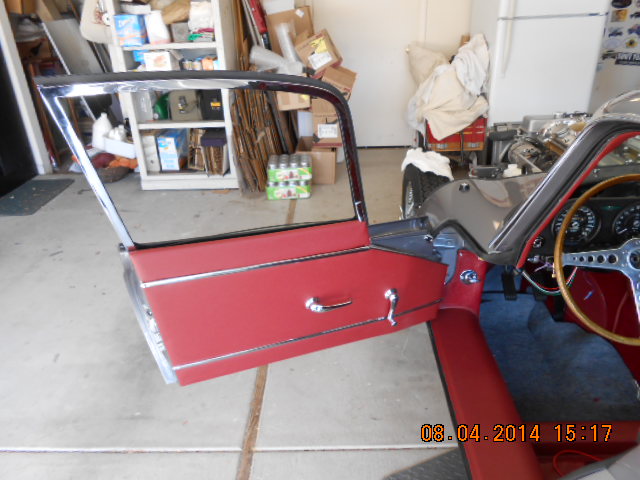 I used plastic door carding material, so used a heat gun and a bench to fit them to the door.

Yeah,I think since this is a PO’s car, I think what John Walker mentioned might be key…“mounting pins are properly inserted in their plastic pockets”. I don’t have any detail as to the hardware used to attach so will have to go to my parts book. Thanks for the pic, JCarey, that will help as well.

mounting pins are properly inserted in their plastic pockets”.

To try to further explain, you attach “door trim clips” BD18068 into small circular cutouts on all sides of the door card except the top. Those clips, what I called pins fit into plastic sockets, BD25375, that fit into corresponding small holes in the inside door frame. They hold the door card in position.

The below illustration may help explain it. It’s for a Series II, but I think it’s the same for a 1967… 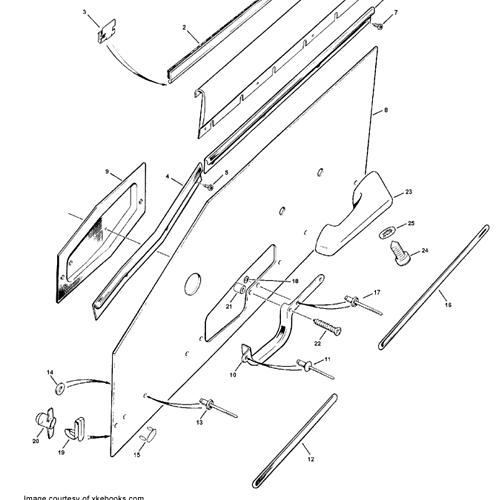 I will check it out later. Tomorrow I go to the E Event in Scottsdale. It’s sometimes

difficult when the car has been “reupholstered” by less than the best folks…missing, jury rigged parts, etc.

I will definitely check it out.

Just did the top chrome finishers yesterday on 877307.They are held on by little clips that are riveted to the metal top piece that also holds the felt.The usual only sent me two clips when you need about 10.Used clips from an mg midget.They only require a slight modification.Whole job took about 10 min.
DJ

To try to further explain, you attach “door trim clips” BD18068 into small circular cutouts on all sides of the door card except the top. Those clips, what I called pins fit into plastic sockets, BD25375, that fit into corresponding small holes in the inside door frame. They hold the door card in position.

John, I am also working a 67 S1. I have had a devil of a time because the new but very old door card. While high quality, it is made of masonite, probably 1/8 inch. I had to really fight to get the upholstery clips installed in the Masonite due to its thickness.I also had to open up both of the chrome strips to get them to fit the door card. Needless to say, the panel popped right out. The biggest problem is likely the masonite which is like spring and doesn’t want to stay bent. I also do not know the pedigree of the card clips although they do look correct (but do not hold the card down in the front.)

The ONLY thing I know to be correct is the holes in the door for the clips. I ordered a set of BD21133 clips from XKS yesterday. They did not mention the BD 18068 or BD 25375 parts you mentioned. I also can not find the two you mentioned in either my catalogue or my factory parts book.Where is your picture from?

And finally, my biggest problem may well be the masonite.I am considering scribing a line on the back and going/cutting/routing grooves to relive the masonite so I can bend it around the door. What would you suggest? Thanks so much!

Masonite just doesn’t seem like the right kind of material for that application. As you’ve discovered it doesn’t like to bend and doesn’t like to stay bent when it’s forced. I bought door cards from OSJI when I redid my doors, they fit perfectly. They are made of the correct card stock that has the right tradeoff between flexibility and stiffness.

The plastic sockets used to be available. Terry’s Jaguar Parts says they are discontinued.

Moss is offering these in their place.

The very bottom of the picture reads XKEBOOKS.COM. They sell copies of the Series II parts manual. I’ve never bought a parts manual, instead I’ve relied on the catalogues from SNG and XKs along with Bentley’s and Haynes manuals. The image I posted was a screen capture most likely a snip and post from someone else’s earlier post in J-L.

The plastic sockets used to be available. Terry’s Jaguar Parts says they are discontinued.

John, this is pretty strange. I called a major West Coast Jaguar parts supplier and the tech expert said I needed BD 21133 (which look just like what I was using but I don’t know where they came from. I ordered 22 and they will come from Norfolk next week. So I have been thinking about this problem I have and found your note this morning. I checked my first source and they did not have this p/n’s. Then I checked the p/n’s at SMG Barratt and they had both of your numbers, but also in stock . I told them I had BD 21133 on order already, and I discovered (he told me) that BD-21133 is the same part as BD 18068, “just a different p/n, but the same part”. (That must drive people nuts who worry about inventory management and interchangeability.) So, I ordered 22 BD25375 cups. I am coming to the conclusion that I need to replace the masonite also,
Best, Mike

John, this is pretty strange.

Could be that Terry’s just discontinued carrying them.

If you are good with an Exacto Knife you could buy the stock at an upholstery shop and cut your own, using the Masonite one as a template. My recommendation though, would be to go to OSJI (or another supplier) and buy them pre-made.

Mine is Masonite as well and was supplied by Bartlett, now OSJI, back in the mid 80s. One of these days I’ll call OSJI and see what they are supplying now. I had NO idea that the plastic receptacles were part of the mix.

Mine is Masonite as well and was supplied by Bartlett, now OSJI, back in the mid 80s.

When I bought my 2+2 one of the door cards was made of a piece of wall paneling, think woodgrain and grooves, covered with the correct vinyl and padding.

The only reason I can think of for the plastic receptacles is to block the ingress of water.

There’s very little bend in the door card and if the material is suitable, the standard metal clips ought to hold it in position. On early cars, there was also no upper chrome trim on the front part, just a length of beading so they relied entirely on the clips to hold the shape. 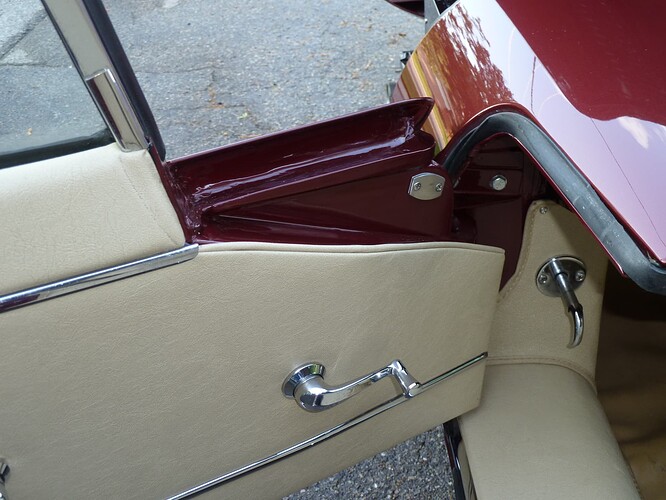 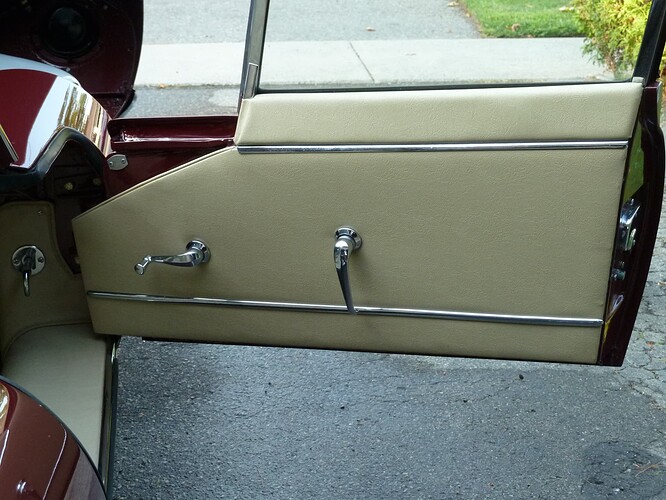 Could be that Terry’s just discontinued carrying them.

If you are good with an Exacto Knife you could buy the stock at an upholstery shop and cut your own, using the Masonite one as a template. My recommendation though, would be to go to OSJI (or another supplier) and buy them pre-made.

John, I learned more this morning. I spent yesterday trying to install the panels. Big problems were
(1.) The chrome on top and front of the panel was too tight for the card to fit, so I spent a lot of time with progressively larger drill bits (hammered sideways into the groove) to open it up. I got one side to ft.

(2.)Next problem was bending the masonite. I got it all fitted but the panel popped out because the clips on the front and bottom were insufficient to withstand the force of the bent panel.

(3.) That takes me to purchase of the plastic sockets (SNG Barratt-but they are not shown in the catalogue. If you request it online by p/n, it will show,)

I finally called OSJI and spoke with a great guy I have dealt with over the last 25 years through three OSJI or Bartlett E Type interiors.He said the 1/8 inch masonite was used in the early days and was a real problem until they went back to regular door card material. He said he has pulled the upholstery off the masonite and sanded the edges down to fit the chrome on top. He offered to modify my panels for me if I sent them back. We talked about bending the masonite and he said he scribed the back to control where it folded and then bent it over a table edge. I told him about the plastic cup receptacle and that the seller (SNG Barratt had said it made the card fasteners hold much tighter and kept the cards from rattling (???) my OSJI contact said they only went on the bottom and were to keep water out. So I am busy boxing up my door cards and sending them to Muncie. I am more impressed each time I do business with OSJI.I will not be surprised if I get a new set of cardboard door panels.

I’m re-doing my door cards now. I went with 5 mill ply and marine vinyl from Joanns fabric store, a surprisingly good match of grain and color, black. The plywood and vinyl are both thicker than original so there will be work to do

Clive, what color is that?

Light Beige. It was the original color on my '62.