My name is Jannik and I just got myself a beautiful 1992 XJS coupe. I had a few Mercedes (W126 & W123) before and still have a Porsche 944 in my garage but I somehow fell in love with the XJS when I was living in California. Now, a few years later and back in Germany, I found this beauty in Sweden, bought it and had a fantastic road trip back home. 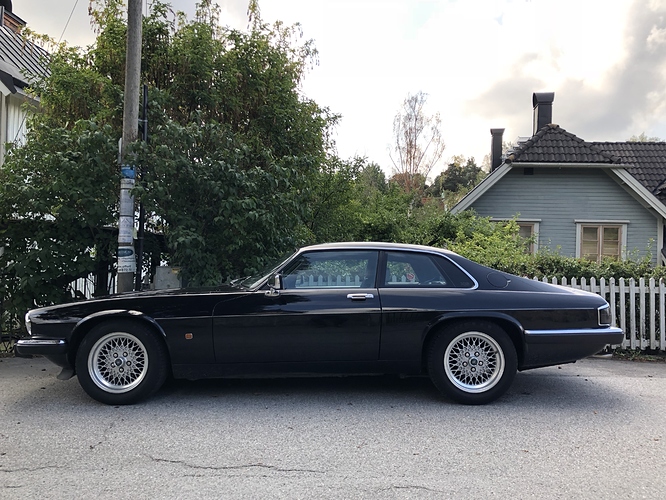 The day I got back the passenger door refused to unlock. It tried the remote, the chrome switch on the inside and the key. Nothing worked, nothing moved, it was just stuck. Yesterday, after an hour of trying over and over again (and lot’s of swearing) the door finally unlocked so I could remove the door panel.

I put lots of grease everywhere and now it works. But it still feels like something is wrong and it could get stuck again.

You can’t move the chrome switch all the way to the right (sorry, I’m new so I’m only allowed to post one picture): 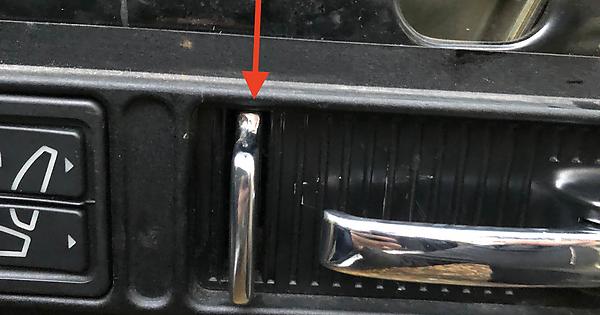 I untied the connection to the key lock and to the chrome switch to find out if it’s one of them. But even when I move the mechanism manually inside the door there is some resistance at some point.

I couldn’t find out what is causing it, but this spring looks weird to me: 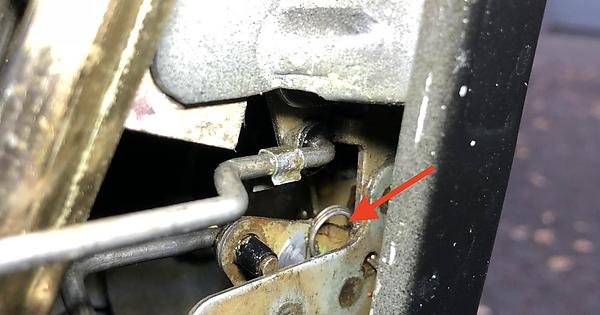 Do you know if it’s supposed to look like that? Or do you have any other idea?

I dont have an answer, but my doors arent locking, and Ive never heard the electric lock sound on my 93 convertible even when using the inner switch. I had my door card off yesterday and noticed the exact same spring! I thought “Hmmmm that looks weird!” I had shot a little wd40 in it, just to try to get it a little cleaner, and I toggled the inner switch back and forth several times. To my amazement the lock went “gzzz gzzzzt” I did it a few more times and it still did it. I am wondering if my electric lock mechanism is frozen from non use.

I can’t answer your questions directly, I never messed with the door lock, but it seems to me you need to find out if the issue is with the lock mechanism jamming or with the solenoid.

I’m attaching an excerpt from the parts manual. Only one clip (13) is shown but all rods use them. No spring is shown, but since Jason has that spring, it is probably an anti-rattle addition that came after my parts book was published. Hard to tell how that spring is held in place from looking at your photo. If it were easily removed, that might allow you to see if it is the problem…

If you can, you might try disconnecting the rod (15 in my illustration, upper clip & rod in your photo, just to the upper left of the arrow head) from the handle swivel, then actuate the inside door lock lever to see if the solenoid moves the rod (15) sufficiently/appreciably when the lock handle is actuated. That would tell you if the solenoid (16) is functioning. If it is, then the issue is probably in the lock assembly (14) or the rod (15) is catching on something that keeps it from moving when in place. 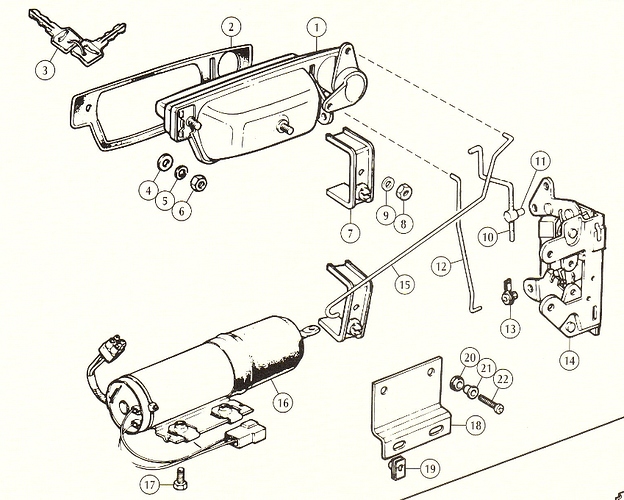 I have too many Jaguar XJ’s several XJ-S’s and even more XJ6’s I haven’t had any issues with the locks on the XJ-S, but it’s a constant theme with the XJ6. The spring never caught my attention, so I really can’t answer that question.

I can offer advise on how I fixed the locks on the XJ6’s which is the same mechanism the rods are just shorter.
I’ve done like you, taken the panel off, then starting at the chrome lock switch, disconnect the leaver mechanism in order to determine where the sticking is occurring; then work my way to the latch on the edge of the door. lubing and adjusting the rods as necessary in order to get the mechanism to work.

Here’s the problem children in order that I’ve encountered.

It’s been my experience the above 4 steps have kept all 4 doors as well as the boot functioning.

Hope this helps a bit.

Awesome man! Thanks for the tips!

I had that happen to me a few times.
What happens is, the door is not closed completely that paddle gets stuck.
The way I fixed that was:
Push the paddle to the unlock position as hard as you can
At the same time, you need to PUSH that door open as hard as you can.
The problem is that you need to do this from the opposite seat.
Mine did that every time someone let the door close, instead of giving it a push.

What happens is, the door is not closed completely that paddle gets stuck

I’ve also had this happen on my XJ-S. I used a 1/4" socket to push it where it was supposed to be. This happens a lot on the '70 Camaro. and it has a really stiff spring.

Thanks for your replies! My company sent me to Australia on short notice so I won’t be able to work on the car for a few weeks. I’ll try as soon as I’m back and will let you know.

Man! I wish my company would send me to Australia on short notice! Lol!

Mark, I used to own an '89 XJ6. Loved the car but I had a constant battle with the door latch/lock mechanisms.

My Jag mechanic wouldn’t touch the latches because he said he’d get them working but customers would keep coming back and accusing him of shoddy work, expecting him to fix them again for free (and they are time-consuming work). So I worked on them myself, adjusting rods, replacing solenoids & door handles, etc, etc. I even wrote a photo-illustrated paper on the subject to assist others on the Jaglovers XJ6 forum.

One time (of many times) I spent the better part of several days working on all the locks/latches and thought I had everything perfectly sorted, they all worked fine; the next day I went to the train station to pick up visiting friends and found that only the driver door would open. One friend had to climb between the front seats to get into the rear seat. Aaaarrgghh! That did it, I fixed them again, but eventually sold the car.

Hi. I have just returned to this excellent site after a while away and noticed your problem which sounds similar to one I had some years ago with my 95 4ltr Celebration. Have you now resolved your problem? Cheers Richard.

I have a similar problem. 95 convertible passenger door locked - wont open inside or with lock. The inner door handle sort of sticks out sometimes and has to be pushed in to close door. Now paddle will not move forward, even with lots of force. So - something binding where paddle and door lock rods meet lock mech. As I can’t get door card off easily (door is shut) what are the odds of reaching mech by using wedges in window opening to work/lube mech rods etc?

Well, since its a convertible, maybe you could remove the front seat to make the door card accessible.

I vaguely seem to recall there’s a way to unlock the door by removing the outside door mirror and accessing the lock mechanism through that hole, but I couldn’t find much info on that. check this:

In reply to a message from jagwit sent Wed 18 Mar 2009: Philip, Yes, take of the door miror, and you should see the back side of the lever, yuor in. I have done this with RHD cars, so I will assume the LHD is the same, bearing in mind that the 2 mirrors are in different positions on the door, so that the ‘‘passengers’’ mirror can be seen without obstruction of the 1/4 vent window frame. Took me a while to figure that one out on my '85 many years ago. Grant Francis Downunder– The origi…

Check the battery. Oddly enough, sometimes a wonky door lock is the first sign of a failing battery.

The solenoid is fine. 100% something is binding and I’m not quite sure how to get to the binding point, at the end of the two rods which come from the inside door handle and paddle lock. I was going to attempt to remove as much of the door card that I could, but it seems that using wedge(s) from the top with glass down seems more logical (slim jim method). I was hoping for conformation on that.

I have the same problem. How did your solve yours?
Regards,

Wow. Congrats, looks like a carboy copy of my Superblack (if the interior is black too).

Come to think of it, better look thoroughly under it if you haven’t already for rust, in case it is a little TOO much like Superblack.

The solenoid is fine. 100% something is binding and I’m not quite sure how to get to the binding point, at the end of the two rods which come from the inside door handle and paddle lock. I was going to attempt to remove as much of the door card that I could, but it seems that using wedge(s) from the top with glass down seems more logical (slim jim method). I was hoping for conformation on that.

I was going to mention that something not shown in Wayne’s drawing that might be important are the pair of adjustable rods that cross over the inside of the doors between the inside handle and the latch mechanism. You twist one of them either direction to adjust the “lock” and the other rod to adjust the “unlock” positions, if that info. helps any.

As mentioned above it looks like door lock solenoids (also known as servo) there are two types, both failing over time. The only present position sensor is inbuilt into solenoid. When it’s stuck - the universal way to overpass it (let’s call it temporary fix) is to put both (all) doors in shut position and unlock from outside with key (driver’s side). Haven’t seen that method working with remote but who knows…

In my case, I pulled the rubber door trim back a little at the top back side of the window opening (with window glass down). Then I sprayed penetrating oil down near the lock mech. After a few times the lock reopened.