In a recent thread on the Saloon forum I said:

Next week the “Brigadoon” group is gathering once again in South Jersey and I will be taking my 52 XK-120 FHC, gonna be quite a ride.

Last Friday, Adrian Curtis, my brother John, and I took off in our 120’s from the Boston area and headed to Mike Eck’s house in South Jersey for the 18th gathering of old Jag friends known as Brigadoon. We primarily took highways, went over the Cuomo Bridge, and wound up on the Jersey Turnpike for the last leg of the trip. The total distance on Friday was 360 miles for me, 420 for Adrian (he came from NH), and 340 for John. We all met at Westboro Plaza on the Mass Pike at 7 AM and started the journey south.

We travelled at 70-80 MPH with occasional runs at 85, pretty much demanded by today’s traffic. Our cars had no problem with that pace, both my car and my brothers have B heads and run comfortably at that speed and RPM. Adrian has a standard head in his 53, but still had no problem. We all have 3.54 Salisbury rear ends which run 3500 RPM at 79 MPH, according to Waze software. No problem.

The main weakness of the car is the brakes, we all have standard drum brakes, which are adequate, but nothing like today’s antilock disc braking systems. So we left room between the cars and the car in front of us to avoid catastrophe.

In total John and I covered 775 miles in three days, Adrian covered 1000 miles. The Brigadoon event was on Saturday at Mike’s house and there was no significant driving. Old time List contributors Rick Holland, Rich Neary, John Brady, Adrian Curtis and Mike Eck were all part of the gathering, and we traded many stories and experiences. Here is a picture as we arrived on Friday: 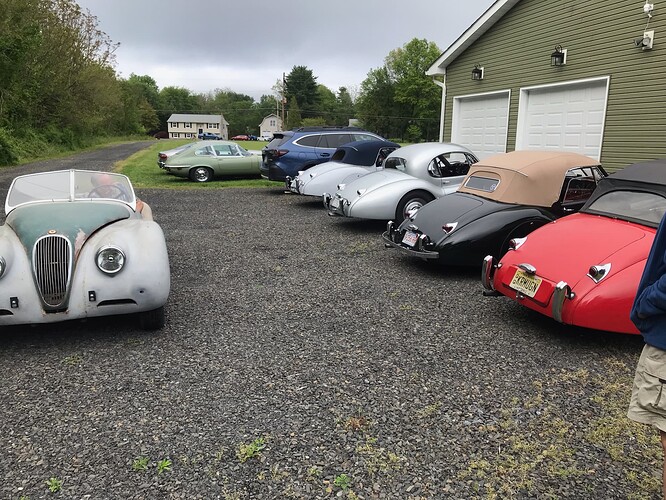 Mike Eck’s 120, which he bought in the 70’s is on the left, Rick Holland’s is the red one, which he bought in college and drove across the country in the early 60’s (it still has a sticker on the window that he got while driving through Mexico). Adrian’s is the blue top DHC, my brother’s is the tan top DHC, and mine is the FHC.

Here are the cars at our rental house: 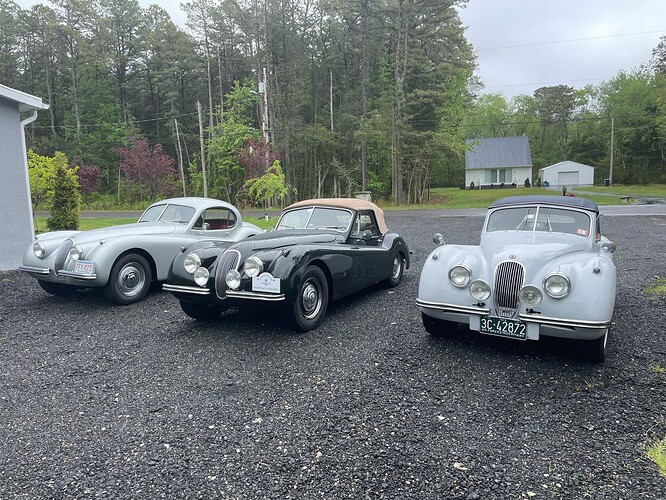 This was the first real test of my FHC on a trip over 200 miles, the longest distance I had previously covered in three seasons of driving it. It performed with no issues, got 20 MPG, burned no oil, leaked no coolant, did not overheat, and the engine remained clean, having front and rear crank seals. We drove in some rain, the wipers worked fine, and the windscreen leaked (which I will address).

Here is a picture of the gathering on Saturday, Mike invited the local Brit Car Club, and a few people came in spite of the rain. 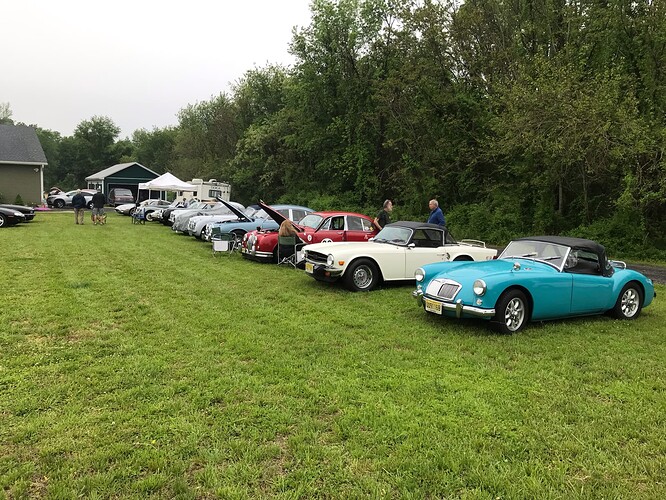 I wore noise cancelling headphones, my FHC has dual exhaust and would have been unbearable on a trip of this length. I now have confidence in my car and have really developed an appreciation for anyone who really drives these cars. It’s a great experience, creating a stir every place we stopped. No jokes please about the enclosed trailer, a mower crew was working there. 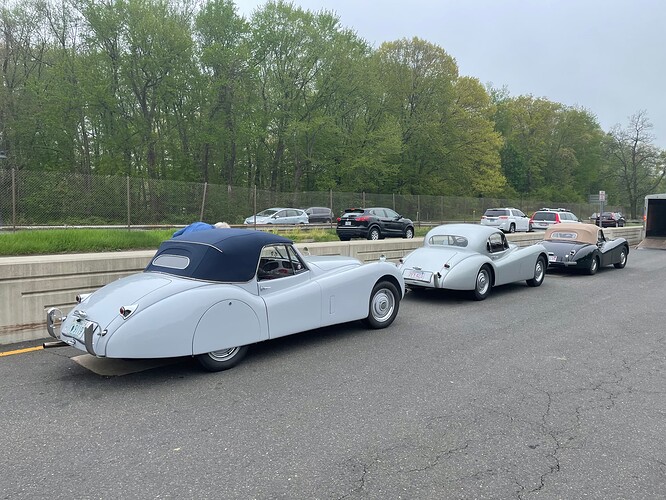 I look forward to my next long trip, and will share my experience once again.

how fun…great to drive these cars. They are looking great. Curious as to what your actual rpm was on the road…at say 60-70 …and the tires on your cars…
Nick

What a great event and beautiful cars. I’m hoping to find similar groups/events in Southern California.

This is lovely, these stories about trips with these great cars, make us all travel with you. Thanks so much.

Hi Nick,
My brother and I are running P205/70R16 Goodyear Eagles, at 35 PSI. They have the matching diameter of the original Dunlop Road Speeds but are radials and have a much wider contact patch. We were running 3000 - 3500 RPM with occasional stretches at 3700 RPM (85 MPH).

Just goes to show that even at the age they are the engines can still run at those levels of RPM, after all they were developed to run at 100mph for 7 days straight.

SO…about 28.0 diameter tire? Radials squish when loaded at contact a little more than the bias did…it would be interesting to know true loaded diameter (I put a 1x2 wood slat across the top of the tire and measure from its underside to the pavement.) So 3700 was 85mph. What was rpm at 60, 70 if you recall or noted. 3.54fiff??
I am making notes as I may fiddle with my tires/and diff ratio.
Thanks
Nick

What an absolutely excellent trip! Thank you so much for that.

The guy who bought Tweety offered me the chance to drive it across the country to the port of New York: he was a bit incredulous when I said I would have zero problem driving the car that far.

He asked, “is the engine up to it?” I told him that properly built, properly maintained, the XK engine was as good as any, and better than most of cars of its period. That still true.

Guys, note the most amazing thing, Tom’s engine didn’t leak a drop of anything. AFAIK, this is one of those “I’ll believe it when I see it,” accomplishments.

Tom, does your gearbox leak a bit from the shift rods or anywhere else? If not, you have achieved the dream!

John, yes my motor remained clean, not dripping oil or streaming it backward (coating the underside of the car) from a rope seal up front and a scroll on the back. I have lip seals on both ends. These are really great improvements to the original engines, and I paid attention to of all the other leak points on these motors and made an effort to seal them. My transmission does drip a couple drops after use due to the lower rear bolts on the back housing not being properly sealed. These bolts actually penetrate the cast iron transmission casing and have lock washers instead of copper sealing washers. That is a leak path which I will address, The shift rods have been sealed up with O-rings and a custom made heavier aluminum plate to hold them in place, replacing the light duty original one, a signature Steve Turschmann improvement.

John, yes my motor remained clean, not dripping oil or streaming it backward (coating the underside of the car) from a rope seal up front and a scroll on the back. I have lip seals on both ends.

Interesting. I used to work with a chap who worked at the Wellington Jaguar agency that serviced Her Majesty’s fleet. He told me that they periodically refurbished a Mk9, (among others) which included engine and gearbox work, and the Service Manager insisted that the car must sit on a hoist overnight with brown paper below and show no signs of leakage. This in the ‘70’s. I don’t think they were doing seal upgrades then, just careful assembly. It was also apparently not unusual to come to work in the morning and find a cylinder head you had been working on completely disassembled, The Principal would often come in during the evenings and check the apprentices’ work; if 1 tappet was incorrect, she would disassemble the entire head and you had to start again.

The Principal would often come in during the evenings and check the apprentices’ work; if 1 tappet was incorrect, she would disassemble the entire head and you had to start again.

That would have been the redoubtable Sybil Lupp

Indeed, a remarkable lady. One rainy Saturday, I was in the workshop and Sybill came in, in her S3 OTS, raised the bonnet and started tuning the Webers, claiming it was missing slightly at 150 on the motorway! This in pouring rain.

They are inexpensive, modern and quiet radial tubeless tires and readily available. T speed rating (118 mph).
They are found on some models of BMW in the run flat version.
We run them at 36 psi which is normal for modern tires. No discernible “squish”.
They are mass produced and accurately made and can be trusted for high speed driving such as we do on these trips.
They track straight as an arrow and handle nice under normal driving conditions including the occasion (incessant for Brigadoon) rain.

Well that’s no big deal before the car has been started or run 500 miles. My rope and scroll seal didn’t leak either at the beginning.

True, but I do believe the car had been road tested prior.

Hi all and Tom,

Hopefully this is not highjacking, but putting some more posts on really using the XK.

We took our 54 to a 400 Km tour this week end for the Rally of the Three Societies here in The Netherlands, near Appeldoorn. For us roughly 100 Km drive, 250 rally and 100 back. 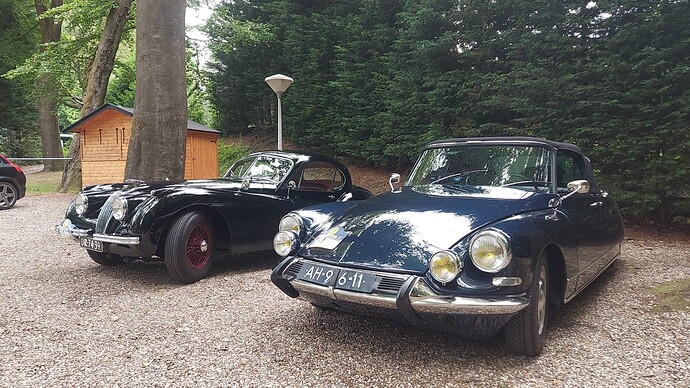 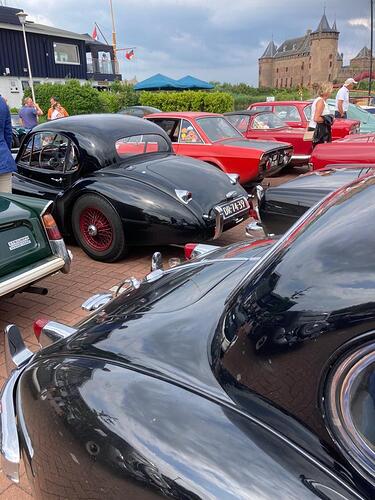 The experience was wonderful: extremely heavy rain on the way there, and then a lovely hot driving day with lots of sun. Waiting for a time control we had a minute of vapour lock, but then nothing, it was simply simply perfect.

It was so satisfying driving the car back in the garage, late evening yesterday after finishing 20 something out of 77 in the tour category.

Begs to be driven…

Begs to be driven…

With very few exceptions, I think it is a travesty for any car to not be driven the way it was designed to be driven. Great to see these posts of people like you who take these things out, put them through their paces, and use them as intended!