I went to the British Invasion last weekend in Stowe, VT and took my 52 120 Coupe for the first time. I have taken a MK 9 for many years, which has plenty of room for my wife and all our cargo. She could not attend this year so the 120 was my choice. Fellow 120 owner Adrian Curtis accompanied me in his 120 DHC. We stopped for lunch in Woodstock, VT, our usual stop. 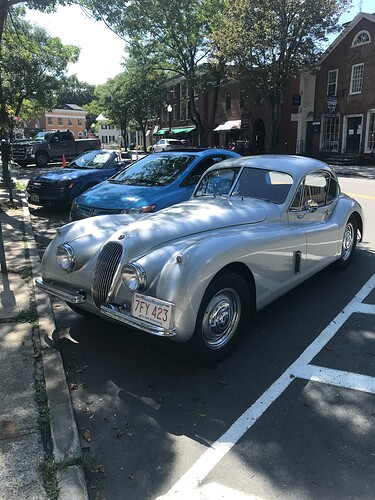 After lunch we we took Rt. 100 north which is a twisty mountain road that follows a river and goes through parts of the National Forest. It was a great mildly spirited drive.

We rented a suite in Stowe and enjoyed a relaxed three days with fellow Brit car fans, the smell of oil smoke and cigars wafted through the area. Around 500 cars attended this year, still reduced from years past, but those who attended were as enthusiastic as ever. Last year the Canadian border was closed, this year it was open, so it was great to see our Canadian friends once again.

The weather was perfect, no rain at all for three days, which is rare for this event. In years past we have encountered torrential rains, the remnants of hurricanes, and have sat in our cars while the event took place, just to stay somewhat dry. At 6:30 on Friday evening Main Street is closed down and Brit cars are backed in on both sides for a festival of cars and music. An excellent band plays in the very center of town, the Joey Leone Band, which has played for many years now. They played old classic rock continuously until 9:30 with no break, very impressive! This is Main St. 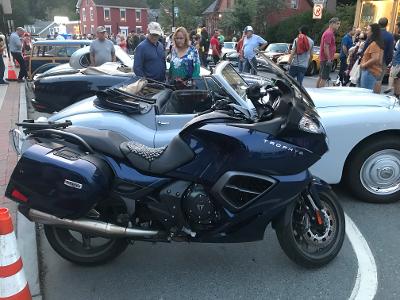 Saturday the field event takes place, and there were two 140’s and two 120’s, a reduced showing from the normal. And yes, my bonnet was open, the engine is just too spectacular to hide. 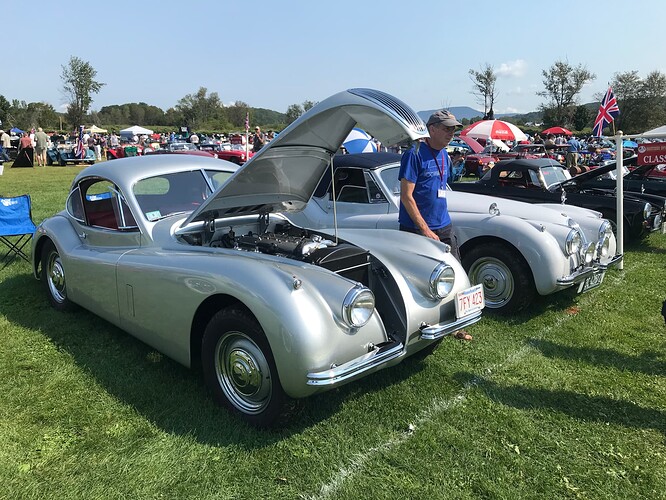 On the return trip I followed a friend in his TR-3 trough a beautiful set of mountain and rural roads along Rt. 12 south. Another great drive. We parted ways in Quechee, VT where he stopped at an antique emporium. I took major highways home from here. 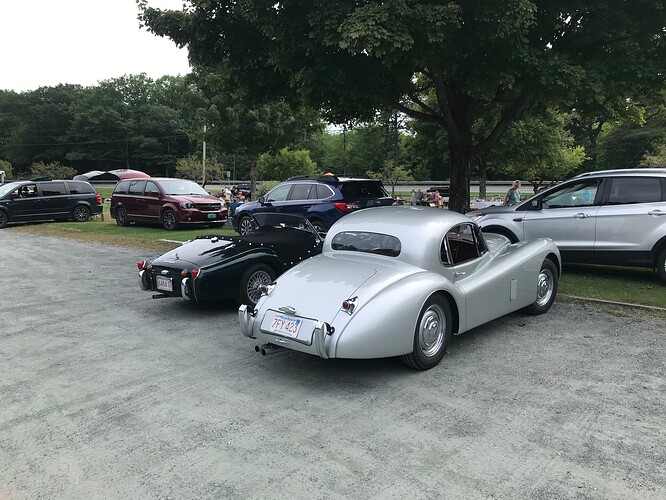 All in all it was another great event. I covered 554 miles, 2/3 of it highway driving at 70-85 MPH, and averaged 20 MPG, very good for an XK engine. I look forward to next year’s British Invasion and hope I see some of you there.

the smell of oil smoke and cigars wafted through the area.

I’m down with the Oil smoke, but the cigars would’ve driven me away right off the bat!

Congratulations to all members who did some long distance travel with their XK this weekend. It certainly takes guts, especially under the rain for some of you. On the other hand, we have to remember (I do) that back in the early 50s, there was nothing else to drive than cars not even having the somewhat advanced technology of an XK and people drove their cars all over the place.
A few years back, I was visiting the Musee National de l’Automobile in Mulhouse, France, known for its collection of some 200 Bugattis

.
Musée National de l’Automobile à Mulhouse - Collection Schlumpf (musee-automobile.fr)
when I spotted this Bentley on the parking lot with a UK registration, some 450 miles one way from the closest border with the UK. The car is possibly early to mid-twenties and doesn’t appear to have front brakes. Note the impressive amount of luggage piled up on the back of the car.
More recently, I found myself in Cornwall (UK) driving a modern car when, on a single lane road we had to share with sheep, I found myself nose to nose with a French registered XK120 FHC registered in the South of France (Nice or Cannes area), which meant these people had driven their XK at least 1200 miles one way!
I tip my hat to people who enjoy driving their classic car and are not afraid to go long distance.
With a little gut and good planning, everything is possible. 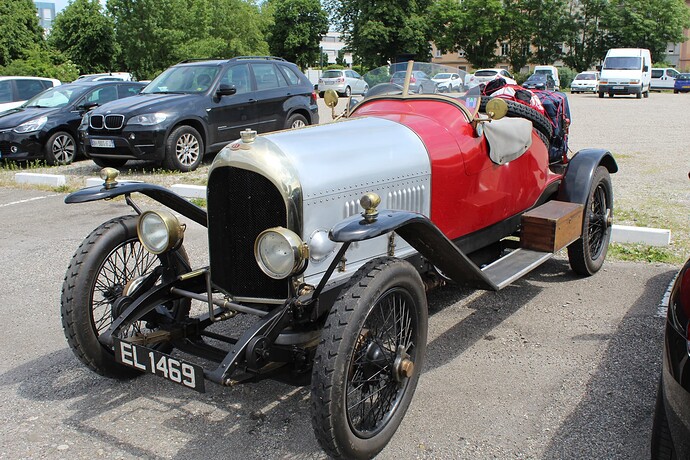 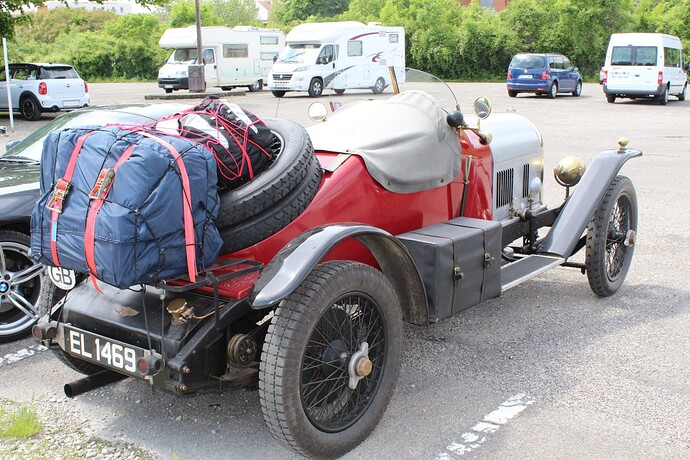 That sounds like a fantastic journey, and the fuel consumption, in case you have a 4-speed and usual end-ratio simply amazing.

I might take my XK to Spa, in Belgium next weekend, 250 Km from here.

Brilliant idea! Immediately added on the to do list. Thanks

That is most excellent, piloting a car of that vintage that far, not to mention they have internal fortitude beyond that of mine!

Sounds like a great shakedown for the run to North Carolina next year.

Mike, what is happening in NC next year pertinent to Jags?

Unfortunately I missed the BI this year due to family commitments. But I will be back next year and contributing to the plume of cigar smoke around the 120 parking area as usual.

Because I didn’t make it, I only have 1750 miles on my 54 XK120 DHC this year (so far). Here is a picture of it at the JANE dinner at the Larz Anderson Motor Museum this year. 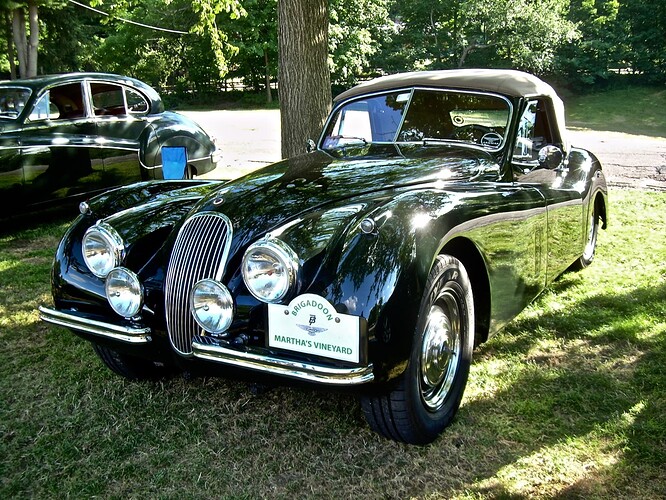 Seeing, much less smelling a plume of cigar smoke would make me give wide berth to any marque…

John, what’s the story with the rear spats? Dealer/ owner mod? I’ve never seen this on the other cars except mention of prototypes in Viart’s book.

Nice to hear from you.

So these spats came with the car when I got it in 1974. One of them has the correct matching body number of the car so it is original. The other one does not match.

I got the car in 74 and it had 1964 plates on it which I still have. So, it had only a 10 year driving life. It had just over 60K miles on it when I got it. I found out who the original owner was and believe it or not, I tracked him down on Long Island and actually talked to him. I asked him about the spats and he said they were full spats when he owned the car.

So I have determined that the spats were modified by one of the subsequent owners. I have been told that there was a service offered back in the fifties to cut out spats like this and an ad appeared in Car and Driver, or Motortrend or some period magazine.

They are quite different than the factory offered version which look quite funky to me. The metal was cut out and the raw edge professionally rolled around a wire bead to give it strength. I really like the look and kept them when I did the restoration.

I will send some better pictures later this week.

Great story, John. If it had been done to mine, I’d value it as much as you do yours.

Well, I can’t resist showing a couple of photos relating to a meeting in the UK this summer.

The Jaguar Driver’s Club Annual and Concours d’Elegance was held at Wappenbury Hall near Leamington Spa, the home of Sir William Lyons.

The black and white photo is a real period shot of Wappenbury Hall seen on the wall of the Jaguar Heritage Trust Collection at Gaydon, adjacent to the British Motor Museum.

These two exhibitions are definitely worth a detour for anyone visiting the UK.

The colour photo is 679265 at the meeting, parked outside the famous house, which is privately owned by a Jaguar enthusiast and not normally open to the public.

The E type will be instantly recognised as the Geneva Motor Show car, here parked outside the Jaguar Heritage Trust Collection. 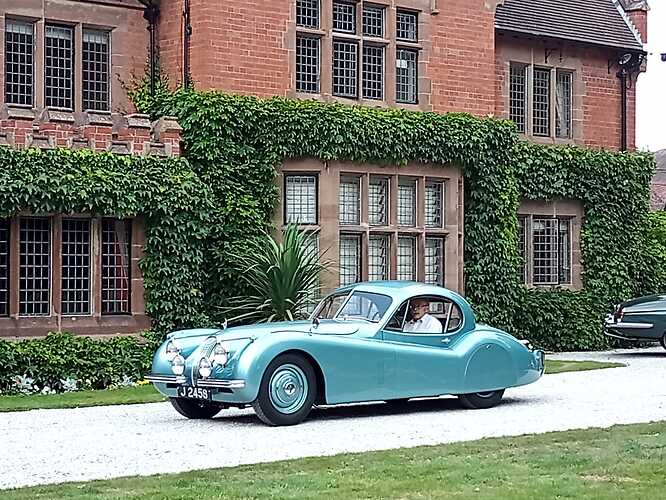 Am I right to think the Xk120 FHC carries a Jersey registration number ?

An interesting detail in the B&W period shot, you can see the tail end of one of Sir William’s prototype mockups, when he was considering a more Italian mode for the XK140. The whole car is in some of the history books, such as “Jaguar Sports Cars” by Paul Skilleter c1975 photo spread between pages 138 & 139.

Am I right to think the Xk120 FHC carries a Jersey registration number ?

ps the really sharp eyed may see in the centre photo above the rear end of the Mk X which was Sir William Lyons personal car 7868 RW. 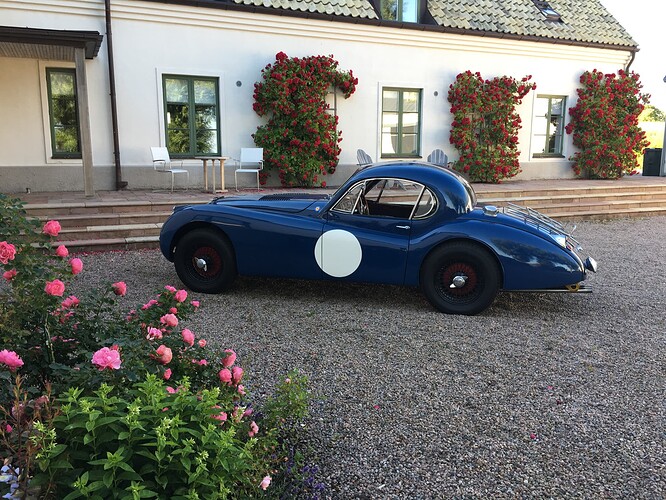 Hi Peder,
Covering 350 miles in a day in a 120 FHC is quite an experience. Especially on highways with long periods of time at high speed. I found that my right leg is cocked at an unnatural angle and took advice from my brother to support it against the tranny hump with a folded up towel, which really helped. Getting out of the car and walking around every hour and a half or so also helps.

I found driving on twisty mountain roads requires braking and shifting and the legs get much needed use, and I found that to be much more enjoyable, as in my last run to Stowe, VT. Driving them is their whole purpose.

BTW, your car is beautiful and unique, especially with that Fog Ranger rear lamp. And I notice you still have drum brakes, that really adds to the overall period driving experience.